Today’s guest picture is a Spanish bench.  Dropscone doesn’t reveal whether he actually sat on it or merely photographed it during his recent holiday in Majorca.

There was no sitting around for me today after breakfast as I was anxious to get a short pedal in before the wind got too frisky.  It was brisk enough to make the start of the twenty mile trip hard work but, once again, it was coming from a direction which suited my route so I enjoyed myself.  I was too busy pedalling to stop to take any pictures.

I did walk round the garden when I got back and marvelled once again at the good value Mrs Tootlepedal has got from her packet of mixed cornflower seeds.

I also noticed a bee getting stuck into a nasturtium.

My chief business wasn’t looking at flowers though, as there was important stuff to be done.   The drying green, the greenhouse grass and both the lawns needed cutting and I managed to do the first three on the list before I had to go inside for a sit down.  The front lawn has had to wait until tomorrow.

After lunch, I pedalled up to the Auld Stane bridge and looked back up the road.  First a couple of quad bikes appeared…

…and then some bowler hatted heads…

…and finally some horses.

The rider in the centre of the front row is the young man who has been elected by the townspeople to be cornet for this year and carry the flag round our common land on Common Riding day.

This was the first of several ride outs which take place in the week before Common Riding week.

The cornet was escorted by over fifty mounted followers…

… and they turned off the main road and headed for the hills.

They were bound for Bentpath, six miles to the north of Langholm where they would sit down to speeches, songs and refreshments.  Much later in the day, they will return to Langholm, coming down into the town from the Castle Hill ridge (which appeared in yesterday’s post).  They will be tired but happy.

I went back home and enjoyed the last kilometres of another stage of the Tour de France and then, rather than mow the front lawn, I  set out for a short walk in pursuit of a flying bird of the day picture. Our feeder is not up at the moment.

I paused to admire Mrs Tootlepedal’s ‘back garden’ along the dam at the rear of our house. 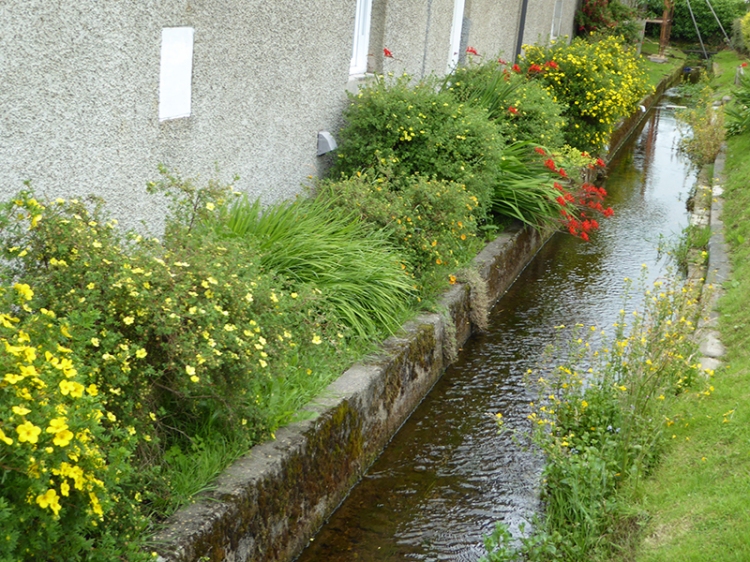 She has got three varieties of potentillas, mixed with crocosmia, alchemilla mollis and fuschia to brighten up our rather grey wall. 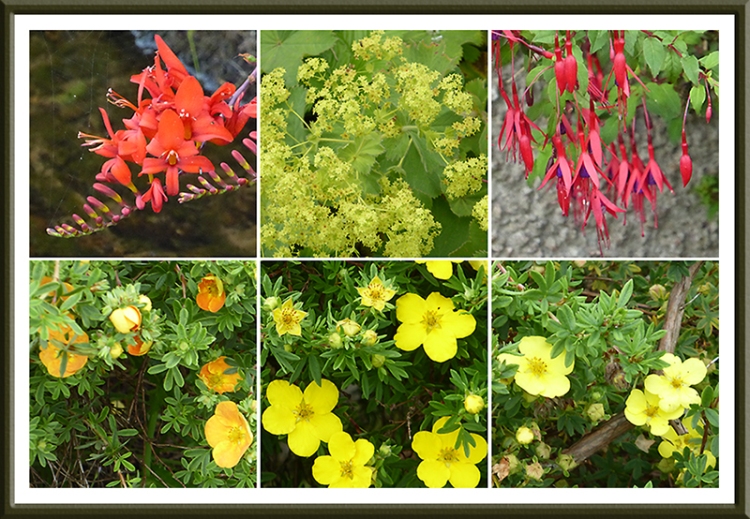 It wasn’t long before I saw and heard a flying bird.  A gull was being very vociferous as I walked down past the church…

…and on the bank below, Mr Grumpy was looking rather small and harassed.

The two things were connected.

There were two gulls harrying the heron.  I don’t know what he had done to annoy them but they were certainly annoyed.  When I got nearer, they turned away and Mr Grumpy took the opportunity to make himself scarce. 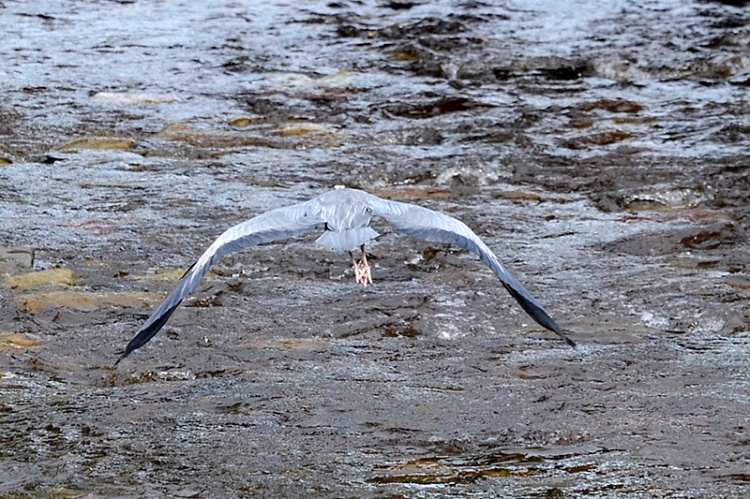 It was one of those days when there were flying birds to be seen on all sides, noisy oyster catchers high in the sky above and silent ducks low over the water below. 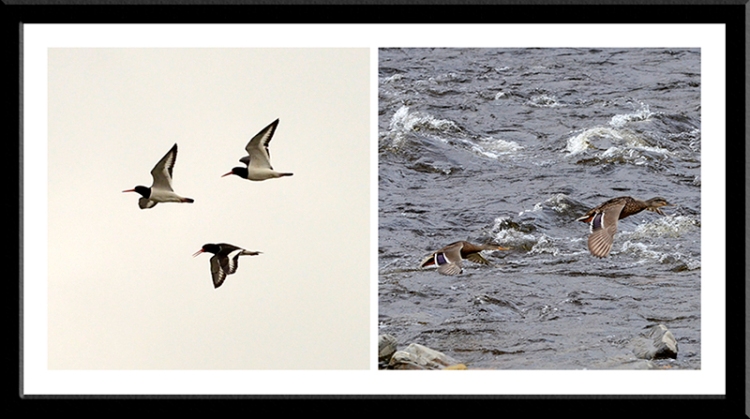 Some non flying birds were also to be seen on the banks of the river.  It was parent and child time at the Langholm Bridge 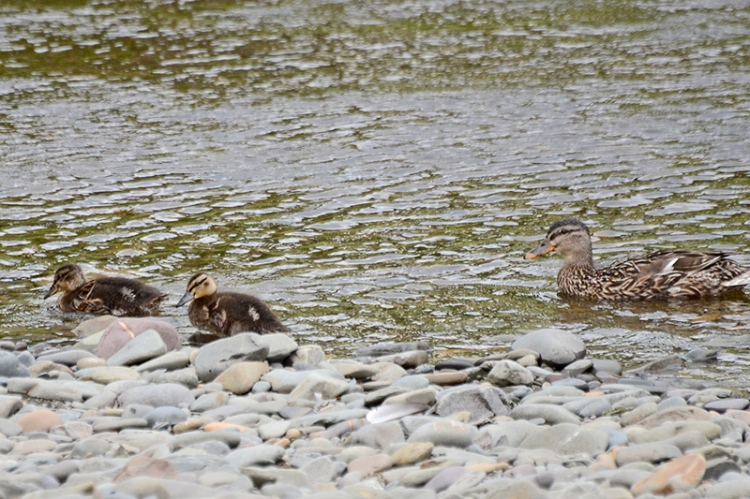 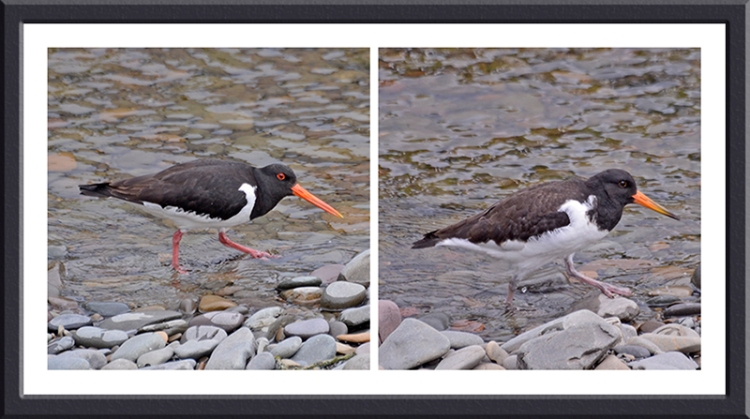 I crossed the bridge and walked onto the Kilngreen and was surprised to see Mr Grumpy pay a flying visit.

I think that he was hoping for food from a car which parked but when they didn’t open their door, he flew off.

I watched the black headed gulls circle about… 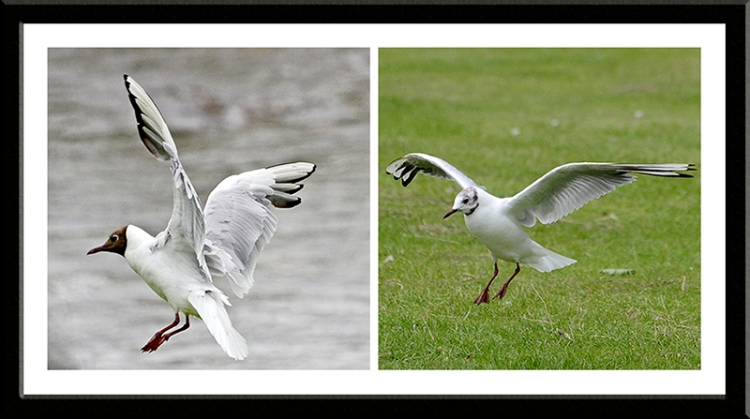 …and then I walked over the Sawmill Brig and up to the cricket ground where a match was being played.

Langholm were batting and at five wickets down, needed a good partnership from the two who were in.  They did their best….

…striking the ball in all directions…

…but it was an uphill task, especially as I heard a wicket fall as I was leaving the ground.

Mrs Tootlepedal picked some rhubarb, roasted it and shared the custard.  She is always ready to help me out.

Too many pictures already so no flower of the day today.

The vociferous gull should really have been flying bird of the day but it was needed for the storyline so one of the black headed gulls receives the honour instead.

30 thoughts on “No wonder he’s grumpy”