Today’s guest picture comes from Edward Winter, a blog reader from Sheffield who came to visit us not long ago.  He thinks that his version of Mr Grumpy is quite the equal of ours.  It is called Crazy Crane.  I don’t think it is getting enough to eat.

After our hot and humid day yesterday, it was to be expected that a little rain might fall and we were woken up by furious drumming on the roof accompanied by thunder rolling round the hills.

I did the sensible thing and rolled over and shut my eyes again.  By the time that I got in touch with the real world, the rain had stopped and we were able to go out into the garden to assess the damage.  Some things had stood up to the heavy rain pretty well.

Some were not too bad….

…and some had thrown in the towel.

I am a bit disappointed that Mrs Tootlepedal’s eryngium (Miss Willmott’s ghost) is grey and not blue but on close examination, I can see that it does have a bit of blue in there.

It was still pretty soggy outside so I went back in, got my hair cut by my resident barber and then hid until after lunch when the prospects were much better.  The clouds cleared away and with light winds, it looked like a good afternoon for a pedal so I got my cycling gear on and…..

…foolishly stopped for a moment to see how the Tour de France was getting on….

…and two hours later, I finally got on my way.  By this time the wind had got up quite a lot so it served me right for dilly dallying.

My joints were feeling the effects of clambering about on the hillside yesterday so I settled for a short, slow ride with plenty of stops for shots.

The Wauchope was showing where all the rain had gone…

…but the roads were dry and the sun poked through the clouds from time to time. As I went on my way down to Canonbie across the hill, I could look back to see the Monument on the top of Whita where I was walking yesterday. 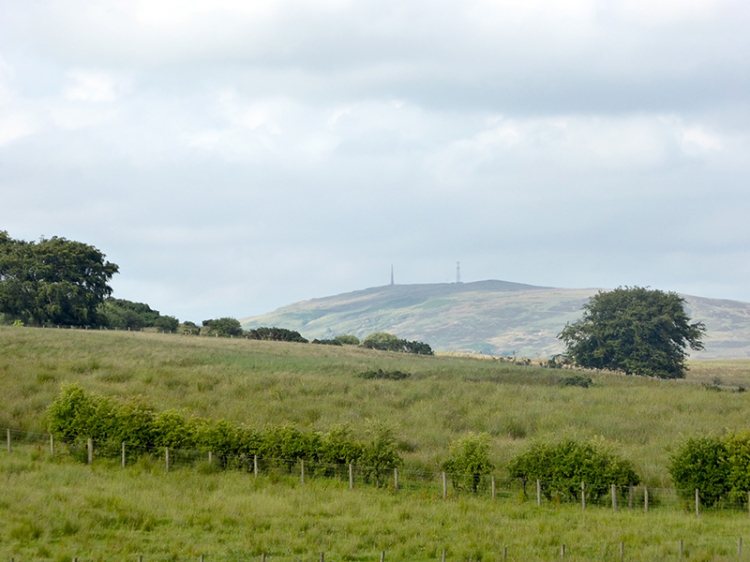 The tower to the right is a communications mast and quite ugly but we pretend that it isn’t there. 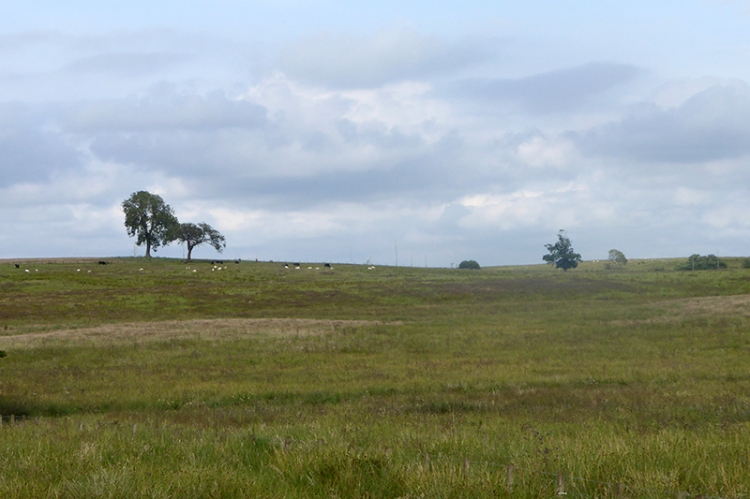 The second part of the route follows the River Esk from Canonbie back to Langholm.

I cross several bridges and I was looking at the lichen on one (as one does) and took a picture out of habit.  When I put it on the computer, I saw that there was an almost invisible fly on the lichen.  Can you spot it in the  left hand frame?  It’s there.

I passed Gilnockie Tower too.

It is a sixteenth century tower but it was fully restored in 1978 which is why it looks so neat today.

I parked my bike by a fence on the bike path and walked down to the River Esk a mile or two south of the town.

A bright flower beside the river caught my eye.

And there was something even more delightful nearby.

Nearer the town, I stopped on Skippers Bridge for the obligatory view of the old distillery.

And since I was in bridge mode, I stopped on the Town Bridge too.

You can see that the Esk on the left has much more water coming down it than the Ewes which shows how local the rain storm over night was.   We were lucky as there are  reports that “gobstopper-sized” hailstones dented cars at Eastriggs which is less than 20 miles away from us.

All in all, apart from the brisk wind, it was a surprisingly mellow day for a gentle pedal after the early thunderstorms.

When I got back, Mrs Tootlepedal was busy in the garden and I took a moment to admire the rambler roses on the fence beside the vegetable garden.

The vegetable garden itself is doing very well and provided runner beans for our lunch and then turnips, potatoes and broad beans for our tea.  Perhaps thanks to a lot of sunshine in June, the vegetables seem to be full of flavour this year.

The flower of the day is a moody shot of a clematis, taken just after the storm abated this morning.

And in the absence of a flying bird, last night’s full moon, taken before the rain came, will have to do.

23 thoughts on “Fairly calm after the storm”