Today’s guest picture is one from my brother’s archive.  He visited Roche Abbey in August and enjoyed this neat little bridge. 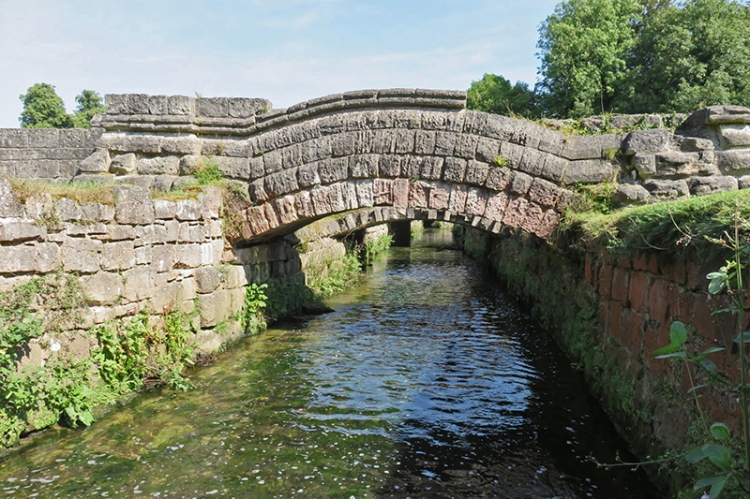 I woke up feeling a great deal better than yesterday but with a few aches and pains still in residence.  It seemed like case for Dr Velo and so after the regulation amount of footering about waiting for the temperature to go up a bit and eating toast, I finally dragged myself out into the brilliant sunshine, snapped a poppy (and friend)… 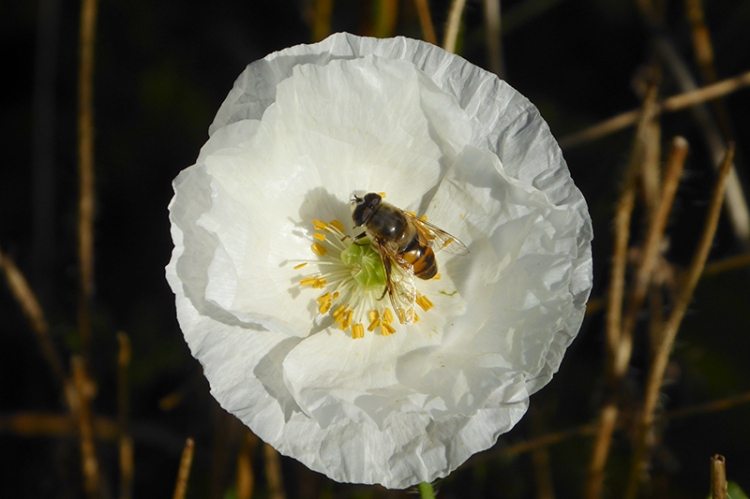 …and bicycled off up the Wauchope road.  It wouldn’t be true to say that there wasn’t a cloud in the sky….

…but for an early autumn day, things couldn’t have looked much fresher…

…and there was only just enough wind to make the Minsca windmills go round.

I dropped in on the doorkeeper at the Ewe Hill wind farm (where the blades that we saw being transported the other day were bound) and he kindly gave me a list of telephone numbers so that I can try to find someone who will let me visit the site when the towers are going up.

I pedalled on and crossed the bridge at Paddockhole and headed up to Corrie Common.  It occurred to me that I might be able to see the towers going up without visiting the site if i can’t get permission and I looked across to see.

I could see the ground being prepared behind the first array of turbines and the zoom lens was quite able to get close.

So if I can’t get permission to visit, I will still be able to see work in progress.

I pedalled on to the top of the hill and was reminded that we have plenty of windmills round about all ready.

I could see over forty turbines spread across the hills on the far side of the valley.  You can see why some people feel that we have got more than enough without adding to the number but I think that we can squeeze a few more in.

Looking out from the top of the hill at Corrie, there is a splendid panoramic view…

…of which this is just a fraction.

As it was a grand day and the light wind was behind me, I decided to head over the hills to Boreland and then come back down to Gretna.

There was plenty to entertain me on the way.

So I was in good spirits when I got to Gretna after 42 miles.  I was in even better spirits when I had downed a plate of egg and chips and a latte at the Old Toll Bar cafe.  The old toll bar is yards from the border so they kindly have informative clocks there for visitors… 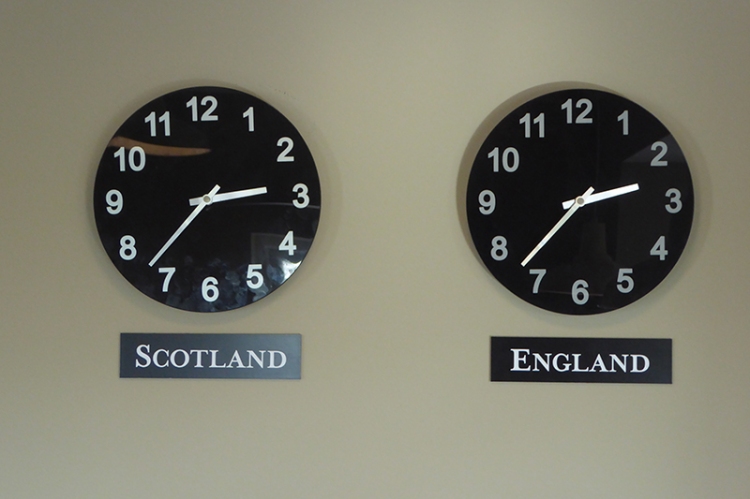 …and I was pleased to see that Brexit hasn’t upset this harmony yet.

I had originally planned for a ride of fifty miles and a spell of gusty winds winds as I came down the road to Gretna made me feel that even that might be hard work but as I sat in the cafe, the wind dropped back again to a very gentle level so I took a slightly longer roundabout route back through Glenzier.

I had just got to the A7, 6 miles from home, when a familiar sight caught my eye.  Scott, the minister and a friend had stopped for a drink at the top of the Canonbie bypass.  I had let an opportunity to join them for a hundred mile ride slip by and I was quite pleased when I found out that they had completed the 106 miles at over 16 mph. I would have held them up badly.  It was no wonder that they needed a breather before the last lap.

We had a chat and then I went back by a slightly different route than them. It gave me a fine view over the village of Canonbie…

..and a little further on, a look at the hills beneath which Langholm lies.

I arrived in Langholm just behind Scott and Greg and congratulated them on their achievement.  They had had to come back on their route home just when the wind was at its briskest so they deserved to feel quite pleased with themselves (and I was once again pleased that I hadn’t been foolish enough to offer to go with them).

Still, I was modestly pleased with my 62 miles even though I hadn’t got anywhere near their speed and those with time hanging heavy on their hands can see details of the route by clicking on the map below.

Once again Dr Velo had worked his magic and I was feeling absolutely fine.  I can heartily recommend cycling as cure for almost any ill though Savlon is very good too.

When I got home, I found that Mrs Tootlepedal had been extremely busy in the garden while I had been out pootling about.  She is revamping the bed in front of the hedge along the street.

The two azaleas have been replanted. 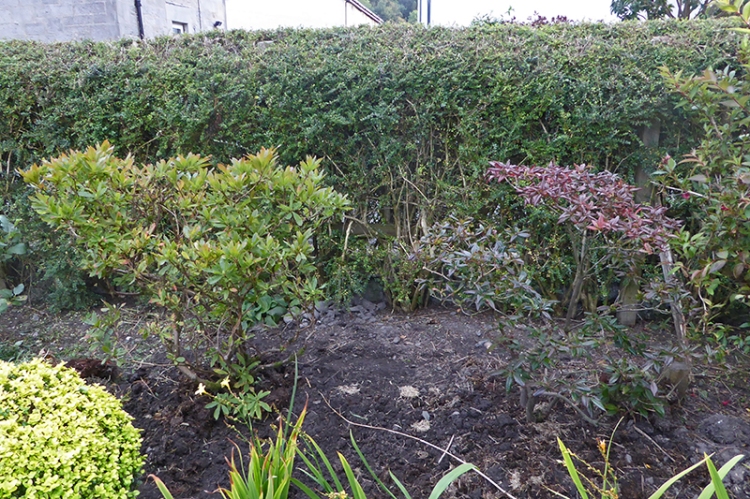 And everything nearby has either been rooted up or trimmed down.

She plans to line the bed with a colourful succession of daffodils, tulips, grape hyacinths, Sweet William, yellow crocosmia and poppies.  I look forward to many photo opportunities next year.

She added to her tasks by cooking a meal of courgette fritters for our tea and then we settled down to watch Strictly, both of us feeling tired but contented with our day’s work.

I didn’t have an opportunity to catch a flying bird but the flower of the day is a cornflower.