Today’s guest picture comes from my Somerset correspondent Venetia.  She has strayed as far from Somerset as Madeira and sent me this picture from the Mercado dos Lavradores there. 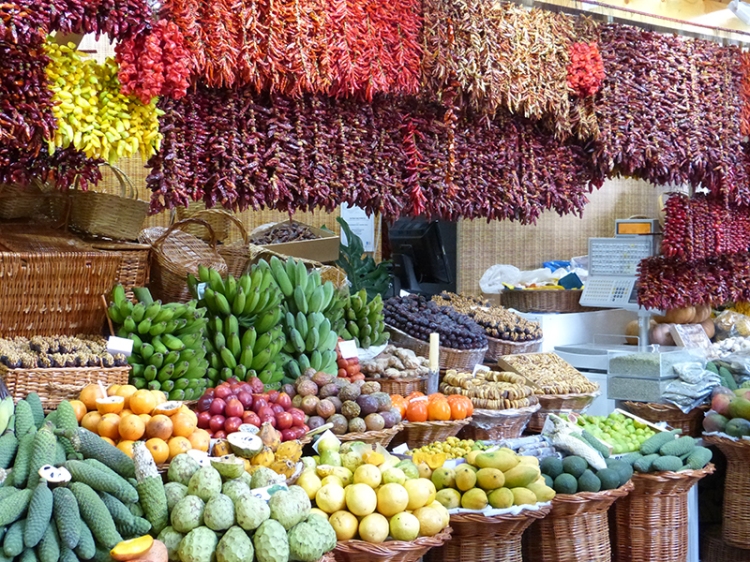 After yesterday’s very dank and gloomy weather, it was a relief to wake up to some friendly sunshine this morning.  As it was combined with reasonable temperatures, it seemed like a good day for a cycle ride.

I didn’t get off as early as I should have done because I spent a little time watching the birds.

I keep hoping that some waxwings will visit (they have been seen regularly in Dumfries 30 miles away) but there is no sign of them.  I had to be content with a blue tit above… 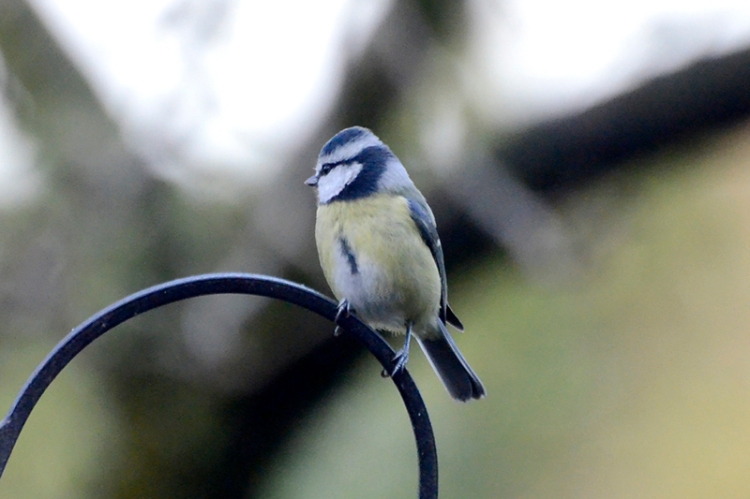 …and a blackbird below. 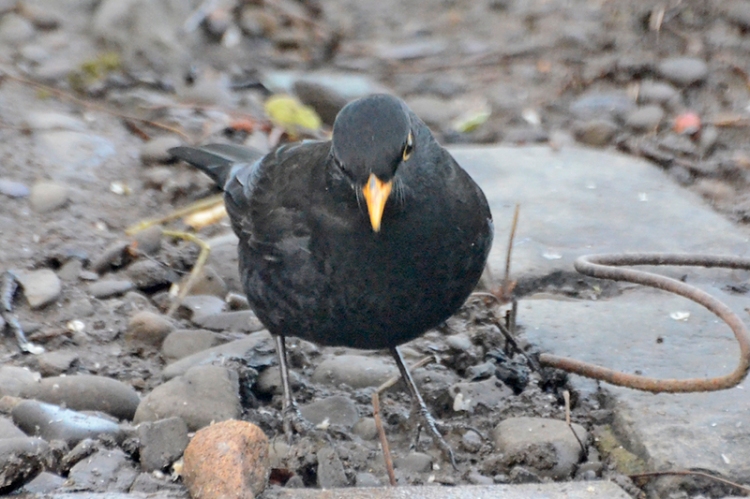 I was further delayed by the need to have another go at repairing my mudguard.  This required the removal and then the replacement of the front wheel but I was pleased with the result as the wheel turned smoothly.

By then, I needed a cup of coffee but I got away at last, stopping to buy two filled rolls and a couple of bananas from out local shop on my way.

The sun was shining, the larches were golden… 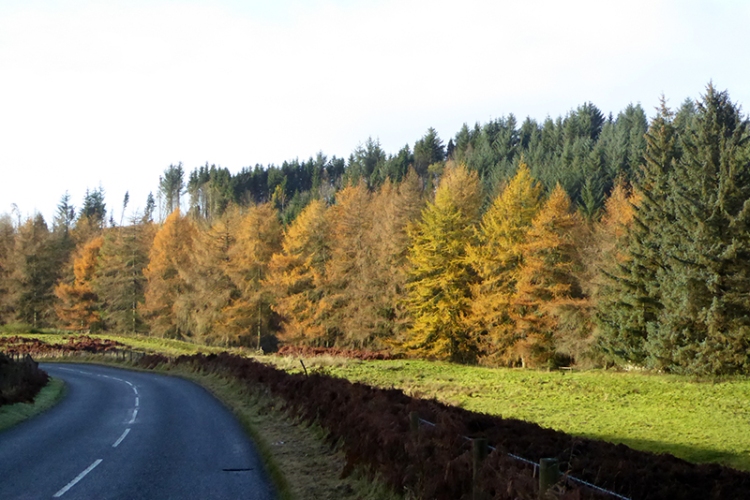 …and all would have been perfect if my mudguard wasn’t still rubbing.  I decided to ignore it rather than go back and start again and I managed to live with the noise for quite a few miles before a halt and a rather desperate attempt to sort the problem actually succeeded.  The rest of the ride was trouble free.

I chose a route that would take me past yet another wind farm under construction near Gretna. 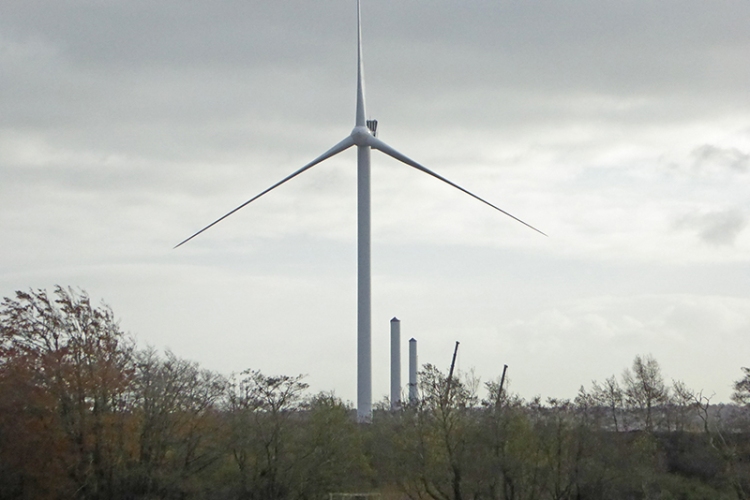 Most of our wind farms are up in the hills but this one is down near the sea on flat land.

I wondered whether the famously large (but invisible) moon would have resulted in a high tide and when I saw that the tide was in, I pedalled down to the shore at Gretna to have a look.  The tide certainly was high… 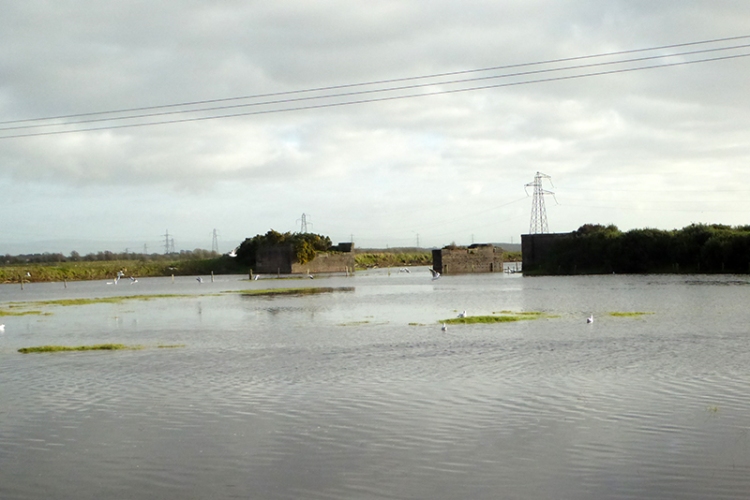 …and was lapping at the very side of the road.  I took a minute to eat one of the rolls and a banana as I watched some very excitable gulls having fun.

You can see from the fence post in the middle of the water how high the tide was.

From a few yards further on, I could look out over the Solway… 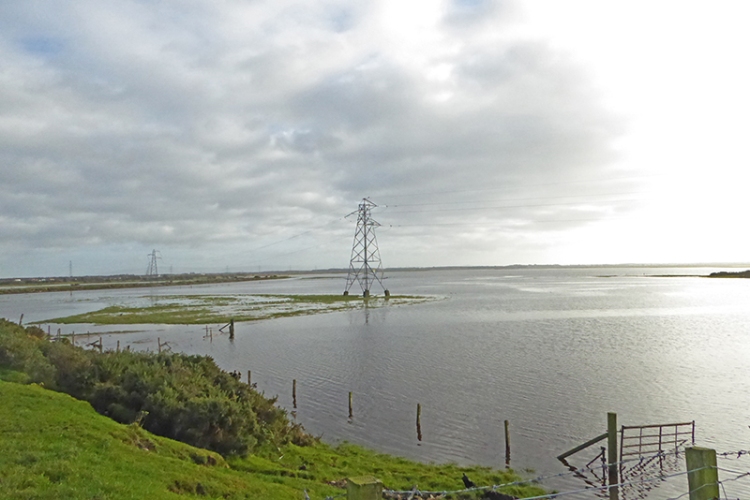 …which was gleaming in the low sunlight. 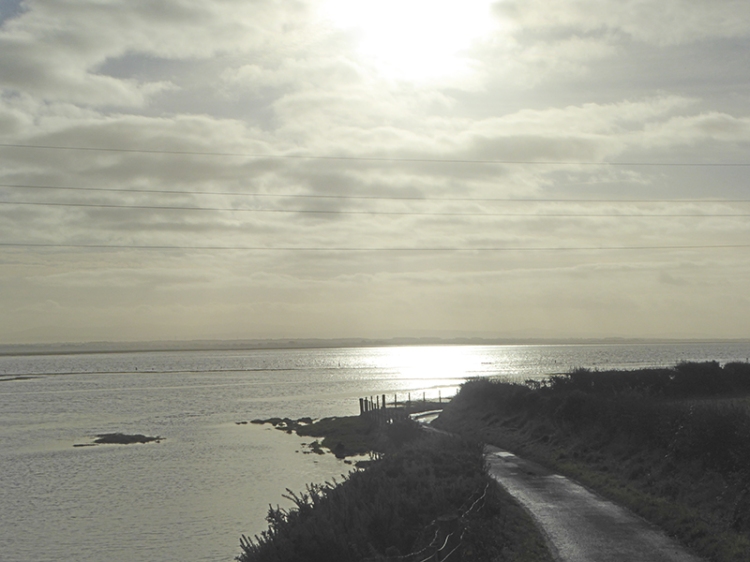 I cycled through Gretna and on into England, keeping to flat roads.  I did less climbing in 45 miles today than I did in 30 miles on my last outing and as a result, my legs were in much better humour.

England was looking very pretty and I thought that this view near Rockcliffe might be the best of the day…. 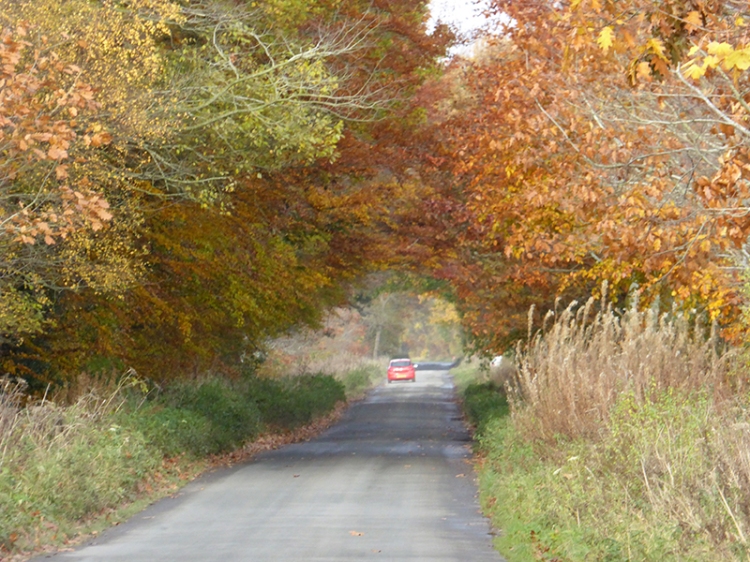 …until I saw this one a few hundred yards further along the road. 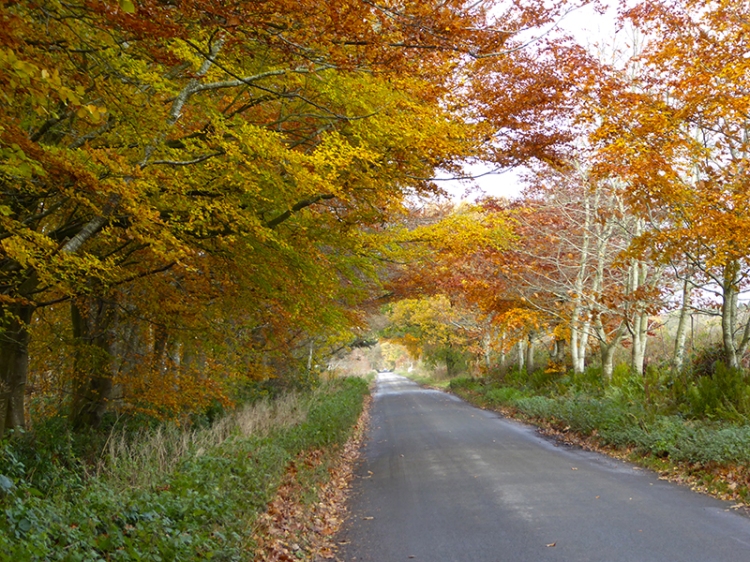 I made a loop that took me back to Gretna and then had to choose between a rather dull ride straight back up main roads with the wind behind me or winding back across country on a longer, more hilly and more adventurous journey.

Of course I chose the direct route and with the wind behind me,  rattled along very comfortably. 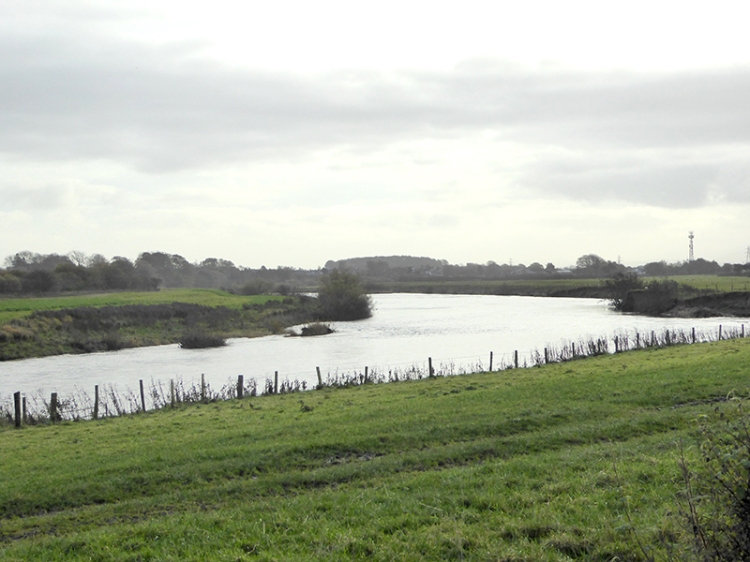 …and then made only one more stop to enjoy some very pretty young larch trees on the new road just outside Langholm. 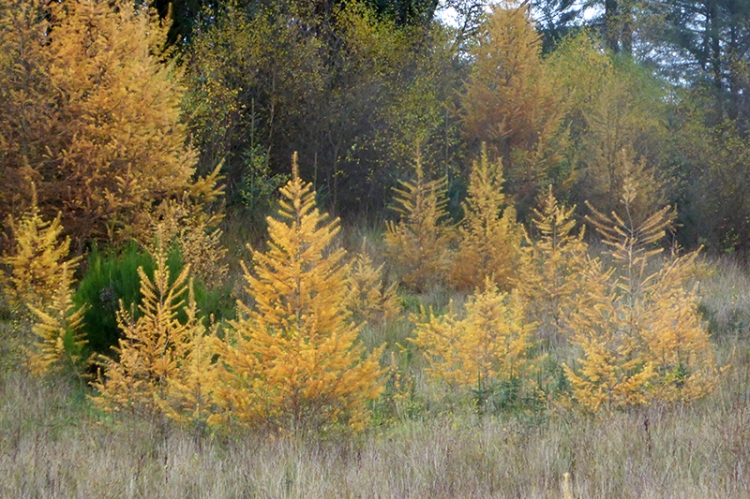 Mrs Tootlepedal had had a busy time volunteering to help with serving meals at the Buccleuch Centre while I was out and we were both quite happy to settle down for a quiet time for the rest of the day.

It was already getting almost too dark for looking at the birds though I did notice that the robin had been beaten to the fat balls in the cage by a dunnock. 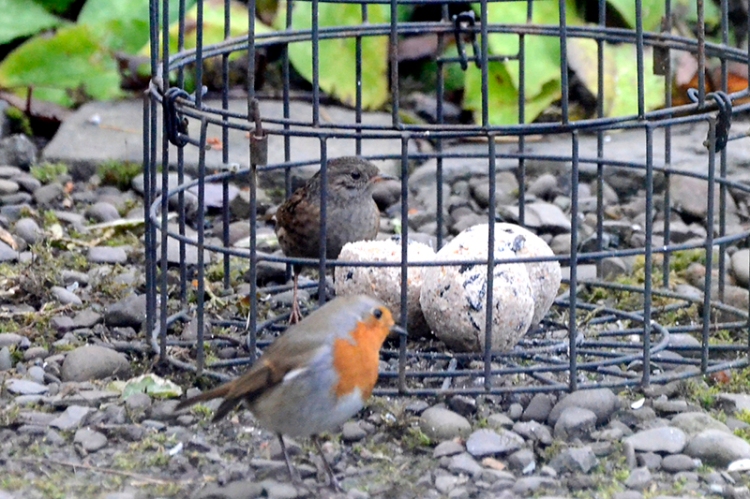 Looking at the forecast, it seems that we will soon be back having chilly nights so this dangling poppy may well be the very last flower of the day… 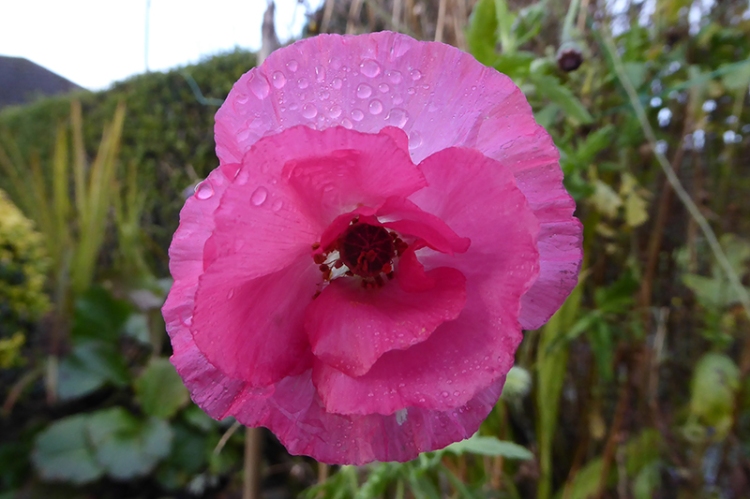 …but I hope to see many more chaffinches as flying bird of the day over the winter. 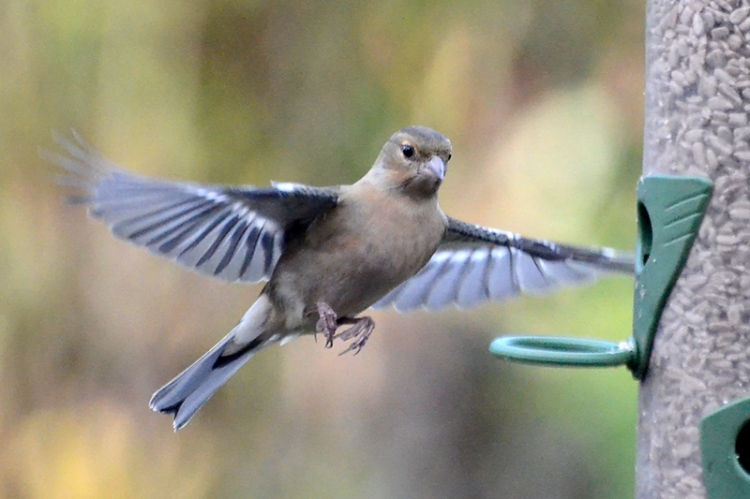 18 thoughts on “A little light headed”