Today’s guest picture, kindly sent to me by Mary Jo from the land of proper snow, is designed to stop me moaning about our weather.  It won’t work though.  She tells me that she is currently looking after three houses and is keeping very fit shovelling snow.

We had a rather nice day here, with the thermometer showing a balmy 5°C.  It still took me quite a time to get myself organised to go out on my fairly speedy bike.  I had plenty of time while I footled about to look out of the window.  I am still waiting hopefully for the return of the long tailed tits but once again, I had to make do with short tailed coal and blue tits.

Visitors to the feeder were rather distracted this morning…

…although some concentrated hard on hitting the spot.

The Christmas robin is working overtime.

And a wood pigeon stalked through the undergrowth. 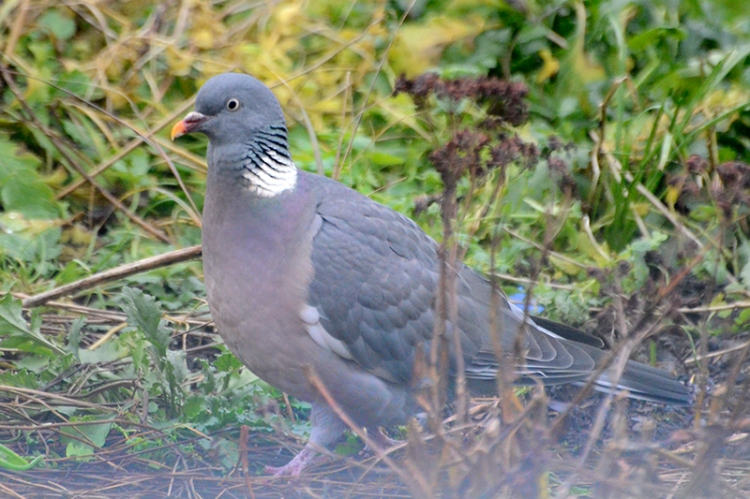 I finally got going and it turned out to be an excellent day for December cycling.  The roads had mostly dried out, the wind was light (and helpful on the way home) and the sun made a really good effort to shine. 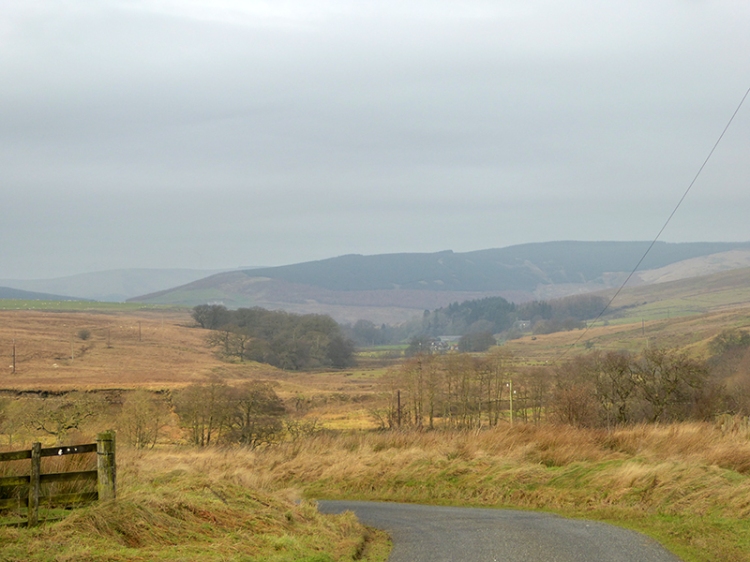 It was very hazy but not as bad as parts of England where thick fog persisted for the whole day.

I stopped to admire some passing trees.

One had had a very brutal haircut. 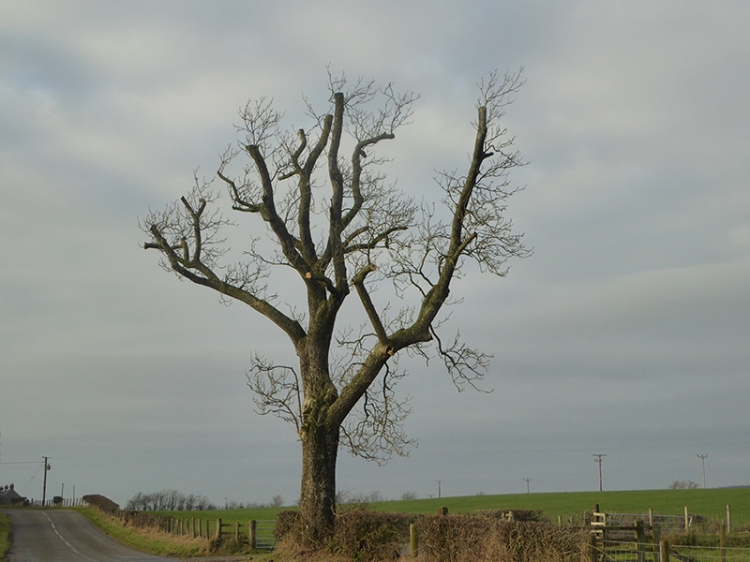 I wanted to have another look at the windmills at Gretna…. 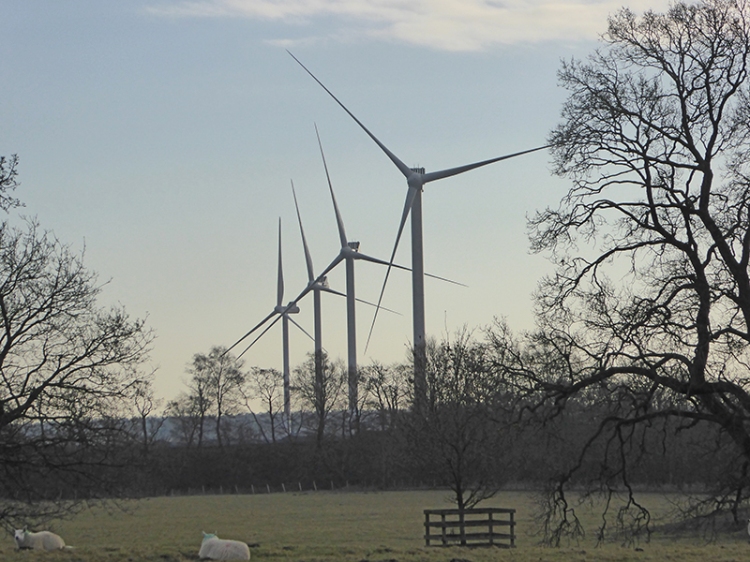 ..which are not actually turning yet.

Because I was cycling in the opposite direction as I went past them, I couldn’t find the exact spot where I took my picture yesterday but I am sure that it was I and not the camera that was confused and the pylons are indeed in front of the turbines at the spot where I took the shot.

I cycled on through Gretna Green down to the border and into England.  I hadn’t really planned a route but it was such a nice day that I headed on south with vague ideas of an interesting route home but when it came to the stop to eat my banana at the twenty mile mark, it became apparent that the banana was still sitting on the kitchen table and not resting snugly in my back pocket.

As I didn’t have any money on me, I was stymied and had to take a short and sensible route home.  I pedalled gently along, stopping from time to time for a drink of water and a rest….

…and got home after 37 miles feeling quite peckish.

Still, the ride took me up to 4100 miles for the year so I feel that I have thoroughly met my target.  I am now considering what I should take as my target for next year.  4000 again? 4200? 4500?  Or an ambitious 5000?  It all depends on health and weather so I might settle for a modest target and secretly hope to beat it.

I had time for a look in the garden when I got home and was impressed by the amount of rain over the festive season recorded by our scientific rain gauge. 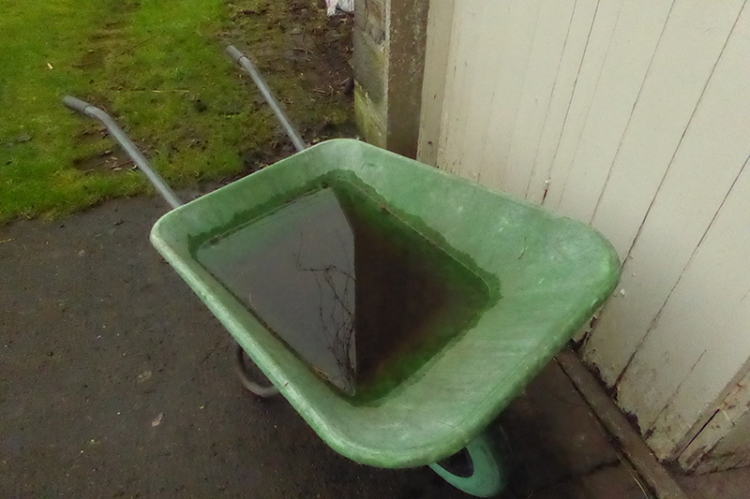 A tiny flower had a tear in its eye.

I did some energy topping up and had a shower  and had time to exchange a few words with Mike Tinker who had dropped by before I had to go off to the Health Centre for a routine visit.

Mrs Tootlepedal has been slaving over a tricky jigsaw puzzle which our older son gave her for Christmas and she finally finished it today.  Tony had asked me for a photo of Mrs Tootlepedal and her mother and if I had known what it was for, I would have given him a higher resolution photo but it turned out surprisingly well in the end.

It was a very good idea for a present and I might well think about it myself next year.

In the evening, I went out to a public meeting in the Buccleuch Centre to discuss the future of our local paper, The Eskdale and Liddesdale Advertiser.  The current owners, a Carlisle based newspaper group, are planning to close it and there a scheme afoot to form a Community Interest Company here to take it over and run it as a non profit making business.

The non profit making bit will be all too easy to achieve but running it as a business will require a lot of expertise, goodwill and enthusiasm.  There was a good turnout at the meeting so we may be able to hope for the best.

The leaf of the day is made up of these green shoots of growth….. 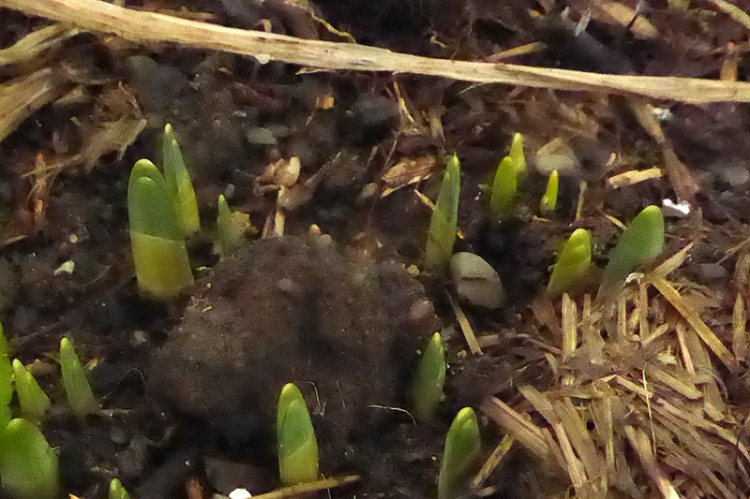 ….and the better light this morning gave me the chance to take a slightly more respectable flying chaffinch of the day.

26 thoughts on “Yes we have no bananas”