Today’s guest picture was sent to me by my Somerset correspondent, Venetia,  who is visiting my sister Mary in London.  She was as surprised to see this rhododendron on Mary’s garden as I was to get her photo of it.  They must really be ahead of the game down there. 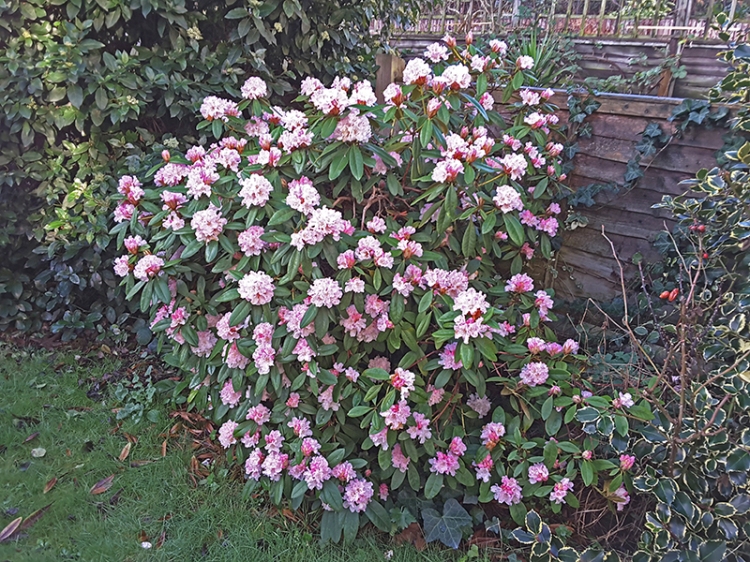 You couldn’t see much at all here in Langholm as we had a day of mist and the surrounding hills were blotted out.  Mrs Tootlepedal had to go to Annan on business and I spent a moment or two seeing if any birds had returned to the garden….

…and was pleased to see that a few had come back.

I didn’t stop too long though, as I wanted to get a cycle ride in before lunch.  I only just got back in time because the mist slowed me down on the single track road over the hill…. 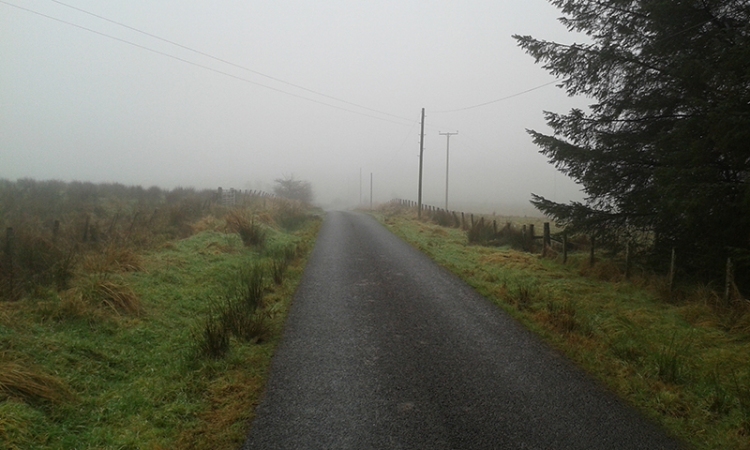 …and I didn’t want to bump into any delivery van in a hurry.

To be fair, it wasn’t only the mist that slowed me down.  My legs were not in the mood to rush about after yesterday’s ride.  Under the circumstances, it was lucky that I was only doing a little twenty mile tour of nether Canonbie and back and I made it home at bang on one o’clock.

I added a minute to my time when I stopped to take a sombre picture of a tree on the old road near Irvine House which has now been by-passed.  I thought that the gloomy day deserved a black and white picture to go with it. 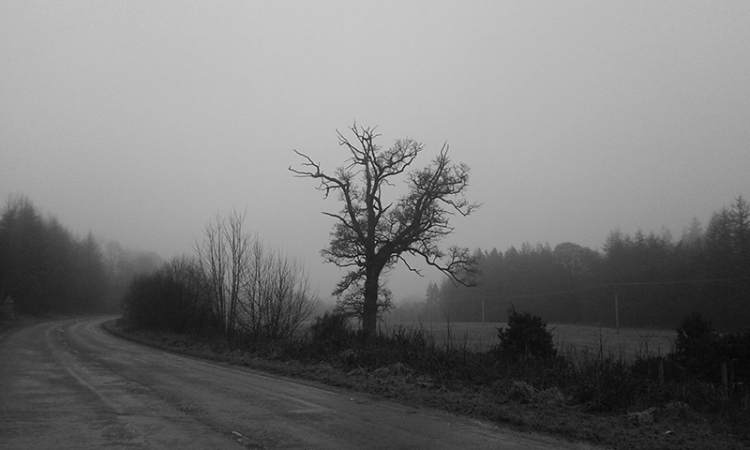 After lunch, Sandy arrived.  We had been thinking about a walk but in the relentlessly grey mist, that didn’t seem so attractive and we decided to go up to the Moorland bird hide and see if we could persuade the birds to come very close to us.

The pheasants didn’t need persuading.  Quite the reverse. 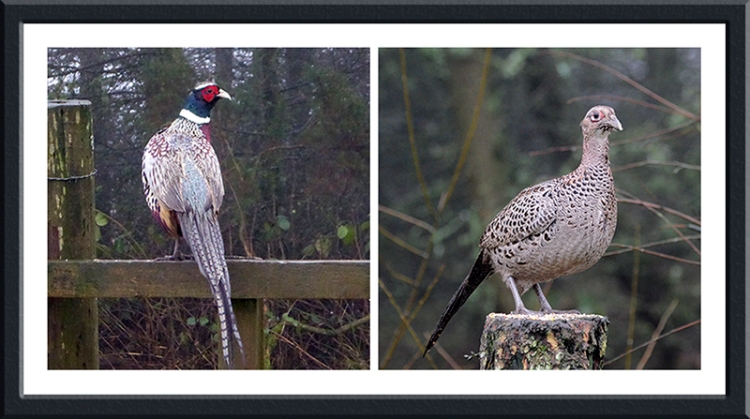 The male sat on the gate without moving as we drove up and got out of the car and the female jumped onto the tree stump and stole all the seeds that Sandy had carefully put out to attract smaller birds.  No amount of shouting and rude words could shift her until she had eaten the lot.

There were quite a lot of the usual birds flitting about, woodpeckers, chaffinches, greenfinches, siskins and all sorts of tits and as the tits came nearest, I concentrated on trying to catch as many of them as I could.

And my favourite of the day…

If you ever want to see a picture of a disappointed bird, this is the one for you.

Among the usual customers, we were offered a couple of treats. 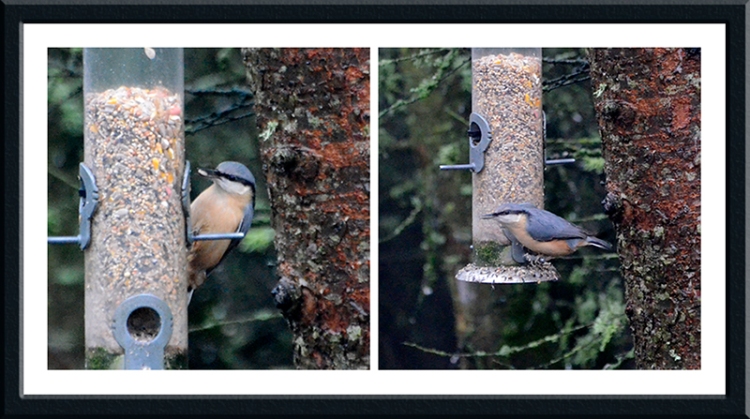 Either one nuthatch came twice or two nuthatches visited once each.  Sadly from our point of view, they didn’t live up their name and wouldn’t come to the nuts which were closer to us than the seed feeder.  Perhaps these are rare seedhatches.

To the right of the hide, a tree creeper did live up to its name and crept up a tree. 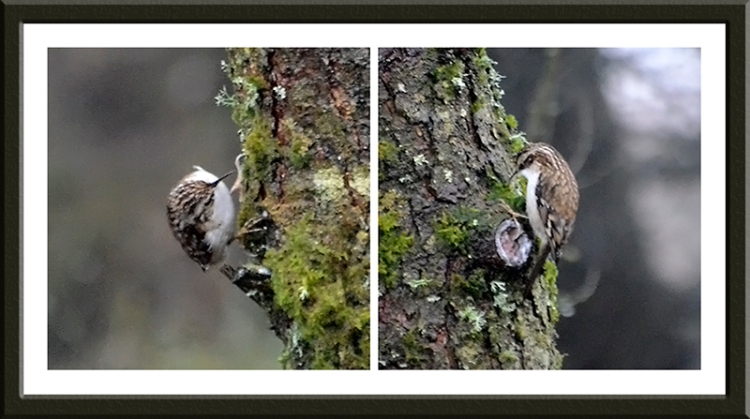 Another one crept up another tree but it was just out of range.

On our way back home, we paused for a moment to watch a couple of men building a very extensive scaffolding platform for the bridge repairs. 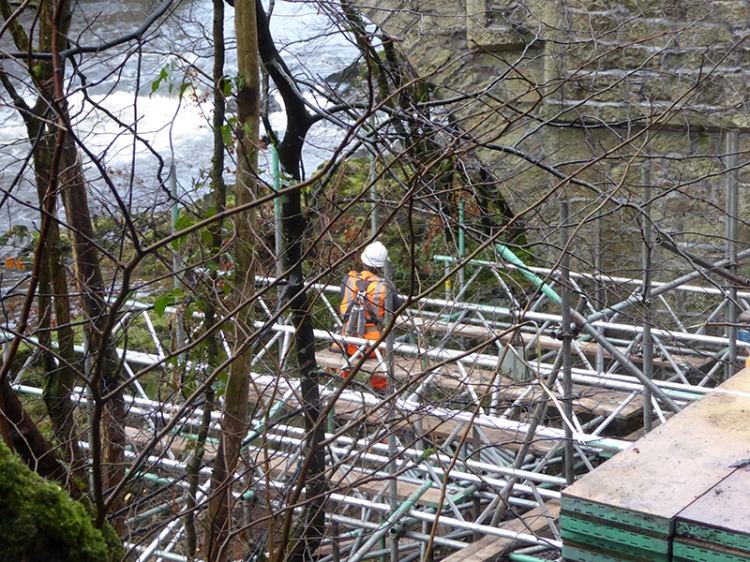 I will try to keep an eye on these works as they develop.

Once home, we had a cup of tea and several biscuits with Mrs Tootlepedal and then Sandy went off after showing me some of the latest sterling photographic work he has been doing on the Langholm Archive Group website.  If any reader has time to spare, I can thoroughly recommend a visit to the photographic section of the site, where there are literally thousands of indexed pictures documenting the history of the town and its people.

In the evening, I met Sandy again, this time at the Buccleuch Centre where we were attending a concert by a Canadian band called Ten Strings and a Goatskin.

The ten strings were a fiddle and a guitar and the goatskin provided the percussion along with a wooden board on which the percussionist stamped with great enthusiasm.   Their website says that “the group is a bilingual folk/fusion trio from Prince Edward Island who present traditional and original music inspired by their Atlantic Canadian histories and roots, and infused with pop and world rhythms.”   That sums them up nicely.

They were slightly exhausting as slow numbers do not figure largely in their repertoire but they were very entertaining and they talked well between numbers.  They invited us to clap our hands or tap our feet along with them as they played but I wisely resisted as, had I tried to join in, the infusion of pop and world rhythms might well have led to a dislocated ankle.

I did get a flying bird of the day today in the mist.  An obliging chaffinch hung in the air for me. 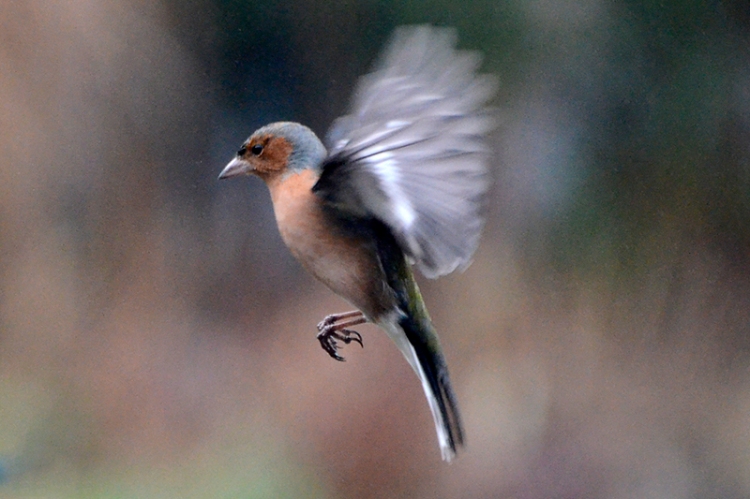 31 thoughts on “The return of the mist”