Today’s guest picture was sent to me by my former colleague Ada and shows a very pretty view of Arkleton Lochan.  (She should come to the Camera Club if she has more pictures like this one.)

It was a cold and mean day today and I resisted the temptation to go up to the Moorland Feeders with Sandy with less sadness than I might have felt on a better day.  I had things to do instead such as getting some fresh air into the car’s tyres and then going down to Longtown and fetching my fairly speedy bike after its service.

I did find a moment or two to look out of the window but the birds and I were out of sync and when I picked up a camera, they weren’t there.

Well, mostly they weren’t there and when they were there, my timing was off. 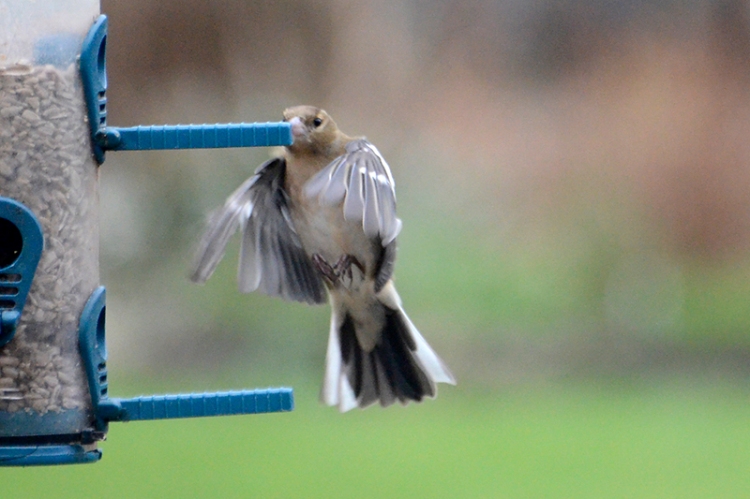 Though I caught a pair of chaffinches in the end.

After lunch, Mrs Tootlepedal drove off to Lockerbie to catch a train to visit Matilda and I put on my thickest cycling gear and gave the newly serviced bike a test run down to Canonbie and back.  It was a theoretical 4°C but a biting east wind made it feel colder and I didn’t stop much on the way round as just taking off the gloves to get the camera out made my fingers go numb.  I did take a well bent tree…

…and I stopped three miles from home to watch in dismay as a sheet of snow threatened to engulf Whita.

I was expecting a miserable end to my ride but curiously, the snow stayed away from the road until the last hundred metres and I got home dry.

The snow didn’t amount to much, being very dry and powdery so I walked round the garden to see if there was any colour.  There wasn’t much to see and the light was poor anyway.

In the evening, Susan arrived and we went off to play recorders with our group in Carlisle for only the second time this year.  We were a bit rusty but we had a thoroughly enjoyable evening with J S Bach, J C Bach, Haydn, Byrd and Scott Joplin among others providing us with music to play.

We are in for a spell of cold east winds so this might limit my enthusiasm for wandering around taking pictures.  We shall see.

24 thoughts on “Another pedal, another tootle”