Today’s guest picture comes from my brother Andrew, who was half way up Snowdon in Wales when he saw this view yesterday.  He says that the best thing about climbing Snowdon is that you can get a cup of tea at the top but the view is pretty good too.

Our spell of dry and windy weather continued today with both more sun and more wind than yesterday.  It seems a long time now since we had any serious rain.

The garden is enjoying the weather and doesn’t seem to be needing rain yet though.  It is hard to beat a sight like this when I went out into the garden after breakfast.

Mrs Tootlepedal’s front beds don’t get the sunshine until a bit later but the mixed tulips were quite bright enough without any help.

I had intended to go for an early bike ride but I wasn’t feeling very perky, probably because my asthma was playing up a bit and definitely because the wind seemed to be very strong so I idled quite a bit of the morning away before I finally chased myself out of the house.

I was glad to be out.  It was a sparkling day and the wind blew me up the hill and made the start of my ride very easy.  Because of the stiff breeze, gusting at well over 25 mile an hour at times, I decided to use my valley bottom ‘outdoor gym’ and cycle 25 miles by repeating the four mile trip up to Cleughfoot and back three times.

The wind was so strong that I took more or less exactly the same amount of time to cycle up the hill as I did to cycle back down again and on the third iteration of the route, I set my fastest ever time for the three uphill miles from Pool Corner to Wauchope School.

I also stopped for photos, as my modest speed let me keep an eye for points of interest like these bright things on a conifer.

I couldn’t miss the gorse which is as good as I have ever seen it this year.

There were lambs bleating in every field. 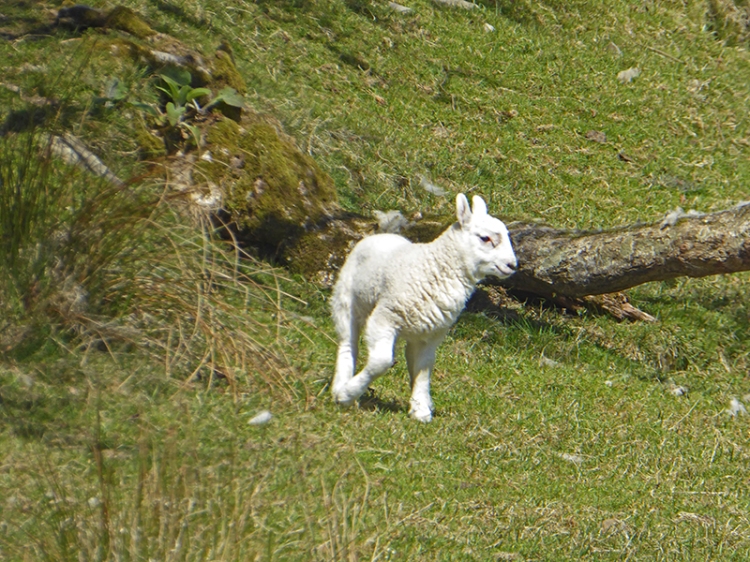 And the blackthorn blossom at one point was sensational. 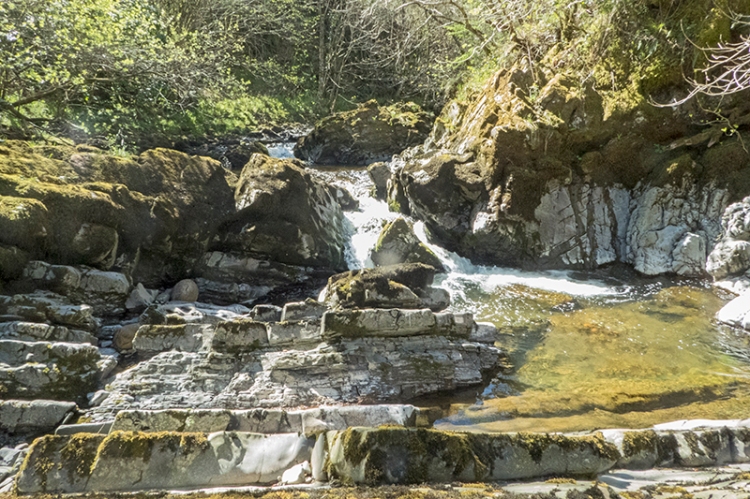 …but this did let me appreciate just how bent the rocks beside it are. 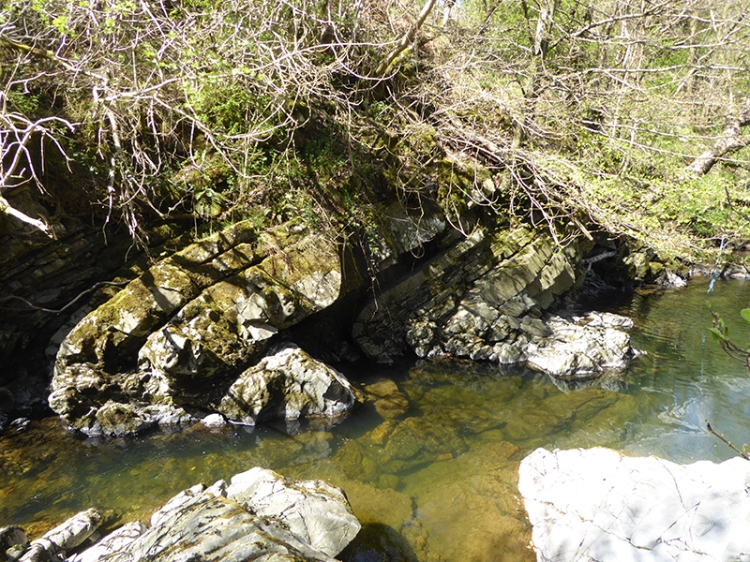 Our peaceful countryside has been the subject of some powerful forces not so long ago.

I had another look at the apple blossom when I got back to see if there were any bees about.

The bird seed was going down at the usual speed.

Mrs Tootlepedal had been helping out with the lunches at the Buccleuch Centre so we had a late lunch when she got back and while she had a well deserved rest, I pottered around the garden, dead heading yet more daffodils and some of the early tulips.

I roused Mrs Tootlepedal and we drove down to the animal feed shop south of Longtown where I get my bird seed.  I bought a big bag of seed which I got free, courtesy of a generous bribe from BT in the form of a prepaid card which they gave me when I changed my internet supplier to them recently.   I may well repay them by changing to another supplier when my cheap first year runs out.

We stopped in Longtown on our way home and I took a quick walk along the river.  The bridge of many arches was looking good in the sunshine.

In fact it was looking so good that I thought I might try taking three pictures and merging them using Photoshop, a technique I learned at the last Camera Club meeting.

This was the result.

You can click on the picture for a larger view.  The technique works pretty well. I couldn’t see the joins. 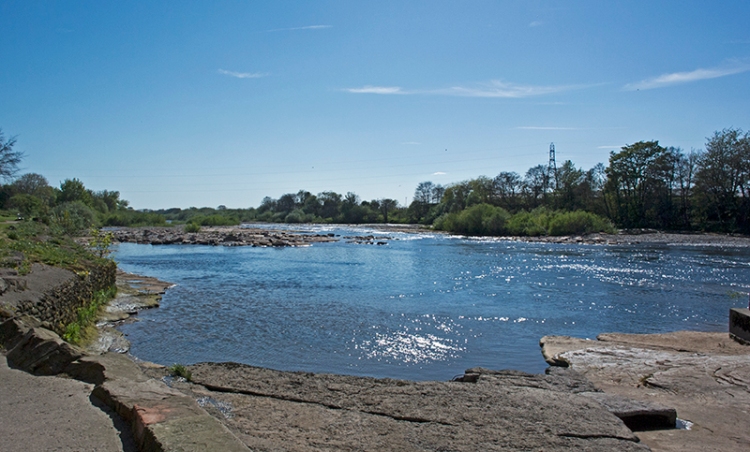 …so I strolled down the riverside path… 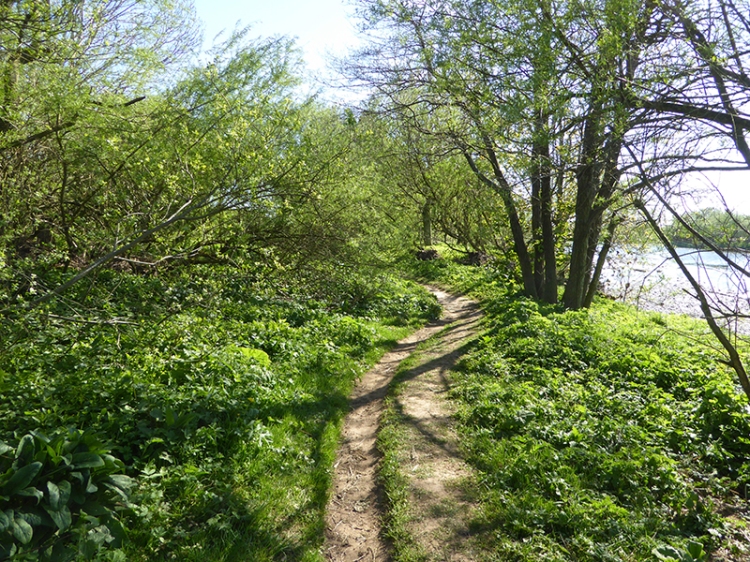 …and in the shelter of the trees, it was a beautifully warm day.

I was delighted to see an orange tip butterfly and even more delighted when it thoughtfully posed for me.

A small tortoiseshell was not so obliging.

There were wild flowers on view as well.

Between the cycle ride, pottering about the garden and the riverside walk, I took far too many pictures today but the weather is due to be fine again for the next two days so I will have plenty of opportunity to take many more.

In the evening, Mrs Tootlepedal went off to an Archaeological Society meeting and I went to sing with the Langholm Community choir.  When I came out, there was a very beautiful sunset to round off an enjoyable day.  Luckily I didn’t have my camera with me as I think that the 80,000,000 pictures of lovely sunsets already on the internet are probably more than enough….but it was a particularly good one.

The title of the blog today refers both to the wind, which was hard to beat when I pedalled against it in the morning, the beautiful river views at Longtown in the afternoon which were looking as good as I have ever seen them and finally the speed at which our conductor in the evening took one of our pieces.  A beat that I found it was very hard to keep up with.

I didn’t have much time for flying birds today and this goldfinch, threading its way towards the feeder, was the best that I could do. 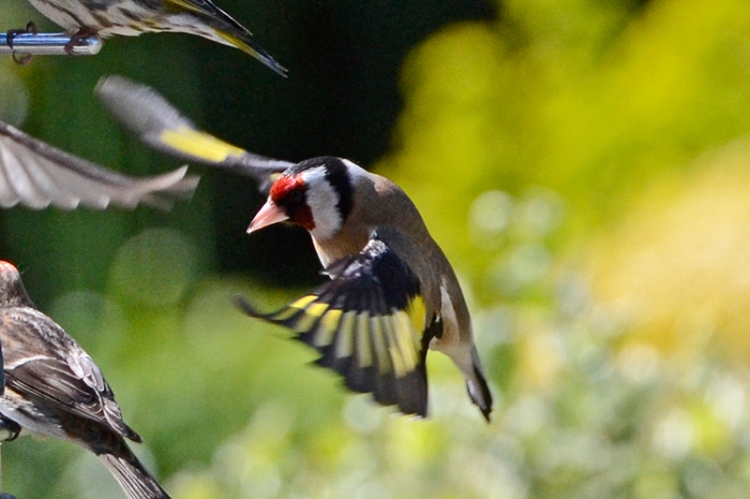