Today’s guest picture is another from our older son’s visit to Anstruther and shows that he took his friends with him.

Another of the regular Moorland bird feeders was away on holiday today so I had a second opportunity this week to act as a fill-in feeder filler so I went up after breakfast to do my duty.  If the weather is good, which it was today, the duty is also a pleasure as it gives me a chance to sit in the hide and watch the birds.  We are not feeding birds in the garden at present so it is an extra pleasure to do a little bird watching from the comfort of the hide.

I had a good variety of birds to watch today.  There was a host of siskins….

…but only one greenfinch and tree sparrow that I could  see. 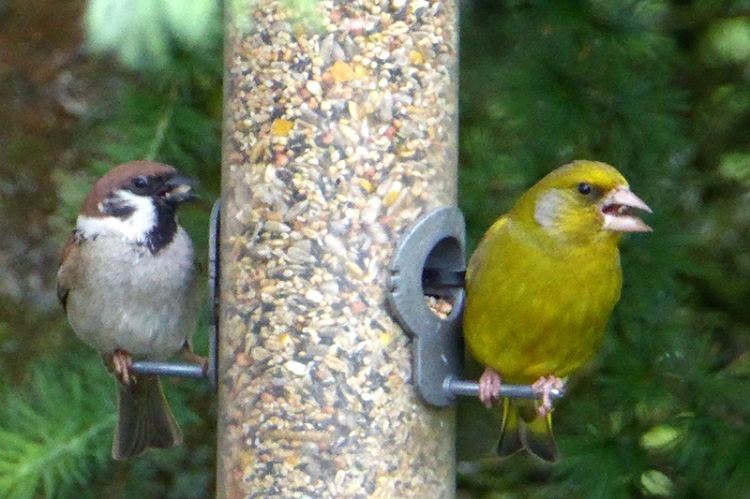 Either a jay paid several visits of several jays paid one visit each but one way or the other, there were plenty of opportunities for jay watching.  (I was hoping to get a shot of jay walking but alas, no.)

There were a very few blue and great tits about…

…but I didn’t see a coal tit today at all.

My chief entertainment came from some very obliging woodpeckers who came up close to the hide and stayed nice and still and sometimes even ‘watched the birdie’.

My Lumix was on its best behaviour after having refused to work at all and it came in handy.  (It knows that I have ordered a new camera. Too late now.)

The one in the bottom left corner was the first arrival.  The other three pictures are all of another bird which arrived twenty minutes later.

After our recent warm weather, it was a lot cooler today and I began to feel a little chilly and left the woodpeckers to it and came home.

I had a cup of coffee, did the crossword and then went out into the garden to see what Mrs Tootlepedal was up to and to take a picture or two while I was out there.

Mrs Tootlepedal was busy planting out new flowers and I looked at some old friends.

A Rodgersia and a Spirea had a competition to see which could pack most flowers into the smallest space.

At lunchtime, Mrs Tootlepedal went off to help out at the Buccleuch Centre which was putting on a show for children and I had some potato soup and cheese to get my strength up and went out and mowed the greenhouse grass and the drying green and then sieved some compost.

There was a lot of buzzing so I paused from time to time to look at the cotoneaster and the astrantia which are still attracting a lot of interest.

Mrs Tootlepedal came back and got straight down to some more planting and tidying and I lent a hand and did some dead heading and tidying of my own.   I even did some weeding on the middle lawn.   The large amount of grass and flower pollen floating about at the moment is not helping my breathing so any work I do is done at a very gentle pace with regular visits indoors for a little rest.  Mrs Tootlepedal on the other hand just carries on regardless.  She is a human dynamo in the garden.

She notices things too and called my attention to a red admiral butterfly sunning itself on a path.

Like the woodpeckers earlier in the day, it sat very still for its portrait.

I took a last set of flower pictures….

…and then we went off shopping to stock up on food and supplies.  By great fortune, our food shopping managed to include some scones and clotted cream.  We are not quite certain how this happened but we managed to get rid of them when we got home by eating them with the recently made strawberry jam.  We haven’t had a cream tea for ages so this was a real treat.

I was considering an evening cycle ride in the hope that the wind, which had been boisterous all day, would have died down by then but the fresh wind persisted so I went for a walk instead.

It was a lovely evening as long as you could keep out of the wind.  I chose a sheltered route and enjoyed my stroll a great deal.

I divided my attention between things that were close….

….things that were a bit further away…

….something that was quite far away…

It was a much better choice than battering into a strong wind on my bike and getting depressed.

Mrs Tootlepedal had had her tea and was back out in the garden trimming hedges when I got home.

In a vain effort to improve my brain power, I had fish cakes for tea.  It hasn’t helped my typing.  I could get the blog done in half the time of i didn’t have to correct eevry other wird.

…and I normally would have been quite happy to finish a post with it it but it is outshone today, in my view, by a relaxed greater spotted woodpecker. 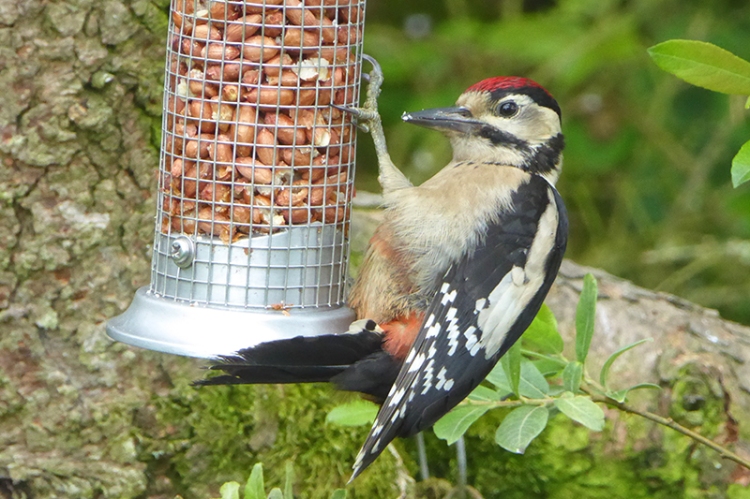