Today’s guest picture comes from a visit my sister Mary paid to Queen Mary’s Garden in Regent’s Park.  She seems to find good weather for her visits to the park.

I have been a bit wimpish lately about cycling in brisk winds so I made a plan to get up promptly this morning and to get dressed straight into my cycling gear, thinking that I would be too embarrassed not to go cycling even if it was windy.

This plan worked quite well,  though not quite as promptly as I had hoped but all the same, by the time that Mrs Tootlepedal had gone off to sing with the church choir, I was ready to go out on the fairly speedy bike.

The second part of my plan involved a change of my usual tactics.  On a windy day, I try to choose a route that will leave me with the wind behind me for my return home.  The trouble with this plan, which seems quite plausible on the surface, is that it means starting my cycle outing by heading into a brisk wind and this can be discouraging and often ends up with a shorter trip than I would have liked.

Today, therefore,  I decided to start off downwind and this resulted in my doing the first 20 miles at 16 mph and feeling open to adding quite a few miles of the rest of the trip.

On my way along the Canonbie by-pass as I went from the Hagg to the Hollows, I noticed a large number of orchids so I stopped to have a look.

I must have seen at least a hundred over the whole length of the by-pass.

My next stop was to look at the River Lyne as I crossed the bridge south of Longtown.

I often stop to look at this view as I like its peaceful nature and while I was there today, I went down to the river side and looked up at the bridge.  I saw something which I must have seen before but never noticed, if you understand what I mean.

At some stage this bridge has either been drastically widened or undergone a major repair.  I was a bit alarmed to see so much driftwood resting against the pier of the bridge.

I stopped for a banana and a date while my bicycle had a rest beside its favourite bench at Newtown after 20 miles. 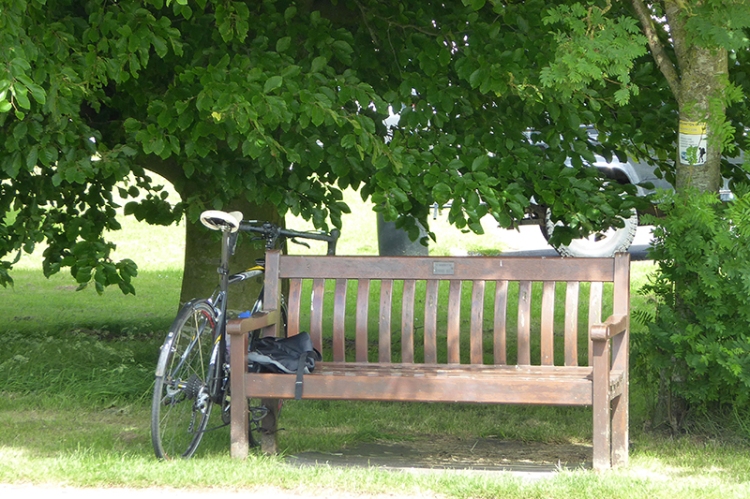 Very often on a Sunday, this is my turning point and I head for home to complete a fairly easy 40 mile run but today, after such an enjoyable whistle down the wind, I took a more extensive route home through Irthington….

…which has a nice church and then onto Carlisle.

I passed a couple of fine buildings.

It was my plan to go through Rickerby Park and cross the footbridge over the River Eden but when I got there, I found that the bridge was closed so I took a look at the river near the bridge…

…and cycled into the centre of Carlisle and crossed the river on the road bridge before dropping down into Bitts Park.  This route is very popular with walkers as it is part of the Hadrians Wall walking route.  You can’t see any sign of the Roman Wall here so I had to make do with the impressive walls of Carlisle Castle… 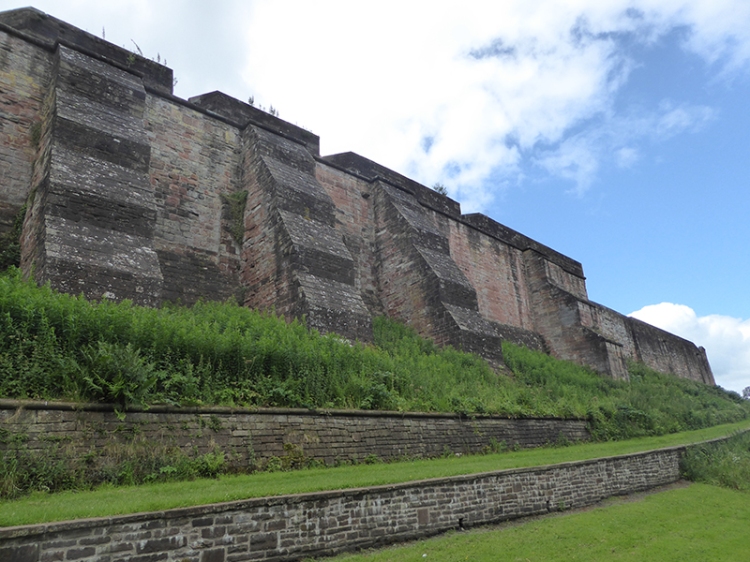 …past which I cycled.

I decided to take the National Cycle Route 7 from Carlisle to Dalston, an off road but well surfaced track which follows the River Petteril…..

…and the railway out of the city.

At Dalston, I bought some extra bananas and sat on the grass for a while to plan my route home.

The wind was coming from the north west and I wanted to go north so I chose a route which tacked into the wind, giving frequent sections where the wind helped me for a while and the process of getting home was not too painful at all.

I passed through Great Orton and admired one of my favourite churches….

….and then wiggled my way round the Carlisle Northern by-pass until I got near to Rockliffe.  When I looked over the fields, I could see the spire of Rockliffe Church and the River Eden, tidal at this point, looking very full indeed.

I thought that the  river might make a good photograph so when I got to the village, I cycled down the path beside the church only to find….

…that the tide was so far in that my way was impassable without getting wet feet.

I didn’t fancy soggy socks so I chose a different route and headed for Gretna up the service road.

This road runs right beside the fairly new section of motorway and when they built the motorway and the service road, they didn’t stint on planting wild flowers and what might have been a utilitarian section of road is a delight… 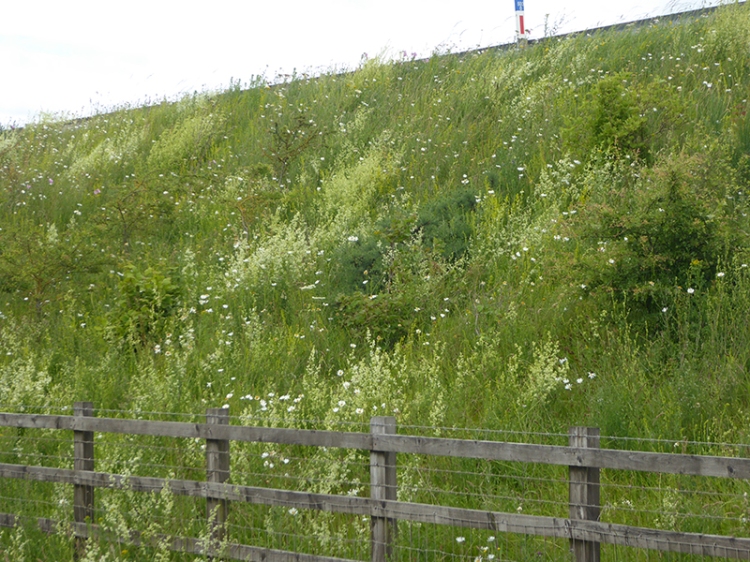 …with plenty to please the eye.

My zigzagging was going so well that I did one last zigzag from Gretna to Kirkpatrick Fleming and ended up going up the A7 on the cycle route.  I had leisure enough to stop there for one last wild flower view…

…before completing a 75 mile trip and arriving home really pleased with my plan for the day.

The temperature was ideal for cycling, there was enough occasional cloud to moderate the heat of the sun and as you can see, there was no serious climbing at all.  Good route choice.

Mrs Tootlepedal had been busy all afternoon in the garden so I had a walk round with her when I got back.  Naturally I took a few pictures.

The Queen of Denmark was looking good. 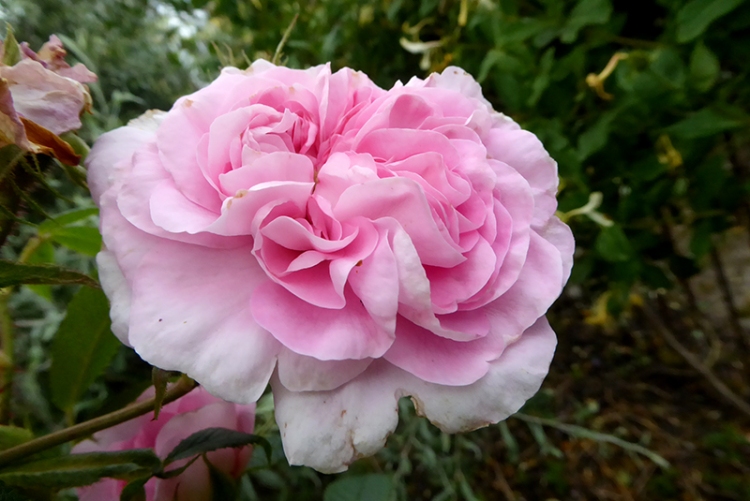 As were the delphiniums, which have withstood the winds very well this year.  Mrs Tootlepedal gave them early support. 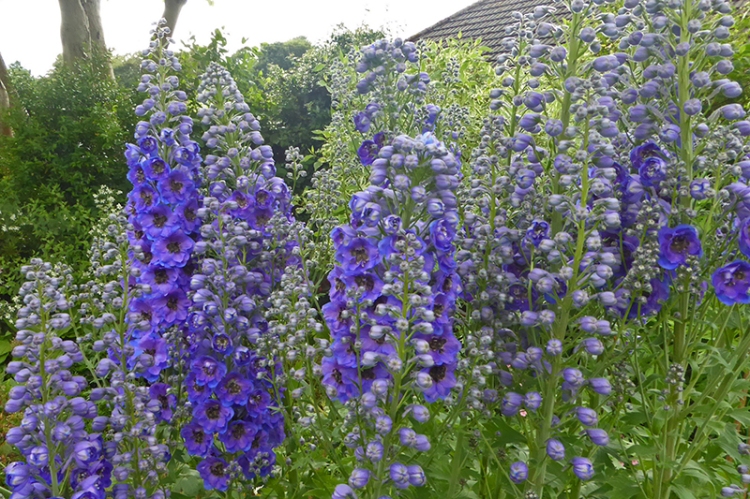 We came across a very curious sight deep in a flower bed…..

…which turned out to be the back end of a neighbour’s cat having a snooze.  It gave us a scornful look and tucked back in under the leaves.

…which Mrs Tootlepedal tells me is a Euphorbia (an Euphorbia?) which we bought earlier this year. 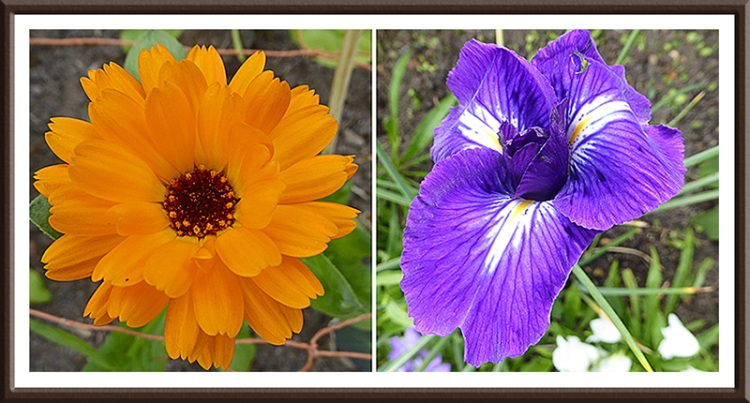 …so we are not short of colour.

And the bees were coming in numbers onto the astrantia.

I thought it was only appropriate to take a picture of Special Grandma in honour of the gardener.

I made a sausage stew for my supper and cooked three little beetroots which have been picked as thinnings.  Both turned out well and that rounded off a day strictly on the credit side of the great ledger of life.

While I was in the garden, I met a young blackbird on the lawn.  It is the non flying bird of the day.

19 thoughts on “A plan comes together”