Today’s guest picture is another from my brother’s tour with Justin.  They visited Sizergh Castle near Kendal on their way to Langholm.

The forecast had suggested that today would be calm, dry and occasionally sunny, a perfect day for mowing grass.

Mowing the grass was was tempting but the lack of wind, a very rare thing round here this year, made cycling even more tempting.  Mrs Tootlepedal got me up promptly and provided breakfast and for once I managed to avoid any footling around and got off at about nine o’clock.  The days are still long so I had plenty of time for pedalling.

It was quite cool when I set out but it got warmer as the day went on and it turned out to be, just as the forecast had predicted, a perfect day for cycling.

I had chosen a relatively dull route, a simple out and back mostly up the old Glasgow road from Gretna and so I was a bit dashed when I got to Gretna to find a “Road Closed ” sign across the Glasgow road.  They were applying gravel top dressing.  I was joined by another cyclist and we enquired whether two cyclists might sneak through and were relieved when we were given the all clear.

The other cyclist turned out to be a Norwegian, who was doing the Land’s End to John  o’ Groats route with the excellent scheme of pedalling for the morning and early afternoon and then finding a TV screen where he could watch the Tour de France.  I was able to tell him that a Norwegian cyclist, Edvald Boasson Hagen, had won a stage of the Tour of Britain a few years ago by riding at terrific speed down the very road that we were cycling up.  He was impressed.

We cycled together as far as Lockerbie, where he stopped for coffee and I pressed on.  His company had been invaluable as it kept me to a sensible speed over a hilly section of the ride and it provided a pleasant diversion during one of the duller bits of my route.

I stopped for a snack at 40 miles.  The route follows the main railway line and motorway up the Annan valley but the motorway was pretty quiet as I ate my roll.

The views of Upper Annandale as I went along were very enjoyable.

My next stop was at Beattock, home of a very pretty church…. 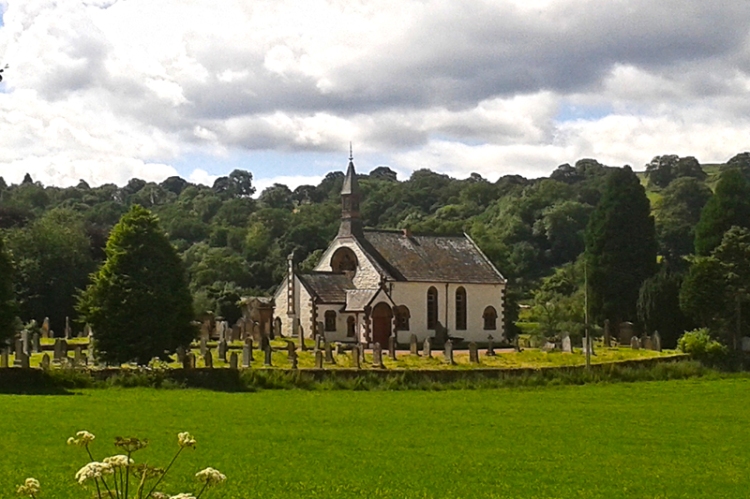 …where I visited a pub and enjoyed a half pint of good beer and my cycling staple, a plate of egg and chips.

With fuel on board, I set off to pedal up the ten mile climb to Beattock Summit.  I think that it is my favourite piece of cycling road.  The verges were filled with wild flowers (which my phone refused to photograph properly), the surface is mostly reasonable and very good in places and the gradient is so steady that once the correct gear has been selected, progress is regular and painless.

In this way I arrived at the 1000 ft summit very smoothly and took a moment to look around.  This is a world of massive windmills…

…and large amounts of them too. 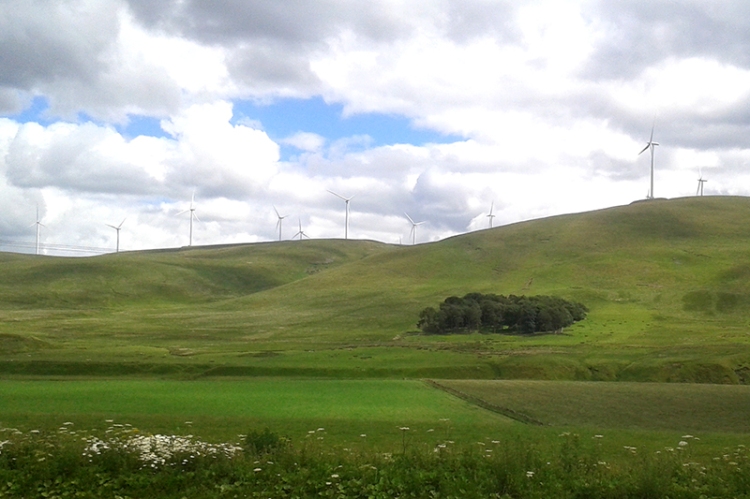 The wind was so light that most of them were stationary, a very unusual occurrence, but there was a light breeze just beginning to persuade a few to get started.  By the time that I came back on the return journey, most of them were turning.

I had come so far, that I was now in the upper Clyde valley….

…and the River Clyde, which starts not far off, will flow through Glasgow before it gets to the sea.

My turning point at 60 miles was marked by a fine hedge of roses beside the road.

I was a bit worried by the fledgling breeze but it proved more of a  help than a hindrance on my way back down to Gretna and I rattled along very comfortably.  I stopped at 80 miles to eat my second roll and my phone camera worked well enough to spot a hoverfly…

…on a striking ragwort plant beside my resting place. 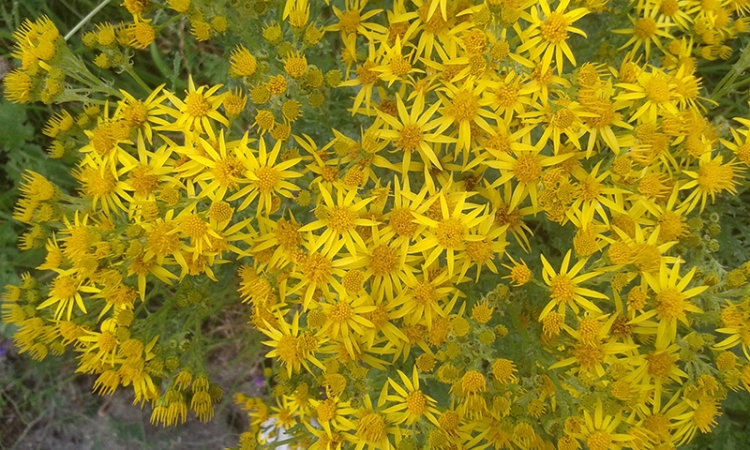 I had failed to pack a couple of bananas which I had bought specially for the trip so I stopped in Lockerbie to buy a large ice cream, a bottle of juice and a bar of chocolate to help get me home.  Together with regular nibbles of a guava energy bar, they did the trick and at no stage of the journey did I run out of steam.

To avoid the new top dressing on the road to Gretna, I turned off at the church in Kirkpatrick Fleming…

…and took a back road down to Gretna.  My satisfaction with this cunning plan was slightly dented when I ran into some newly laid top dressing at Glenzier.  I had seen the warning sign when I passed in the morning but didn’t think that they would get there when they had been busy at Gretna.  I was wrong…but it was only a short stretch and there had been sufficient car traffic to flatten the gravel  out enough to make it safe for an elderly cyclist.

…which showed that I was nearly home.

It didn’t tell the whole truth though as I had had a mathematical revelation as I pedalled along.  Without thinking too hard, I had roughly calculated that 120 miles would give me a distance of 200km.  This seemed like a nice round number and that was why I had turned at 60 miles.  However, a little more thought revealed that I would need 125 miles to hit the 200km mark  (125×8/5=200) so I had to cycle through the town and out of the other side to make up the missing five miles.

This was no problem though and I pleased and surprised myself in equal measure by finding that I was fit enough to do this distance, the furthest that I have ever cycled in a day, with no great trouble at all.  I felt that I could have gone quite a few miles further if needed.  The secret was taking things slowly and steadily.  That is not to say that my knees are not complaining quite a lot as I sit and write these words though.

Once again, I took sufficient care of my eating and drinking that I weighed exactly the same at the end of the ride as I did at the start.

I had enough energy to walk round the garden in delightful evening sunshine when I got home.

There is a new knautia out…

…and pink phlox have come to join the white. 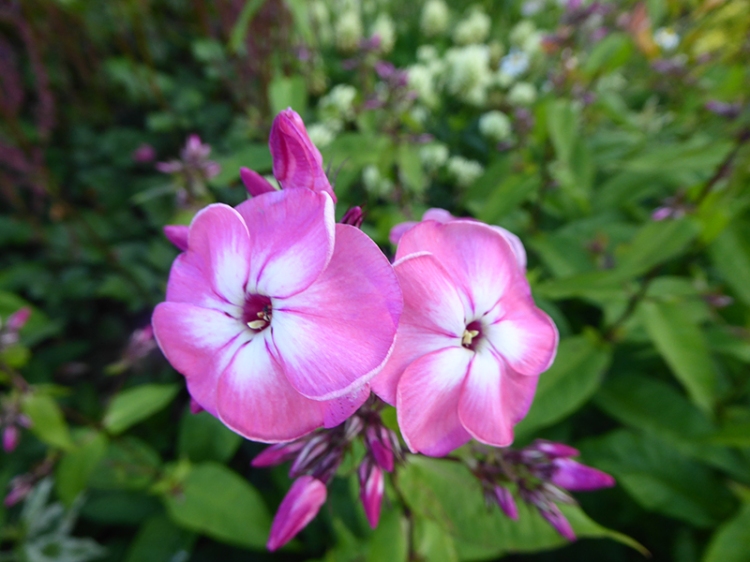 What I call marigolds but what I should call calendula I am told are popping up all over the place.

…but they have probably bloomed too early to be any use to the maker of the crown of roses which is carried round the town on Common Riding day on the last Friday of this month.

I retired for a meal of sardines, garnished with new potatoes, turnips and broad beans from the garden and this drew a very satisfactory day to a close.  The grass looked as though it needed cutting badly though.

For those interested, further details of the ride can be gleaned by clicking on the map below.

A thousand foot climb doesn’t look much when it is spread over forty miles!

17 thoughts on “Letting the grass grow under my feet”