Today’s guest picture comes from a visit my brother paid to Wirksworth last month.  It is an ancient lead mining and quarrying town in Derbyshire which has a steam train and guard’s van shuttle to the Quarry museum up the hill. 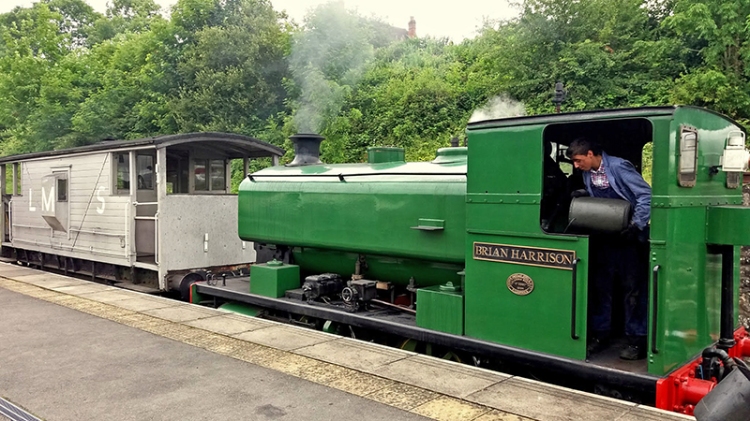 I made use of it by cycling down to Canonbie on my regular 20 mile route while Mrs Tootlepedal went off to sing in the church choir.

Before I left, I had a quick look in the garden.  The bees were setting about the poppies with great enthusiasm and it was hard to find one to photograph without a bee or two on it…

…though they could be found.

Once I got going, I found that the wind was in a helpful place, not too bad on the way down and very useful on the way back.  I only stopped for one picture….

…but I thought that this belted Galloway bull was too handsome to leave unrecorded.

I had no time to waste when I got home as I was hoping to get up onto Castle Hill to take pictures of a charity ride which was setting off just after midday.  I packed a sandwich and a date, picked up a camera or two and got a lift from Mrs Tootlepedal to the bottom of the track up the hill.

I didn’t have to use the stile over the wall as the gate was opened for the riders to come. 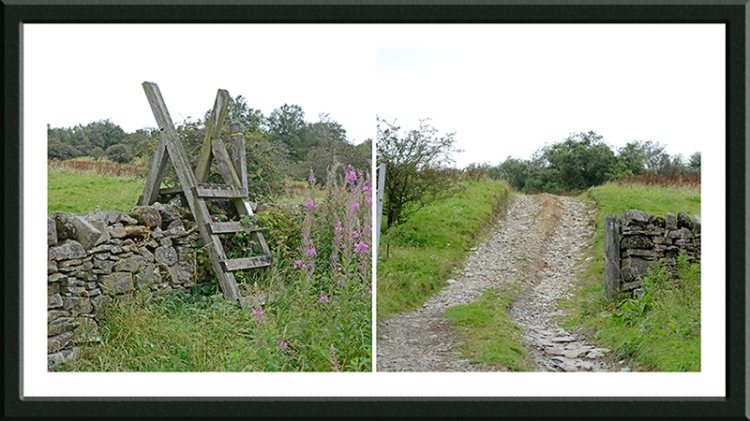 The track up Castle Hill was steep enough for me to be quite happy to find things to stop and look at on the way up.

At one point the hillside was almost like a meadow.

And of course, there were splendid views that needed to be looked at too.

I got a very expansive view of the three river valleys that meet in Langholm and the one that leaves it.  (Click on the picture for an enlargement.)

When I got to the top of the hill, I had time to sit on a handy rock and eat a honey sandwich and admire the view to the north.

While I was eating my sandwich, I was passed by Laura who was going ahead of the riders to open a gate further along the ridge.

The wind had dropped and even on a coolish day, it was warm work for her as she strode across the heavy ground.

…before the first riders appeared over the crest… 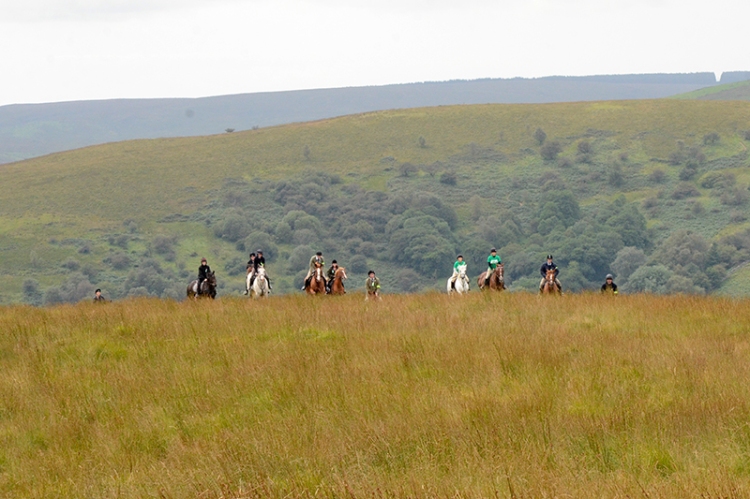 …and then past me. 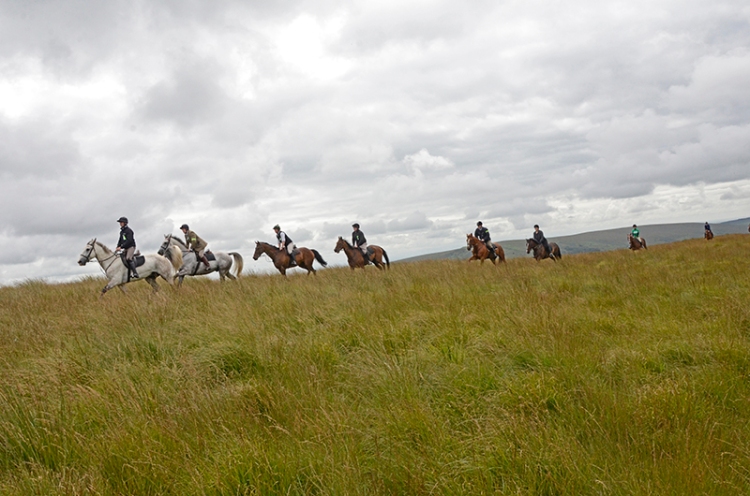 It was a sociable ride. 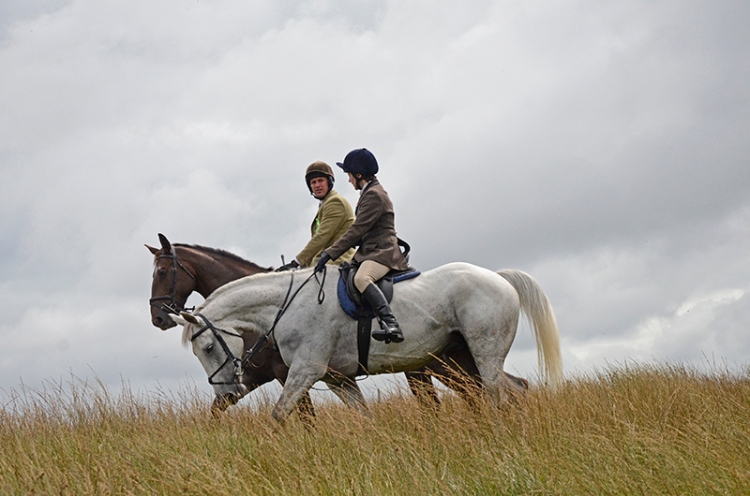 There was a good number of riders out and I hope that they raise a lot of money for Macmillan Nurses.

…the leaders were well ahead.  The last I saw of them was when they were waiting for the rest to catch at the top of Potholm Hill.

I left them to descend to the Ewes valley and turned back down the hill to the town.

One of the penalties of increasing age and creaky joints is that going down a steep and stony track is a lot worse than going up one but I arrived safely on the Castleholm and gave my legs a break as I watched a few overs of cricket. 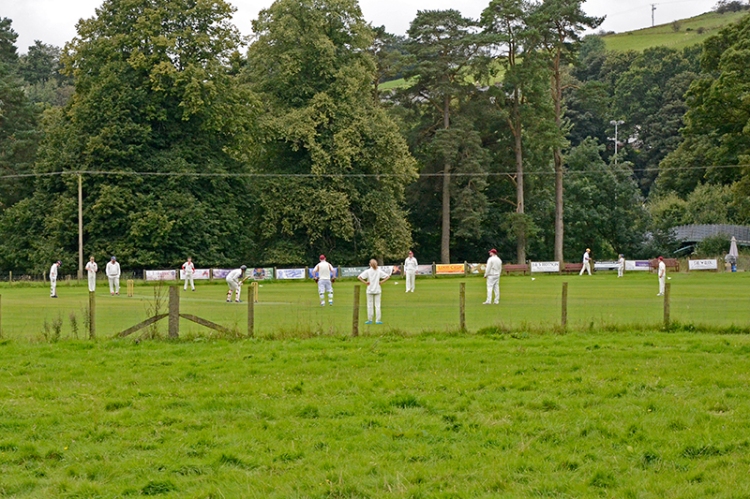 When I got home, I finished off my picnic lunch and then went out into the garden.  Mrs Tootlepedal was busy cutting down comfrey to add to  compost bin A so I took the hint and sieved a bucket of two of compost from Compost Bin D.  Mrs Tootlepedal took away the rough discards which hadn’t gone through the sieve and used them for a mulch for the hedge.

Since I had already taken far too many pictures, I heroically abstained from taking any more garden flowers pictures….

Then I went in  to watch some athletics on the telly as I thought it was probably all right after a busy time to let someone else take the exercise for me.

I did go out and mow the drying green when the athletics finished and by this time, the wind had dropped and it was a lovely evening in the garden, even if it was still a bit cooler than it should be for the time of year.  It was so nice that I summoned Mrs Tootlepedal out to enjoy it too as the forecast is for more rain tomorrow and it seemed a pity to waste such a good moment.

We have three weeks of the Vuelta (the cycling tour of Spain) to entertain us in the coming evenings so that is something to look forward to as the rain beats against the windows.

No flying bird today but an interestingly coloured dahlia instead. 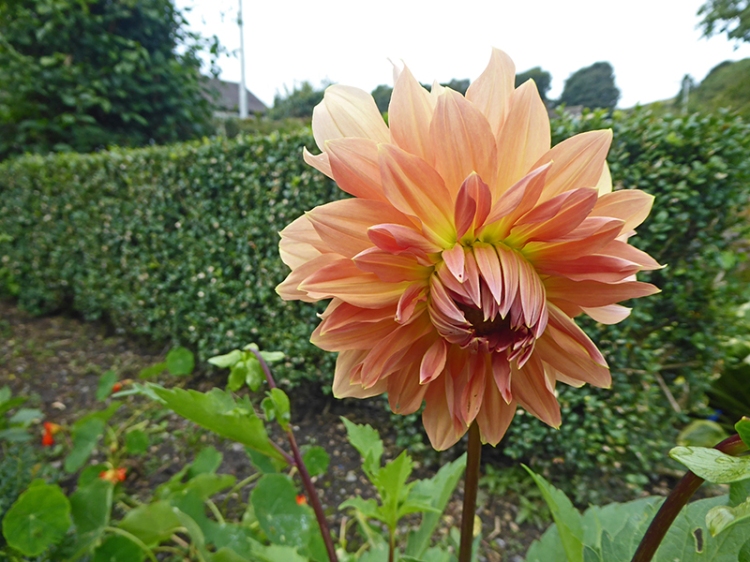