Today’s guest picture comes from Dropscone and shows the roadside repair man fitting a new wheel to Dropscone’s car after he had inadvertently lost the original while driving along. 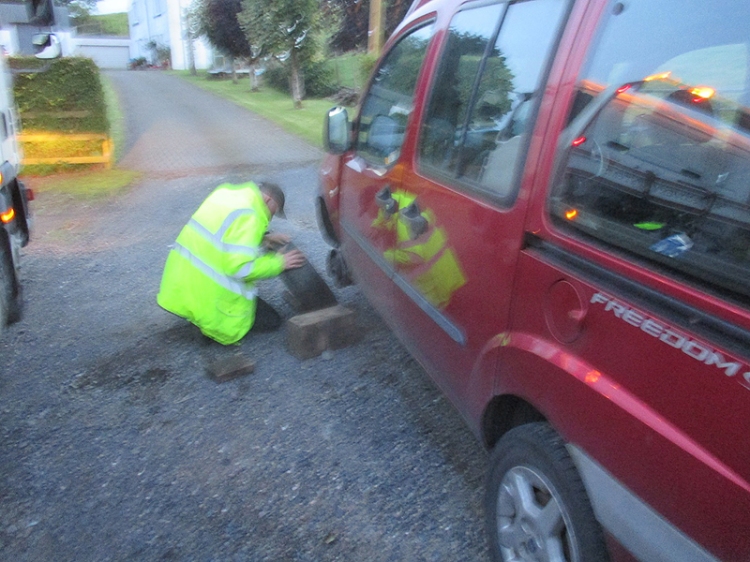 Dropscone arrived for coffee today with a tale of woe.  He had been driving back from a golf event up the borders at the weekend, when he suddenly found himself one wheel short of a full set.  He managed to get the car safely off the road and called for assistance.

Sadly, however hard he looked while the spare wheel was being put in place, he couldn’t find the errant wheel.  It had disappeared into the undergrowth, never to be seen again.

Still, the car (with Dropscone)  was brought back to Langholm on a trailer and it is currently receiving some TLC in a garage and will soon be back on the road.  Dropscone seemed very calm about the whole affair but it would make me lose a bit of confidence in my car if it happened to me.

While I was waiting for him to arrive, I had a walk round the garden.  It was pleasantly warm and still for once but it had rained overnight and there was an air of dampness all around. 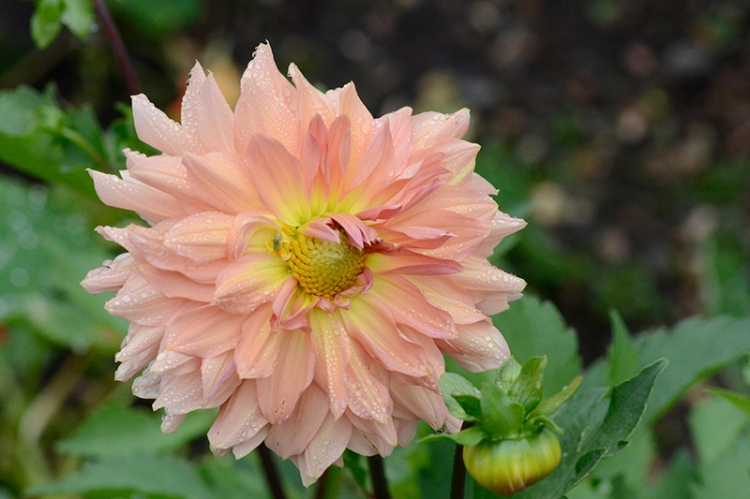 A hint of sparkle caught my eye and when I looked closely, I saw that among the plants, there was a spider’s web suspended…. 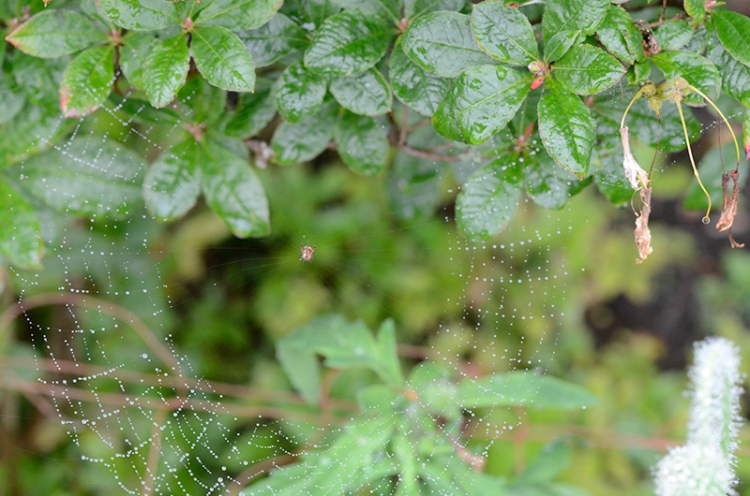 …with the very diminutive manufacturer in residence at the heart of it.

I took a lot of shots, trying to capture the best general view of it….

…and of the tiny spider itself…. 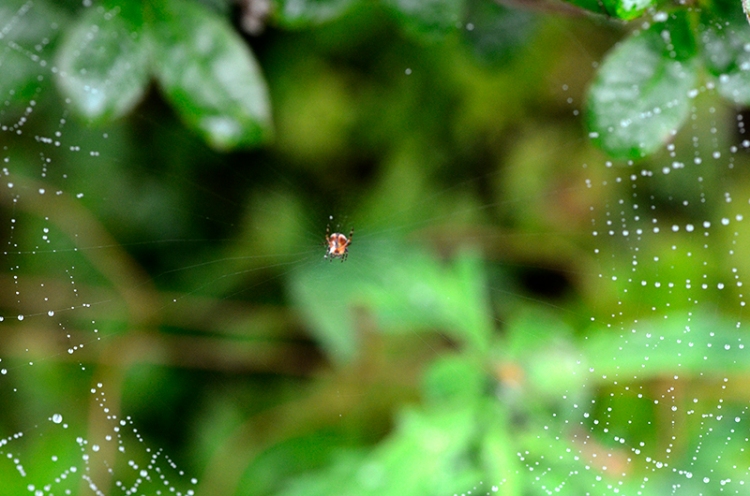 …which was suspended in an almost invisible filigree net.

I even went to the length of getting a tripod out and setting the camera up on it but what I really needed was some sunshine to make everything sparkle.

Still, it was fun trying.

The bees were busy trying to find poppies that had survived the rain.  These two had found a rich seam of pollen…

…but other poppies held no attraction.

They are pretty but fragile.  Later in the day I dead headed over forty poppies.

…and was generally a bit discouraged by how wet things were.  She did think the raindrops on the crocosmia leaves were very pretty though.

Dropscone brought a large mound of drop scones with him and we ate our way through it as he related his adventures.

When he had gone, Mrs Tootlepedal went off to the Buccleuch Centre to help with the lunches and I got my bike out and went round my 20 mile Canonbie circle.  It was warm enough for me to expose my knees to the public and at 70°F or 20°C, it was hot enough to make me careful to drink sufficient water as I went round.  A novel experience this summer.

It was a day when I could have gone further but although my back is improving, my arm had a nasty swelling so I thought it wise to take things gently.  I did take one picture as I went round to show off a quietly green corner of the ride…

….but the muggy conditions had steamed up the lens on my phone camera so it wasn’t very successful.  The old main road, now a cycle track, is being gradually narrowed by the encroaching greenery, year on year.

I gave my bike a good good wash and clean when I got back as I have been pedalling on damp roads lately and then had a late lunch and a shower.

Mrs Tootlepedal got back from the Buccleuch Centre and started work in the garden.   My arm was a bit sore so I wandered about taking a few photographs instead of mowing or sieving.  In spite of the warmth, it had not been a drying day. 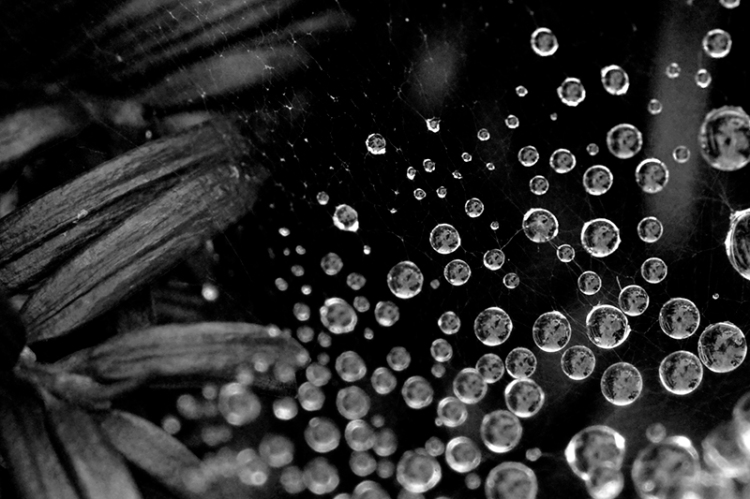 The yew bush was covered in small webs which had caught the raindrops.  I processed the picture so that the web on which the drops are suspended is visible too. 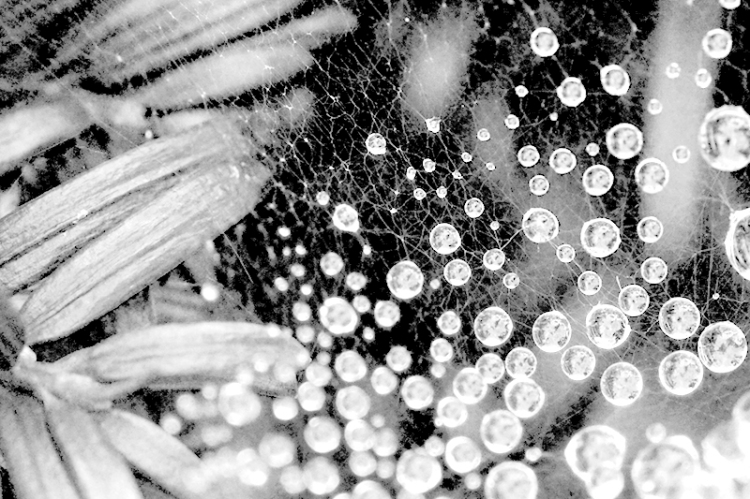 I thought that it looked a bit like one of those neural network maps that scientists produce to show how your brain works.

It was lucky that I had taken the picture when I did because later in the afternoon, Attila the Gardener attacked the bush with loppers and secateurs and all the webs went off to the shredder along with the branches that held them.

Mrs Tootlepedal took great care of the tropaeolum which lives in the yew and it should thrive on the greatly reduced bush.  She found some of the bright blue berries which follow the red flowers.

I noticed a new clematis in a philadelphus… 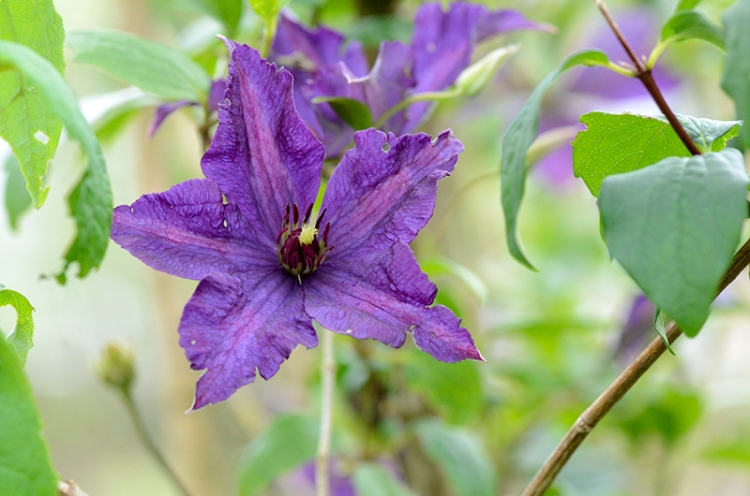 …and I took a couple of pictures of a poppy and a cornflower which brightened up a rather gloomy day.

Then I took my sore arm, which had swollen up slightly alarmingly overnight,  off to visit the doctor.  He diagnosed a haematoma on my biceps caused, he suggested politely, by being a bit old and not having very good muscle tone.  However, as I had feared that I might have torn something serious, this minor injury diagnosis was quite a relief and the advice that it will take several weeks to heal itself was not too hard to bear.

The doctor was not my regular physician and he called for a second opinion just to confirm his opinion that there was no serious damage and this doctor, knowing me well, advised me not to fall off my bike for a bit.  I am going to try to pay very good attention to that helpful instruction.

Once back in the garden, I was able to put the ex yew bush trimmings through the strimmer and so heartily had Mrs Tootlepedal approached her task, that we had to empty the box three times.  It all went back on the garden as a weed suppressing mulch.

Now I know that I won’t do any harm to my arm, I hope to get out for a longer ride before the end of the month as soon the days will be shorter and colder.

No flying bird of the day today but another welcome butterfly visitor stands in. 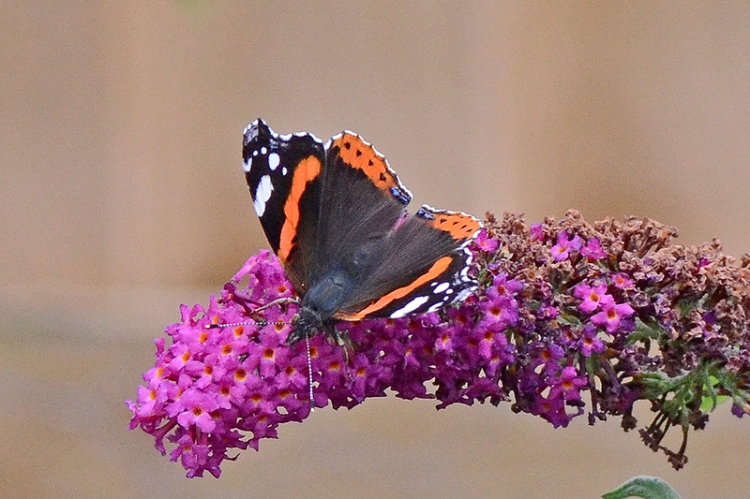 29 thoughts on “Three wheels on his wagon”