Today’s guest picture comes from my South African correspondent, Langholm exile Tom.  He has passed on a picture of a Strelitzia taken by a friend of his.

I started the day by going up to the Archive Centre and meeting with Sandy and Nancy.  Recent work by a plumber required access to a little used cupboard filled with ‘stuff’ and as this ‘stuff’ was now spread all over the place, it looked like an ideal opportunity to sort the ‘stuff’ out and throw most of it away.

Quite a lot of it went into the back of my car and I drove off with it while Nancy did some heroic work with a hoover and a damp cloth.

Mrs Tootlepedal was busy with a paint pot and brush when I got home so I had time to have a coffee, do the crossword and, since it was dry for a while, walk round the garden.

As usual, the poppies caught my eye.  Some have had their centres battered by the bee onslaught….

…but new pollen providers are always coming on stream.

I sieved some compost while I was out.

It was a changeable day and having checked out the weather, I hung some washing out to dry.

Then I took it in again as it started to rain.

After lunch, we took the Archive Centre ‘stuff’ to the council dump near Annan.  It was sunny when we went out to the car so we walked round the garden before setting off.

There were less bees than usual today, perhaps because it had been chilly and wet again but other insects were available.

They had visited the sedum and dahlias too.

A touch of colour caught my eye just as we were getting into the car.

I took a close look at one. 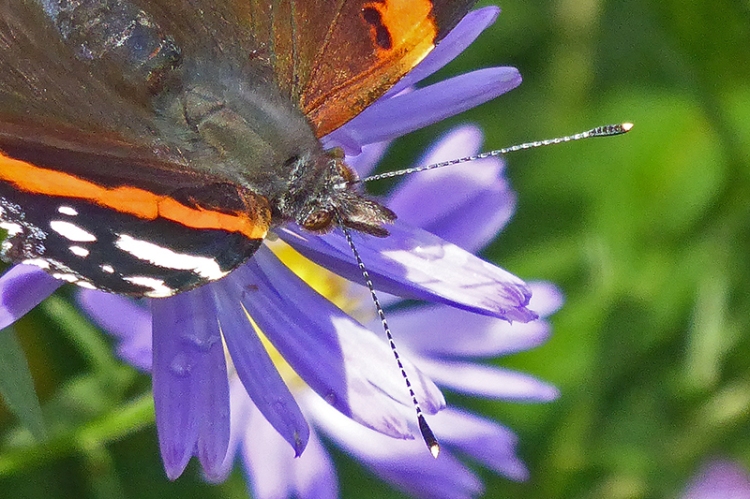 You can’t tell me that it doesn’t have little electric light bulbs built into the ends of its antennae.

Leaving the butterflies to feed, we set off to the dump and passed through a heavy shower of rain almost immediately after we had left the town.  It had poured down on our last visit to the dump but we were luckier this time and it had faired up by the time that we arrived.

The drive back was very pleasant and I had a quick walk round the garden….

…..but it started to rain again not long afterwards so I abandoned any thoughts of cycling and waited until a promising gap in the clouds appeared and went for a short walk instead.

I admired a striking dahlia on my way out of the garden.

It was sunny when I started out and in spite of any amount of threatening clouds….

…it remained dry for my two mile outing.

I liked this yellow flower in particular.

It seemed to float rather than to be attached to its plant.

I walked through the park on my way to the Stubholm and saw what looked like a flock of ominous birds perched on top of a tree…. 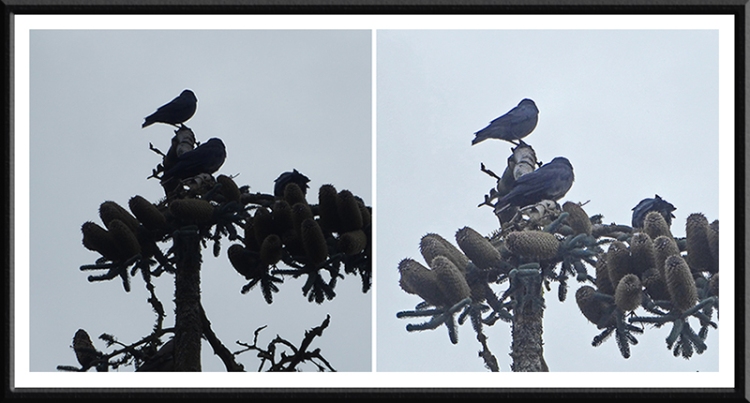 …but a closer look revealed that it was some birds and a lot of noble fir cones.

My walk took me along a picturesque track…. 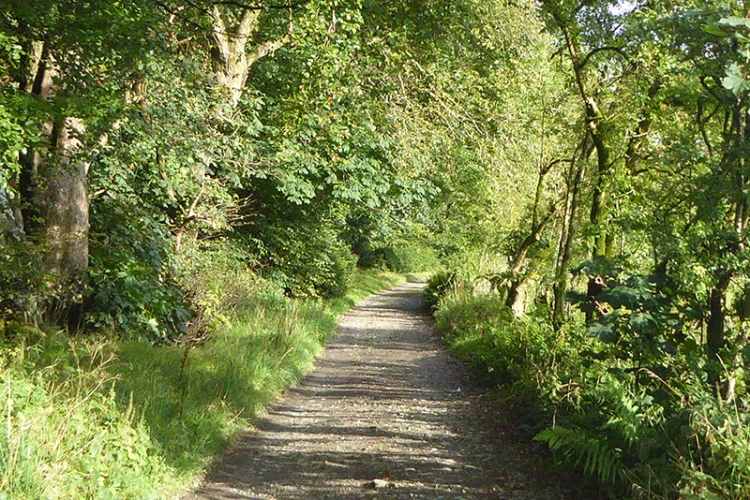 …and past a slightly ramshackle set of stable buildings which I thought might look better as an oil painting. 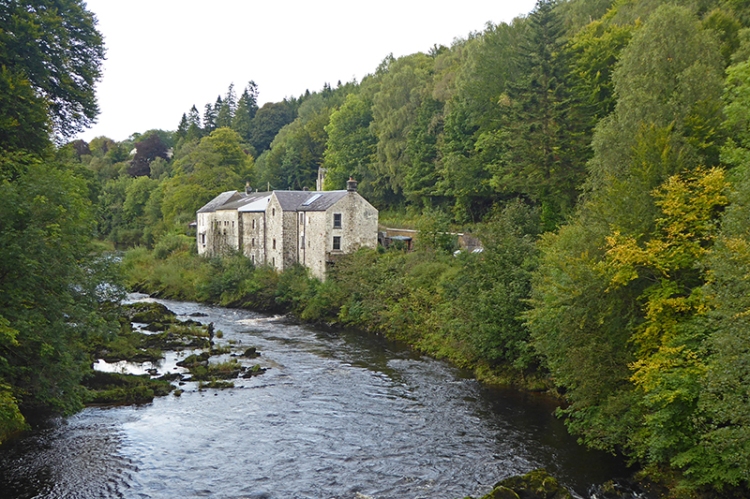 …and noticed that Colin, one of our neighbours, was indulging in his favourite occupation down below me. 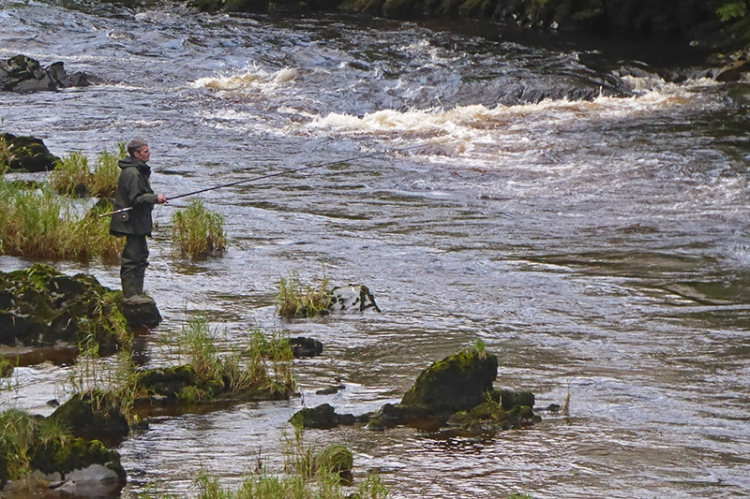 A man of great patience.

Walking back from the bridge on the road side of the river is less interesting than the walk down but there were more yellow flowers to be seen….

…along with some vivid red berries….

…and a dipper below the suspension bridge. 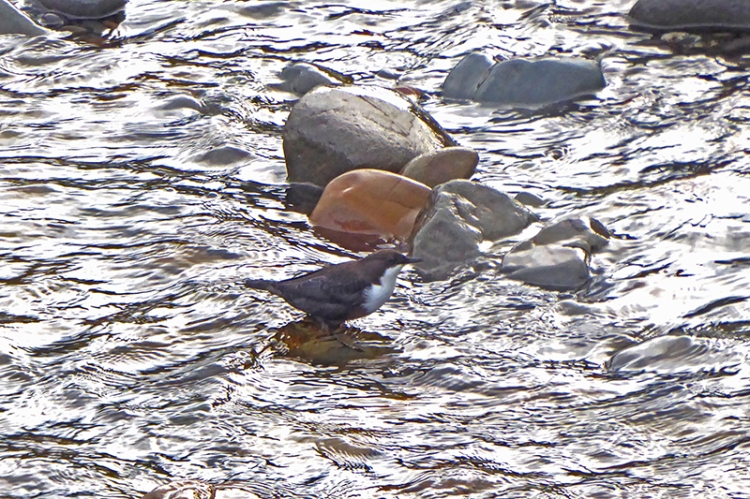 When I got back, I put the some of the accompaniment for the new piece which Luke and I are learning onto the computer and that largely concluded the business of the day.

It had started to rain again after I got back from my walk so my timing was good.  I had met a friend while out walking and conversation naturally turned to our miserable summer weather but in light of events in Houston and the Caribbean, we agreed that it was definitely better to be permanently mildly distressed than to be overcome by a catastrophe.  We counted our blessings.

The flying bird of the day is Mrs Tootlepedal’s completed butterfly.