Today’s guest picture comes from my Somerset correspondent Venetia who failed to get to a windfall quickly enough.

In spite of a better forecast for the day,  it was raining at breakfast time.  I made good use of the time indoors by making a lamb stew for the slow cooker and by the time that I had finished, it had cleared up outside and we got out into the vegetable patch sooner than had looked likely.

We dug up the rest of our potatoes today and although we got a satisfactory crop, several slugs had got there before us and not all the potatoes will make their way to our table. Still, considering what a very soggy summer it has been, we were quite pleased to find the majority of the crop was untouched.

With the potatoes laid out to dry, there was time for a look round the garden.

Then it was indoors for coffee and a quick whizz through a very easy prize crossword before I got the cycling gear on and set out on the fairly speedy bike.  I had waited a bit in the hope that the temperature might rise but it was only a rather cool 14°C when I left the house.  On the plus side, the wind from the north was very gentle.

The weather map had shown rain clouds to the east, the west and the south but indicated that there might be a  channel of sunshine to the north so forsaking my usual gentle routes to the west, I set off north towards Eskdalemuir and the hills.

I am not supposed to pedal up steep hills with my tin knee and my chosen route had quite a few today.  I solved the problem by pedalling up any steep hills that I came to so slowly that my knee didn’t notice and I also took the opportunity to stop and admire the view whenever I kneeded to.

Whether Eden is on this side of the gates or the other depends on your point of view.  Naturally I think that it is on this side, at least on a relatively sunny day like today.

I stopped again, about an hour later to look across the Esk when I had nearly reached Eskdalemuir.

The fields were gleaming with fresh growth after a crop of silage had recently been taken off them.

Looking north up the Esk valley, I could see the big hills in the background.

At this point, much to my surprise and disappointment, the sun disappeared and it started to rain heavily.  The wind got up and it turned very chilly but luckily I had my rain jacket with me and I soon put it on.  In addition, I was nearly at the turning point of my trip so I shortly had the added advantage of getting the rain on my back and not in my face.  All the same, I was just resigning myself to getting very wet when the rain stopped as suddenly as it had started.

I stopped as well, this time to look back across the river at a stone circle… 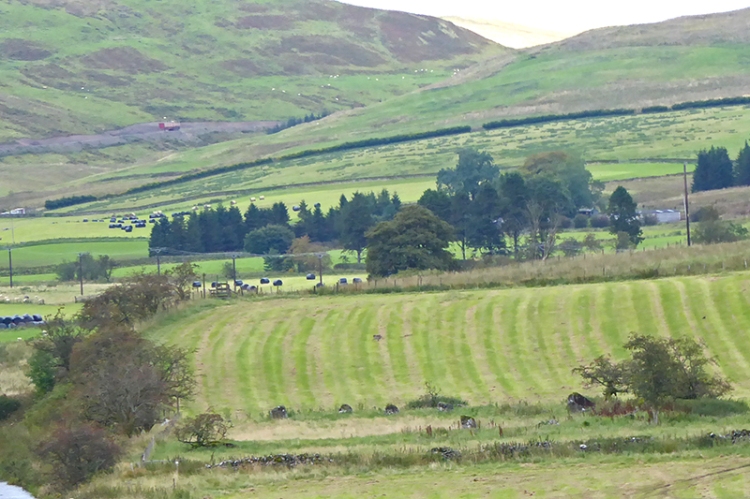 …or rather, half a stone circle as the rest has been swept away by the river over the years.

With the wind behind and some occasional sun about again, I pedalled south cheerfully, stopping to admire a cascade of crab apples….

….a favourite bridge over the Black Esk….

…and a cascade in the Esk below the bridge just after the junction of the Black and White Esks.

Shortly after climbing the hill away from the river, I came to the precise middle of nowhere…

…and took the Lockerbie road over the hill and down the valley of the Water of Milk.

It is very pleasant for a cyclist to see windmills turning…. 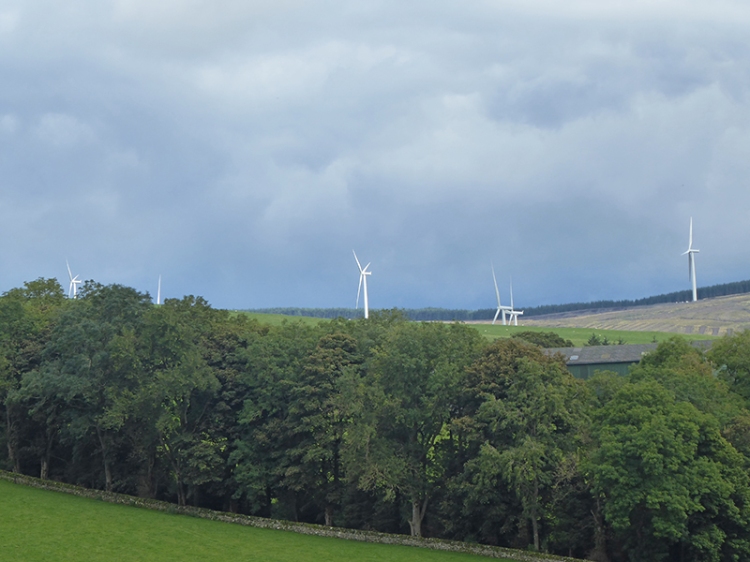 …because at least it lets you know that the wind which might have been holding you back is producing something useful.   I was slightly worried by the dark clouds behind the Ewe Hill Wind Farm as that was the direction that I would soon take.  However, the wind, as well as producing electricity also blew the clouds away before I got there so I felt doubly blessed.

Once I got to Paddockhole, I stopped going towards Lockerbie and headed towards Langholm.  I was on familiar territory and concentrated on pedalling.  Thanks to going at a very steady pace though, I was able to spot an inconspicuous fungus or two beside the road.

I stopped to take a view of our hills beginning to turn brown but got distracted by the top of a concrete fence post instead.

And I couldn’t miss a hawthorn with more berries per square inch than any other tree.

I finished my 34 mile journey over some rather wet roads so those clouds had obviously been moved on just in time.  My average speed was low but my tin knee was pain free so that was fair exchange.

Mrs Tootlepedal was at an Embroiderer’s Guild meeting when I got back so I spent time turning the potatoes over to help them dry out and sorting out the slugged ones and then I had a look for butterflies in the sunshine.

They were not hard to see.  The dahlias were a big attraction to them as the buddleias are almost over.

It was hard to resist taking pictures of it.

Mrs Tootlepedal returned after an enjoyable meeting.  Not only was there a good turn out of regular members but a new member had arrived, having found out about the group at the stitch-in at the Buccleuch Centre last Saturday.  This was very satisfactory.

I will still full of energy after my ride so I got the mower out and mowed the front lawn.  The grass was rather long as it has not been mowed during the recent rainy spell and the going was rather soggy so by the time that I had finished, all my energy had finished too.

We went in for a cup of tea and a slice of bread.

The lamb stew turned out well.  Shoulder of lamb and a slow cooker are made for each other.

The day was rounded off by a double dose of virtual cycling as we watched highlights of both the Vuelta and the Tour of Britain.  Our admiration for the bravery and fitness of professional cyclists is unbounded.

The flying bird of the day is a questioning cow.

I append the map of my route today.  You can see from the elevation that it was much more hilly than my customary routes hence the slow speed but it had better views by far.