Today’s guest picture comes from my friend Bruce who was in Edinburgh yesterday and was comforted by the up to date police protection afforded to its citizens. 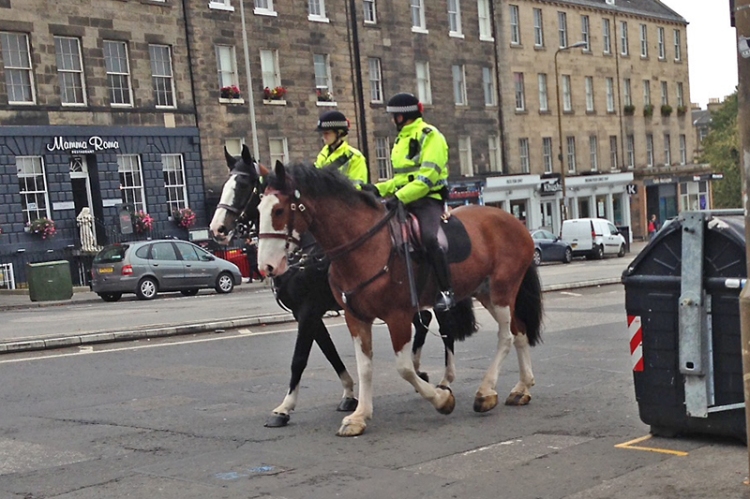 I had much better weather for my trip to the Moorland Feeders today and it was only a pity that the birds stayed away in great numbers.  I suspect that a sparrow hawk must have been in the vicinity.

The pheasants aren’t frightened of anyone or anything, being hand reared. 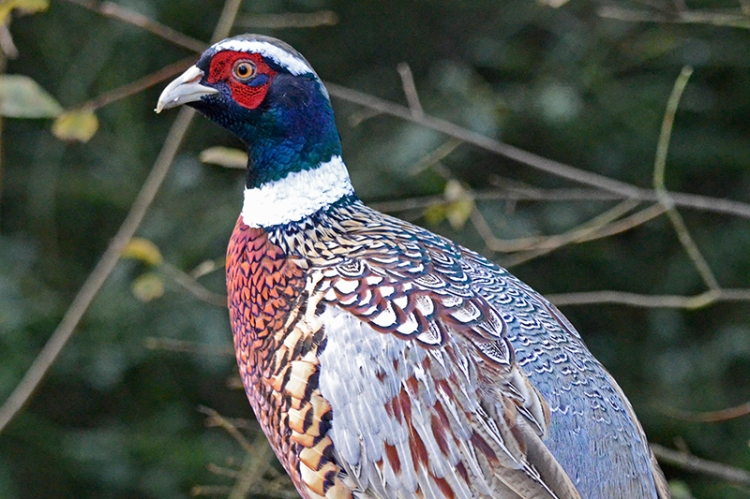 …and occasional chaffinches popped up here and there. 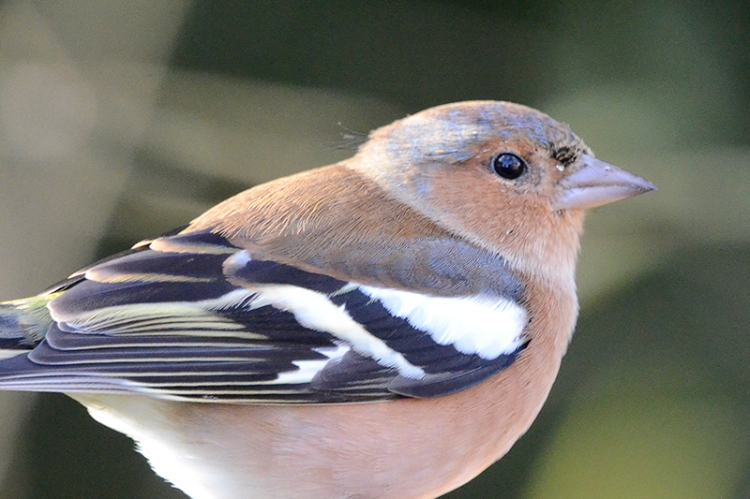 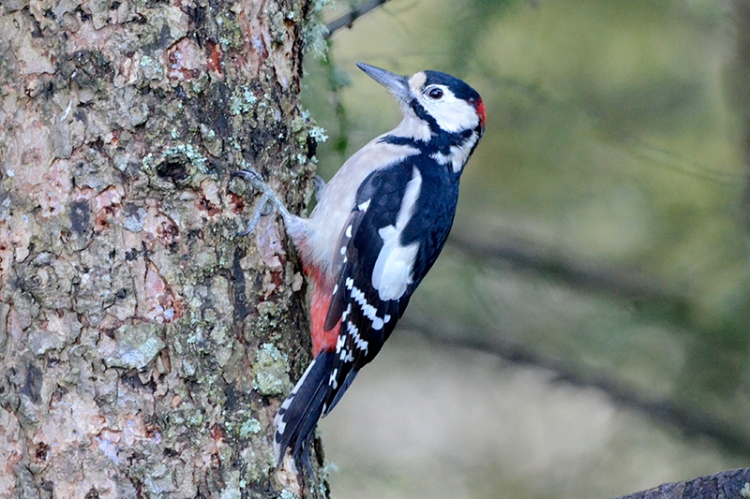 …and that was about it so I didn’t stay long.

I saw a crow on the top of the walnut tree when I got home and my new lens made light of the distance. 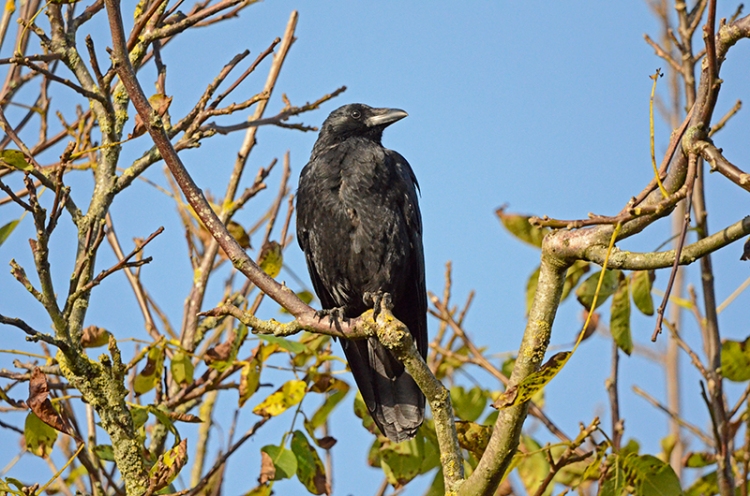 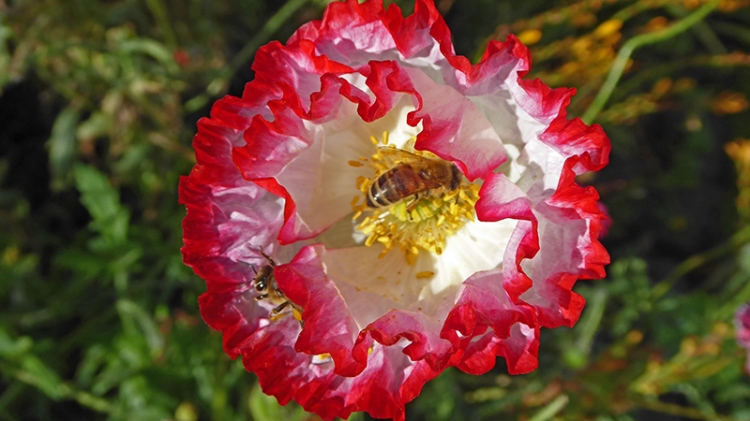 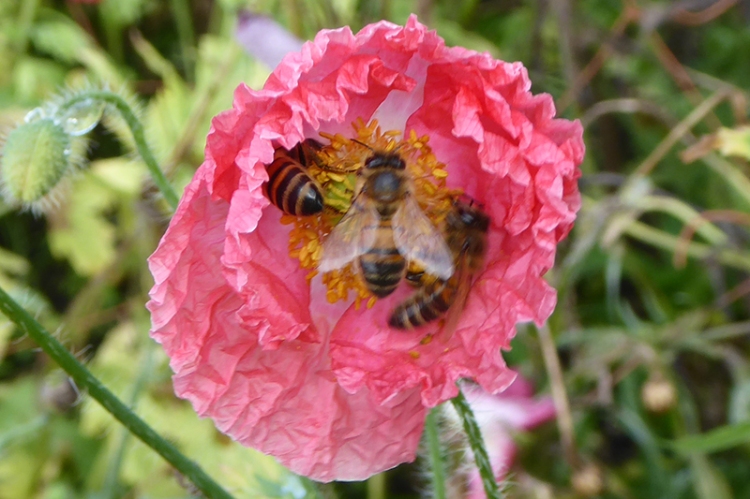 …and a butterfly or two too.

The reason that I didn’t have long to garden wander was that I wanted to get a quick pedal in before lunch.

…and down to Canonbie and then back along the banks of the Esk…. 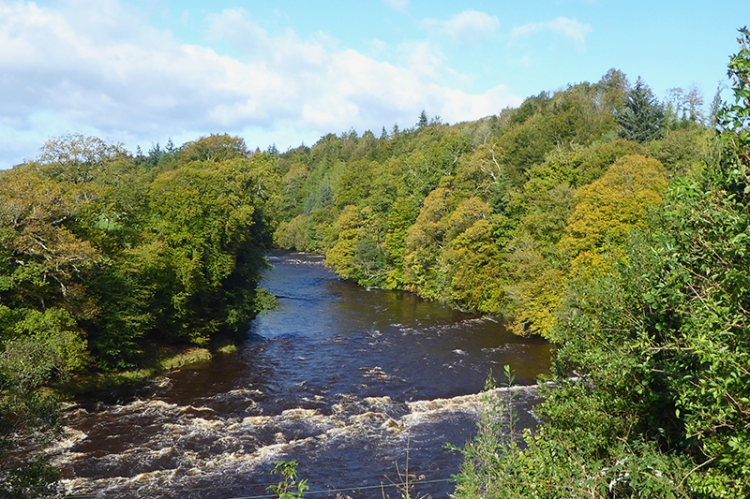 …which had plenty of water in it after yesterday’s rain. 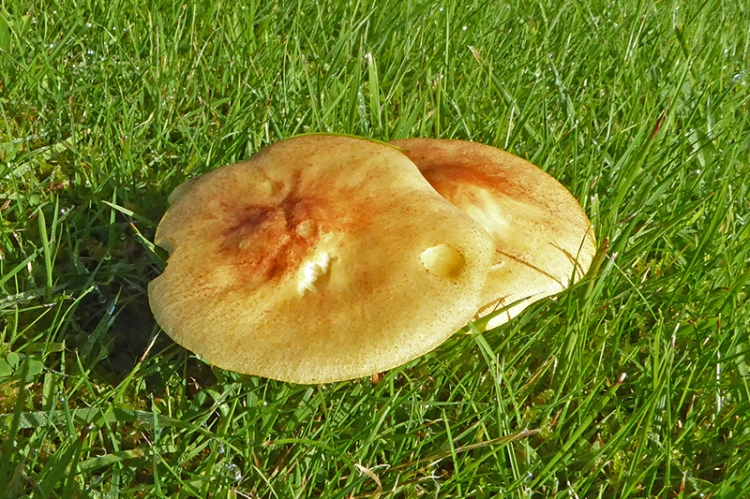 …and they have come back again this year.  There were dozens of these fungi sprouting on a plain patch of mown grass.

I had been blown down to the bottom of the by-pass by a friendly breeze so the journey back to Langholm was a bit more like hard work and as I was under some time pressure, I didn’t stop for more pictures.

I went  fast enough to have left time for another quick look round the garden after a shower and lunch.

I saw another butterfly…or perhaps the same one revisiting,  It was hard to tell at this angle. 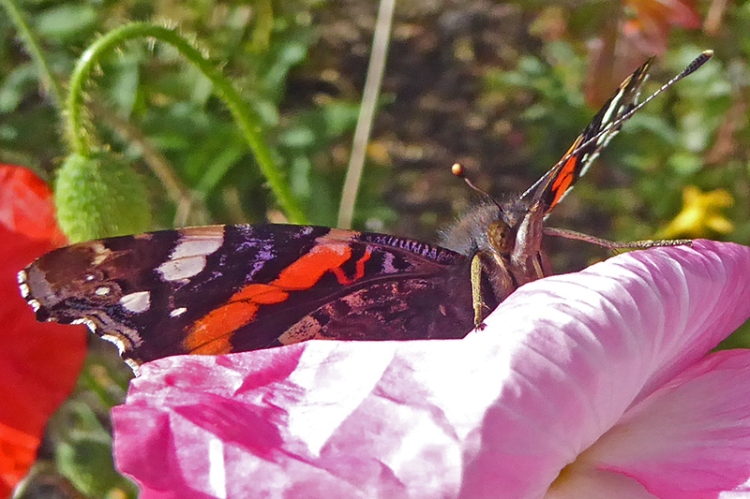 Then I drove off to Lockerbie with Mrs Tootlepedal to catch the train to Edinburgh.

I admired a fine set of faintly nautical looking hinges on a doorway in Lockerbie opposite the spot where we parked our car. 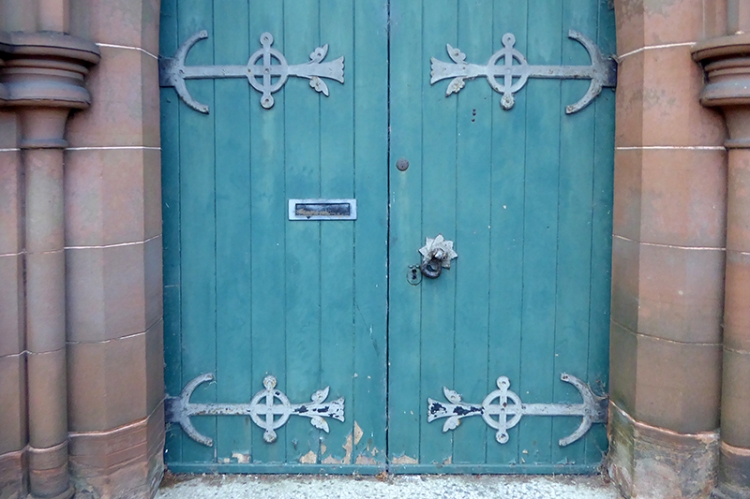 Lockerbie station has two just platforms, up and down, with a passing line behind the down platform but looking south from the bridge, It must have been busier at one time. 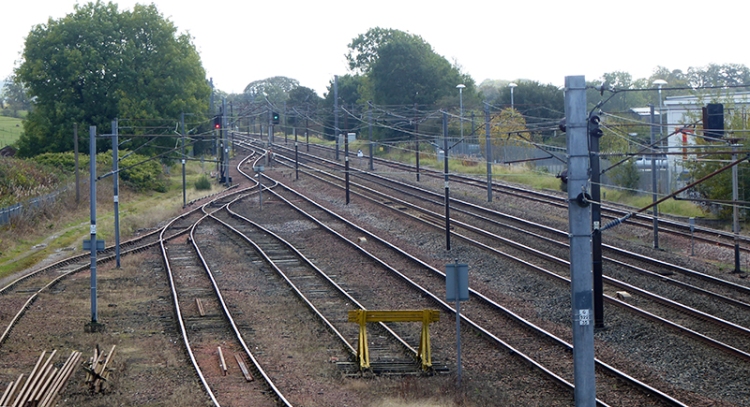 The train was late again but only mildly and the countryside looked lovely as we swept past so all was forgiven.

When we got to Edinburgh, Matilda was in splendid form and gave me a very even match at Pelmanism before trouncing me at Snap.  There was more fun before tea time when we were terrorised by a monster…. 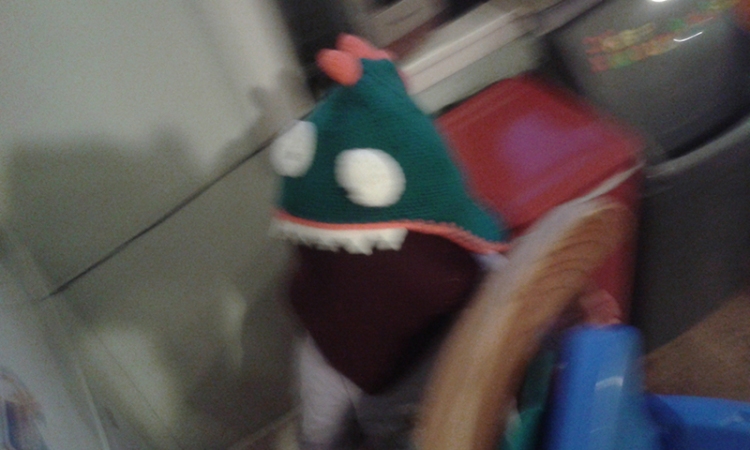 …who surely can’t have been related to this studious little girl studying her miniature cow. 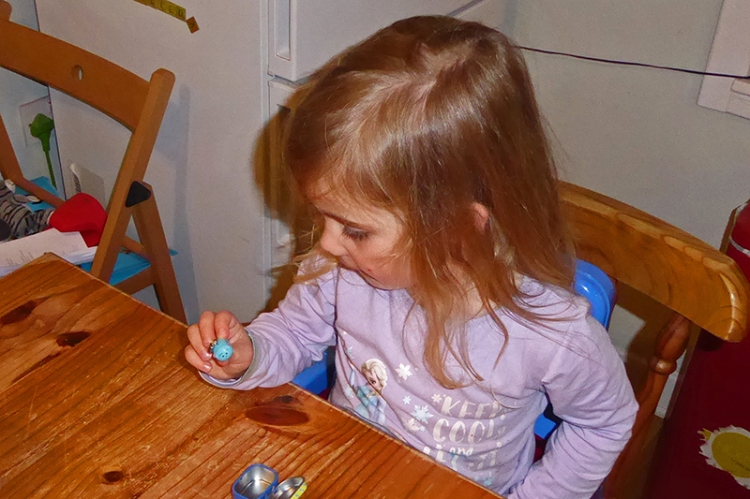 All too soon it was time to catch the train back to Lockerbie.  The bus arrived so promptly and drove so swiftly that I had time to look around at Waverley Station and enjoyed this circle of ornamental youngsters round the skylight in the waiting room.

Our drive home from Lockerbie was illuminated by a brilliant moon.  I tried my new lens out on it when I got home and was pleased with a quick hand held shot from an upstairs window. 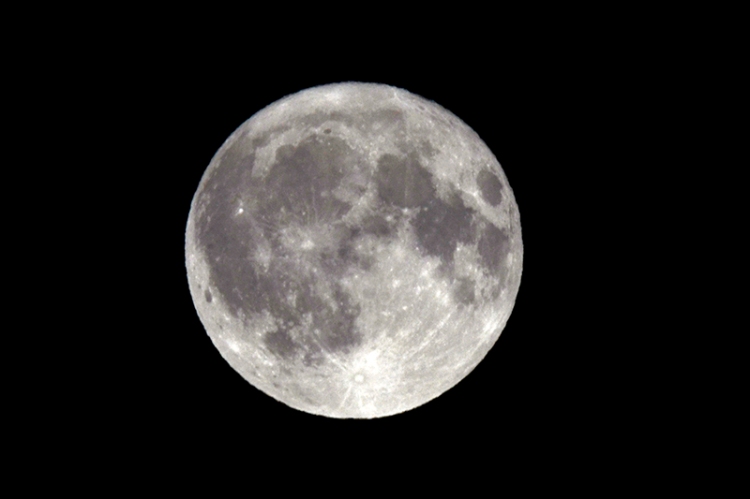 There was not much choice but I managed to get a flying bird of the day at the Moorland Feeders this morning….just. 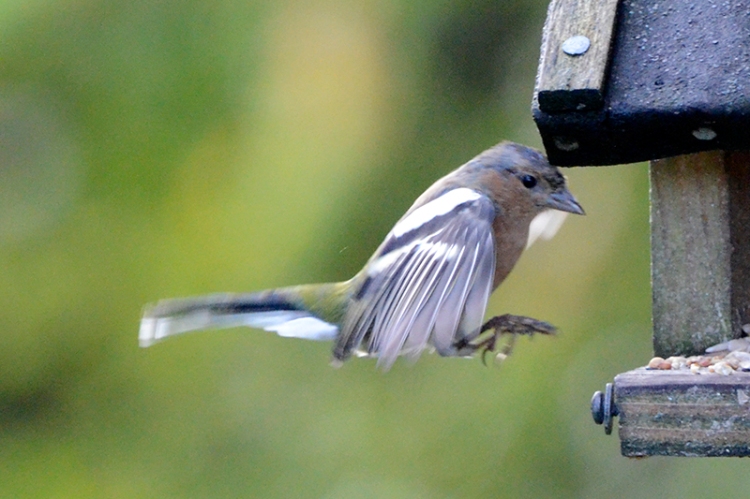 32 thoughts on “A woodpecker, a pedal and some Pelmanism”