Today’s guest picture comes from Irving, who sent me this fine shot of the bottom of Bealach-na ba on the way to Applecross, one of the most spectacular roads in Scotland.

We had another day of frozen sunshine here, with temperatures at zero or below all day.  However, with stories of snow and slush in England, we certainly weren’t going to complain about a little tingle in the cheeks when we went outside.

It was still freezing hard when Dropscone came round (on his bike) bearing scones to go with our morning coffee.  He has just come back from seeing his eldest son in the south of England and had managed to avoid all the traffic chaos caused by wind, rain and snow recently so he was feeling quite smug.

After coffee, I tempted Mrs Tootlepedal out for a walk to enjoy the sun.

When we got to Pool Corner, we found the the Wauchope had completely frozen over…

…and it was definitely a good idea, where possible, to direct one’s feet to the sunny side of the street. 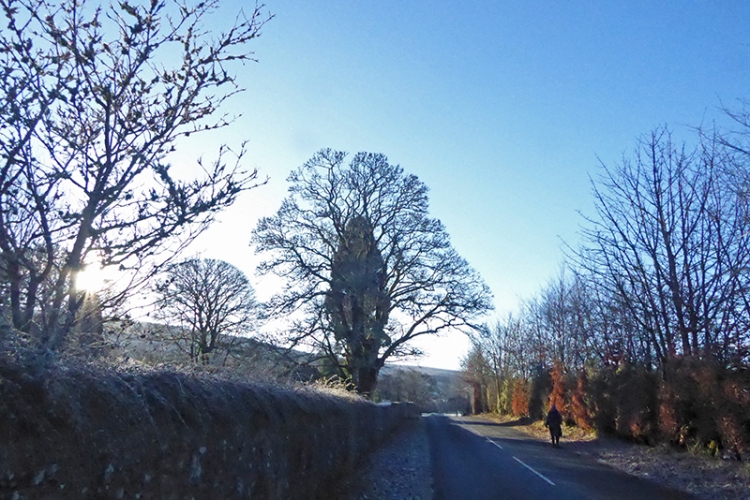 The sharp eyed reader will be able to spot Mrs Tootlepedal heading for a patch of sun.

I always like the combination of sycamore and cypress which line up so perfectly as you walk along the road here.

The absence of leaves, lets the lichen on the roadside bushes have its moment in the sun.

I try to keep an eye on fencepost tops on a day like this.

When we got to the Auld Stane Bridge, we could see that there was enough running water there to keep the Wauchope mostly free of ice.

We turned onto Gaskell’s Walk and I was looking for hair ice because this is a spot where it can often be found.  Unfortunately, a lot of the dead wood that grows the hair ice has been cleared and this small and not very exciting sample was the only bit around.

On the other hand, there was any amount of decorative frost to be seen as we went along the track.

I particularly liked two patterns which had formed on one of the small bridges on the track.  The Y shapes are wire netting which has been put there to improve the traction on the bridge on slippery days.

…as even the low winter sun (10 days to go to the Winter Solstice!) had a bit of heat about it.

We had to keep our eyes down for quite a lot of the time as there were plenty of icy patches along the track but we made it up to the Stubholm on safety…. 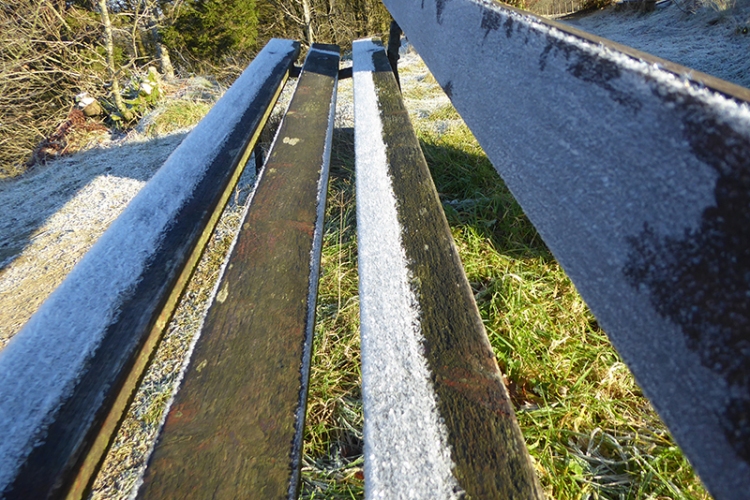 …and resisted any temptation to spoil the patterns on the bench there by sitting on it.

As we came down the hill to the park, Mrs Tootlepedal spotted this fine crop of icicles…

…and this curious frozen formation on the track itself.

When we were out of the sun, it was a very blue day, chilly to feel and chilly to look at.

The benefit was the great number of interesting frosty things see.  This was some moss on the park wall.

And this was the frozen dam behind our house when we got home.

I made some warming potato and carrot soup for lunch and with the co-operation of our bread making machine, a dozen rolls, a couple of which we ate with our neighbour Liz who came round for tea later in the afternoon.  As she left, Mike Tinker arrived so we were well supplied with visitors today and this cheered up the cold late afternoon.

In between times, I looked out of the kitchen window.

I put out an apple and it disappeared into blackbirds in the twinkling of an aye.

This one looks as though he might have most of it. 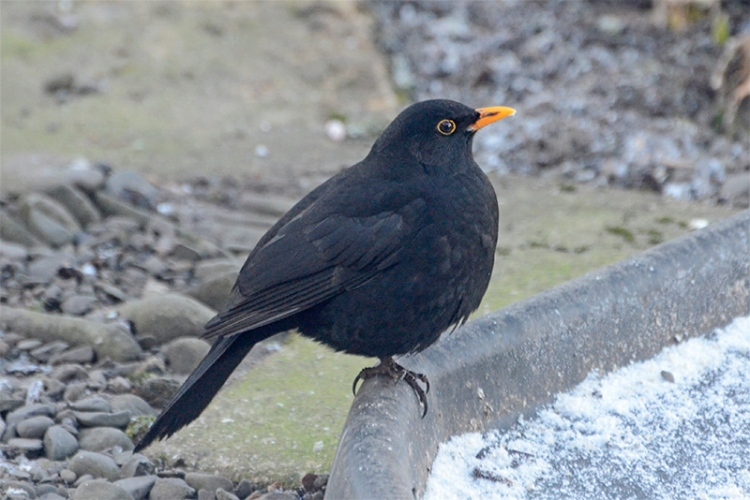 The strong contrasts in the light and shade makes catching birds in the air tricky at the moment but I liked this dramatic scene.

Robins are easier to spot.

As are sitting birds.

My flute pupil Luke came in the evening and we had another go at our new sonata as well as working on the Quantz as well so he will have plenty do if he finds himself with an idle moment at home.  (I need to practise as well.)

Our Monday trio group is not going to meet again until the new year so although I miss the playing, I wasn’t entirely unhappy to have a quiet night in after travelling to Edinburgh and then having two concerts in the last four days.

I am hoping to get a few more cycling days in before the end of the month but the forecast is not optimistic.

The flying bird of the day is a chiaroscuro chaffinch.