Today’s guest picture comes from my ex-colleague Ada.  She has been enjoying the sun in Tenerife and sent me this picture to torment me as we watched the snow come down here.

Here is the contrasting view from our bedroom window this morning.

And it kept on snowing for some time… 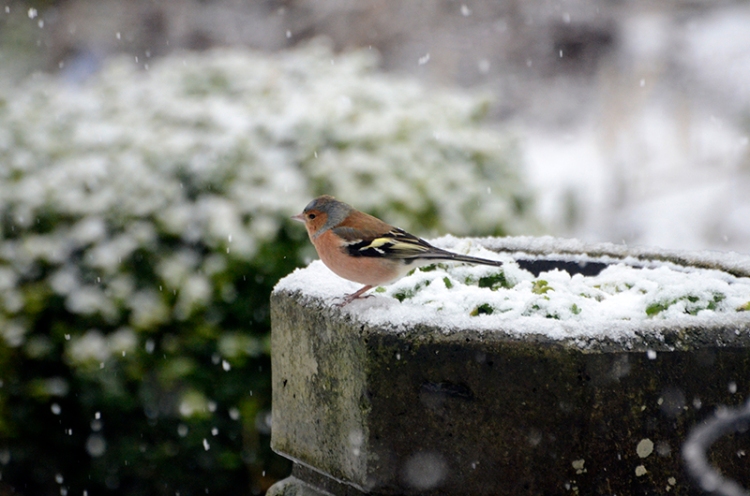 …leading to some poor manners at the ground feeding station. 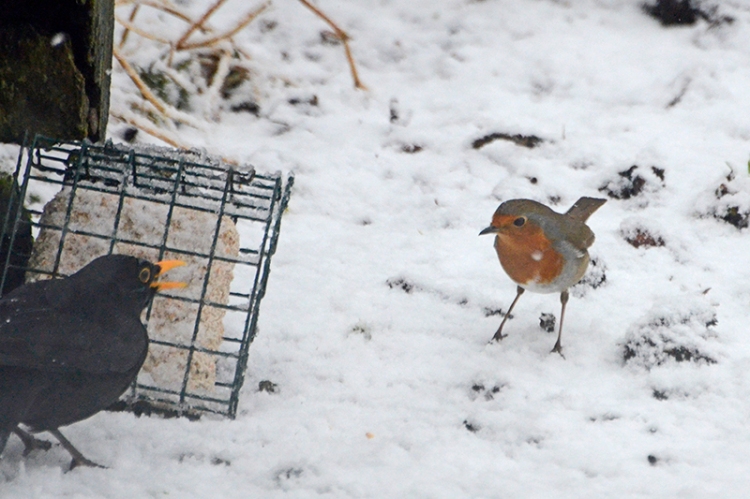 Dropscone dropped in for coffee, not only bringing the traditional scones but also rich gifts of sardines which he had picked up at a very reasonable price on his way back from a meeting up the borders last night.  He is an expert at finding very good ‘end of day’ offers at supermarkets.

The price of the sardines reflected the fact that today was their last use by date so Mrs Tootlepedal and I enjoyed pan fried sardines for our lunch.  They were very good.

The snow stopped and the day brightened up a lot….

….so when Mrs Tootlepedal went off to help out at the Buccleuch Centre coffee shop, I put on my wellies and went for a walk.

I checked on the bridge as I set out.

The men had only worked for a relatively short time this morning but whether that was because of the snow or because they are waiting for things to set, I don’t know.

I left the bridge and headed for the top of Warbla, hoping to get there before any new snow showers appeared.

In fact, as I walked up the hill, the skies cleared and the sun came out, first on nearby hills…. 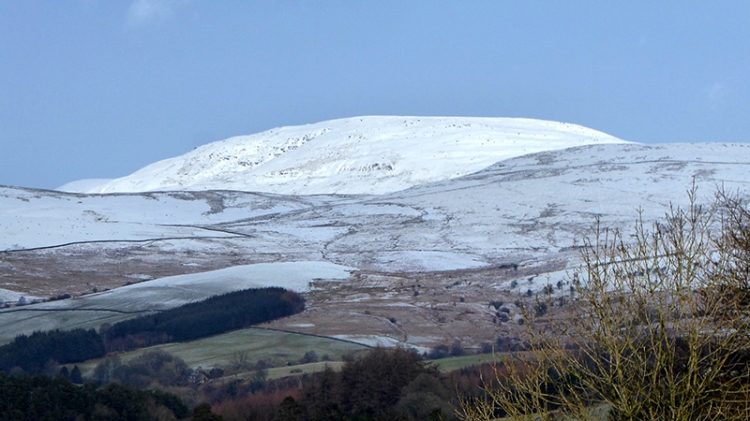 …and then, as I followed the advice of the pheasants to go this way… 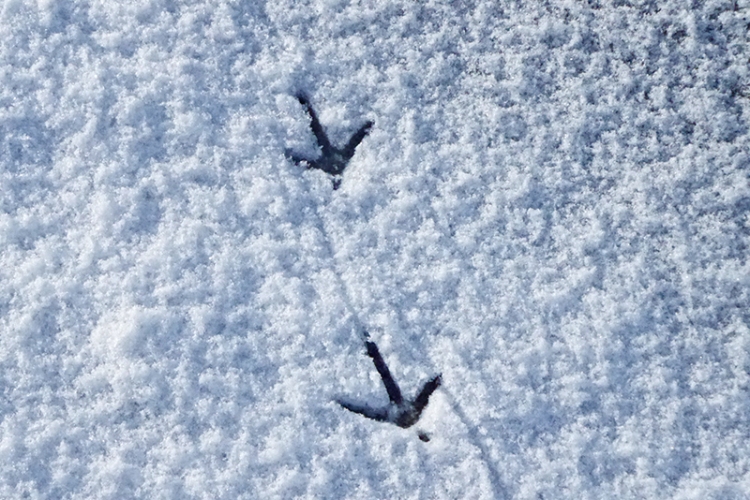 …on the track where I was walking.

Even more pleasingly, it stayed out for the rest of my walk and I was able to enjoy a view across the valley to the felled Becks Wood which I visited a  day or two ago.  They have been very busy tidying the felled trees up.

At the top of the hill, there is an old trig point, elevation 276m, which showed which way the wind was blowing this morning… 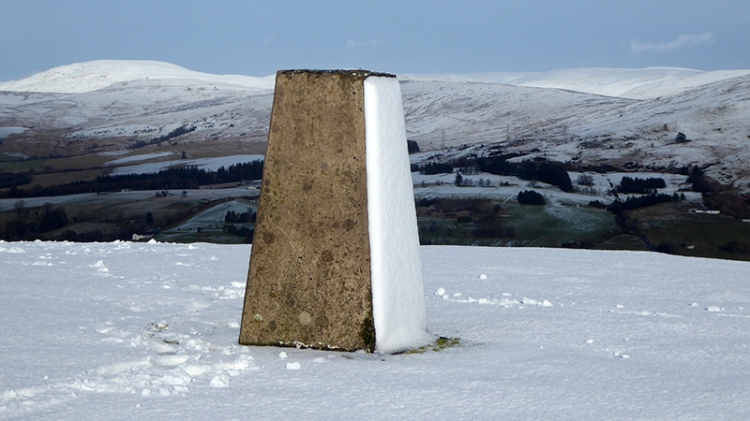 …and some good views. 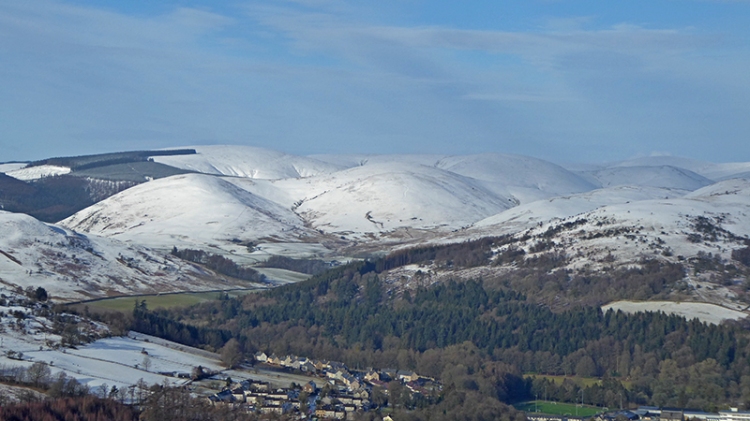 By this time, the sun had removed all the snow from the lower slopes.

I met a man in a car at the summit, where there are several masts, who told me that he was working for EE.  As EE is the telephone company that provides my mobile reception, I was pleased to see that they were on the job even in snowy conditions.

I used the phone connection while I was up on the hill to show that my face is pretty well back to normal after the ugly business of 12 days ago.

I put the fairly rapid healing down to liberal use of arnica.

I thought that the redundant stile at the top of the hill was looking good but went through the new gate beside it on my way down. 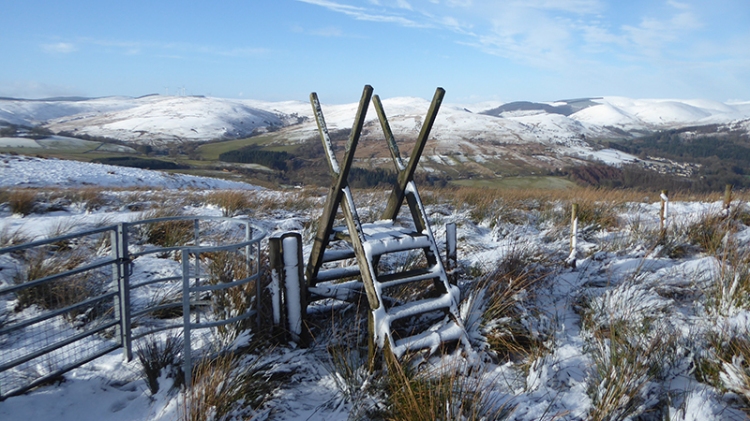 I had noticed as I had come up the hill, that the telephone engineer’s car had stopped several times and the driver had got out for some curious reason.  As I followed it back down the hill…. 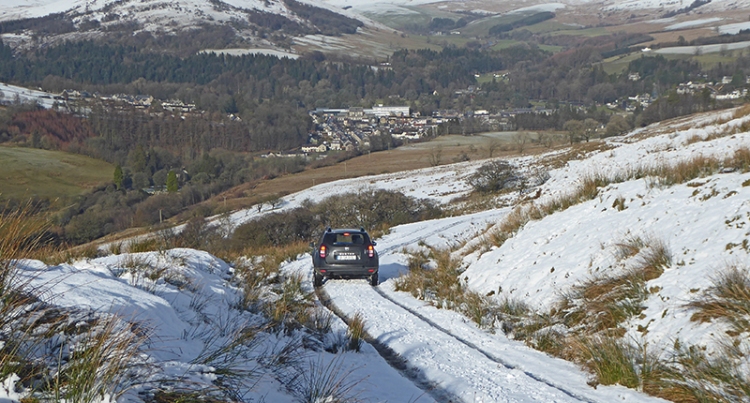 …it stopped several times again.  The mystery was solved when I saw the driver get out and take photographs.  It was good to know that he was enjoying the views as much as I was.  He kindly offered me a lift but it seemed like too good a day not to walk.  Besides, I wanted to take more photos.

Looking across the valley, I could see three timber wagons waiting to pick up logs from the enormous pile at the Becks Wood.

When I got to the wood at the bottom of the hill, I stopped to look at the moss on the wall.  Although moss often looks rather short and stumpy on a wall, if you pull a single strand out, it turns out to be longer and thinner than expected. 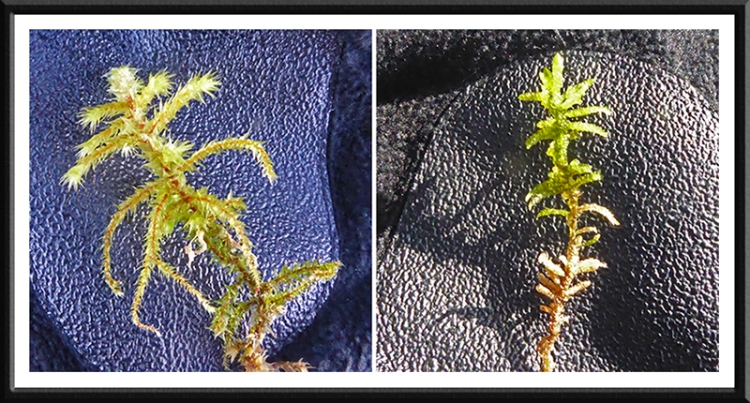 Once again, there were a lot of different sorts of moss close together.

I passed a very sunny horse….

…and made my way back to the garden where I got quite excited by a daffodil bud.

I had made a lamb stew in the slow cooker in the morning and Mrs Tootlepedal cooked some potatoes and green veg to go with it and the resultant evening meal made a good ending to day which turned out to be a lot better than it had looked likely to be when we woke up in the snow.

The flying (jumping) bird of the day is one of the starlings leaving the feeders.

41 thoughts on “Rising above it”