Today’s guest pictures (there are two of them) show that snow was spread from London to Edinburgh today.  They come from our son Tony in Edinburgh and our daughter Annie in London.

And to fill up the sandwich, here is Langholm at midday. 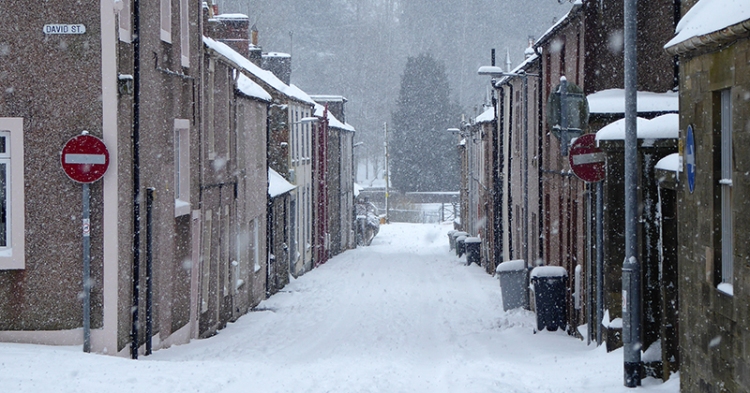 In the end, we got more snow than either Edinburgh or London and rather surprisingly finished up with 6 inches by the afternoon.

It snowed on and off all day.

WARNING FOR BUSY PEOPLE:  There are far too many pictures in today’s post so just take note of the snow and get on with your life.

I had to put on the full set of waterproof clothes and boots to go up to the town for a cup of tea and a meeting with a mover and shaker on a possible call for the Archive Group to be involved in an arts project.  It is all very much up in the air at the moment but the mover and shaker is very articulate and persuasive so funds may appear and the thing take off.  It sounds quite exciting.

On my way home, I went over the Langholm bridge but it was snowing hard enough to spoil the view.  I noticed that it was cold enough to have ice forming on the river’s edge. 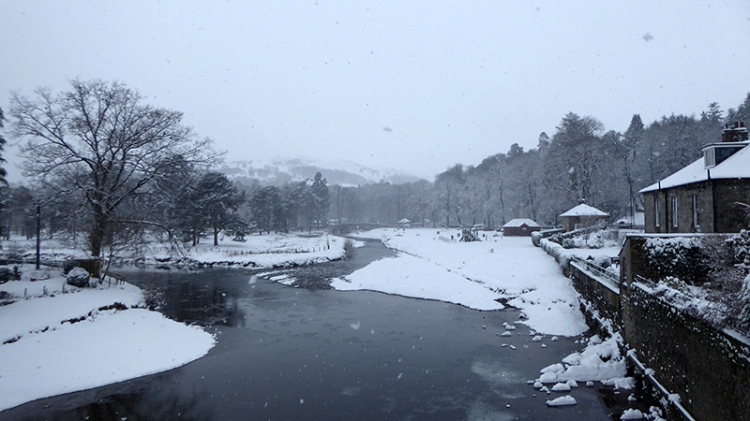 We used to have more snow I think,when we first came to the town forty years ago and looking in the records, I see that the last serious snow fall here was in January 2016 and the one previous to that was quite late in the spring of 2013 so today’s minor blizzard was a bit of a novelty.

I spent a lot of the day watching birds.  Mrs Tootlepedal kept an eye out too and noticed a single brambling while I was out.  She took a shot on her camera and as there were a lot of other birds about, I have tinkered with her picture to pick out the brambling.

She also saw a lot of starlings and unlike the brambling which didn’t come back, they returned. 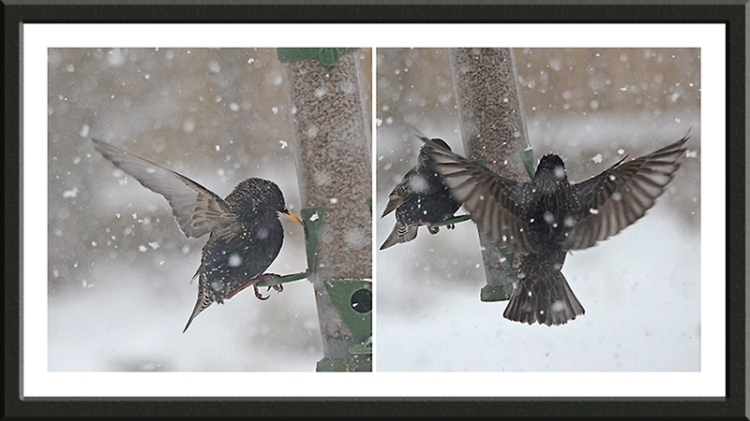 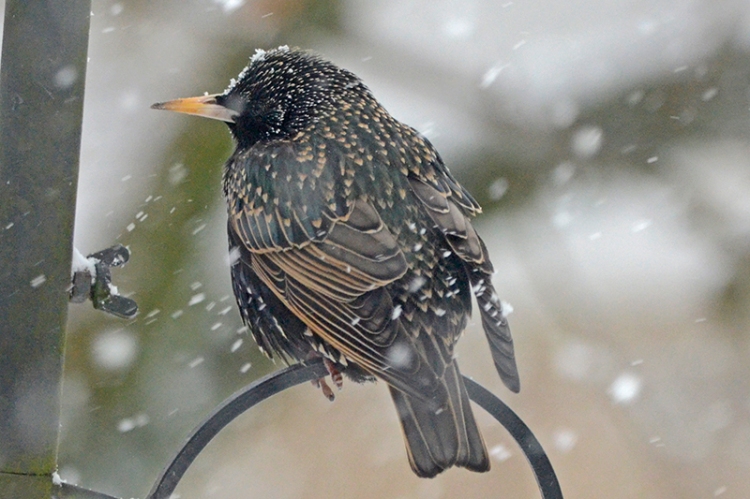 We also had a visit from a song thrush, a very rare visitor to our garden. It sat on the plum tree for a while, assessing the situation and then… 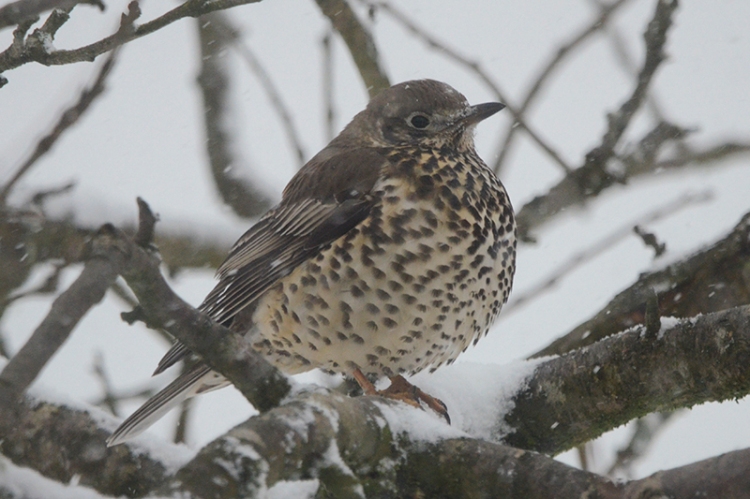 ….returned to try out the feeder. 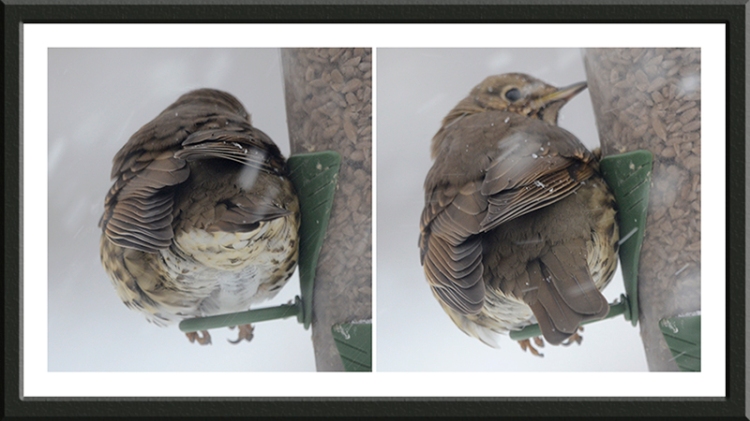 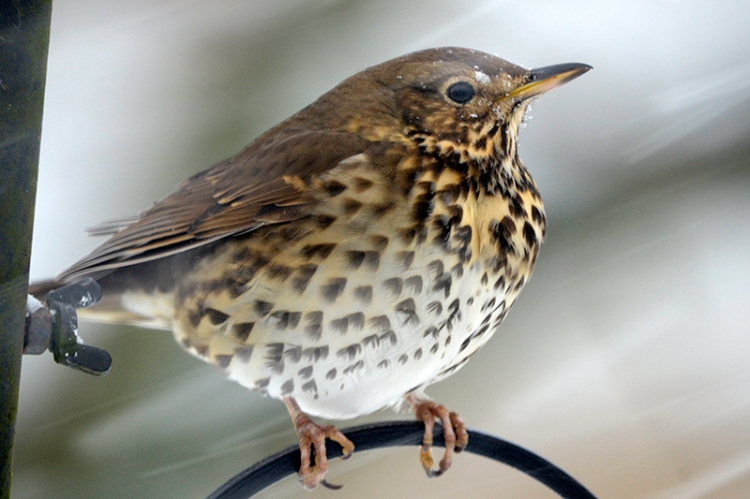 …and then went off sulking. 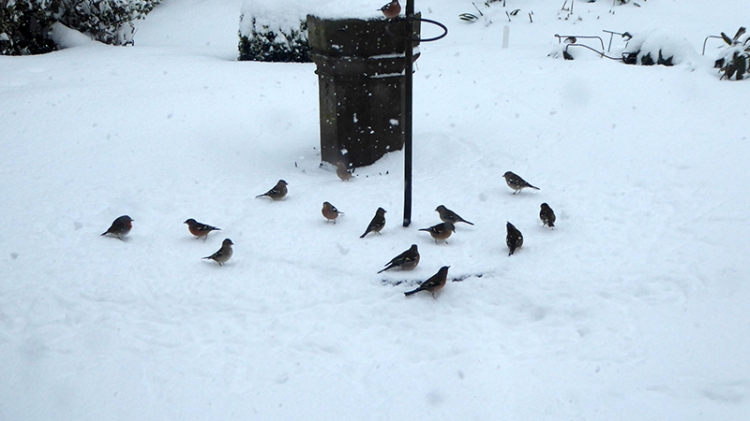 …as well as a flock in the plum tree… 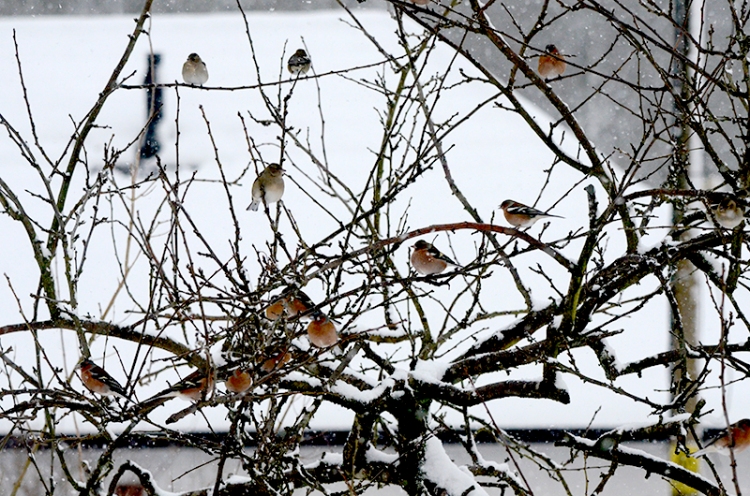 …and a usually a whirlwind round the feeders themselves. 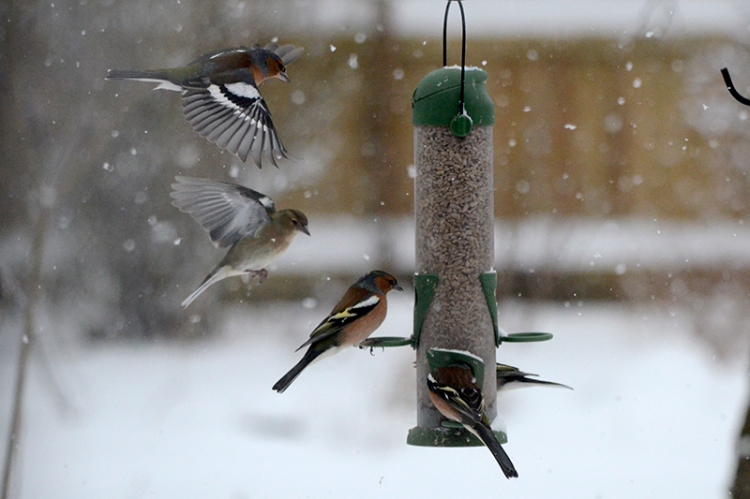 We could count thirty or forty birds at a time.  The odd goldfinch turned up too… 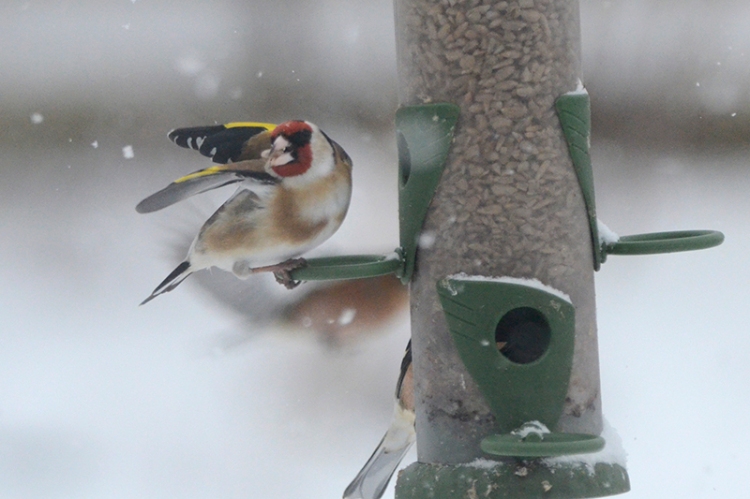 …but it was mostly a chaffinch day.

On the ground what looked like a dropped glove…. 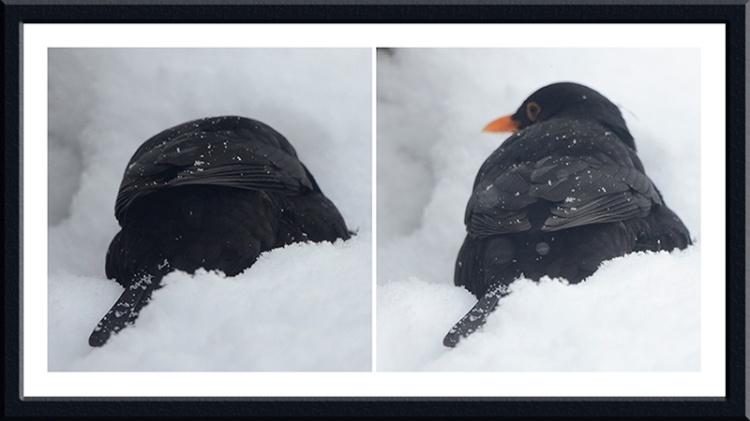 turned out to be a blackbird which was digging for buried food.

And a small black blob turned out to be a robin, perfectly spherical to beat the chill. 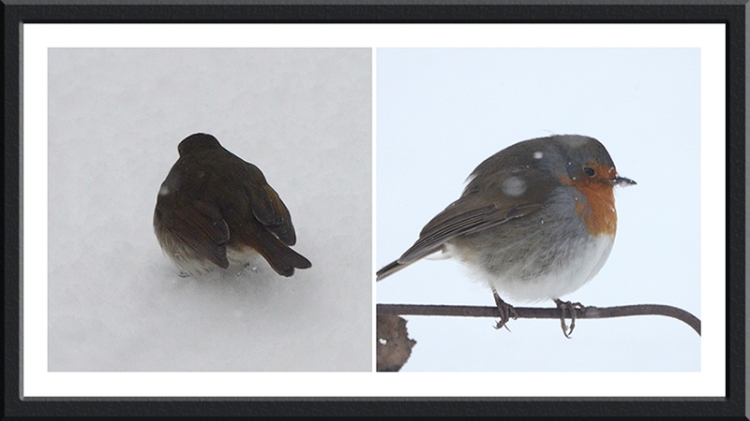 A dunnock shrugged its shoulders against the wind. 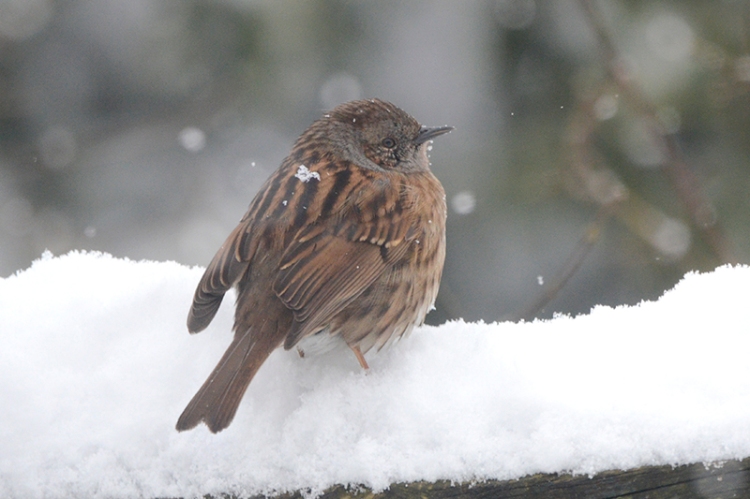 And the blackbird found a better placed food block on the chimney pot. 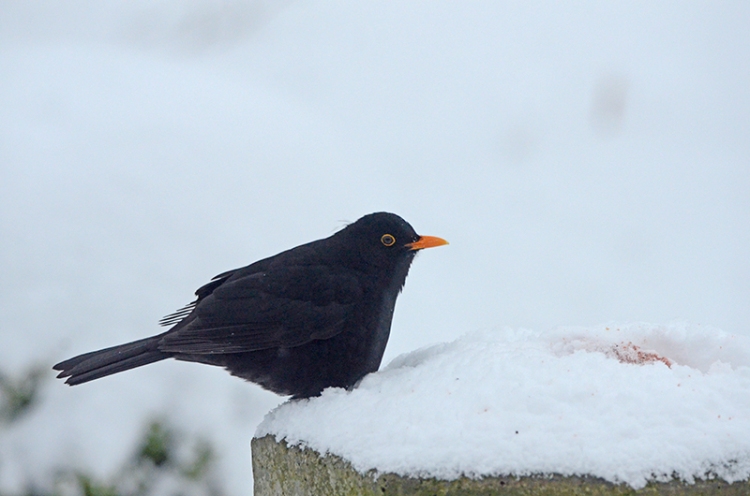 Sometimes birds seem to be a stupid as people and in spite of there being several empty perches, this chaffinch thought it best to gratuitously stamp on another one. 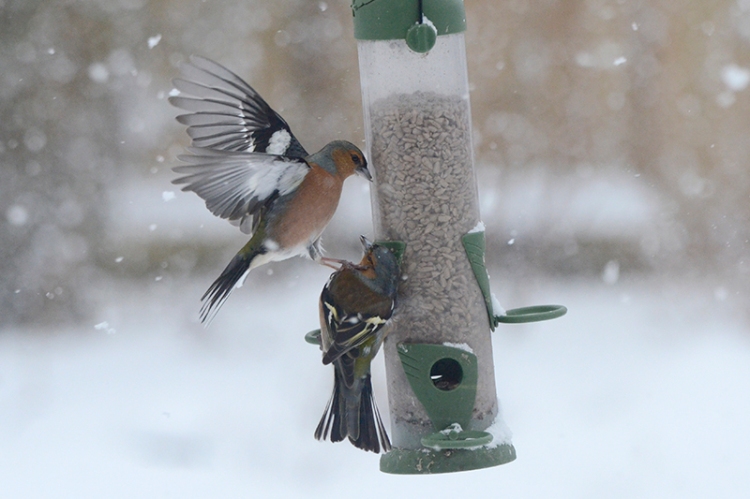 I hope it gave itself a sore toe.

After lunch, Mrs Tootlepedal decided that a walk down to the Co-op would be a good excuse for taking a little exercise and as it had actually stopped snowing, we got well covered up and went off.

I took a camera of course. 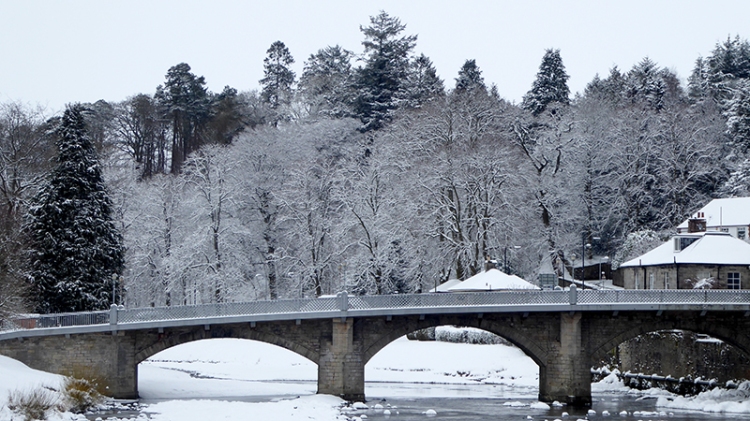 When we had done a little shopping, Mrs Tootlepedal headed for home and I walked on to Skippers Bridge in the hope of some winter wonderland pics.

I was quite glad of the exercise, which was strenuous not least because when they plough the roads to get the snow off, they just push it onto the footpath and this makes for smooth running for vehicles and heavy going for elderly pedestrians. 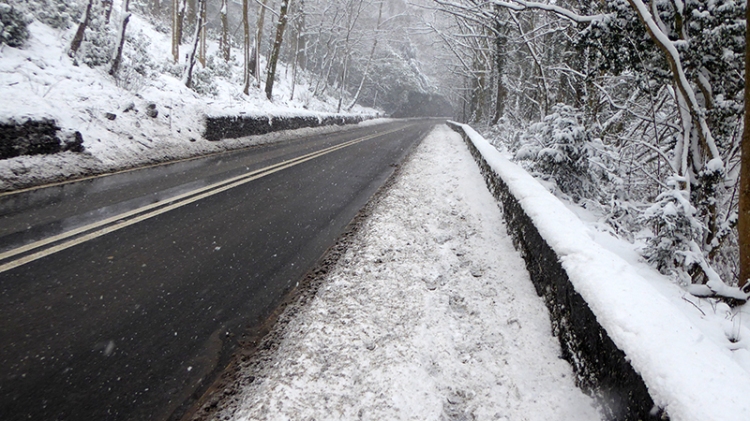 As I walked, the snow got heavier and heavier and this put paid to any picturesque shots of Skippers Bridge… 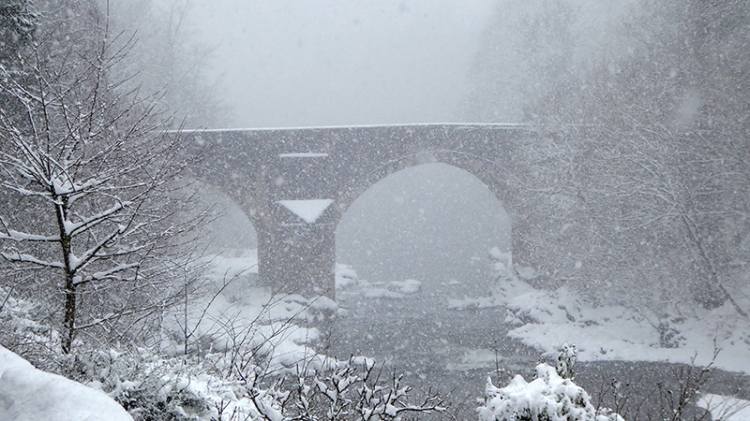 …so I settled for a close up of catkins among the snow as I walked back on the other bank of the river. 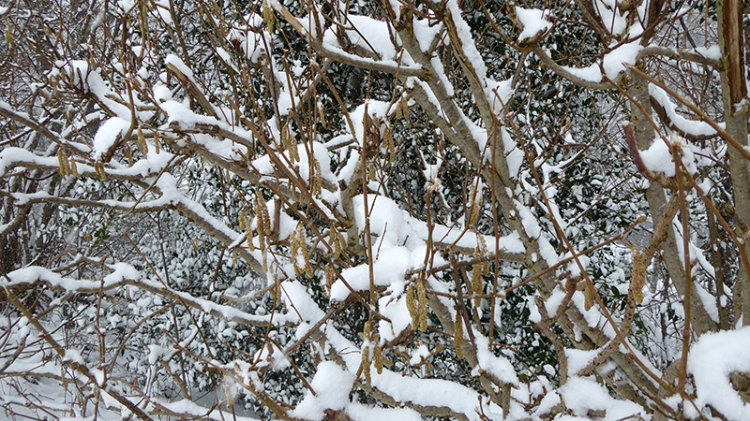 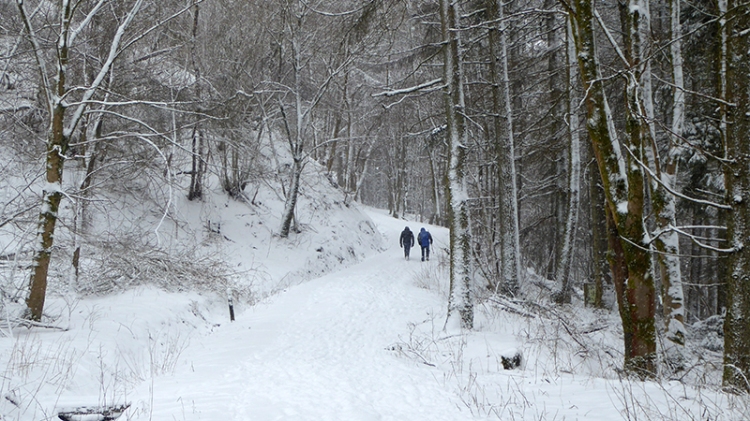 …and then went back home by way of a diversion along Gaskell’s Walk from which I got this view of a snowy Eskdaill  Street. 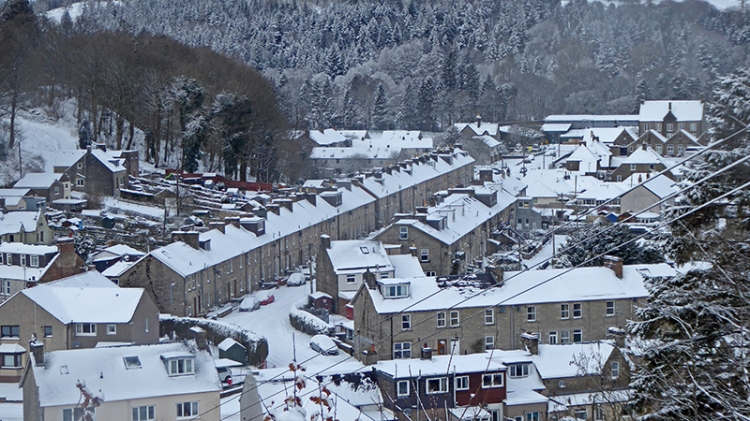 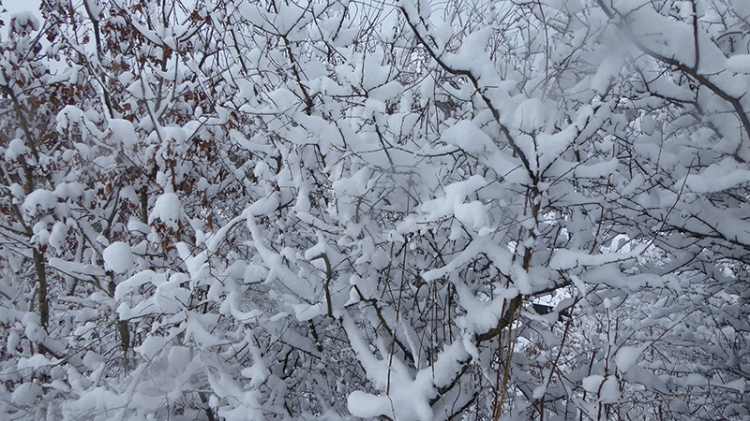 …but I enjoyed looking across at the snowy trees at Pool Corner. 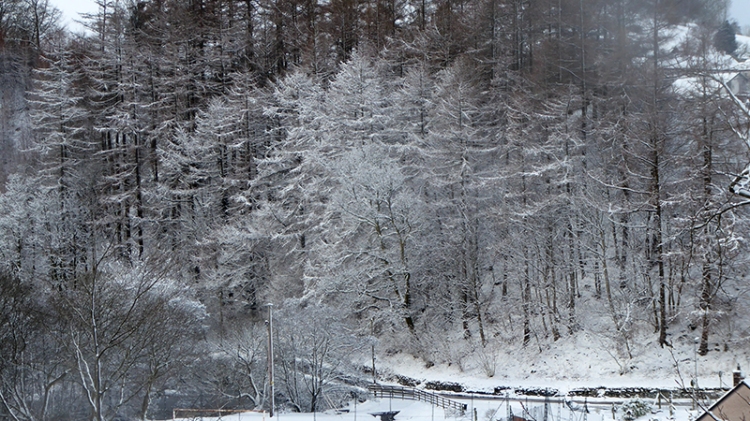 On my way along the road from the Auld Stane Bridge, I passed a scientific snow depth measuring device…. 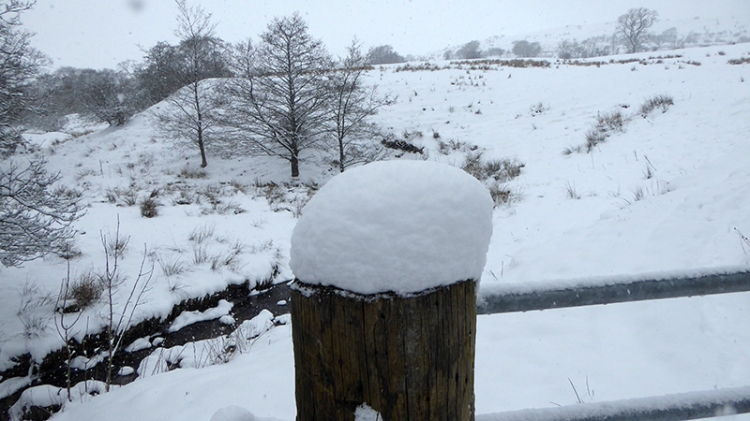 …and an ice covered pool at Pool Corner. 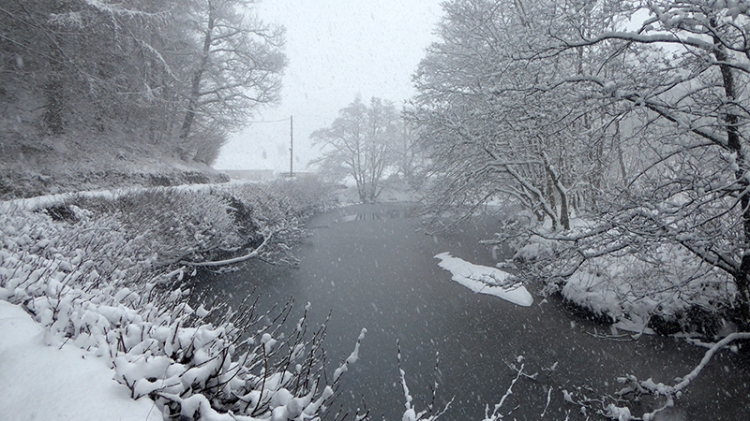 The temperature stayed around 1 degree all day today and it is to be colder tomorrow so with a bit of luck, we will have avoided the icy conditions that come with thaw and freeze.  Still, if need be, I have an old pair of Yaktrax which can be called into service.

There are warnings of more snow tomorrow so we will just have to wait and see.  If there is more snow, I hope it comes with some sunny spells to keep a snapper happy.

Today’s flying bird is a chaffinch. 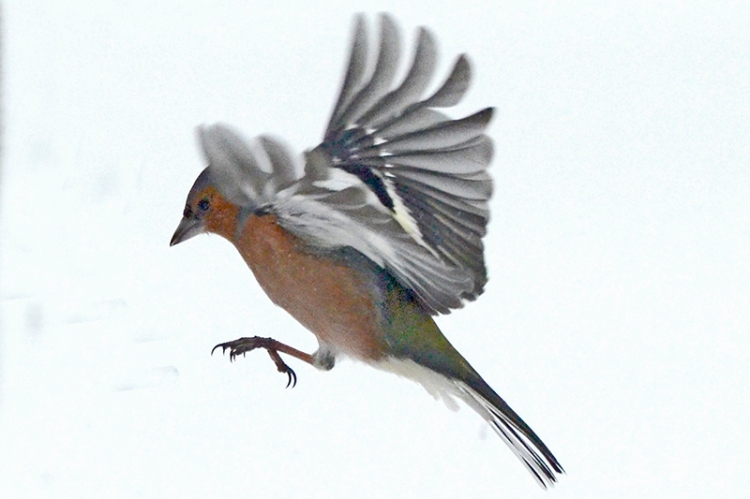