Today’s guest picture comes from Mary Jo from Manitoba who has been visiting Denmark and was impressed by this ratty mural in Copenhagen. 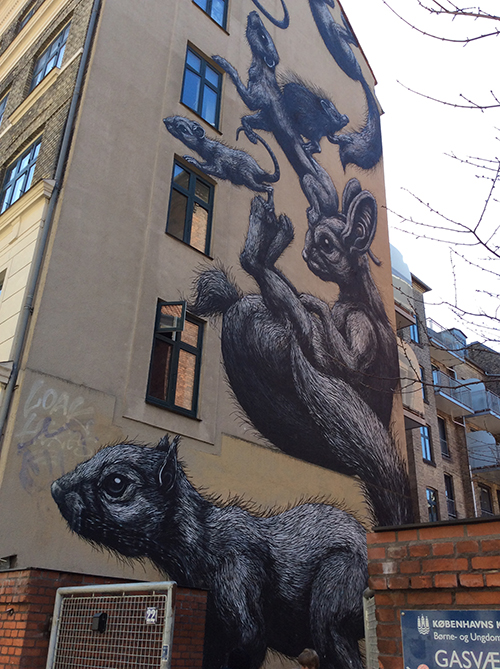 We had rather ratty weather  here today, grey and occasionally drizzly but it was warmish and the cold winds had dropped so we made the best of it.  Fortunately, yesterday’s sore rib had miraculously cured itself so that helped a lot.

The birds made the best of it too and arrived at the feeder in droves all day.

I spent five minutes after breakfast looking out of the kitchen window to get the following sequence of avian activity and I could have taken roughly the same scenes at almost any time of the day.

…siskins scared the feathers off other siskins…

…and once in place, the redpoll ignored the goldfinches… 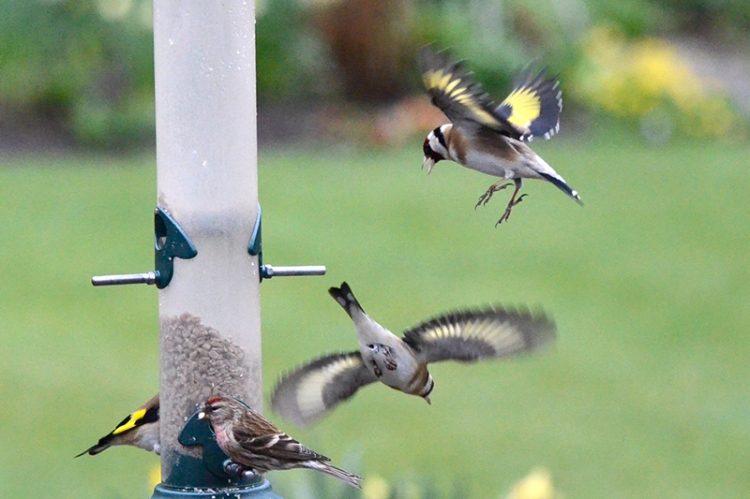 …even when they got up close and personal.  They are the most imperturbable birds I know.

The goldfinches had to resort to being beastly to each other.

But generally there was mayhem. 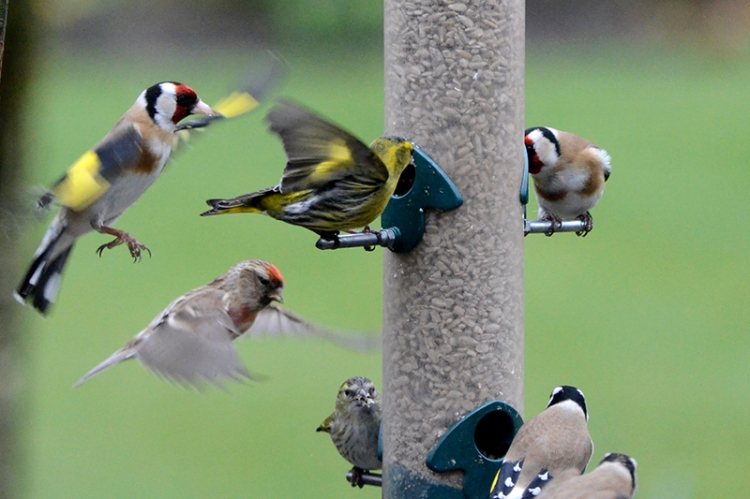 That was five minutes of action between 9.47 and 9.52.  Mrs Tootlepedal looked out of the window and remarked, “There are just too many goldfinches.”

Then Dropscone arrived with treacle scones for coffee.  There won’t be any treacle scones next week as he is off on holiday again, this time to what he hopes will be the sunny shores of Majorca.  He is an enterprising traveller.

After he left, we went out into the damp and gloom and Mrs Tootlepedal with the aid of a spirit level and some help from me got the first two of the four new vegetable beds into their final position.

Two down and two to go.

I took a picture of a clump of miniature daffodils as ‘daff of the day’ but when I looked at the picture on the computer, I found that they are so tiny that some heavy overnight rain had splashed mud all over them, rather spoiling the picture.

Leaving Mrs Tootlepedal to make fine adjustments to the levels on the new beds, I went in and made some potato and onion soup for lunch.

After we had lunched on the soup, Mrs Tootlepedal went back out into the garden and I got the slow bike out and did my standard short 20 miles circuit down to Canonbie and back.  It was nine degrees and the wind was light so pedalling was undemanding but the conditions were gloomy and views were not available….

…so I didn’t stop to take any.

I did stop for livestock beside the road though.  Lambs are everywhere and all carefully numbered to comply with livestock traceability regulations.

…and the Canonbie cows were conveniently grazing right next to the road. 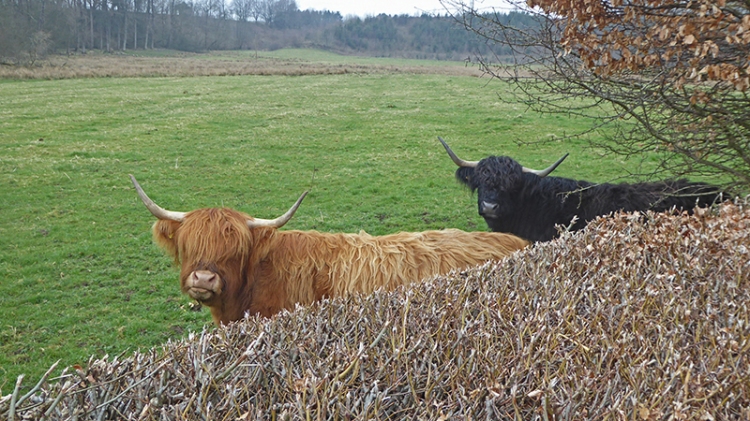 I am surprised that they were able to see me as I passed. 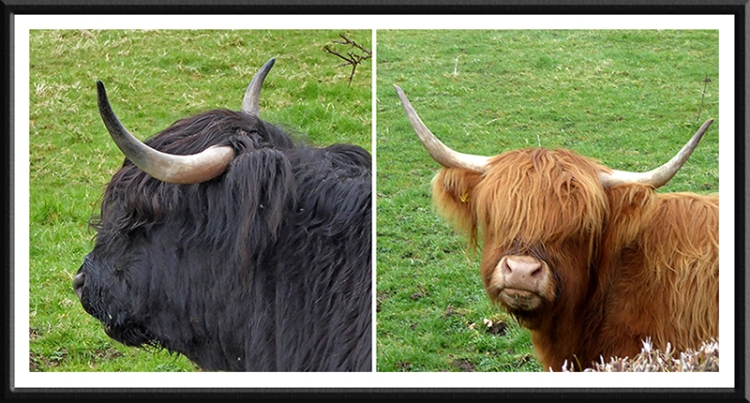 But I was pleased to see them.

I was also pleased to see a very fine crop of willow flowers on a tree at Canonbie Bridge. 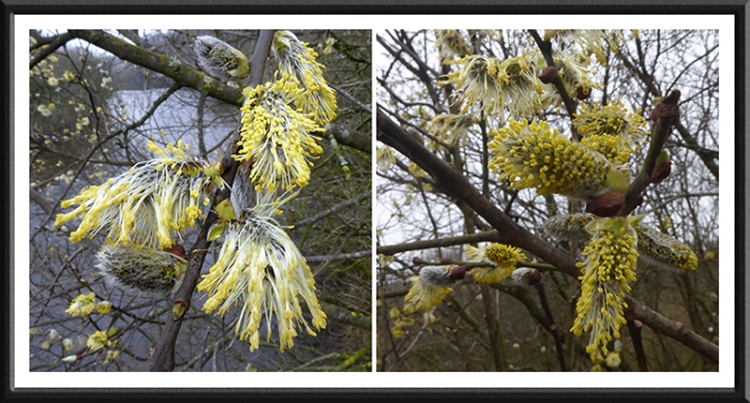 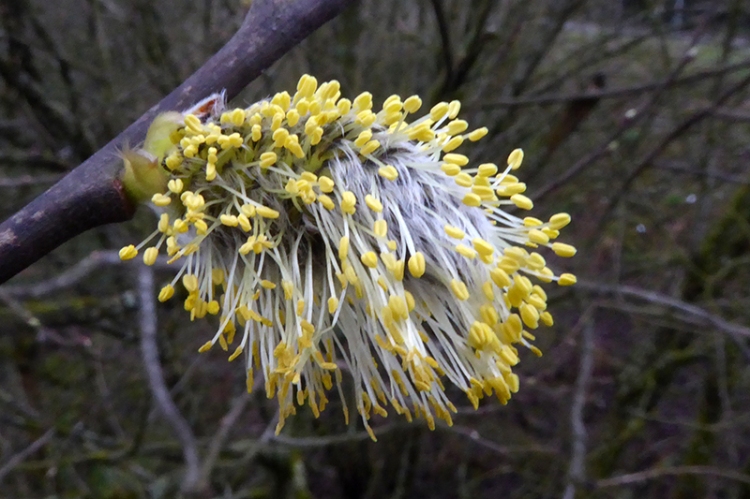 I had parked my bike at the lay-by beyond the bridge and walked back to take the willow pictures.  When I went back to the bike, I noticed that I had parked it by a large patch of butterbur on some rough ground.

In spite of the cold and the gloom, spring is creeping in on us, almost by stealth.

My twenty miles took me over 200 miles for April so far which is very satisfactory after such a slow start to my cycling year but I am still well behind schedule.  Must try harder.

Mrs Tootlepedal was still hard at work in the garden when I got back.  She was improving her new paving area for the garden bench.  She hadn’t been satisfied with the small stepped terrace she had made for before she went down south so today she had lowered the step a bit and now felt happier with it.

Considering that we had intended to have a quiet day today, we had been quite active but that was enough and we went inside for a cup of tea and a rest.

In the evening, Mike and Alison came round and Alison and I had a very satisfactory three quarters of an hour playing music while Mike and Mrs Tootlepedal chatted and drank wine.  Afterwards the conversation was general and I arranged to go on a fern hunt tomorrow, weather permitting, with Mike who is a fern enthusiast.

The flying bird of the day is a redpoll.  It is not a very good picture but it is a change from the usual chaffinches. 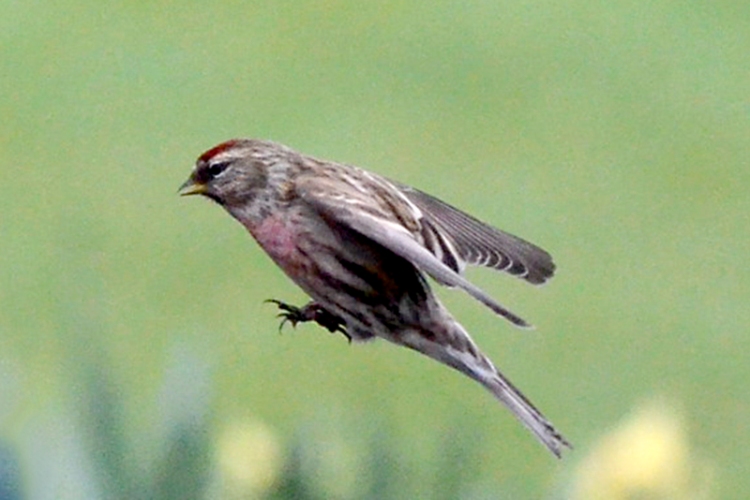 *Definition of OAK:  Old and Knackered.