Today’s guest picture comes from my brother Andrew who stopped on Wetherby on a trip and enjoyed the colonnaded market there.  The street sign says ‘The Shambles’ suggesting it was a place for butchers at one time. 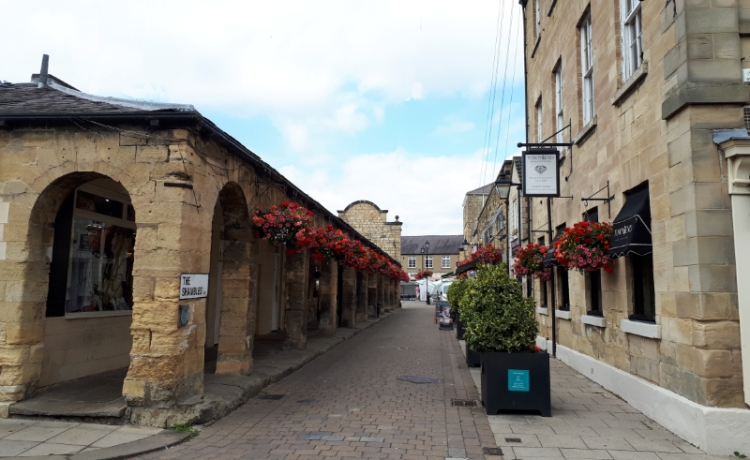 I got up early and went for a cycle ride straight after breakfast, pleasantly surprising myself.

The conditions were good and having been a bit depressed by how slow I have been on recent rides, I stopped trying to blame old age today and just tried harder.  This worked well.  You can almost always cycle faster than you are going at any given time, the only question being how long you can keep it up.

I found it necessary to stop for a wild flower inspection after about 16 miles! 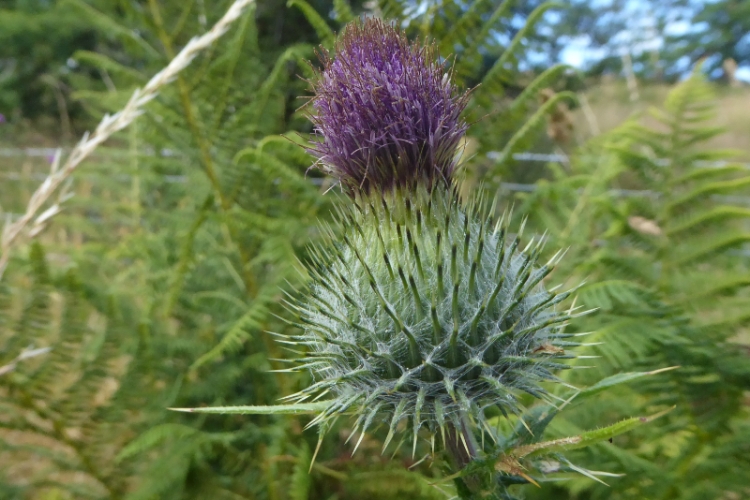 …but there were plenty of docks in fine fettle. 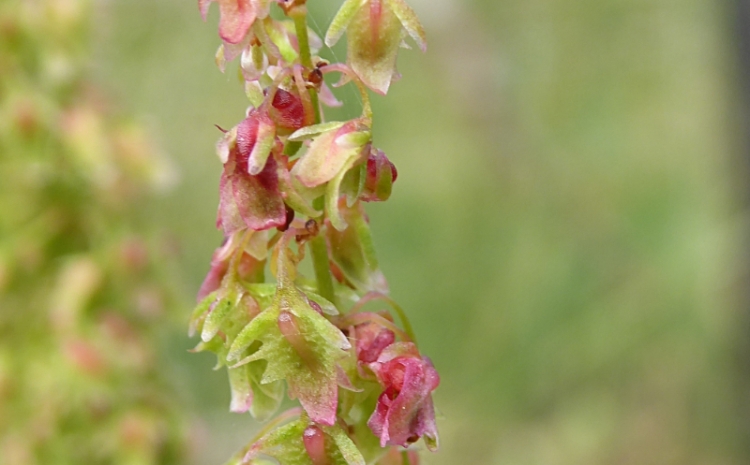 Some umbellifers are already going to seed…. 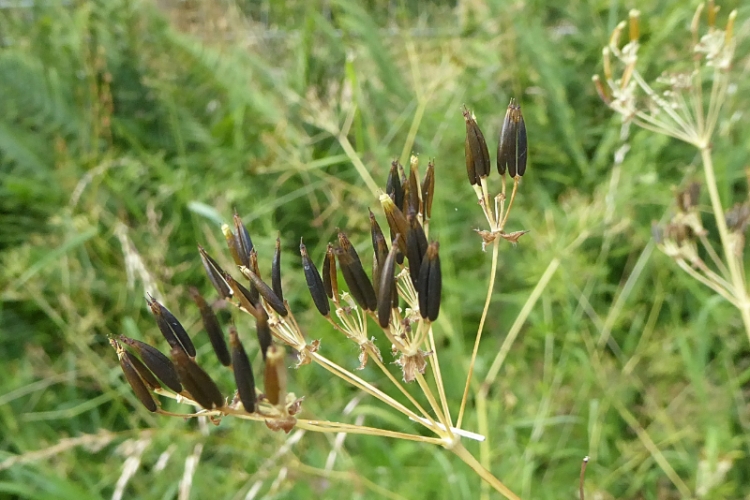 …but once again there were plenty playing host to the ubiquitous red soldier beetles. 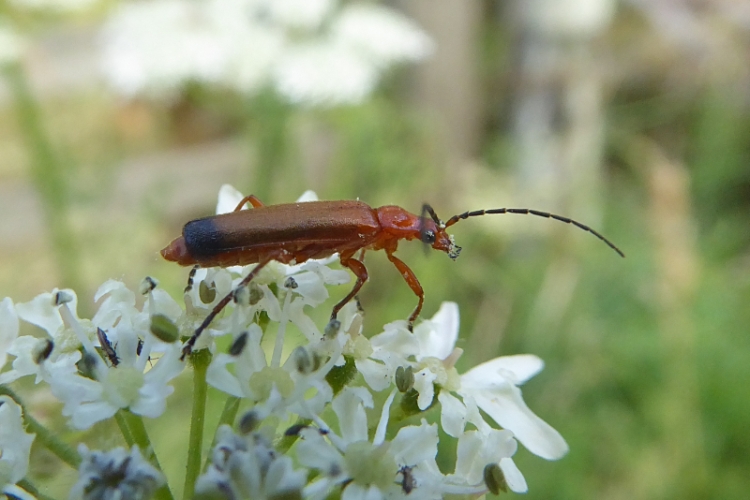 I liked this tree in a neighbouring field which seemed to be having difficulty in deciding whether to grow up or down. 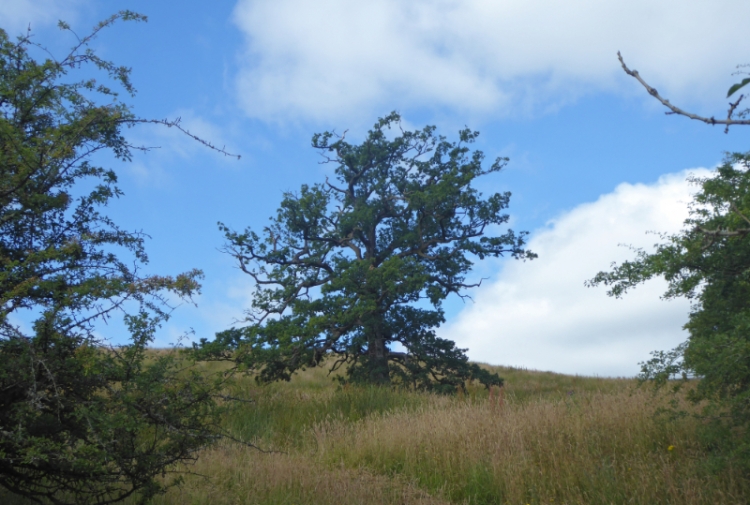 I caught up on a little computer work when I got home but not before I had had a watering wander round the garden. 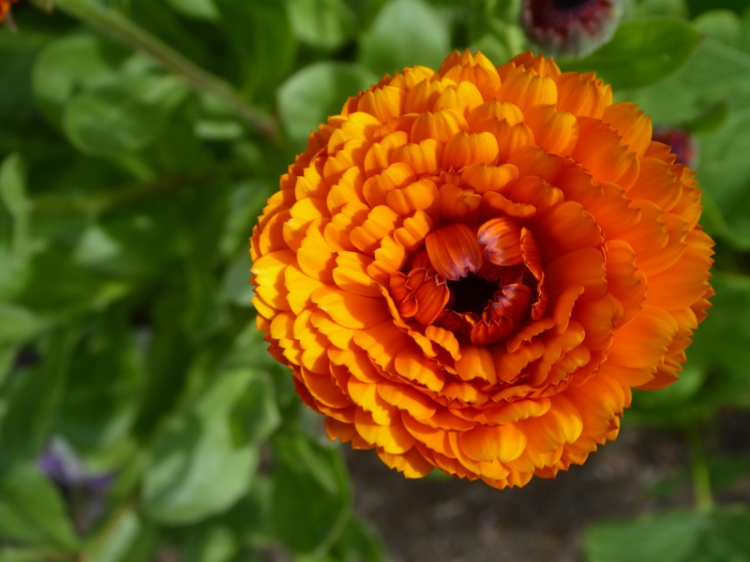 …and the rose mallows. 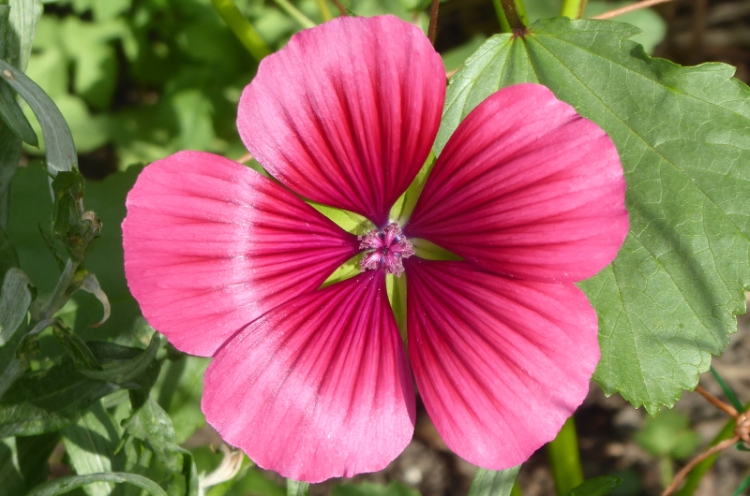 The ligularias are building up a bit each day…. 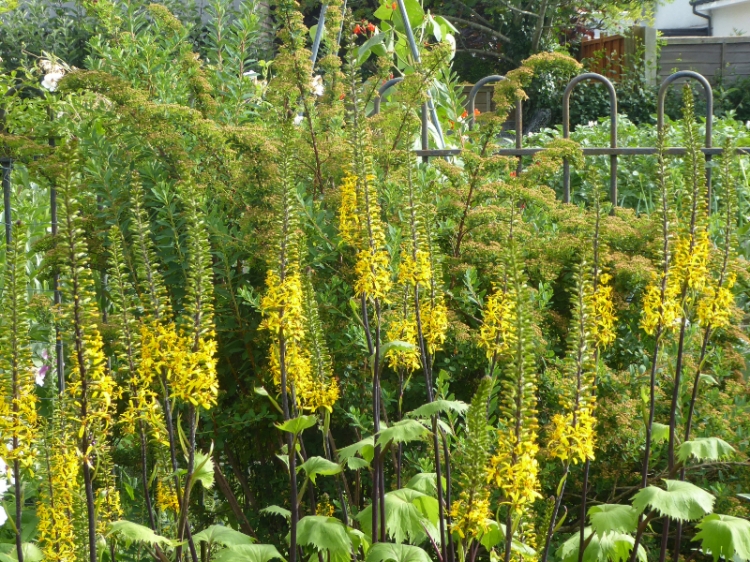 …and the doddering dillies (Sunday name Breza Media or common quaking grass) are doddering all over the place. 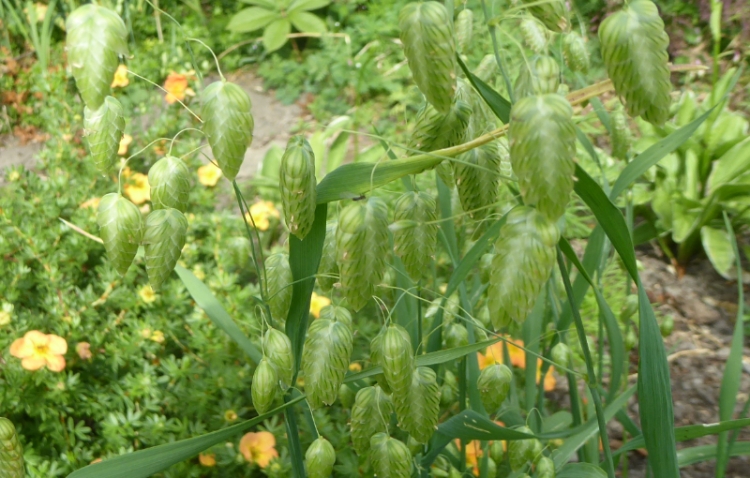 I like this combination of delphinium and phlox beside the front lawn. 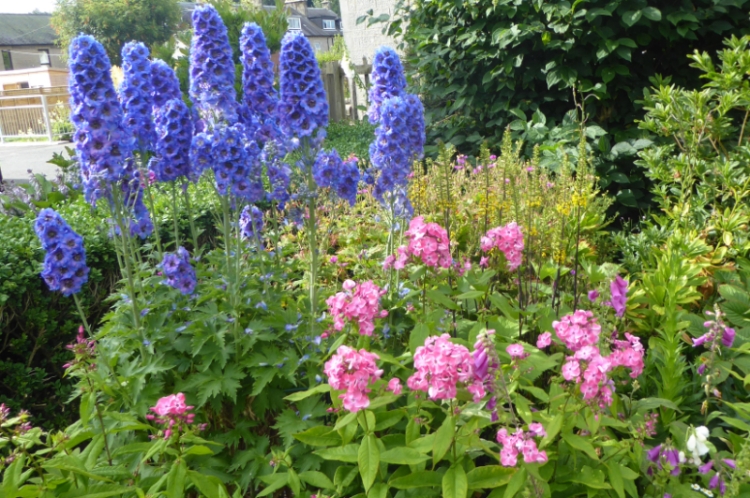 I only shot a few bird pictures…

….as I didn’t have long to hang about before I went off to Lockerbie to catch the train to Edinburgh.  I got there in plenty of time so naturally the train was a quarter of an hour late.

When I got to Matilda’s, I only had a moment to wave at her before her father took me off to visit the site where the family are going to buy a new house.  It is in the process of being built but as it is exactly the same as the show house on the site, I was able to get a good idea of what it will be like.  It looks ideal so I hope that everything goes well with the build and the purchase.

It is only a few hundred yards away from their present house so it wasn’t long before I was back playing with Matilda and then watching a first class dance routine from her followed by the usual excellent evening meal.

After some unpleasantly hot days in Edinburgh, it was much cooler and I walked back to the station keeping my eye out for things of interest on the way.

I passed a queue of runners descending from Salisbury Crags… 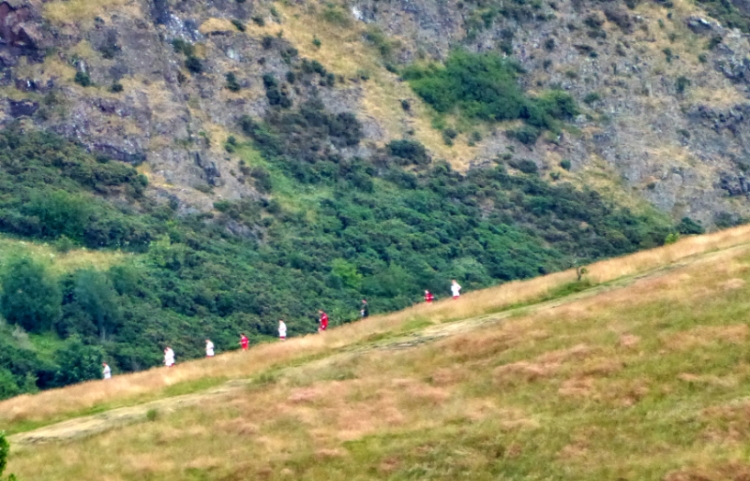 …and a squirrel not descending a tree. 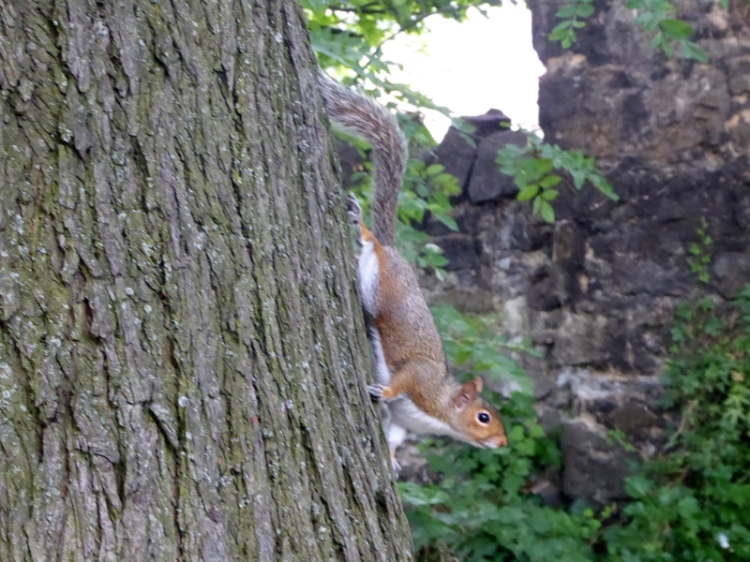 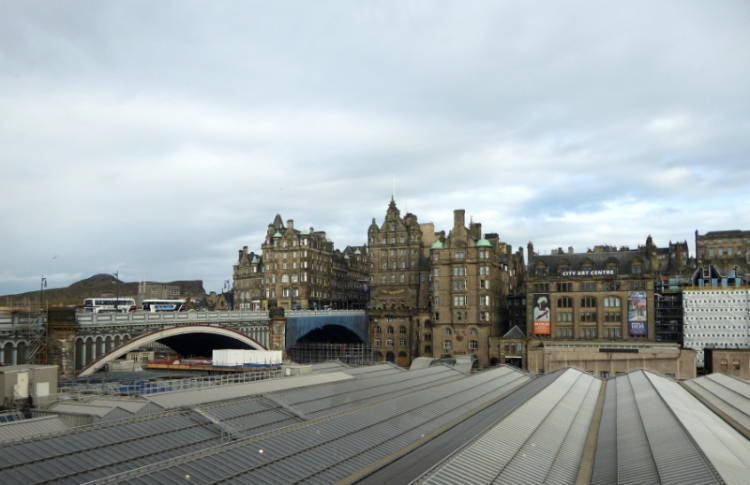 I went down and caught the train home.  It was late too (but not very).

The drive home was illuminated by a sensational sunset which I was rather sad to see.  We had come through some heavy rain at Beattock on the way down in the train and I was hoping that the clouds would stretch all the way to Langholm.  They didn’t.  More watering tomorrow.

The best I could do in the way of a flying bird, since most of my intended subjects today either hid… 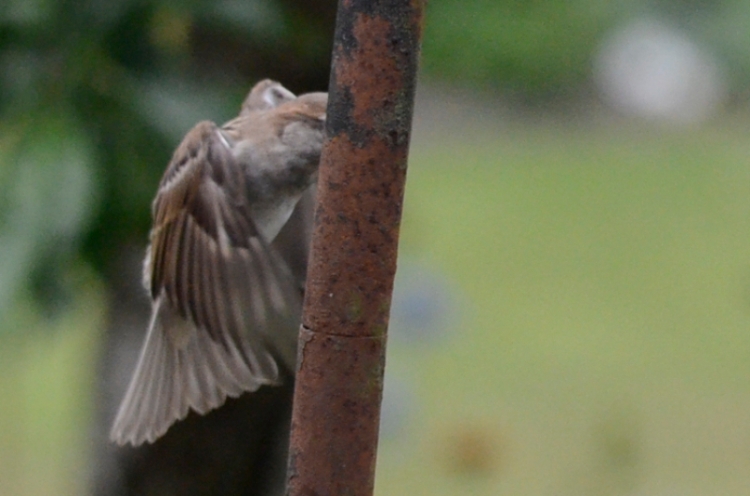 …or flew off before I could catch them, was this rather curious two headed, four footed sparrow. 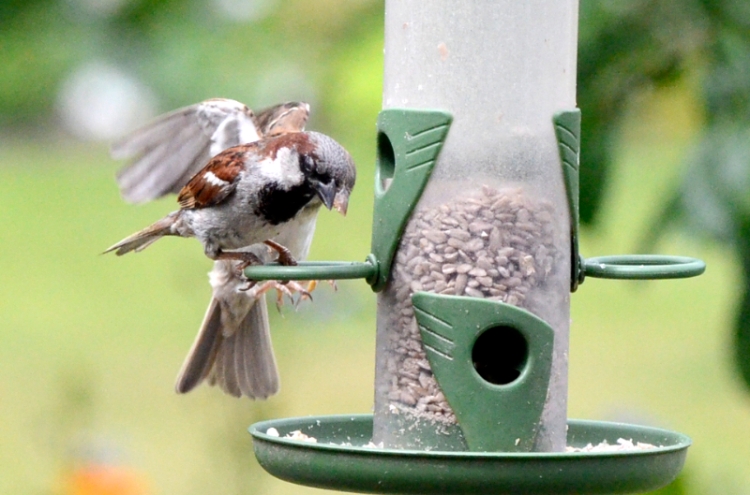 22 thoughts on “Two modes of travel”