Today’s guest picture comes from my eldest sister Susan, an inveterate traveller, who has just come back from Italy.  She saw this handsome church door in Ortesi in the Dolomites.

Like King Lear, I was going to do such things today but also like the King, I didn’t know what they were so in the end, I didn’t do them.  Instead, I took a leaf out of Brer Terrapin’s book and did a lot of lounging about and suffering.

The lounging was serious but the suffering was very slight and was greatly alleviated by the arrival of Dropscone for coffee bearing the traditional Friday treacle scones.

I had done some watering and weeding before he arrived and I did some more afterwards and as always looked at the flowers as I went along.

The first sweet peas are out… 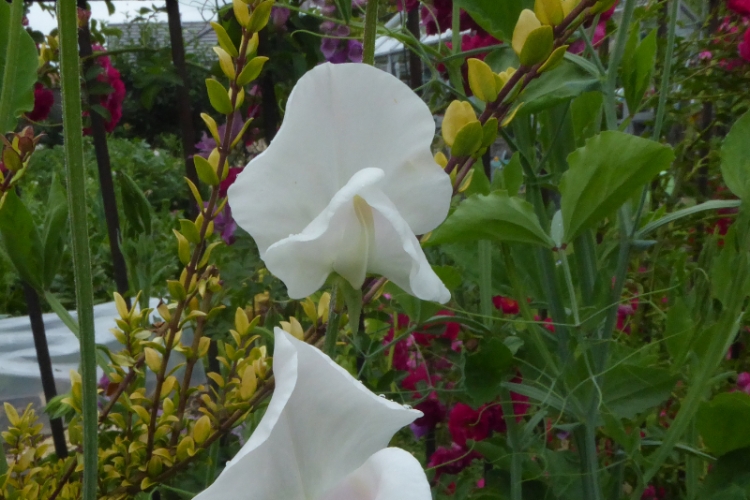 …and ever more lilies appear each day.

Mrs Tootlepedal planted two new roses this year and I saw that one was looking rather dry and droopy a day or two ago so I have watered it carefully and it was looking much more cheerful today.

The Queen of Denmark has responded to some water too. 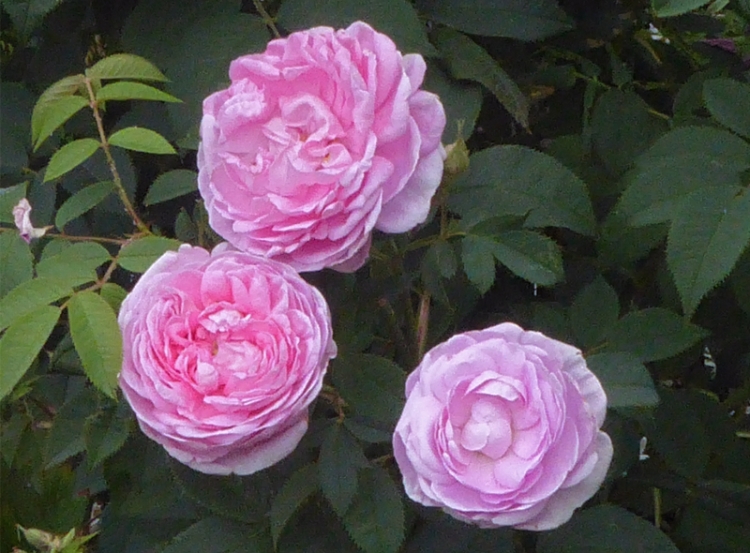 And the Common Riding rose is just sensational without any water at all.

The camera simply can’t do its luxuriant growth justice at all.

While I was having coffee with Dropscone, the phone rang and a mystery voice asked if I was Tom.  I admitted to this and the voice said my wife was having trouble with her mobile phone and since I was the account  holder, he wanted to ask me a few security questions.   This was so obviously a scam that I put the phone down without saying any more.

A moment or two later, Mrs Tootlepedal rang up to say it wasn’t a scam and she was having trouble with her phone and I was the account holder for it.  I checked for a reputable number for the phone company, rang it, got a really helpful human on the line with minimum delay, talked the problem through and solved it within minutes.   The shock of getting a sensible and prompt  corporate response was so great that I had to have a sit down to recover.

Then  I watched birds for a bit.

A greenfinch arrived to take advantage of the sunflower seeds.

Greenfinches are a lot bigger than siskins but don’t always get their own way.

On the ground below the feeder, a blackbird with an elegant grey feather was finding its own food.

I had lunch and thought of a walk or a bike ride but actually did some more lounging instead and had to suffer by sitting through much of a Tour de France stage and two simultaneously  never ending tennis matches from Wimbledon.

Mrs Tootlepedal rang up to say that although her phone was working, now she was having trouble reading her emails on her tablet although she was properly connected to her brother’s internet router.  This was a puzzle.

I popped out from time to time to do more watering and weeding and dead heading too.

The melancholy thistle is looking more  cheerful every day…

..and looming over it, is the prettiest sunflower that I have ever seen.

In the vegetable garden Mrs Tootlepedal has planted many small sunflowers and they are blooming freely with a great heap of honeysuckle on the fence behind them. 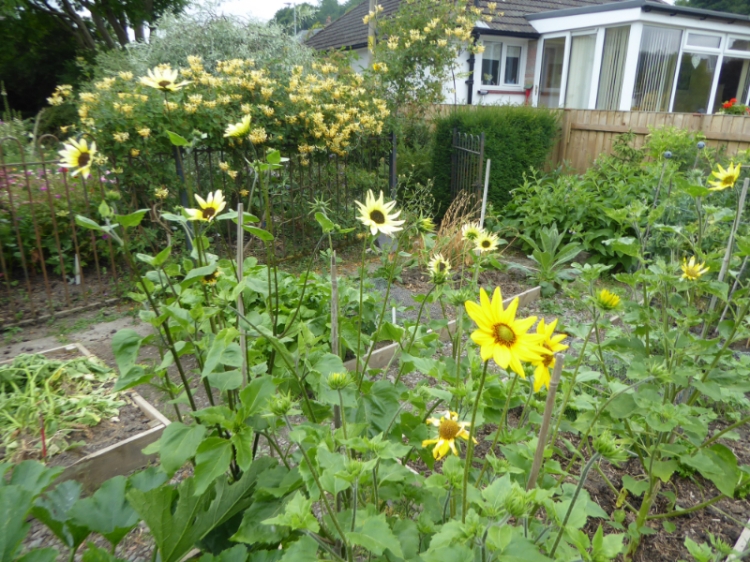 Also in the veg garden, the French marigolds are thriving and time will tell whether they have helped to keep the carrot root flies of the carrots.  I thinned out a test carrot the other day and it looked straight, clean and promising…

…but it was rather small still.

A new potentilla has come out.

In the course of time, I dug up another potato, picked lettuce, peas, beans and gooseberries and a large turnip for my evening meal.

The turnip was so large that I cut it in two and gave half to Mike and Alison when they came round in the evening for their customary Friday night visit.  Alison and I enjoyed some good playing of sonatas by old English masters while Mike, in the absence of Mrs Tootlepedal to talk to, watched the tennis.

I had further talk with Mrs Tootlepedal on the matter of her internet connection and suggested that although she was connected to the router, maybe the router was not connected to the internet.  This turned out to be the case and the problem was solved by the time honoured method of turning the router off and then on again.  I wish all problems were as simply solved as Mrs Tootlepedal’s technical glitches were today.

The flying bird of the day is a sparrow.

30 thoughts on “Lounging around”