Today’s guest picture is another from my Newcastle correspondent Fiona’s trip to Amsterdam.  She was taken by this structure which combines art with lost and found.  If you find something, hang it here and if you have lost something, search for it here.

The scientific rain gauge wasn’t called into action overnight and the day remained dry and warm.  All that was missing was sunshine.  Still, at 19°C almost from the start, it was an ideal day for lawn mowing and I mowed both lawns before Dropscone appeared (with scones) for coffee.

The butterflies made an early appearance too.

And the bees were on hand as well.

Dropscone had been to two golf competitions and had a family holiday in Islay since I had last seen him so there was plenty to talk about as we sipped and sconed.

When Dropscone went about his business, I mowed the greenhouse grass and the drying green as well to complete the full set of mowing for the day…

…and then I looked about.

I couldn’t fail to notice the dahlia of the day…

…but it took a closer look to spot not one but two hoverflies enjoying another dahlia nearby. 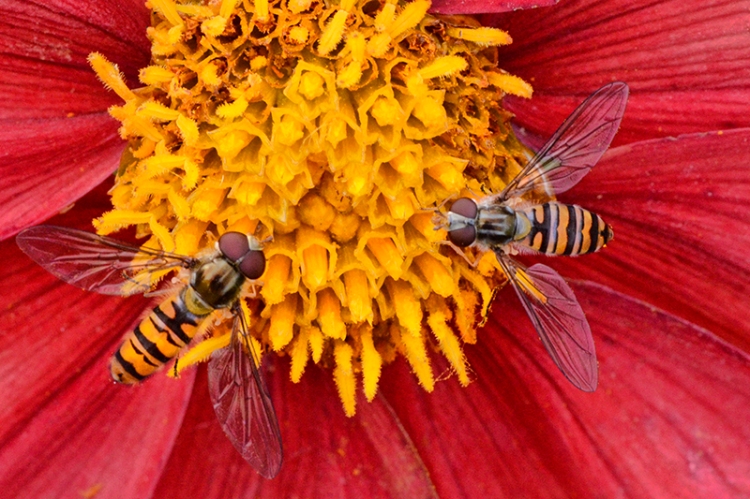 I had a nourishing sardine sandwich for my lunch and put up the bird watching camera.

Mrs Tootlepedal reckons that we must have about forty to fifty sparrows in the garden at the moment.  She regards this as an invasion of vegetable destroyers and I regard it as a photo opportunity. 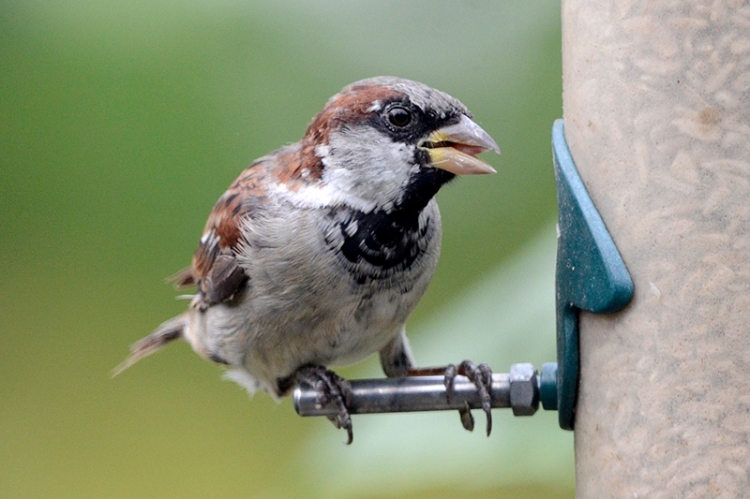 I try not to neglect the chaffinches which visit us all year round.

And I was pleased to see that the blue tits have become regular visitors over recent days.

After lunch, I got ready to go for a modest cycle ride.

Mrs Tootlepedal was hard at work in the garden so before I went, I had a walk round.  I showed her a red admiral butterfly in the buddleia… 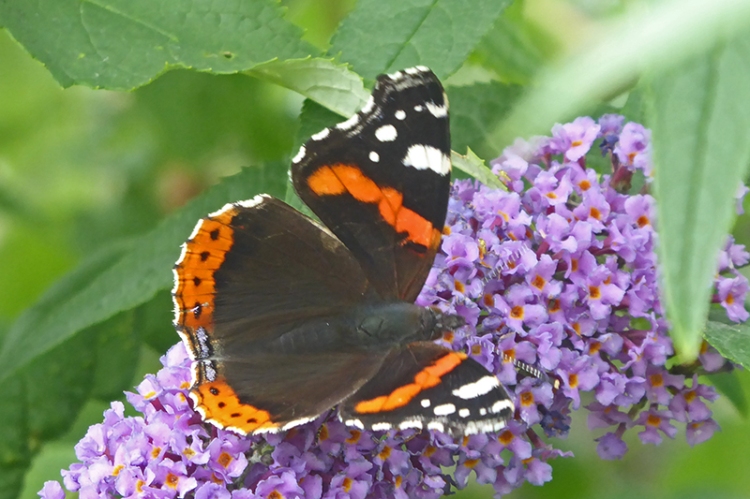 …and when she had gone back to work, I noticed a less glamorous winged creature on the Michaelmas daisies. 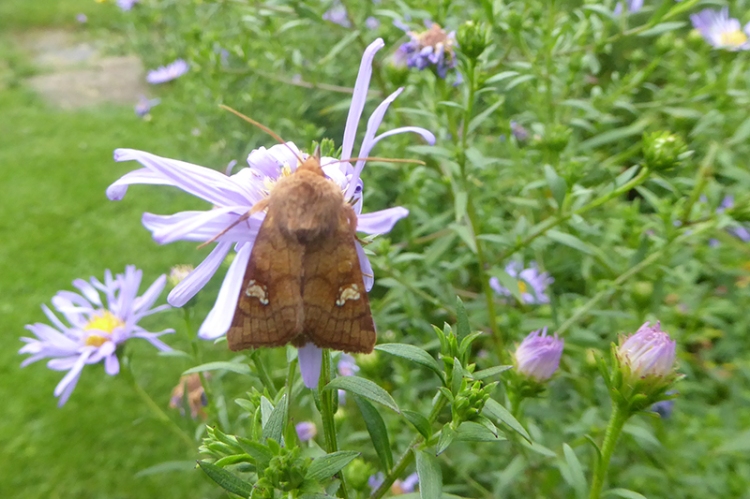 Less glamorous but utterly charming when met face to face. 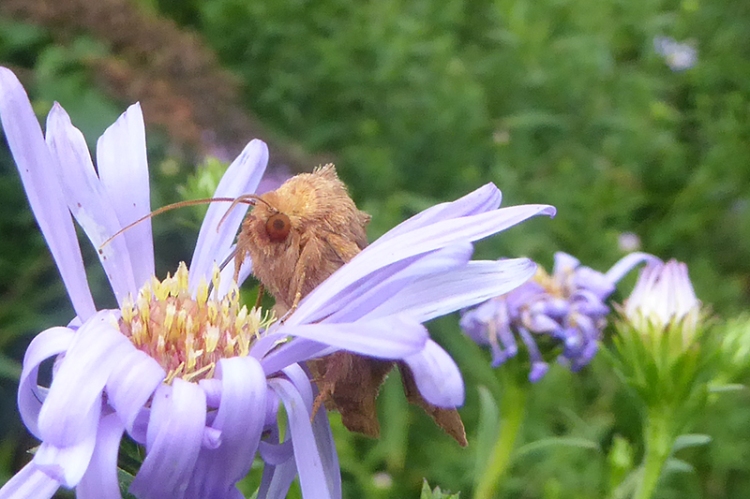 Research tells me that this little charmer may be a brown line bright eye moth.  As always, I am happy to be corrected.

Reluctantly abandoning any further bug hunting, I set off for my pedal.

The two great perils for cyclists at this time of year are hawthorn hedge cutting and the habit of the council of dressing the roads with loose gravel before the winter.  The theory is that passing cars flatten the gravel and then the council sends round a sweeper to clear off the surplus.  Until the cars and the council have dome their jobs,  the loose gravel is both hard work and  dangerous for cyclists so it is best to avoid it.  I had been warned of one section so I carefully chose a different route only to find that part this route had been gravelled too.

This led to to or three miles of very slow and careful cycling and this, combined with a light but very unhelpful wind and extremely uncooperative legs which were not interested in trying hard, led to a a very stately pace for the 31 miles.

The grey weather didn’t lend itself to views so I stopped for this mildly pastoral scene, with added pylon…

…and an inhabitant of a field full of goats. 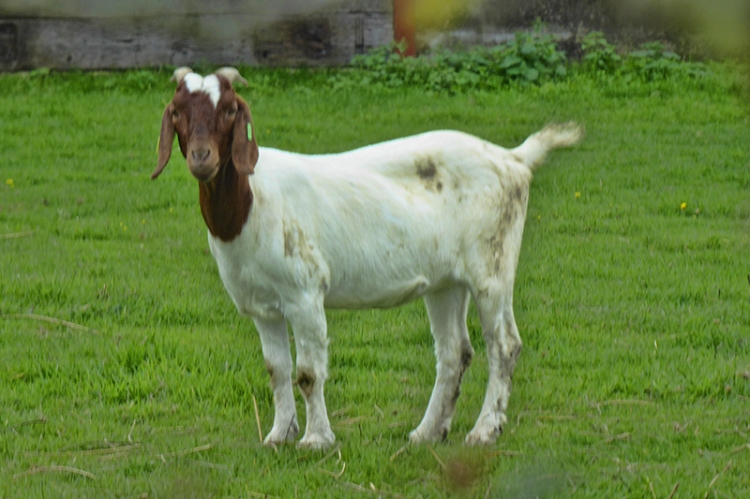 I was alerted to the goats by some noisy bleating behind a hedge.  I have passed this field before on many occasions and never heard the bleating so I wonder if the goats are newcomers to the area.  There were a lot of them in the field.

My back was a bit sore at times so I paused to rest my bike on this handsome wall topped with variegated holly.

The moss on the wall is growing back after the drought and further on, I saw some promising brambles and a little green fly.

So, although slow, the ride was not entirely without interest. 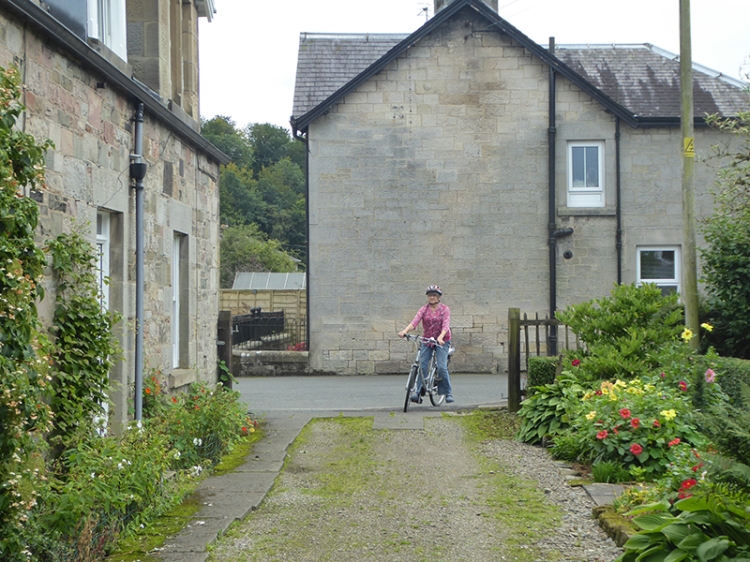 …and then Mike Tinker joined us for a cup of tea in the garden in the pleasant warmth of the late afternoon.

My flute pupil Luke turned up as usual on a Monday and we worked on concentration while playing with some  heartening results.

After the wet and windy spell, the last two days have been good for cycling and I am now ahead of my schedule for the year, though not by as much as I would like so I hope to get out for at least another couple of rides before the end of the month.

The flying bird of the day is one of the sparrow army. 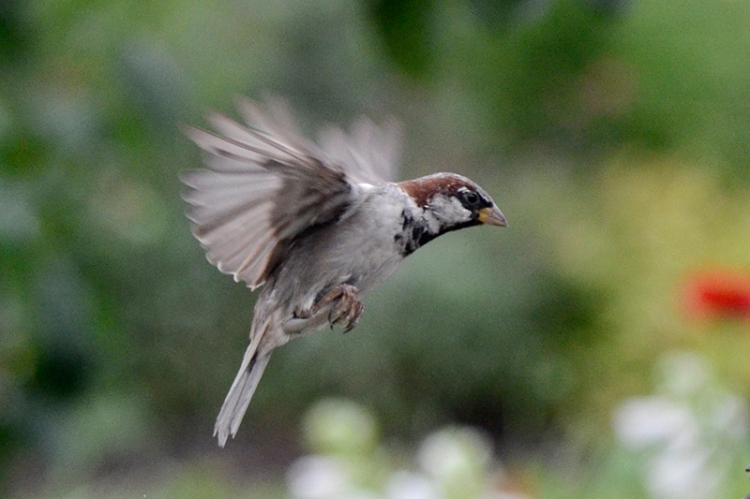