Today’s just picture comes from Mrs Tootlepedal’s brother, Mike.  He planted some daffodils to brighten the road verge opposite his house and is pleased that his work has born fruit.  Being 300 miles south of Langholm, his daffodils are already out. 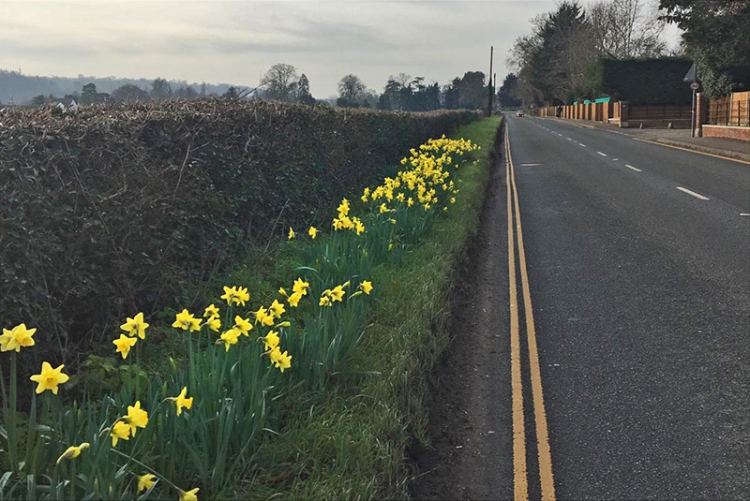 Mrs Tootlepedal went off to Carlisle after an early breakfast to help sort out the music library for  our Carlisle choir.  This is a big job with 130 copies of every piece of music we sing needing to be sorted and stored.

While she was gone I looked out into the garden on another grey day.

The feeder was busy… 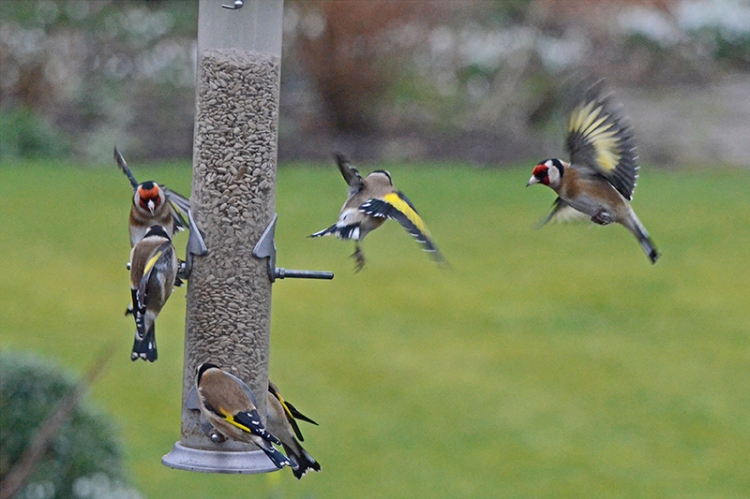 …and on the mossy lawn, a pigeon was putting its best foot forward.

I had put out some fat balls and they had attracted jackdaws. 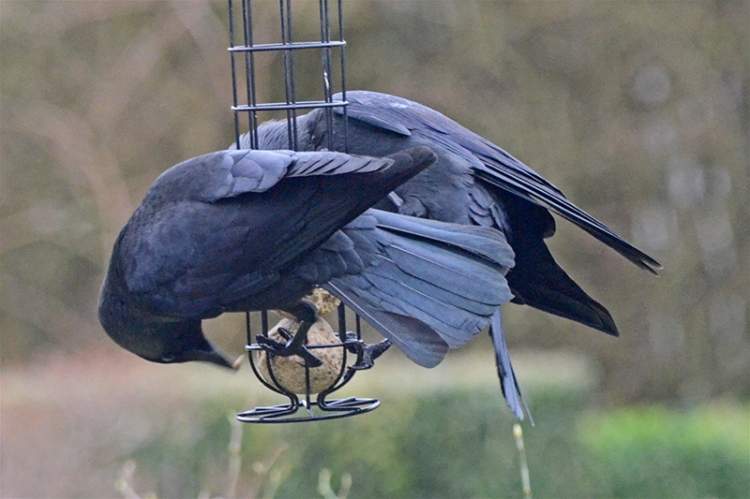 There was no shortage of flying birds to be seen even if there was a bit of a shortage of light to see them by.

Sandy came round for coffee.  He was in an exceptionally good mood because he had just enjoyed a thoroughly good night’s sleep, a thing so rare as to be be priced above pearls.

While we sipped and chatted, we were joined by some greenfinches… 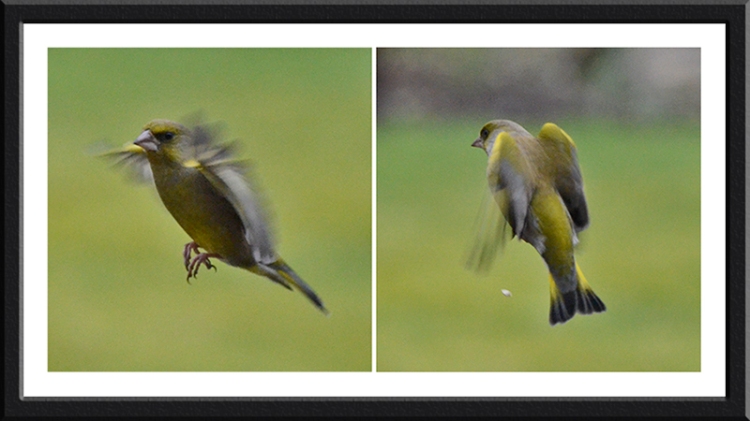 …and a very unusually marked jackdaw.  I have never seen one like this before.

After coffee, we went up to visit the Moorland project feeders in the glade at the Laverock hide as it was Sandy’s day to act as feeder filler.  After filling the feeders, we lurked in the hide for a while.  There were plenty of birds about, mostly chaffinches but with a good number of great and blue tits too. 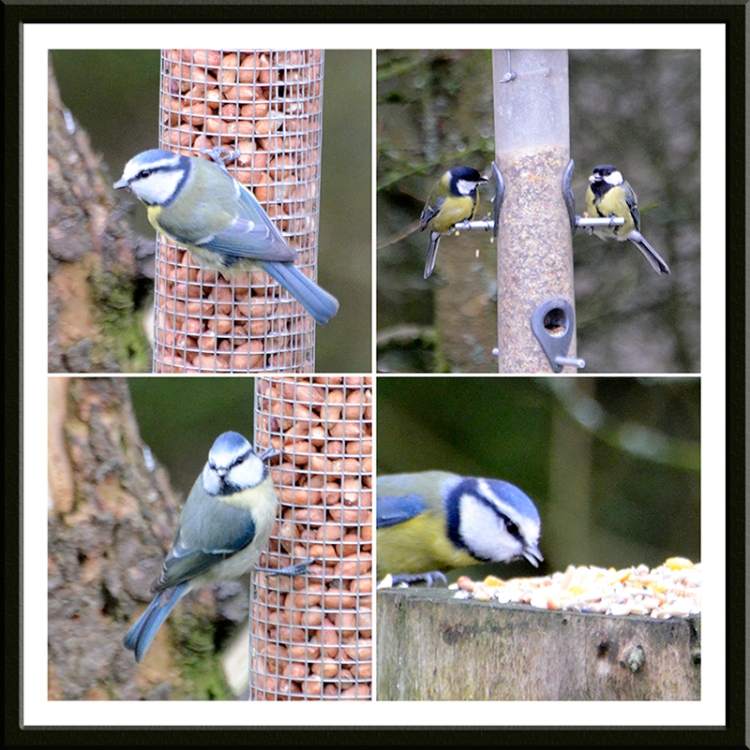 As with my garden, there were no winter visitors to be seen at all.  This is a bit worrying as there seems to be no reason not see our usual migrants.  I hope it is a one off and  not a sign of things to come.

We didn’t stay too long and when Sandy stopped at the Co-op on our way back to buy a local paper (full of articles by Dropscone this week), I took the opportunity to get out too and walk home along the river in the hope of seeing something interesting.

The hope was amply fulfilled as I saw a goosander… 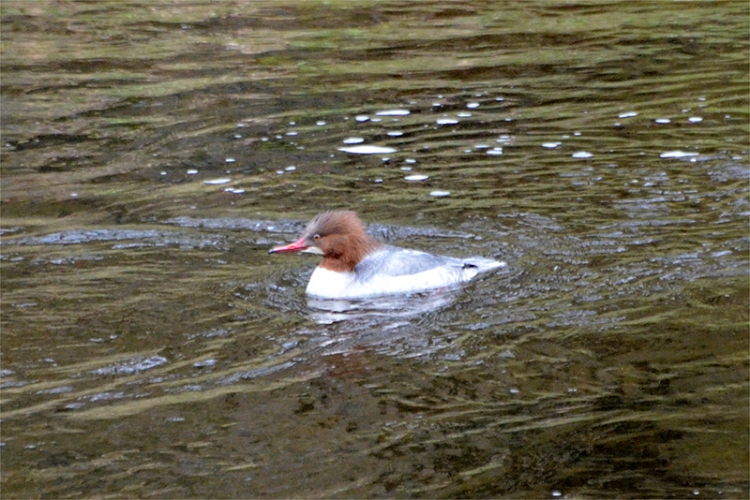 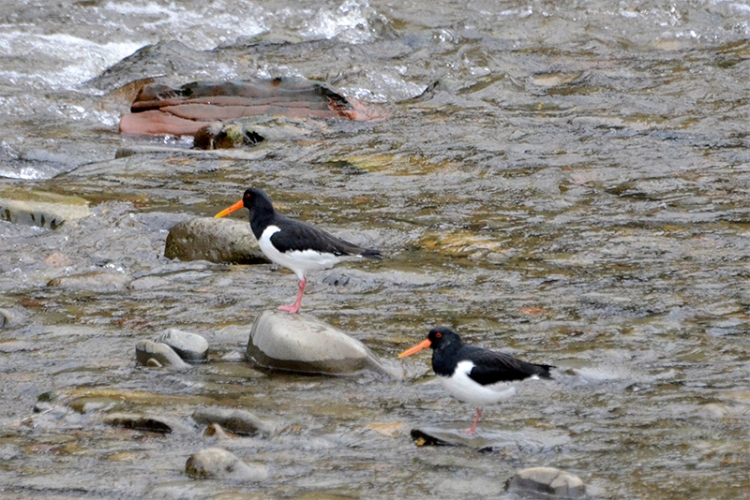 …and a single white duck.

It was still pretty grey and most of the birds were a bit too far away from the bank for good pictures but it was encouraging to see them.  I snapped the church too while I was passing… 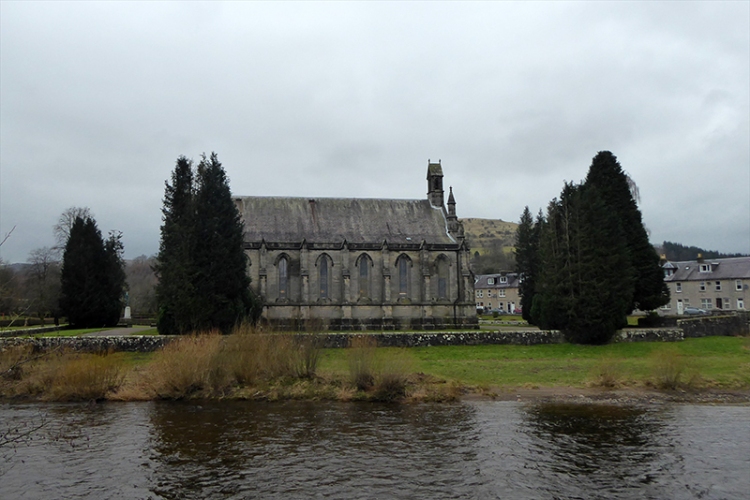 …and a bit of typical Langholm street life.  Dog walking is a popular activity in our town.

When I got home, I made some soup and then dashed out into the garden when the sun came out.

I didn’t have time to enjoy the sunshine and go for a walk or a pedal though as I had to go off to drive to Lockerbie to catch the train to Edinburgh.

It was a day of sophisticated travel arrangements as Matilda and her family were flying back from a family party in Dublin over lunch and Mrs Tootlepedal planned to catch the train from Carlisle that I was aiming to catch 20 minutes later in Lockerbie.  It is on days like this that the mobile phone really comes into is own and the flight and train journey went smoothly as planned and we all met in Edinburgh on schedule.

Matilda then took Mrs Tootlepedal and me for a walk in the woods.  We scaled the heights…

…and came out at the top of a small hill from which we could see Edinburgh Castle in the distance  over the roofs. 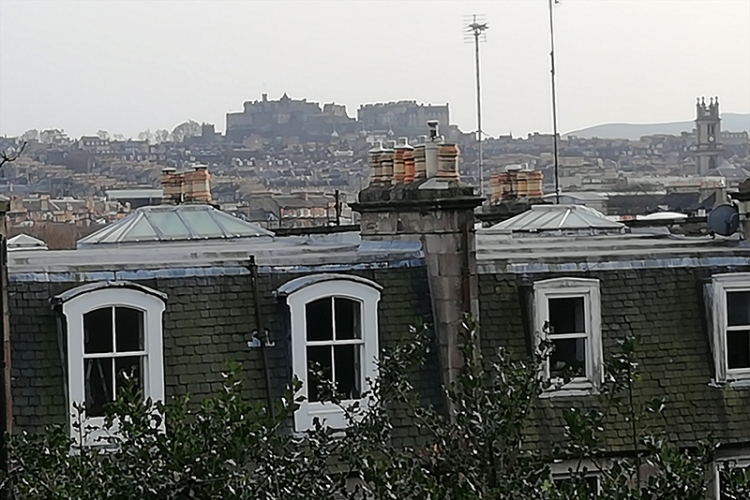 The rest of the afternoon was spent in catching up on news of the trip to Ireland, being coached by Matilda in the proper use of the alphabet, watching clips from Matilda’s dancing school’s annual show on DVD and eating another tasty meal.

We got safely back to Lockerbie on the train and drove home as the temperature dropped back to freezing again.

It is supposed to be warm and sunny tomorrow after a chilly start.  I live in hope.

The flying bird of the day is one of the oyster catchers making off down river. 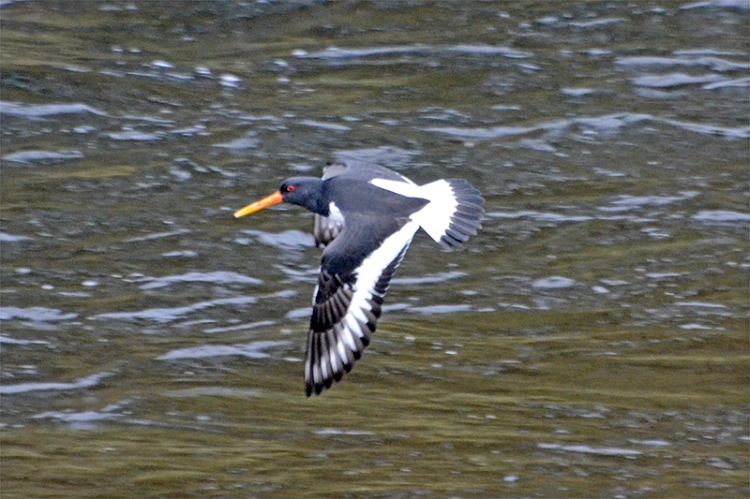 21 thoughts on “Into the woods again”