I would like to thank kind readers for sending me a positive flood of potential guest pictures and I have chosen one from Venetia’s African odyssey to start off.  It shows a gemsbok which appealed to me as it appeared in a recent crossword as an answer to a cryptic clue.  It is good to see what one actually looks like.

We were slightly worried about the weather at the start of the day as Mrs Tootlepedal was due to go to London on family business and the the forecasts regarding Storm Gareth were quite alarming.  As it turned out, we avoided the worst of the overnight weather and things looked like this in Langholm this morning.

In the event, both bus and train ran to time and Mrs Tootlepedal is safely ensconced in the south as I write this.  Doubtless she is relaxing under a palm tree and enjoying a beaker of the  blushful Hippocrene  with beaded bubbles winking at the brim.  I believe this is the standard practice down there.

After Mrs Tootlepedal left to catch the bus, I went to the dentist on my bike and discovered that I am going to have to have two small fillings.  As I am grateful to still have some teeth to fill, I shall not complain.

On my way home I passed a goosander checking to see what was under the surface. 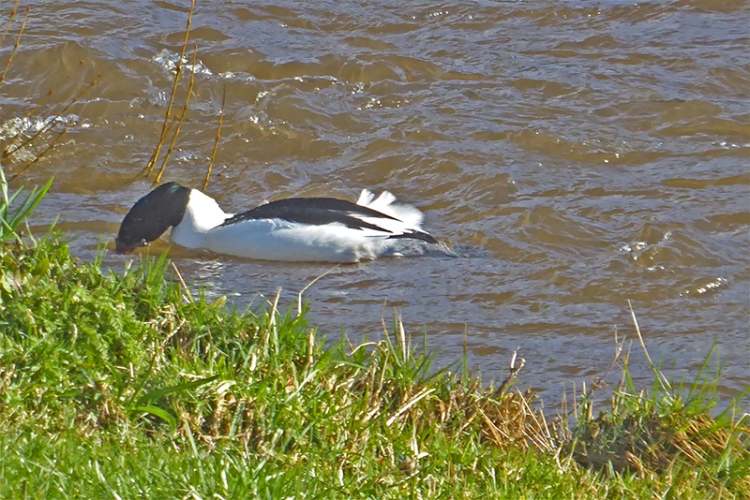 It stayed pretty sunny all morning and I was a bit sad that a sore foot kept me housebound, although the strong and chilly wind would have kept me off my bike anyway.

I looked out of the window at the daffodils which have come to join the hellebore under the feeder.

Up above, the was plenty of action.

I made some multicoloured lentil soup for my lunch and I felt strong enough to have a wander round the garden.

The first scillas are in flower…

…and a couple of frogs had arrived in the pond.

I was just settling down for a rather boring afternoon when providentially Sandy arrived bringing our shared mount cutter which I will need to prepare pictures for our forthcoming camera club exhibition.  We had a cup of tea and a dainty biscuit and then when I expressed a wish for a short outing in the car to at least get out out of the house, Sandy suggested a trip up the hill to see if we could see a wild goat or two.

The sun had gone in and there was a hint of drizzle but the call of the wild was strong.

We actually saw three goats but when we stopped and got out of the car, they scurried over a bridge (no doubt going ‘trip trap’) and made off up the hill.

This was the bridge that they crossed. 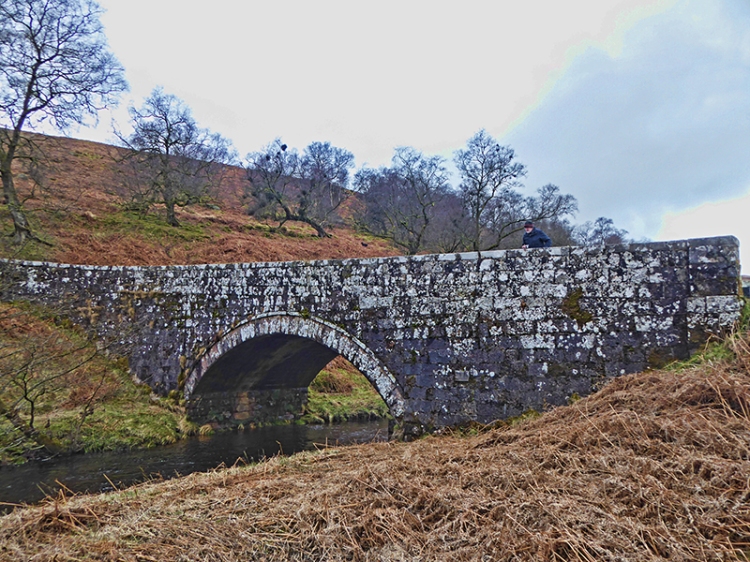 It has Sandy on top of it and no trolls underneath.

Slightly disappointed with this small sighting, we continued up the road towards the county boundary, seeing no goats as we went along.

Deprived of goats we looked at the Black Grain Burn instead.  It winds its way down the hill beside the road…

It has a multitude of little cascades of….

…sizes.  I took two shots of the middle sized one because I liked the spangled curtain of peaty water.

This was the biggest. 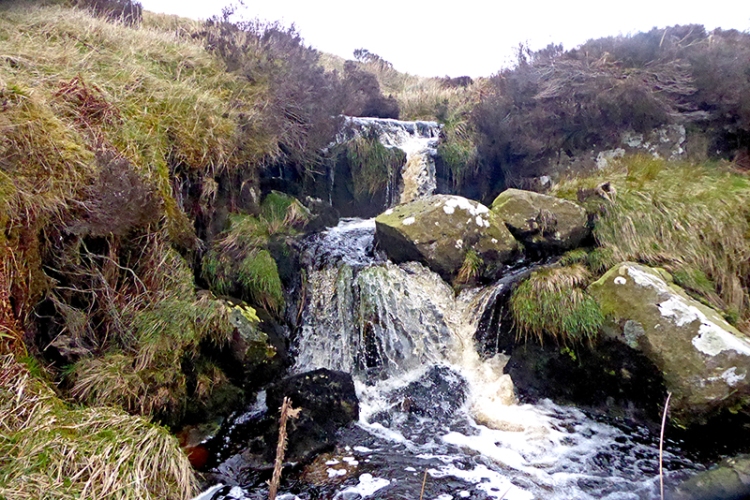 It is a little gem of a place and we intend to come back later in the year when things are greener, the sun is out and a picnic might be in order.

It is a magical spot and I wouldn’t be surprised to find that it has a bank where the wild thyme grows.

We drove on to the county boundary and saw nothing of interest in the wild life category…well to be truthful, we saw no wildlife at all.

We didn’t stop long as the chilly wind was fairly whistling past us.

We were peacefully driving back down the hill when we were brought to a sudden stop by spotting a good number of goats just by the road.  We must have passed them without seeing them on our way up.

The Langholm Moor feral goats are a fine sight with immensely shaggy coats and notable horns. 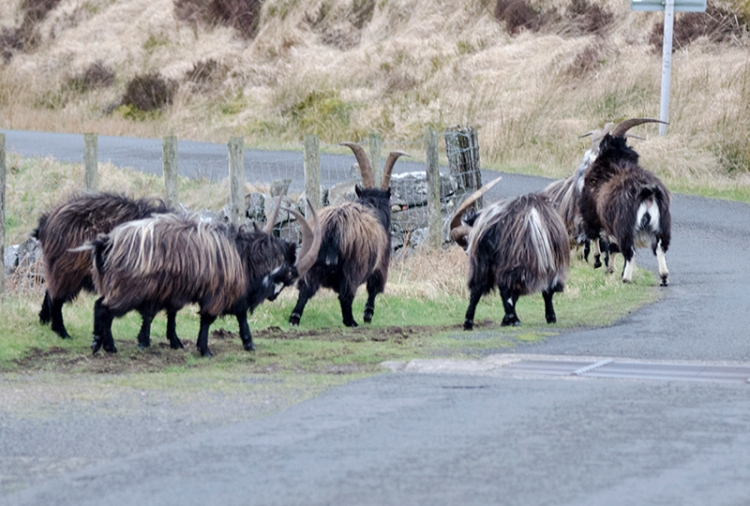 …but not without a bit of headbutting and prancing on the way. 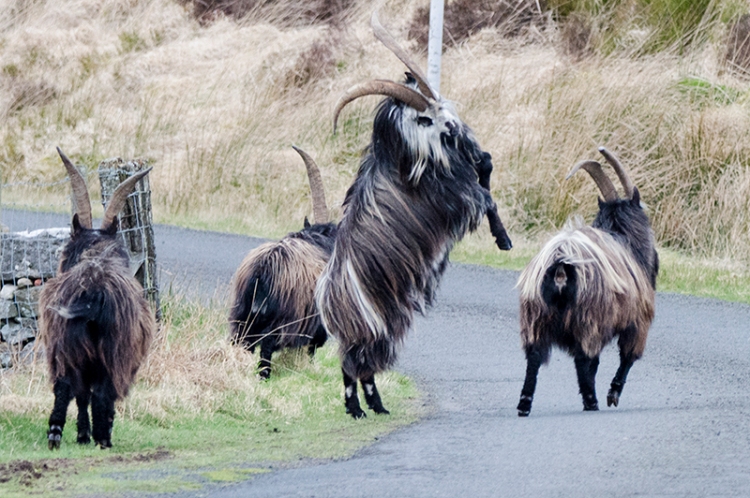 They stopped soon after and let us take some more pictures.

We took the opportunity gratefully.

The light was fading so we drove on with one last stop to let me take a quick snap from the car of the first lambs that I have seen this year. 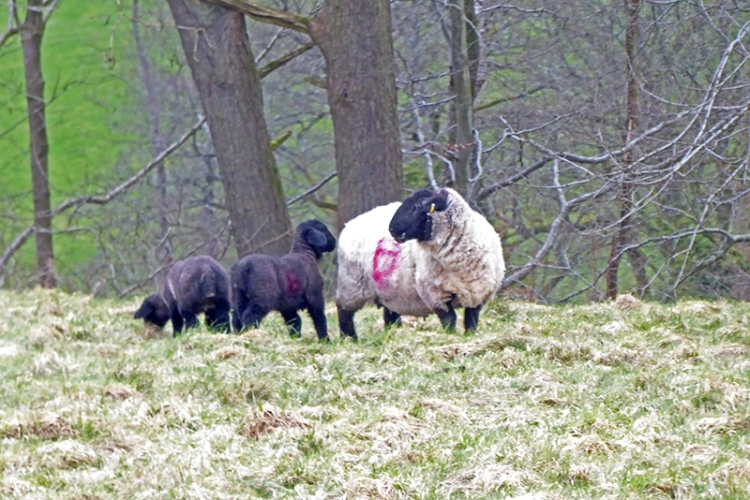 It was an excellent outing and I was grateful for Sandy for giving me an excuse to get out of the house.

I made an enormous bowl of cauliflower cheese for my tea and surprised myself by eating it all.  I had to let out a notch in my belt afterwards.

In the middle of more parliamentary mayhem in the evening, I listened to a conservative MP talking soberly and sensibly while outlining a perfectly sensible cross party plan of action which as he said would satisfy most of the 52% leave voters without insulting the 48% remain voters.  He was so sane and reasonable that I fear that he has no future in politics.

The flying bird of the day is a chaffinch giving the world a sideways look in the morning sun. 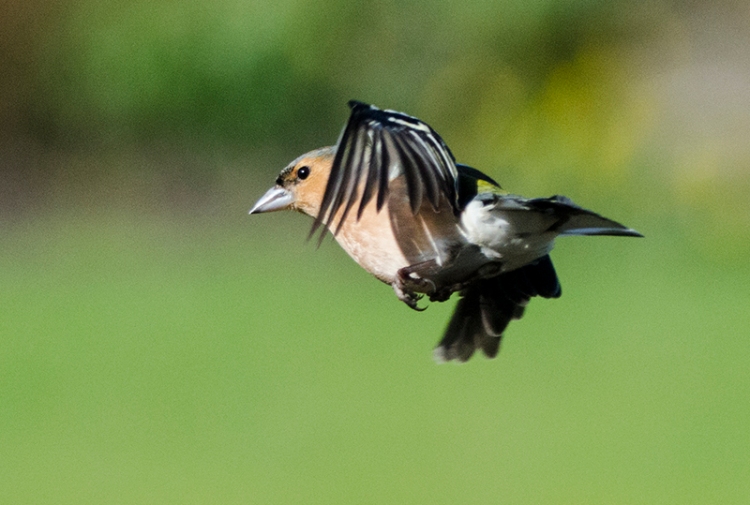 38 thoughts on “Getting my goat”