Today’s guest picture is another of my brother’s Derby insects.  He suspects that the face of this grasshopper might have been modelled on our prime minister after recent events. 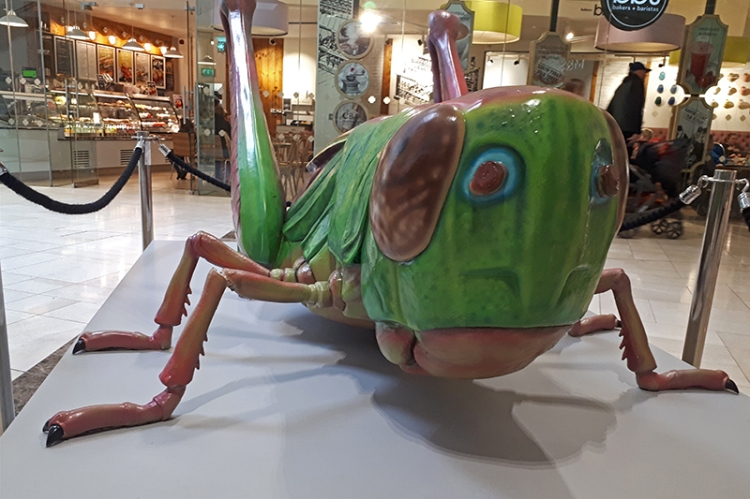 We finally got a reasonably calm and occasionally sunny morning today and as it was a good day for gardening, it was almost inevitable that Mrs Tootlepedal should have had an all day embroidering workshop arranged.  To add to her misfortune, by the time that she returned home after the workshop, she began to feel a bit poorly and had to retire to bed and thus the whole day was wasted from a gardening point of view.

I was luckier and able to make the most of it as far as my unhelpful foot allowed.  Although it was quite chilly at a mere 5°C at 10 o’clock, I managed to get my cycling kit on and tested my foot by cycling 14 miles on my new bike.  I took a few pictures to celebrate being out and about as I went along.

As it is getting late as I write this, I append them with the general comment that I enjoyed the views. 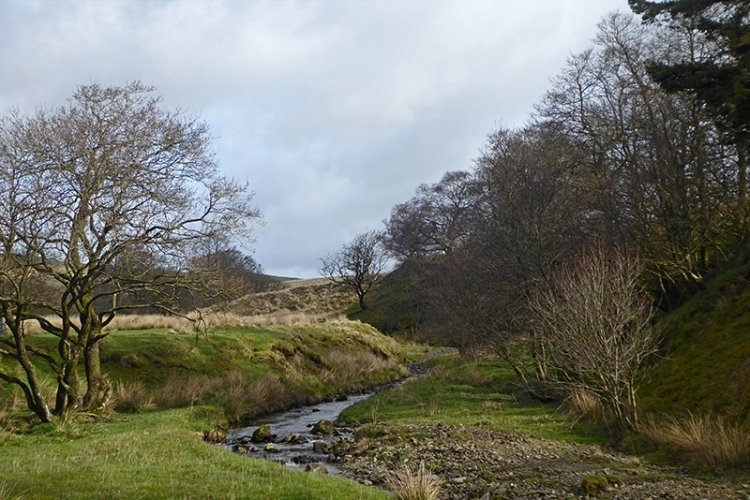 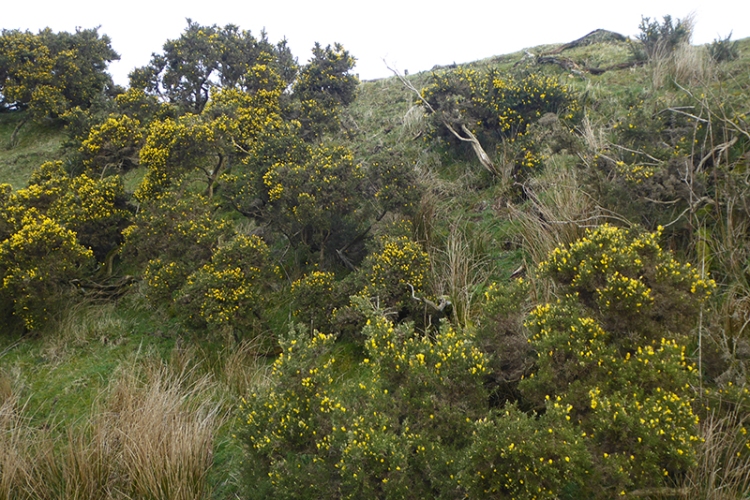 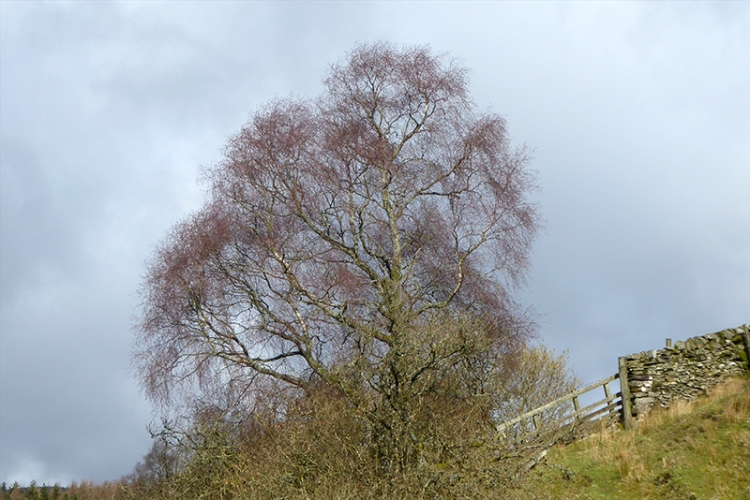 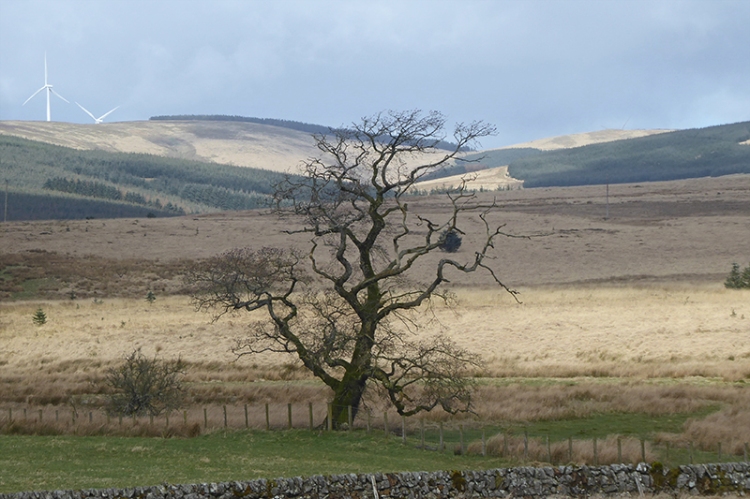 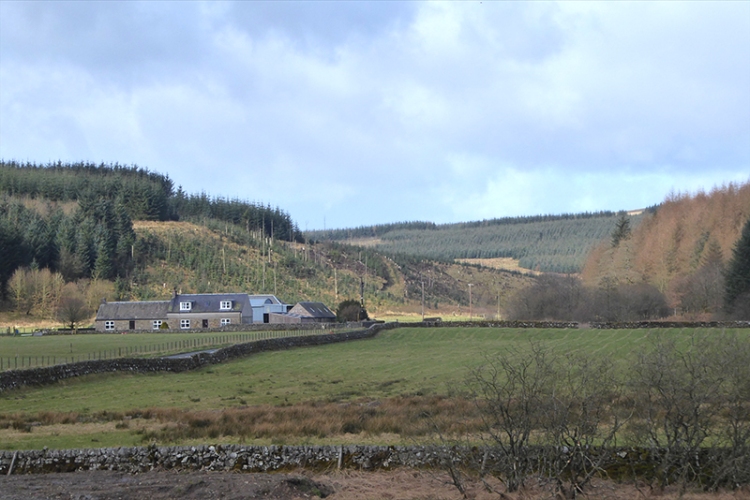 The cycling was pretty painless but I could feel my foot complaining if I had to go up any sort of a hill, so I kept to a low gear and took my time.

Just before I got home, I passed my neighbour Liz, who also has a troublesome foot.  She was walking her dog and I as I thought that we both might benefit from a cup of coffee, I invited her to drop in when she had got home.

I had time to get changed and make the coffee (and tidy the kitchen table) before she arrived.  The coffee was consumed to a background of really interesting foot conversation.   When Liz left, I had a quick scout round the garden and noticed that more of the fancy cowslip flowers had appeared… 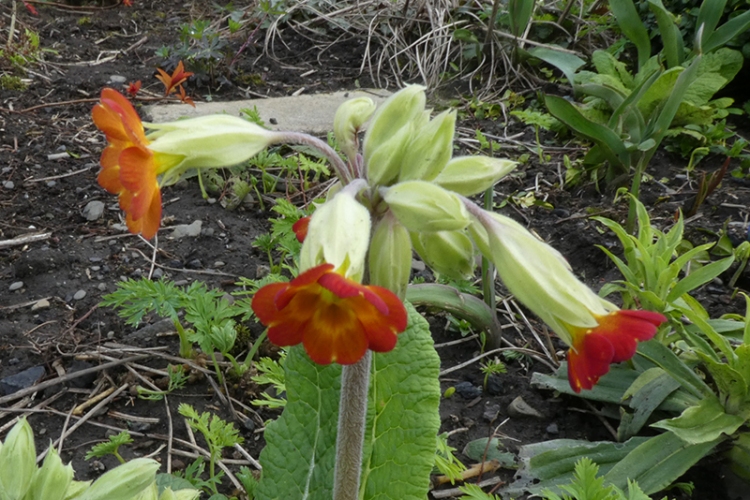 …and the magnolia bud is developing but not flowering yet. 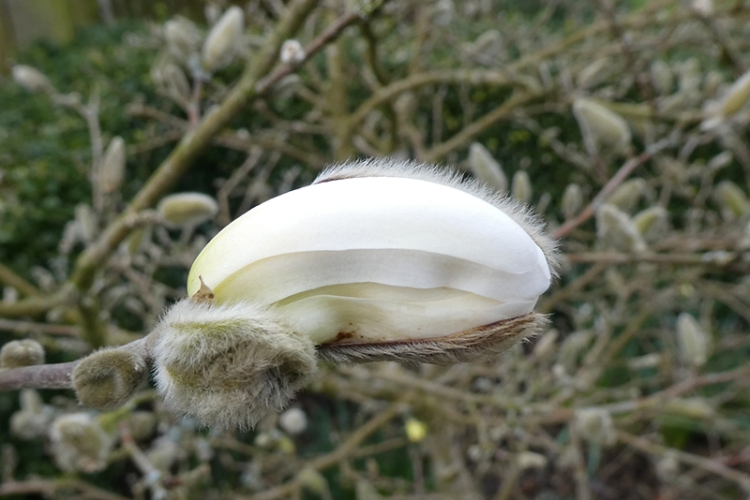 I went back in to prepare some soup for my lunch and watched the birds while it was cooking.

There were a lot of siskins about again. 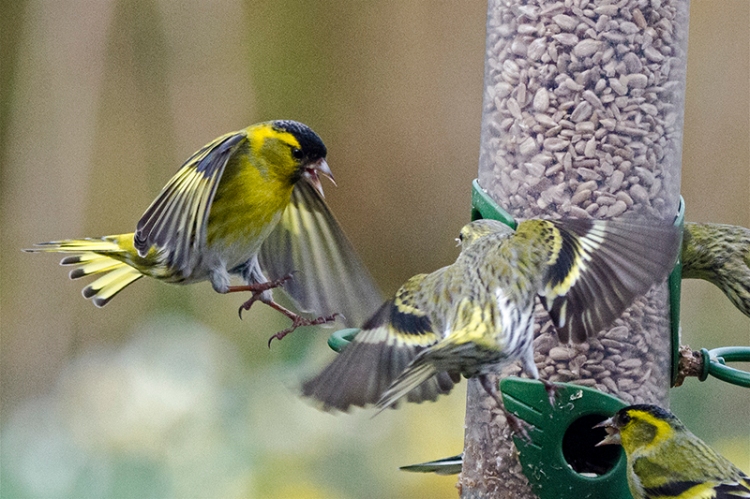 I liked this chaffinch checking out the feeder spaces. 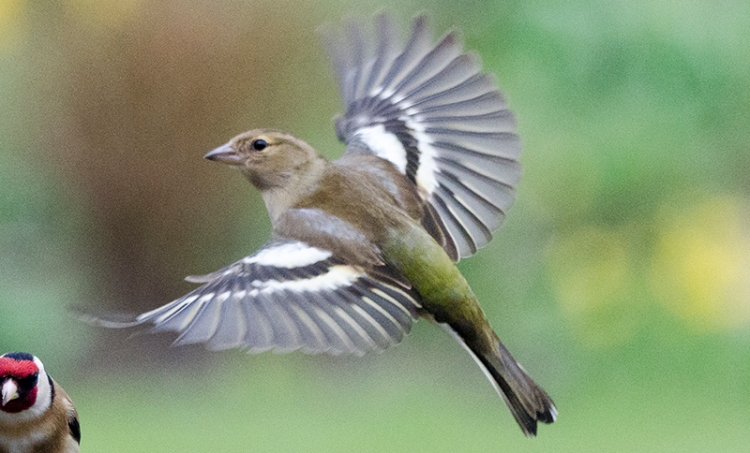 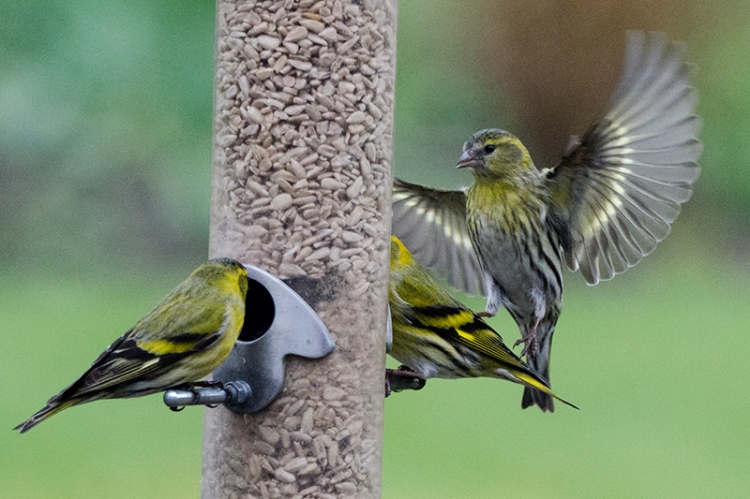 …while some chaffinches may suffer from bad breath it appears. 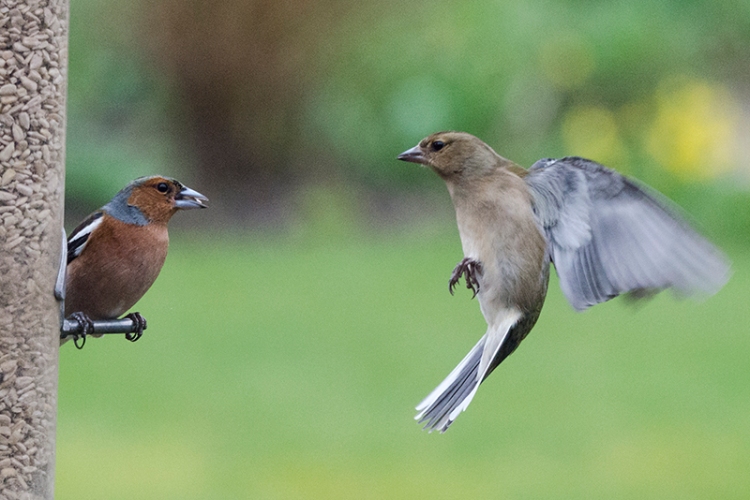 A goldfinch kept an eye on proceedings in an avuncular way, maybe auditioning for a role as a wise old owl. 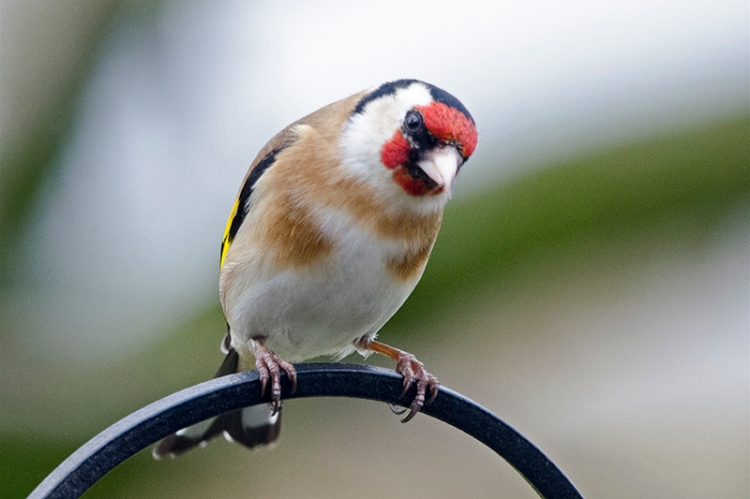 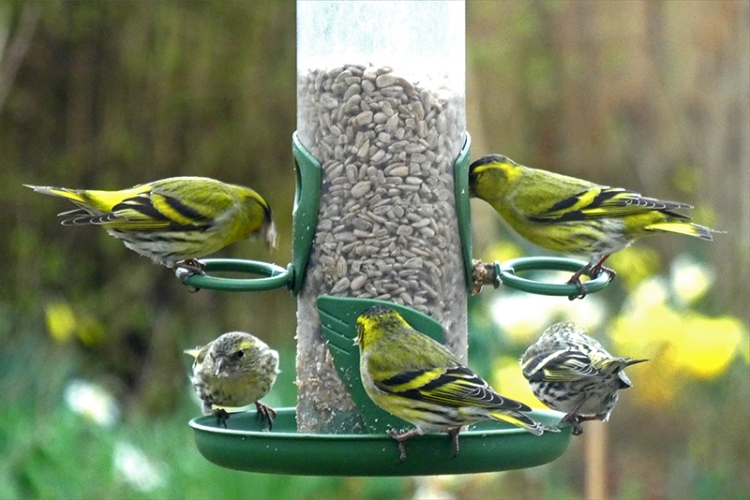 As my foot was a bit too sore for a walk but had not got much worse after my short morning cycle, I went for a flat ride on my slow bike after lunch, with plenty of stops to watch the oyster catchers on the Esk… 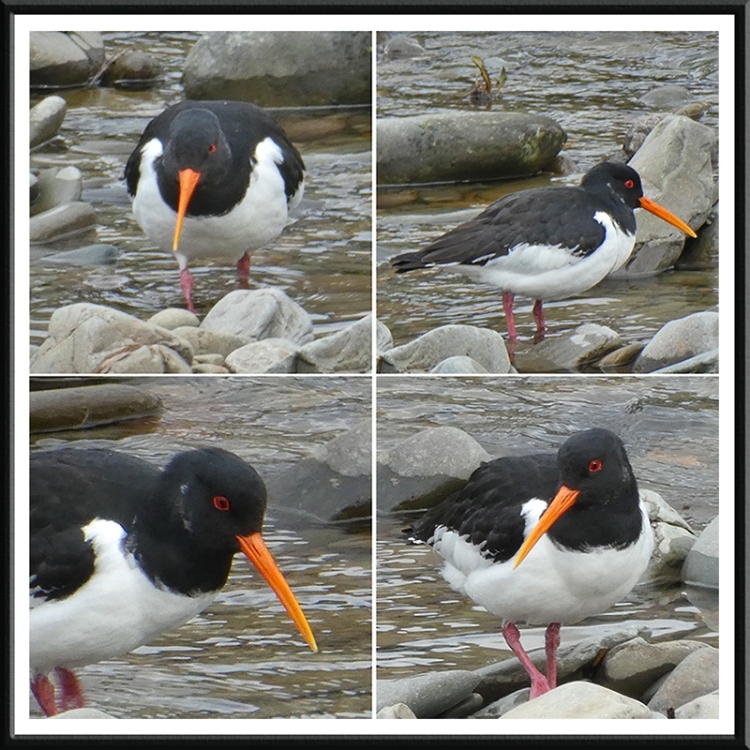 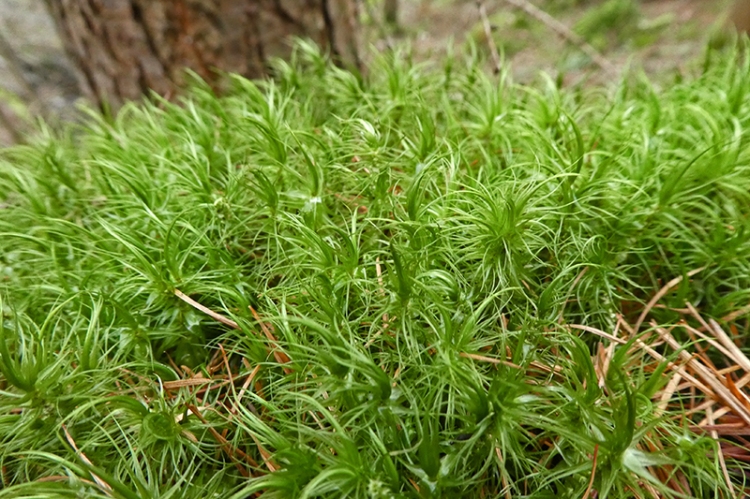 …and a little glade. 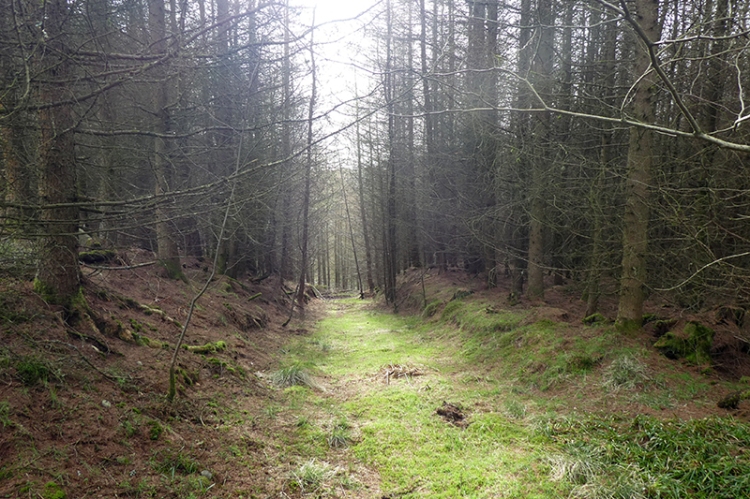 The larches are just about to come out and it will soon feel much more like spring.

I cycled back through the town, passing this sensational shrub opposite the Townfoot tollbar… 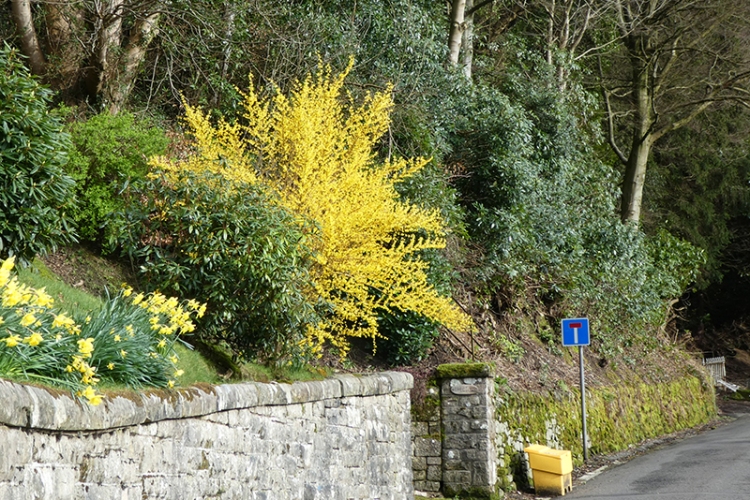 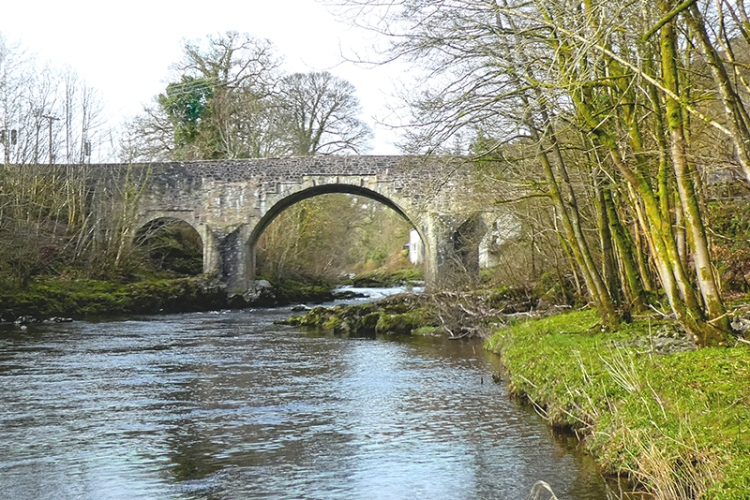 ..fighting my way past some recently fallen branches to get to the waterside… 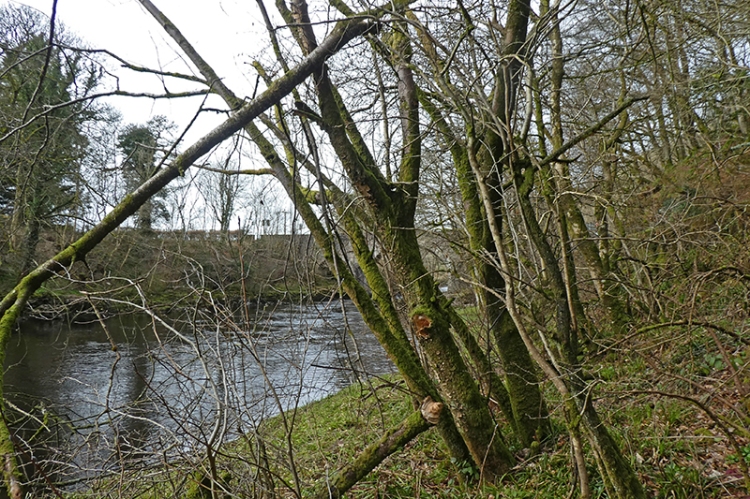 …and then went further along the road until I got to the mossy wall. 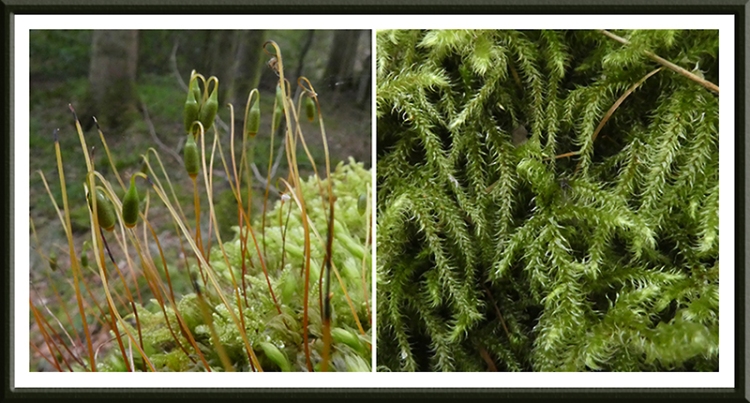 Then I pedalled back home, stopping at the Co-op to purchase some fish cakes for my tea.

All in all, it was a very satisfactory five miles, though it has to be admitted that my foot was more sore by the end of the day than it was at the beginning so I will have to moderate my enthusiasm for cycling.

Mrs Tootlepedal and I had arranged to go to Carlisle in the evening to hear our friend Sue singing in the Cathedral with the Cumbrian Rural Choirs, who get together once a year for a major sing.  Mrs Tootlepedal didn’t feel up to going, but as she was well enough to look after herself, I went off on my own.

There was a big audience and the best seat I could get was a hard wooden bench in the back of the choir stalls.  I sat under the blue sky ceiling of the cathedral and enjoyed the music. 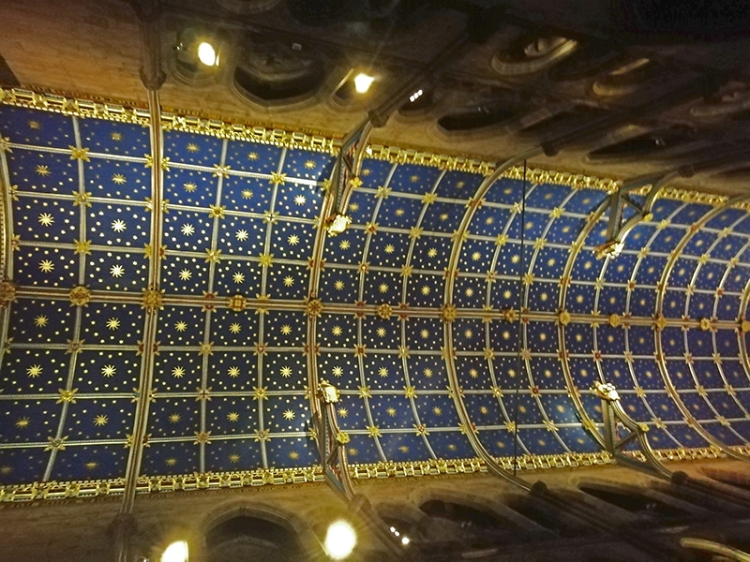 The choirs, complete with a very good professional orchestra and four excellent soloists, sang  the setting of The Seven Last Words of Christ by Haydn and Mozart’s Requiem.  As this amounted to nearly two hours of music sung in German and Latin, it was a tribute both to the composers and the performers, that I hardly noticed the uncomfortable seat at all.

I really enjoyed the Haydn, which I had never heard before.  There was a translation of the German in the programme and I always feel that it makes listening to church music much more enjoyable if you can get a feel of how the music and the words go together rather than just listening to some pleasant sounds.  The programme notes said that this piece is not often performed as it consists of seven adagios one after another, but I found it rolled on without dragging at all. It ends with a terrific earthquake.

The Mozart was good but the text was not so interesting as the Haydn and as the parts were often singing different words at the same time, it didn’t have quite the same emotional impact for me.  I sang it at a scratch performance a year or so ago and had more fun singing it then than listening to it now.  I don’t want to complain though. The performance was good and the music is lovely.  Also, it might have made a difference if it had been done in the first half of the concert while my mind and body were still fresh.

A flying siskin rounds off the post in the important position of the flying bird of the day. 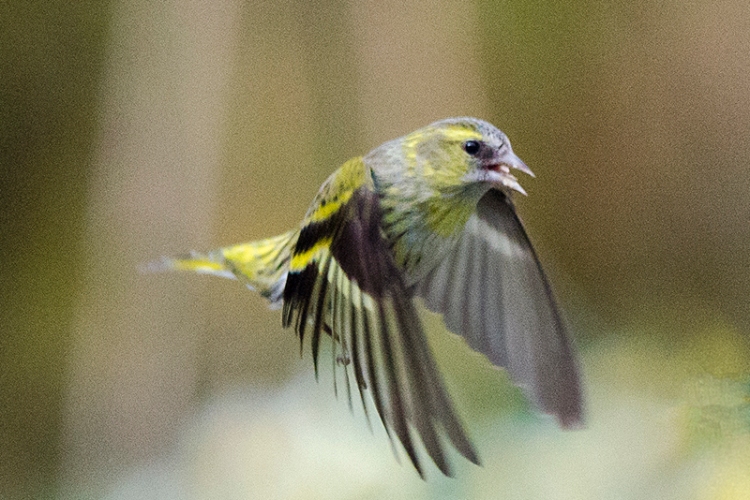