Today’s guest picture comes from our son Tony.  With all that dog walking going on, the household wellies need somewhere to have a good rest when they get home. 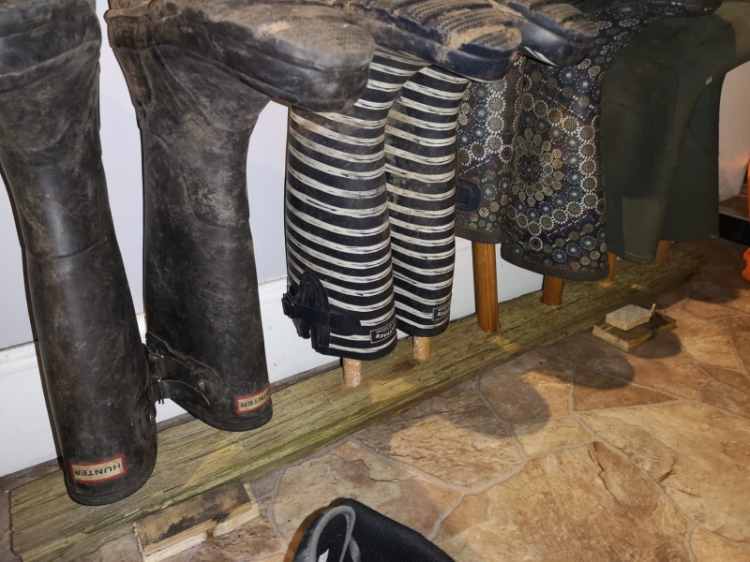 Our wintery weather continued with the temperature in low single figures all day.  We had been threatened with snow but got occasional sunny spells interrupted by heavy showers of rain and sleet instead.

I had a moment to watch the birds after breakfast.  There was blackbird about… 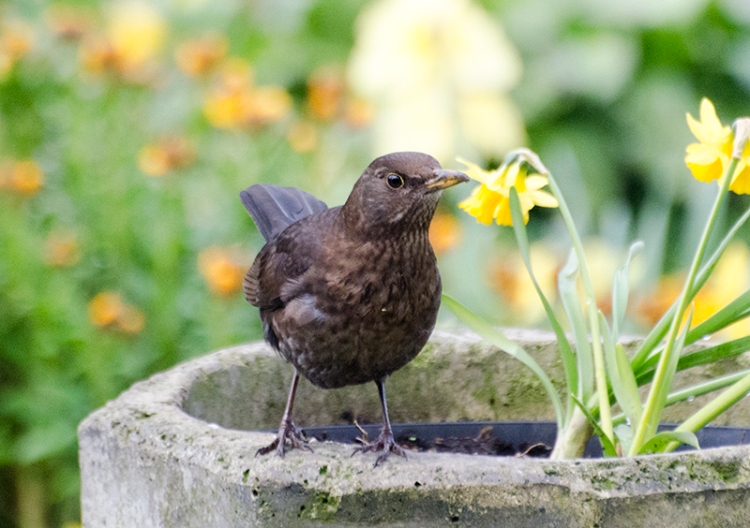 …and the fake tree was drawing in customers waiting for a perch at the feeder. 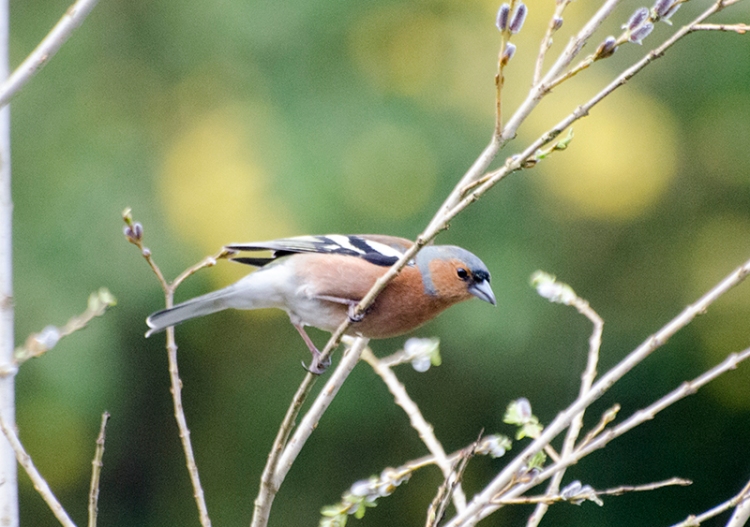 I took no pictures in the garden in the morning as I had to set off quite promptly to go to the hospital in Dumfries for my foot x-ray.

This was an entirely satisfactory process as the road over to Dumfries was very traffic free, I got a parking spot a few yards from the main entrance to the hospital (a very rare occurrence), was in and out of the x-ray department before my appointment time had even arrived, spent some useful cheese buying time in the farm shop which is just next to the hospital and where I also bought a packet of tasty parkin biscuits and finally took the scenic road home along the banks of the Nith Estuary. 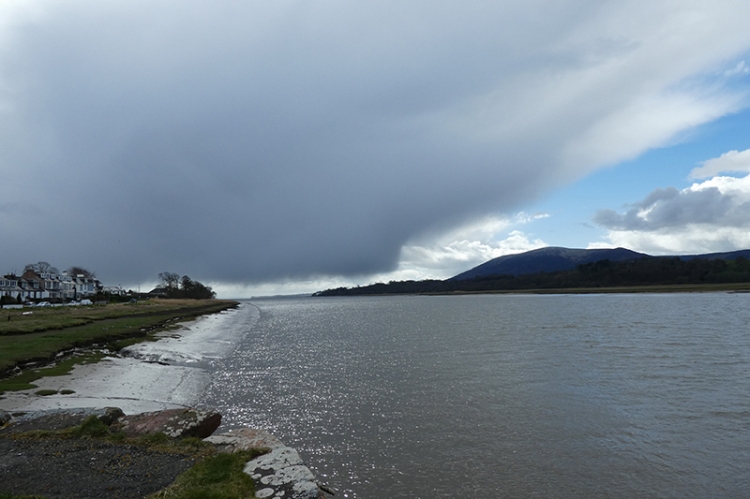 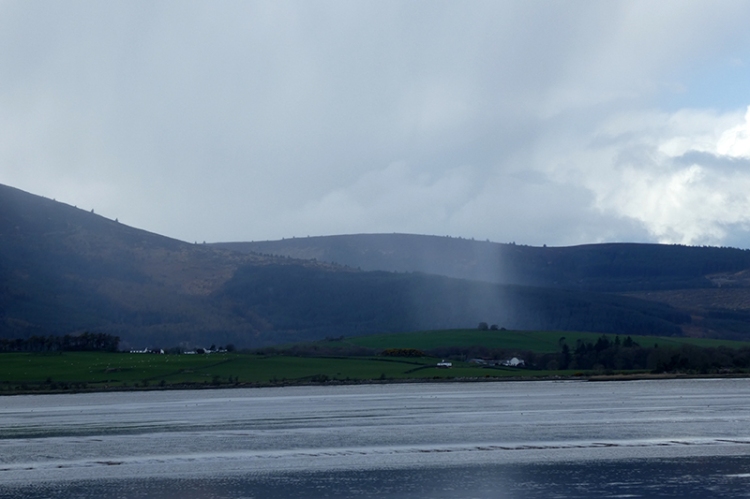 …but fortunately, the rain stayed away from where I was, Criffel emerged from the cloud.. 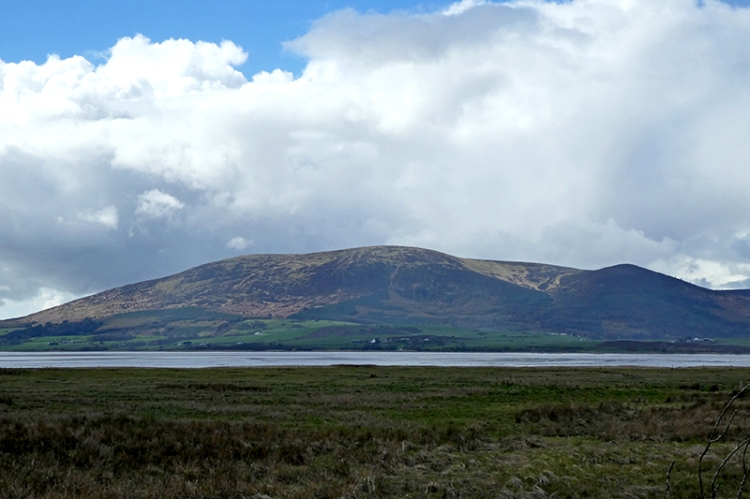 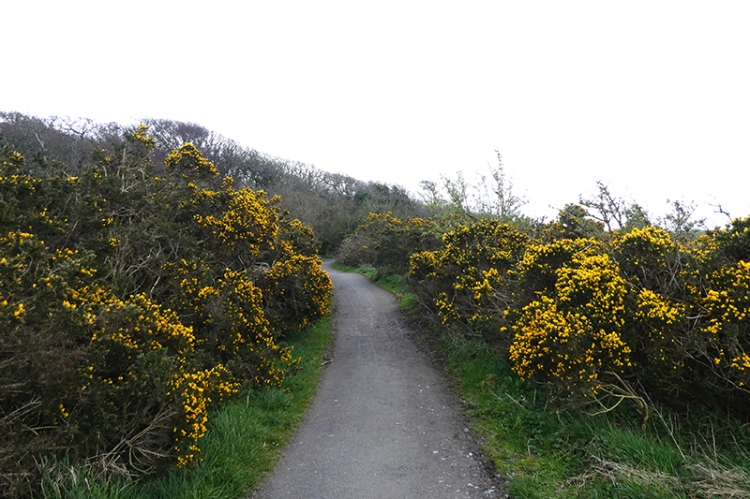 …past clumps of primroses… 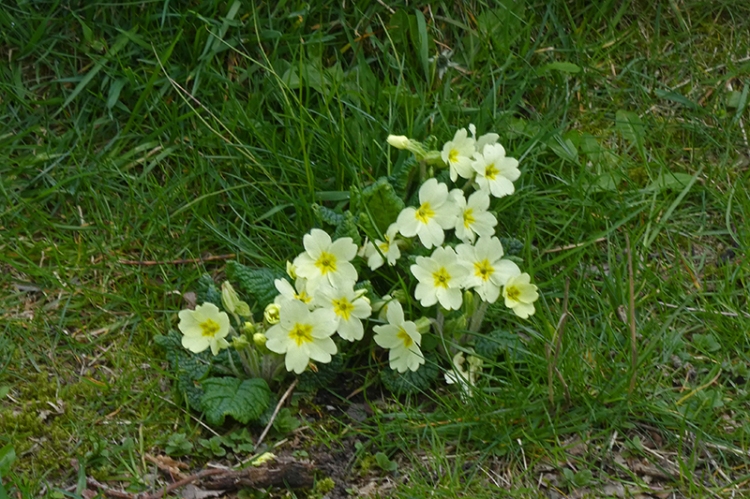 …and through a delightful wood… 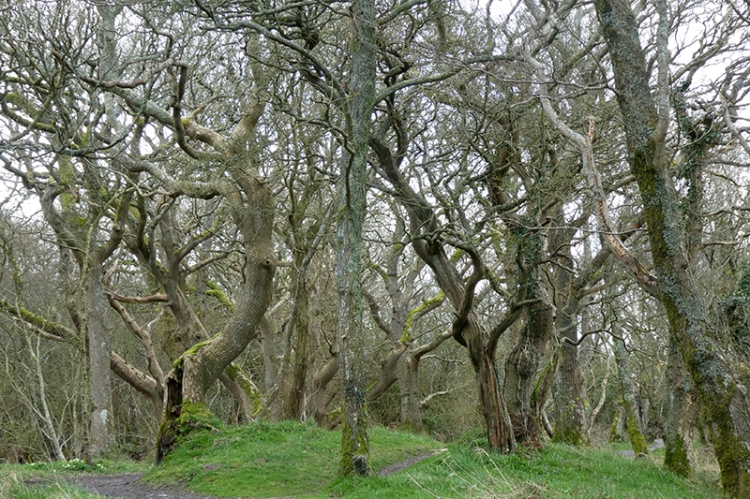 …before a hint of rain sent me back to the car, encouraged by loud cries from passing flights of geese. 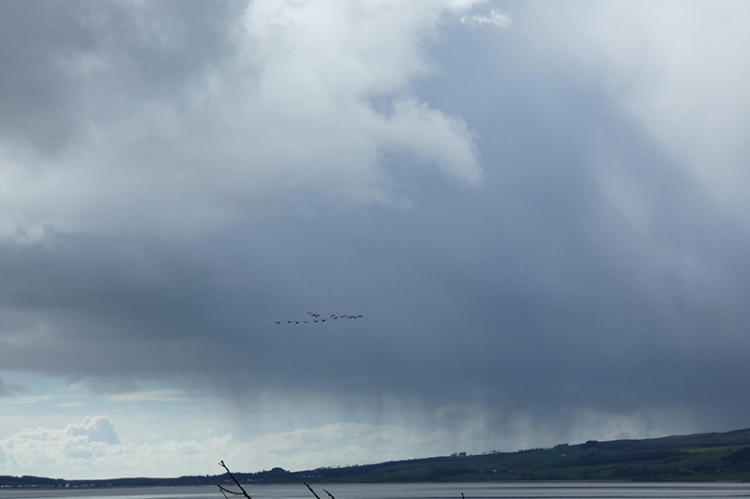 The drive home was largely free from traffic but I did have to battle through some sharp rain showers on the way.

Mrs Tootlepedal had had a very busy time helping out at the Buccleuch Centre coffee shop as they had had over 60 people for lunch, and we were both happy to have a quiet moment or two when we got home.

The sunflower hearts are going down at great speed so I was happy to see some siskins trying the peanuts.  They had various styles of approach to getting at the nuts, vertical head down…. 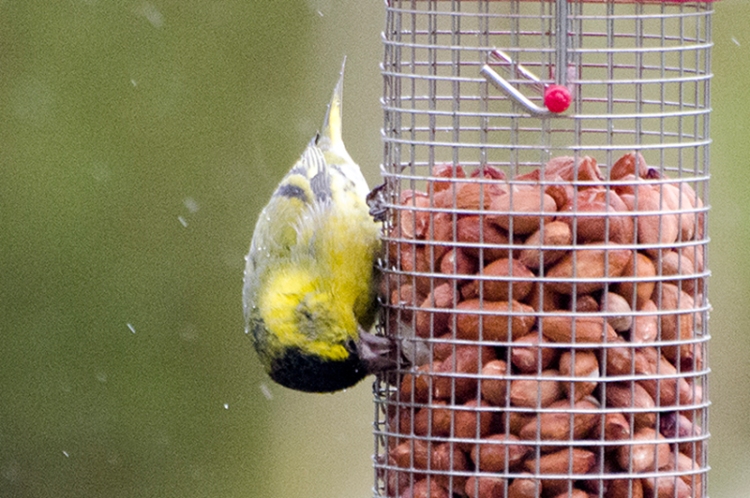 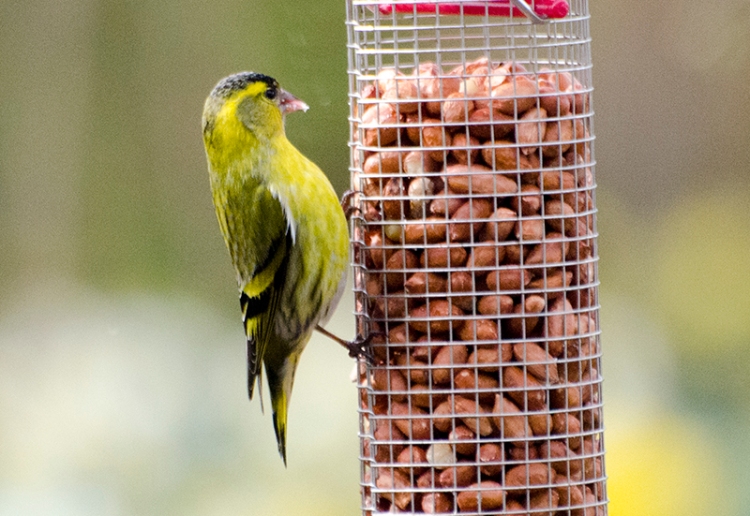 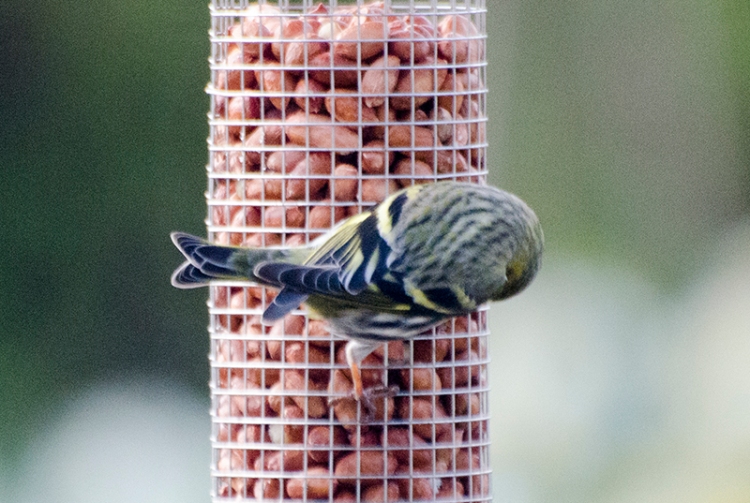 Meanwhile, competition for places at the sunflower seed feeder was intense. 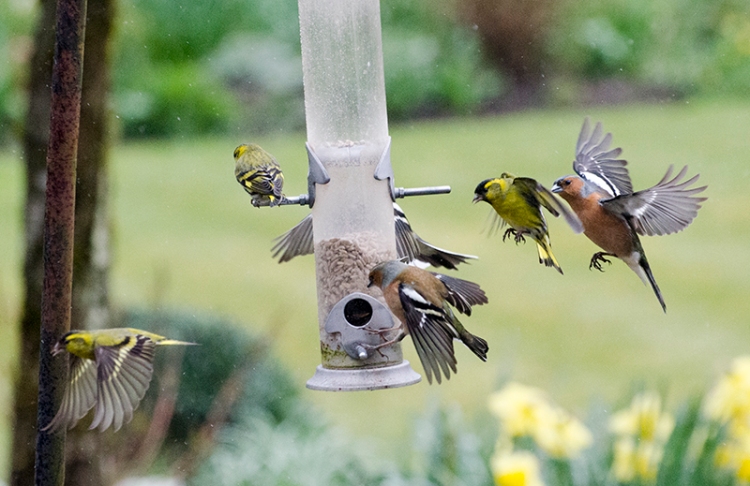 I had already filled the feeder once today.

Other forms of bird food were available. 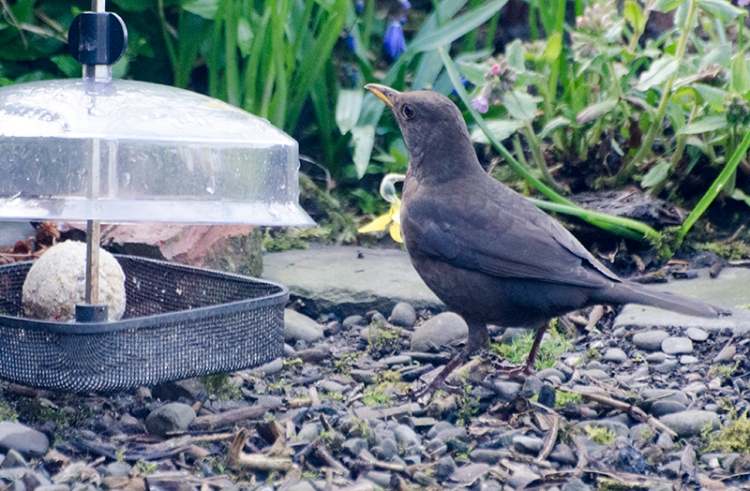 The redpoll was back. 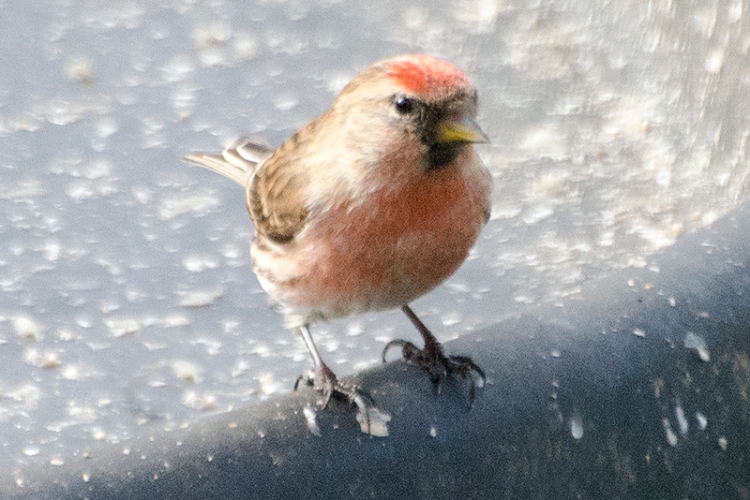 I took some advice on the little blue flower that has just come out and I can report that it is a brunnera. 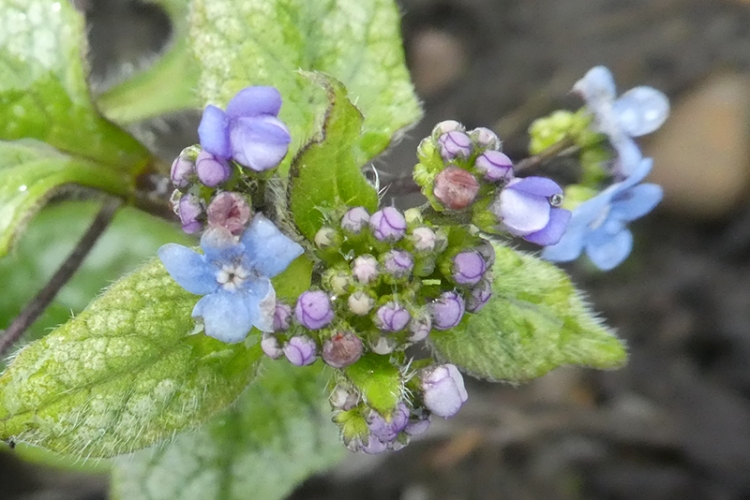 I put in some work on practising two short sets of Scottish tunes to play on my descant recorder at the concert in the evening and was distracted by the ever rolling catastrophe of the Brexit reporting on the telly.  The reporting and the process are equally catastrophic in my view as the contradictions inherent in the process are still largely unacknowledged by those promoting various schemes and those who are ignoring the realities are largely unchallenged in all the excitement of who is up and who is down.

Still, it all makes for something to talk about and I had an entertaining discussion with my choir friend Mike when I gave him a lift up to the Langholm Sings concert at the Westerkirk WRI meeting.

The concert itself, considering that we had had no practice and were without an accompanist or conductor, went better than might have been expected.  There were ten singers and the choir did five four part songs while three members sang unaccompanied solos (very nicely), one recited Daffodils by Wordsworth (also very nicely) and one tootled away merrily.

The audience was very polite and appreciative and we got a quiz half way through the concert and  an excellent light meal afterwards, as you would expect from a WRI meeting so the evening was much more enjoyable than I had anticipated.

The black spot of the day was receiving a debit card through the post from a bank that I do not use.  This indicated that some fraudster had opened an account in my name and required phoning up the bank in question.  After registering my complaint and having it acknowledged that an unauthorised account had been opened, the bank said that I would have to talk to their fraud department.  Crooks must have been very busy lately as they couldn’t put me through because the lines were fully engaged but they promised that the fraud department would ring me back.  I am still waiting at the time of writing.  This sort of thing takes some of the pleasure out of life.

Flying birds of the day however, bring it back again. 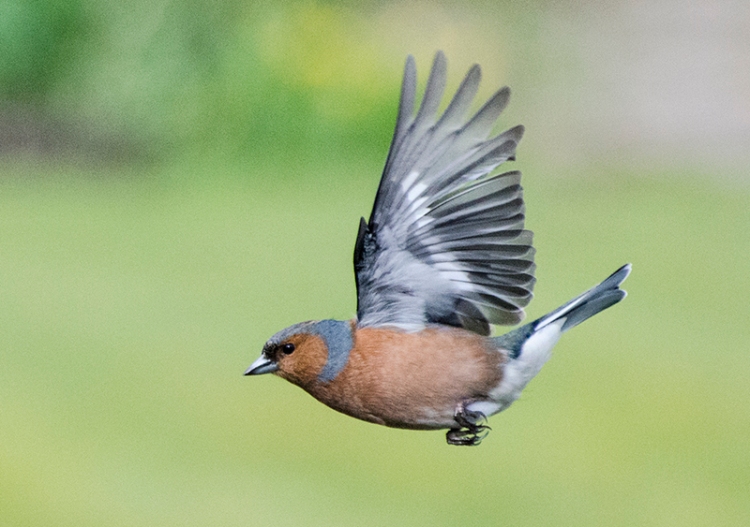 33 thoughts on “Foot and mouth or parking and parkin”