Today’s guest picture comes from our friend Bruce who had been touring the border hills country when he stopped to take this picture of the waterfall known as The Grey Mare’s Tail. 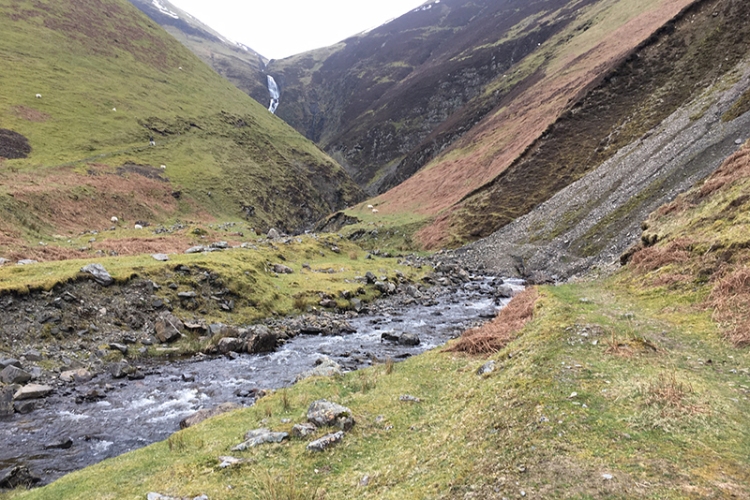 It was a theoretically warm day today with the thermometer registering 10 degrees but a very chilly northerly wind made it feel much cooler.  Still, it was dry as we cycled to church to sing in the choir so we weren’t complaining too much.

We had a cheerful set of hymns to sing today which made up for the grey weather.

When we got home, I took a general view from an upstairs window of the middle lawn which is currently surrounded by daffodils.  The shrubs are adding a bit of colour to the borders too. 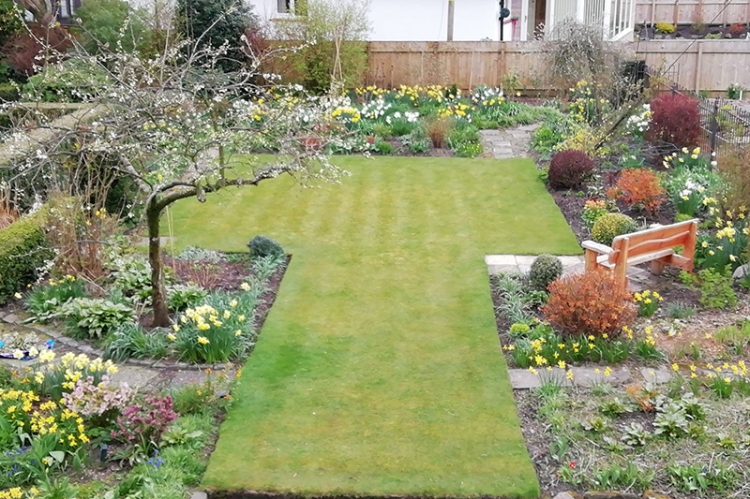 Then I had a look at the birds while I drank a cup of coffee.  The sunflower hearts are quite big for the small birds’ beaks and there is a lot of spillage. 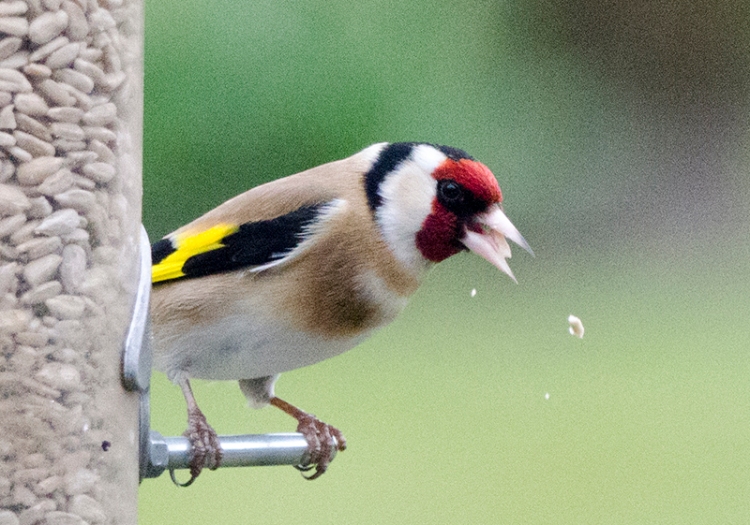 There is always a ground squad about to make sure that none of the fallen seed is wasted.  I counted fifteen chaffinches waiting under the feeder for manna from heaven today.

Some of the chaffinches tried to get onto the perches but this one waved its wings ineffectually and didn’t shift any of the incumbents. 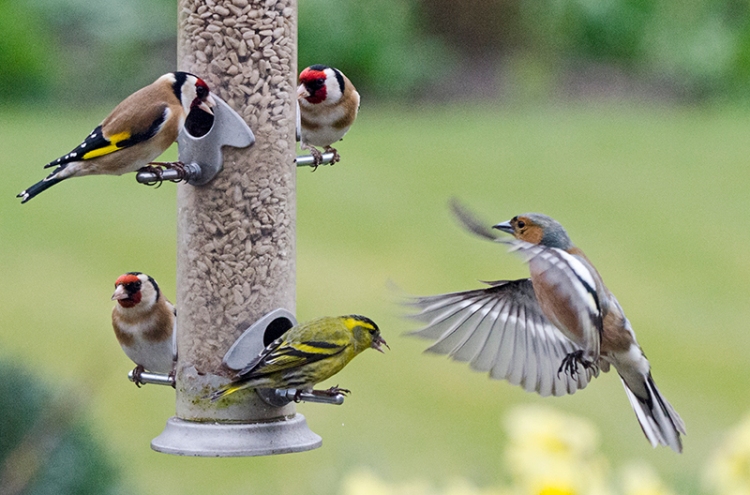 There was a steady churn of birds coming and going with some strong sentiments expressed along the way. 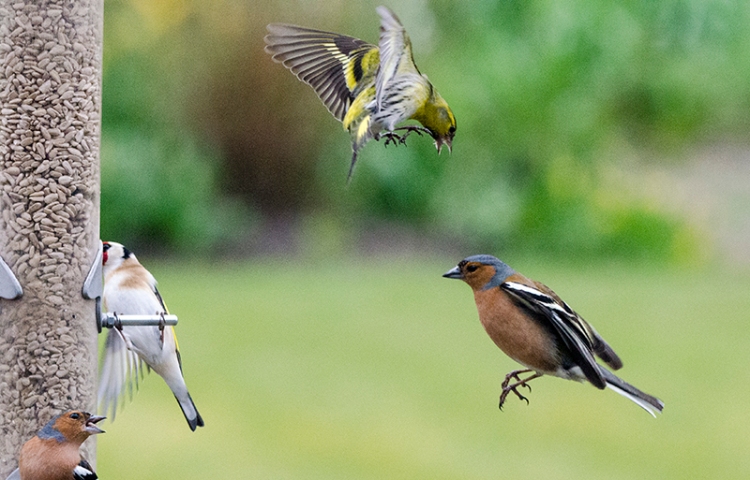 There is not much happening in the garden at the moment so rather than walk around it, I went off for a pedal on my new bike.  I was well wrapped up and with the wind behind me, it was an unalloyed pleasure to cycle up to the top of the hill at Callister.  It was quite a bit harder to battle back down the hill into the town but I managed to go a little bit further than I did yesterday and a little bit faster too so I was quite happy.

When I got home, I found that Mrs Tootlepedal had recovered her health well enough to have moved one of the new vegetable garden frames into place.  The new frames are intentionally narrower than the old frames so there will have to be some digging before they get fully settled in. 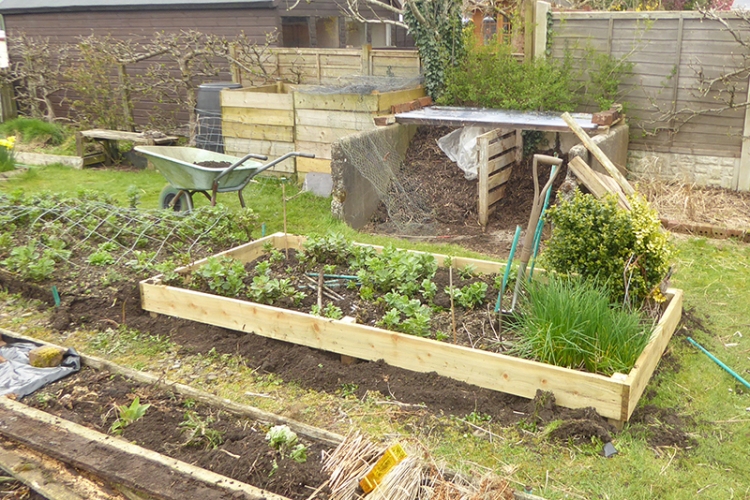 I noticed that more blossom had appeared on the plum tree so I recorded that fact before going for lunch. 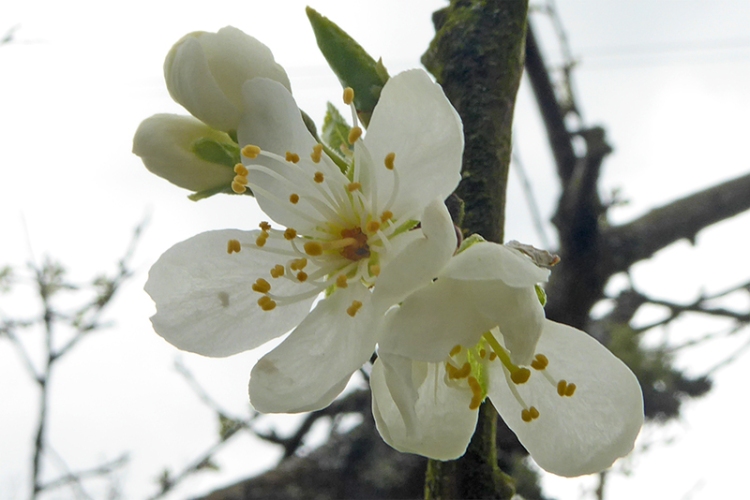 After lunch, I had time to go through a few of the songs that we are doing with our Carlisle choir before it was time to go off to Carlisle to sing.  I spotted a goldfinch trying out the peanuts as I was getting ready to go out to the car. 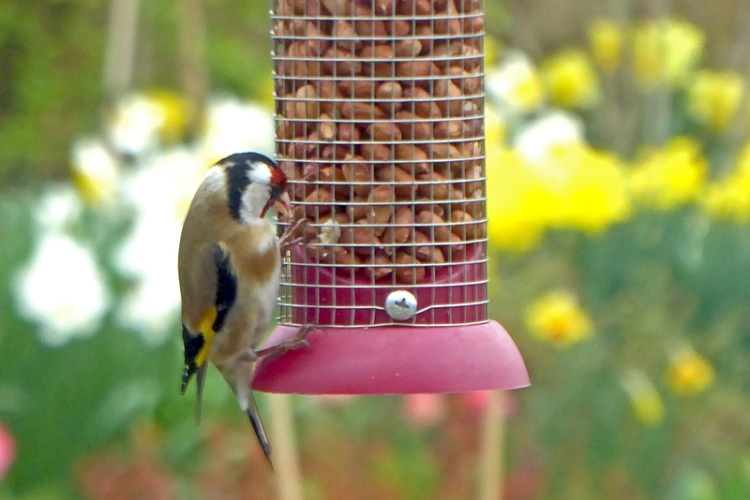 It didn’t look very happy but it had a good nibble before it flew off.

Our choir practice was excellent.  Our conductor was in very good form and the choir was responsive so we got a lot done.  The current set of songs have a lot of good singing in them and are difficult enough to keep me working without being so hard as to make me depressed.

With two concerts, a church service and three practices since Tuesday, it has been a full week of singing and it is very heartening to find that the combination of speech therapy and singing lessons helped my previously creaky voice to survive.

We drove home in a sort of hazy sunshine but by the time that we got back to Langholm, it was all haze and no sunshine.  As we parked the car, I saw that the first of the Lithodora ‘Heavenly Blue’ flowers had appeared. 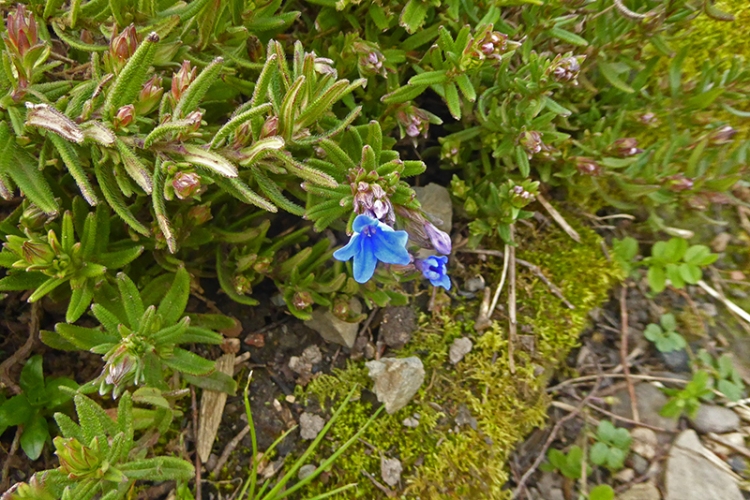 My camera resolutely refused to show just how blue the flower is so I will have to try again in a different light.

It had no problem even in the dim light with the glorious colour of the cowslippy things which are going from strength to strength…. 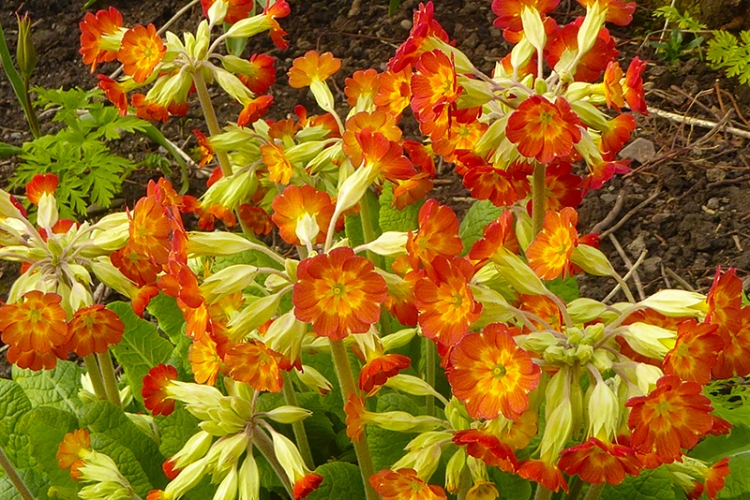 …and it enjoyed the fresh green of a philadelphus by the hedge. 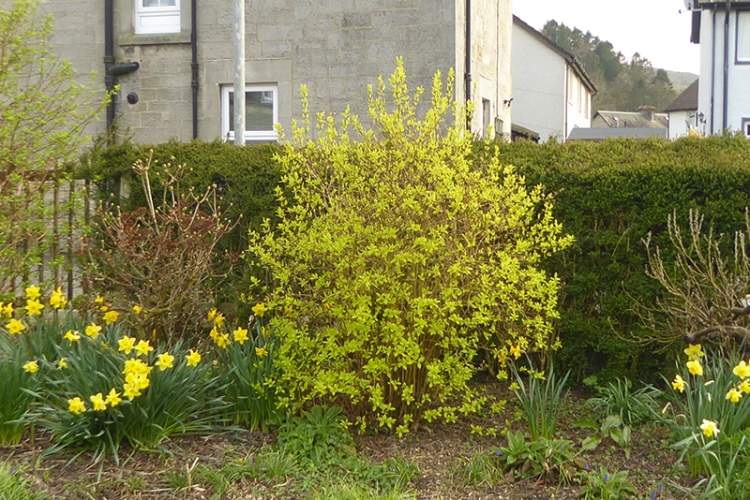 Although the light was fading now, there was enough left to show a redpoll visiting the feeder. It was just in time because although I had filled the feeder twice during the day, the seed was almost all gone again. 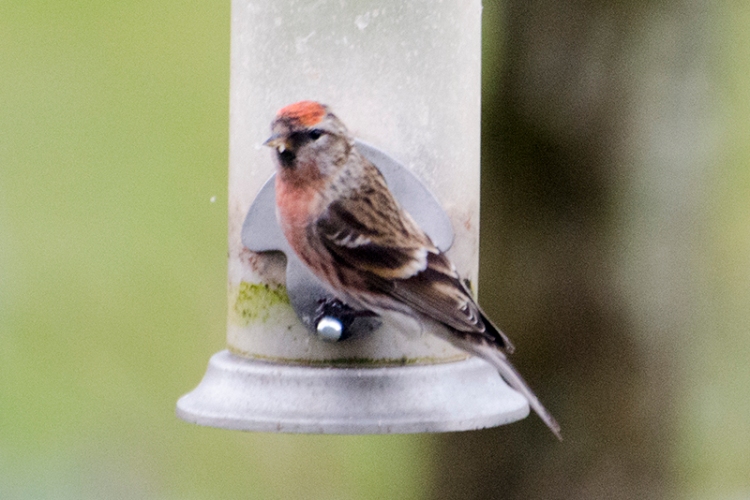 I had made a slow cooked stew with a rolled shoulder of lamb in the morning before going to church and Mrs Tootlepedal cooked some mashed  potatoes and cabbage to go with it and the result was entirely satisfactory.  The slow cooker is a wonderful thing.

Looking at the forecast, an easterly wind is set to continue for several days so spring may remain on hold for a while.

The flying bird of the day is two chaffinches, looking a bit uncertain of which is the best way to go.  You can’t avoid Brexit metaphors these days. 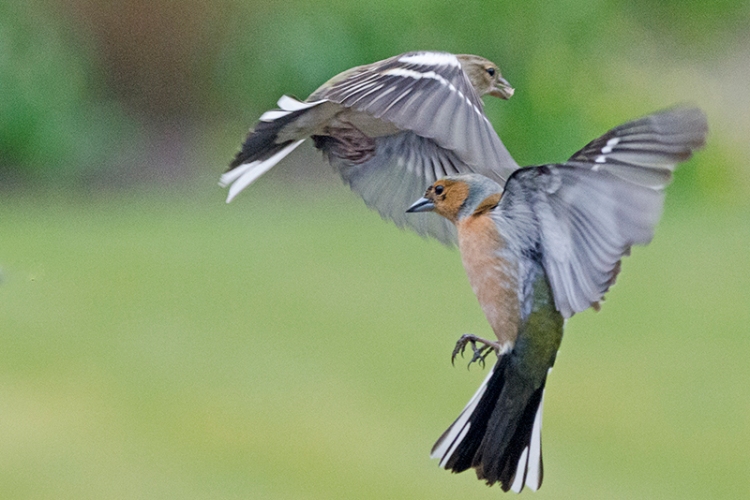 Footnote:  I don’t generally use a photograph if I haven’t taken it on the day of the post but I found that I had overlooked this one from last Wednesday.  It was too bright to waste.

It shows the eye popping display of flowers at the Houghton Hall Garden Centre.  This is where Mrs Tootlepedal found her cheerful primrose for the chimney pot, though hers came from a subsidiary bench where bargains were to be found. 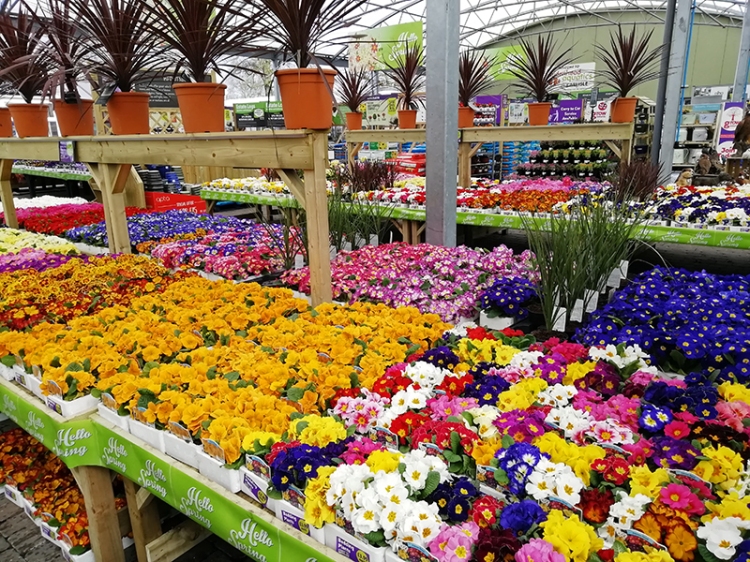