Today’s guest picture is a weather vane from the Somerset Rural Life Museum sent to me by Venetia, my Somerset correspondent.  The weather vane is a memorial to a long serving volunteer at the museum, a nice idea. 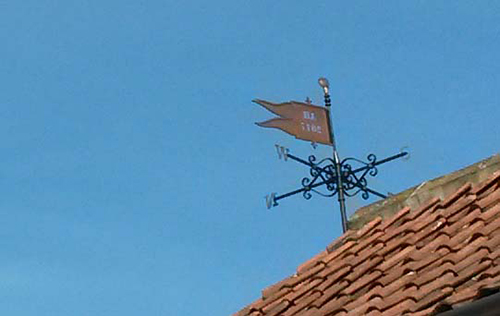 The weather here was warm and sunny but not quite as warm and sunny as yesterday as the wind was stronger and the sky a bit hazier.  Nevertheless, it was a great day to be out in the garden, and after an early visit to the town for a bit of business, I spent a lot of the day in the garden.

Before I went out into the garden, I took the advice of a correspondent and tried applying some ice (in this case, a packet of frozen peas wrapped in a  tea towel) to my tender Achilles tendon.  It gave me some relief and I repeated the process a couple more times through the day.

There was plenty to look in the garden as well as to do so in between dead heading daffodils, sawing the sweet pea frame down to fit the new beds, and sieving compost, I admired a small corps de ballet of Ballerina tulips… 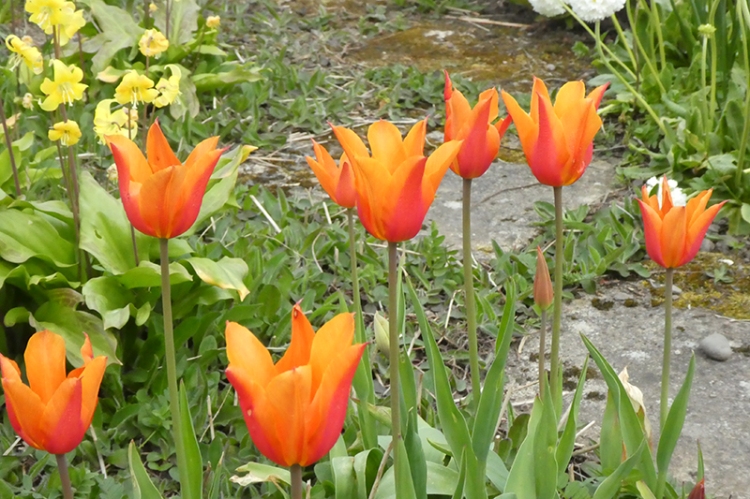 …and a single in-your-face orange variety of which I do not know the name. 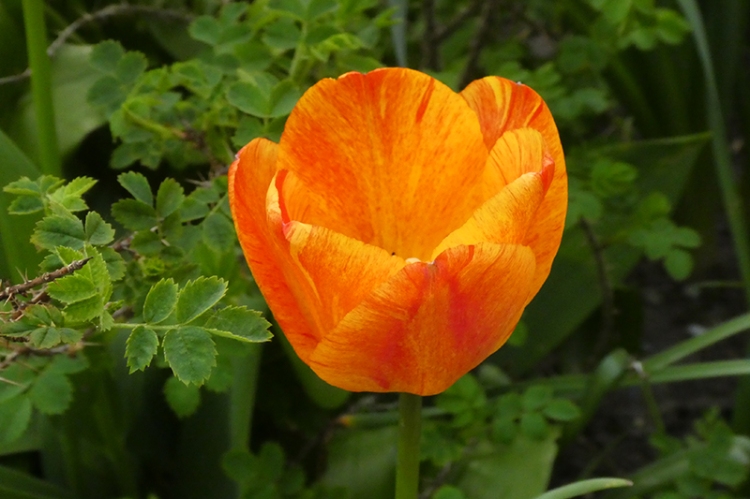 Pond skaters have come to the pond in numbers. 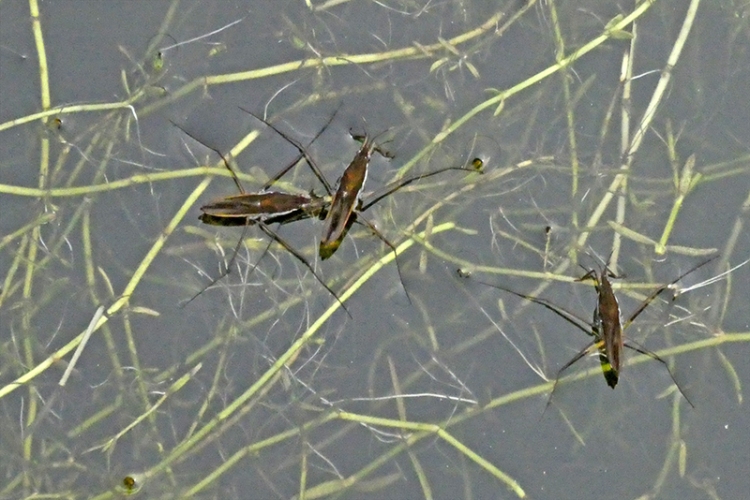 Blossoms have come out on two of the three espalier apples…

…and it shouldn’t be long before they are joined by the third one.

Mrs Tootlepedal is very pleased with her trilliums which have just come out too.  They were given to her by Mike Tinker and by coincidence, he passed the garden just as we were looking at them and came in to share the experience.  They are beginning to multiply so we are hoping for more next year.

I am noting new things all the time and these tulips, the bluebell, the Solomon’s seal and an alpine clematis have all appeared over the last couple of days.

On top of that, we are getting very excited by the prospect of entering the age of the azalea.

If you want eye catching green, then euphorbias are the thing to have.  Mrs Tootlepedal has them in flashy and discreet but they are both very green.

We had to stay at home as we  were expecting a visit from an electrical engineer who was going to do interesting things to our meter.  He arrived bang on time, was very polite and efficient, did some extra work beyond the call of duty to make things convenient for another engineer who is coming next week, complimented me on the coffee that I made for him and tidied everything up very neatly before he left.  Not everything in the modern world has gone to pot!

I was interested to see that he took photographs before, during and after he had finished his task as a record of what he had done.   That seemed like a very good idea to me.

While he worked, we stayed out in the garden and I looked at the trout lilies which are enjoying the good weather a lot…

…and the Christmas tree which is growing in every possible direction. 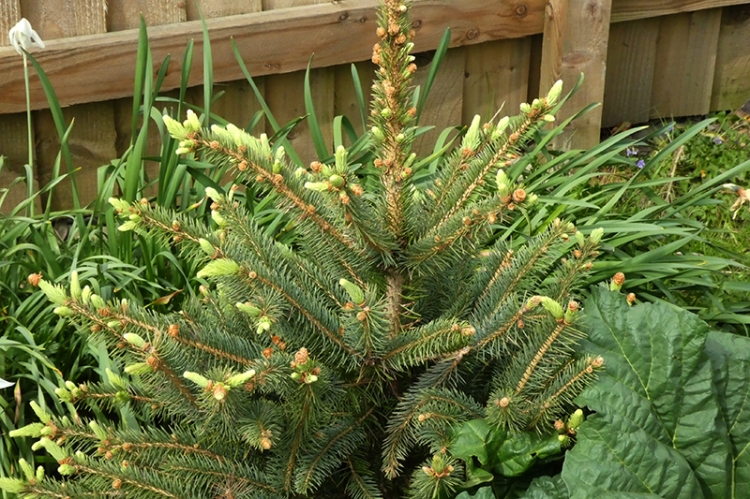 We went in for lunch when the engineer had gone and I saw this blackbird with nesting material on the chimney pot outside.  Mrs Tootlepedal tells me that it is nesting in the climbing hydrangea growing on the front wall of the house.

On the feeder itself, things were much as normal… 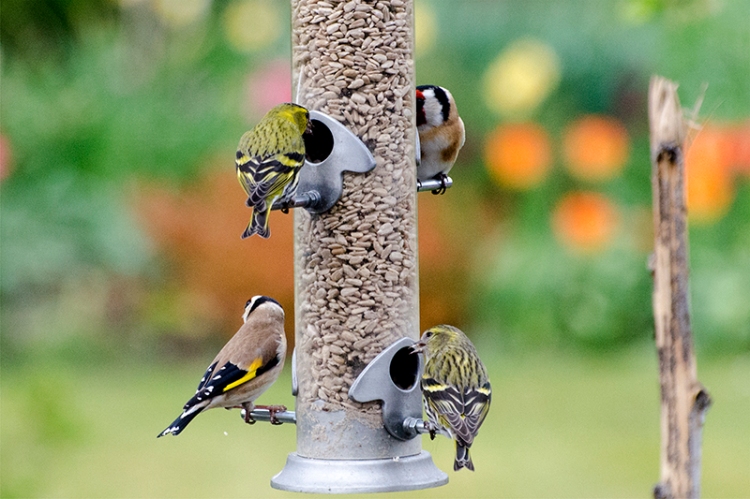 ..but we did have visits from too very contrasting birds, a dove and a hawk.

…and gave us a very exciting chase sequence to watch as it pursued a little bird across and out of the garden with many a squeal of rubber and handbrake turns on the way.

In the afternoon, I looked at the front lawn and felt that this was the day to scarify it.

The panel below shows the unscarified lawn on the left, looking as though butter wouldn’t melt in its mouth, and on the right, the very large amounts of moss that the machine lifted as it passed.

The bottom panel shows the results of going over the lawn a couple of times with the mower on a high setting to pick up the moss and one of the three wheelbarrow loads of moss that I took away.  Don’t be deceived, there is still a mass of moss in the lawn.  I will scarify it again in a few weeks time.

A poor peacock butterfly was trying to sun itself on the drive and had to keep flying up into the air as I passed with wheelbarrow after wheelbarrow.  It settled down again each time and must have been really fed up by the time that I finished disturbing it. 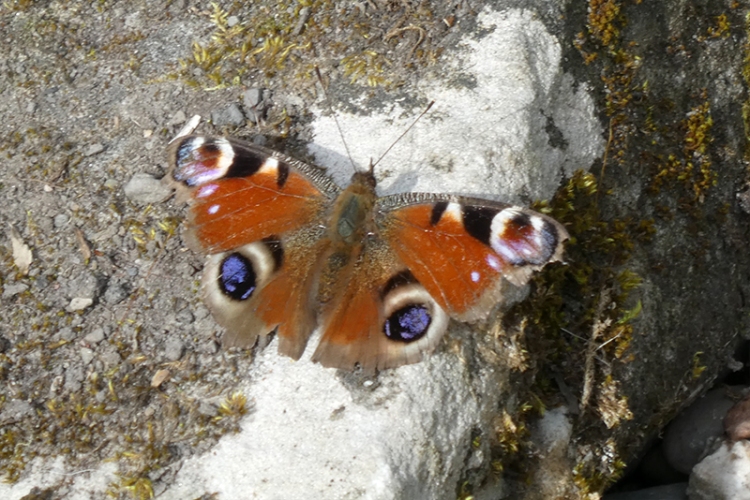 The peacocks are appearing about a week earlier than usual this year.

While I was caring for the lawn, Mrs Tootlepedal was preparing her sweet pea fortress for the coming hostilities with the sparrows.  I predict a win for Mrs Tootlepedal this year.

As the afternoon wore on, I felt that I should make good use of the day by going for another short cycle ride and went out for fourteen miles at a gentle pace, clad in a T shirt and shorts.

The wind was gusting up to 20 mph and blew me up to the top of Callister.  I stopped on the way down to take in the view.  The garden may be springlike but it will the best part of another month until the hills go green. 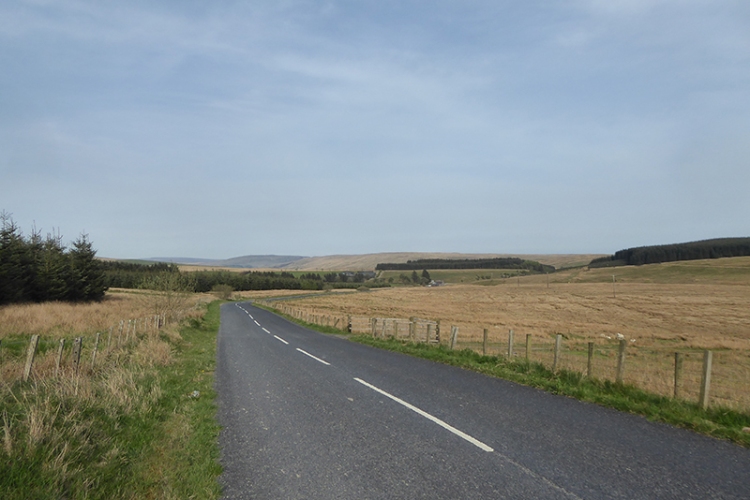 I had to pedal hard just to get down the hill into the wind but I made it back to the town and enjoyed the cherry trees along the banks of the Esk between the bridges. 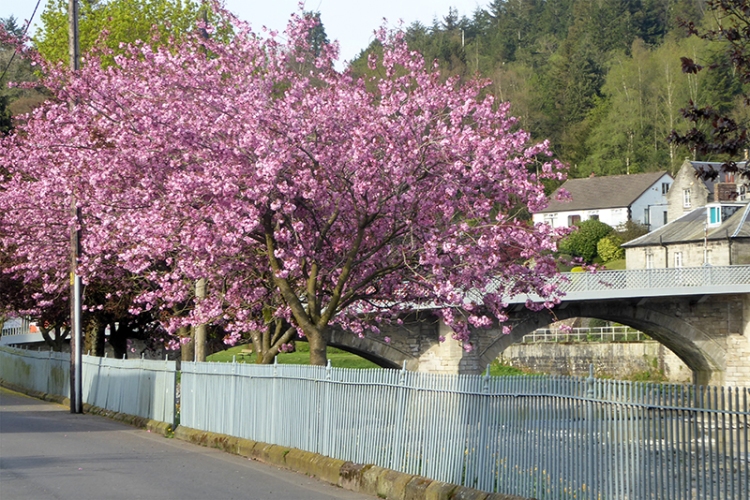 Our good spell of weather is coming to an end and it is going to get gradually but steadily cooler over the next few days and we may even see some much needed rain soon.  I just hope that it knows when to stop.  I won’t need my cycling T shirt and shorts again for a while, I fear.

The flying bird of the day was almost a sparrow hawk…

…but as you can see, I was too slow, so a goldfinch takes over the duty instead (no doubt keeping a sharp eye open for any hawks). 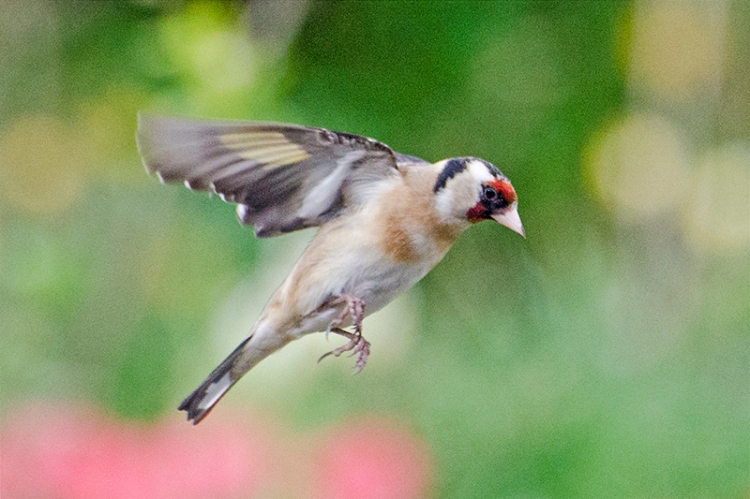 21 thoughts on “Icicling and bicycling”