Today’s guest picture comes from my sister Mary.  She was hit in the eye by this burst of colour on her morning walk to Kenwood House.

After breakfast, I cycled up to the town to do some business including paying in a handsome cheque kindly sent to me by the government.  This was a refund for the very expensive road tax which I had paid on our old car.  One of the benefits of the little white zingy thingy is that it is tax free to put on the road, part of the inducements to go electric.  These benefits will doubtless disappear when more people start buying electric cars but judging by the published figures on the rate of sales, I should be safe for a while yet.

Then  I drove off into England for the third day running, this time to see my singing teacher Mary.  My ambition is to be able to sing a simple song more or less in tune and in a pleasant manner so she has her work cut out on both fronts.  However, she is a first rate teacher and I came away feeling that with work, I might be able to achieve my goal.

An added bonus was being able to watch a small flock of lapwings flying around in the field opposite her house after the lesson.

It was another fine day so when I got home, I took a walk round the garden in the hope that more azaleas would have come out.  They are very reluctant.

This one has been covered with  promising buds for ages but it is still strangely reluctant to burst into flower.  Our warmer weather is set to continue for a day or two so I am keeping my hopes up.

When I went in, I found that Nancy, the Archive Group treasurer and chief data miner for our local newspaper index, had brought round the sheets which will mean when they have been entered into the database that we have reached 1900.  Three cheers to all involved.

It was soon time for lunch and after I had eaten my soup and cheese and done the crossword, the downside of the little white thingy came into play.  The crucial word here is “white” and some pointed remarks from Mrs Tootlepedal drew my attention to the fact that a white car shows the dirt.  For many years now I have avoided washing our car because in my view, it just encourages more dirt, but even I could see that the new car is going to require regular washing.  Ah well, nothing in the world is quite perfect.

After I had washed to car, the middle lawn called to me.  The moss eating mixture which I applied a few weeks ago seems to have had an effect but there was still a very mossy patch in the middle of the lawn so I got out the scarifier and gave the whole lawn a going over.  When I had collected the moss with the mower, the lawn looked quite potential…

…though my assistant thought that there was still work to be done.

…and to be fair, there is still quite a bit of moss about.

As you can see from the lawn picture, we are between colour at the moment with the tulips and daffodils past but there is a lot of green about…

…and there are spots of colour here and there.

The sweet rocket is coming out…

…the tree peony is very nearly out…

…and the Japanese azalea is doing its best too. 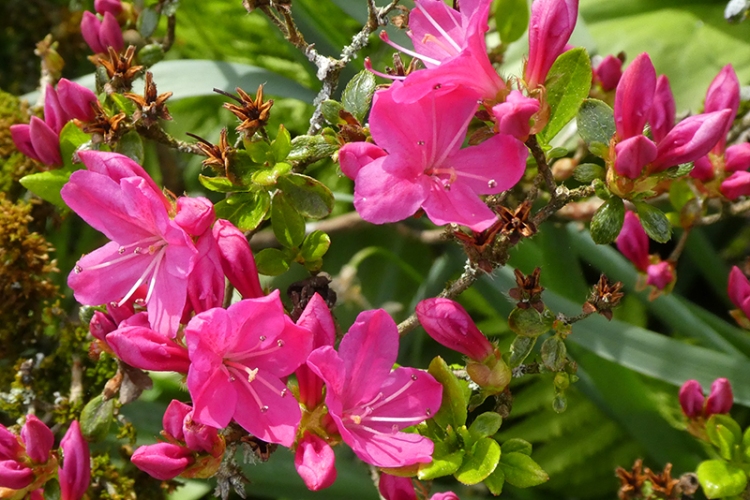 …and Mrs Tootlepedal has a purple stemmed variety in another bed. 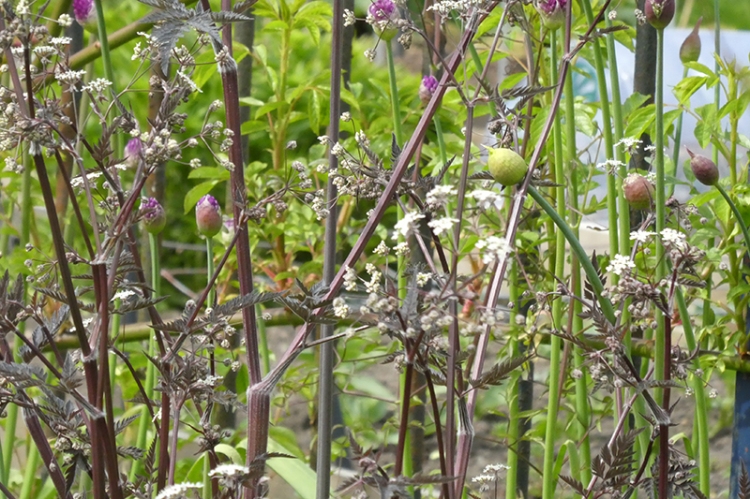 I went round to the back of the house, to check what flowers could be seen along the dam…

…and found daisies, potentilla and the first of the aquilegia, one of my favourite flowers.

…had been joined by a blue variety…

…and the first geraniums have arrived too.

…and then went off for another short and gentle therapeutic pedal on the slow bike.

I passed the bluebells on the hill again without walking up to visit them this time.

When I had been down in England in the morning, I had noticed that quite a few hawthorns had come out and I was interested to see if ours were out too.  They weren’t….

…but they are going to make a good show when they do arrive.

Although most of our trees are now green, the alders along the river sides are still waiting to join in, as this picture of the Glencorf Burn shows.

…and checked out the usual customers on the feeder.

My flute pupil Luke came in the early evening and I was able to use a tip which I had picked up from my singing lesson to help him get over an awkward corner in one of our pieces.

I also introduced him to Scott Joplin as a change from baroque sonatas.

As the sun sank after a full day’s work, I resisted the temptation to take a sunset picture as I already had too many for the post and so all that is left now is the flying bird of the day.  Or rather, in today’s case, the fleeing bird of the day.

24 thoughts on “The shock of the new”