Today’s guest picture comes from our son Tony who went to the Kirkcaldy Highland Games on a very wet day last weekend.  For reasons which are not entirely clear to me, the games are held on the beach.   These cyclists must have been working very hard. 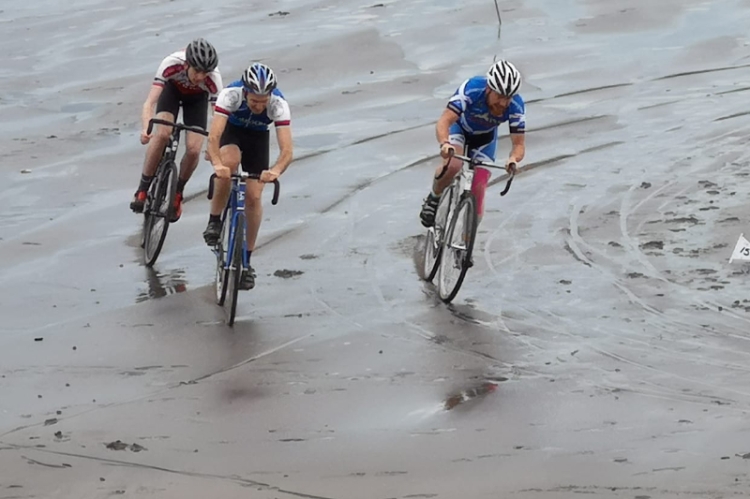 After yesterday’s calm and sunny weather, we retreated into chilly, windy and grey conditions today.  As I wasn’t feeling at my perkiest, I was content not to to try to go out on the slow bike and settled happily for coffee with Sandy instead.

Before he arrived, I had a look round the garden.  The chives had several somnolent bees lying motionless on them. 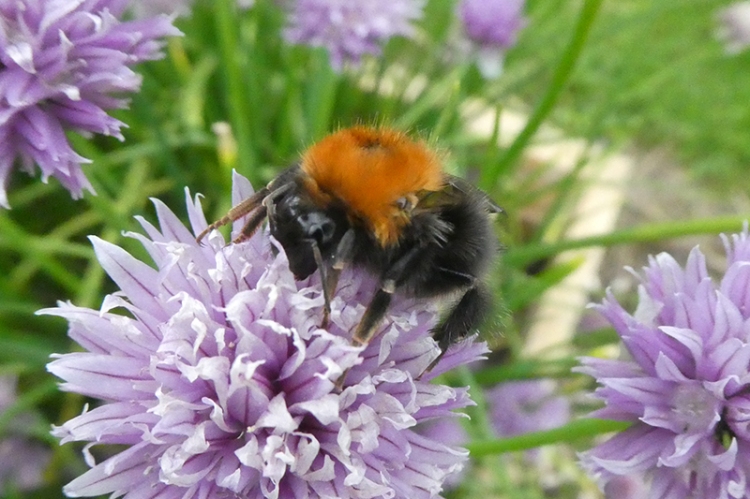 Mrs Tootlepedal wondered if they were drunk.  They weren’t paralysed because they had moved when I checked later.

I am very taken with the new irises and find it hard not to take another picture if I walk past them.

Sometimes, I walk past them on purpose.

The first of the pinks has appeared…

…and the astrantias are going from strength to strength. 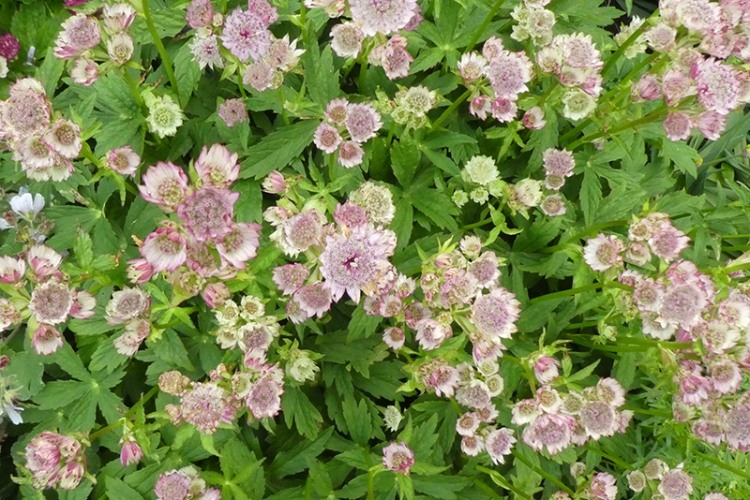 I went out of the garden and walked along the dam at the back of the house.  As I went along I saw a flourishing potentilla and a clover trailing down the concrete side of the dam…

…a lovely lily which our neighbour Kenny has planted on his side of the dam and one of the few flowers on the old fashioned fuchsia at the back gate.

When Sandy came we shared foot woes as his feet are in an even worse state than mine.

After he left, I took some time to watch the birds while I did the crossword.  We had a bit of variety with siskins and a greenfinch… 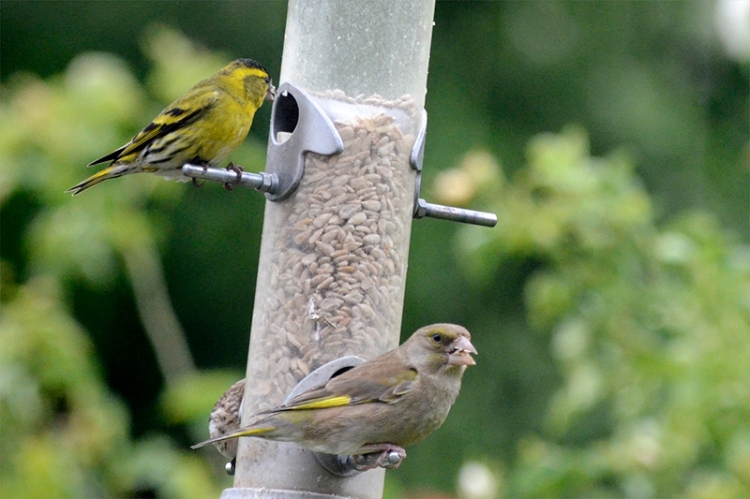 …and a  sparrow had a go at a chaffinch for daring to share the feeder. 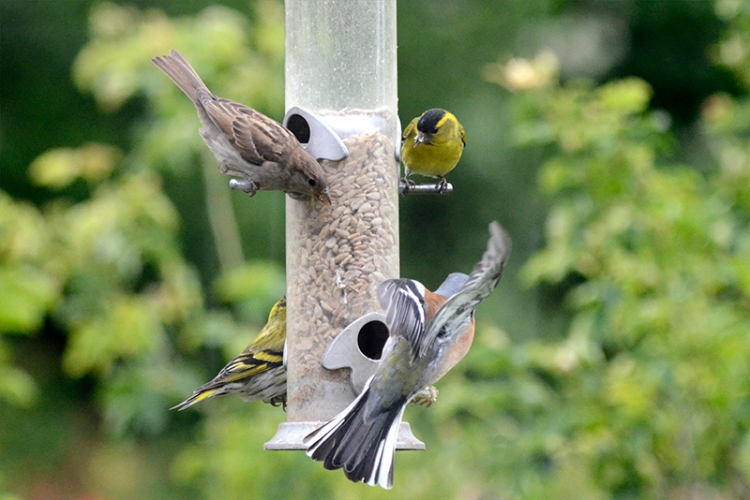 I was rather surprised to look up from a tricky clue at one point and see a full house of goldfinches. 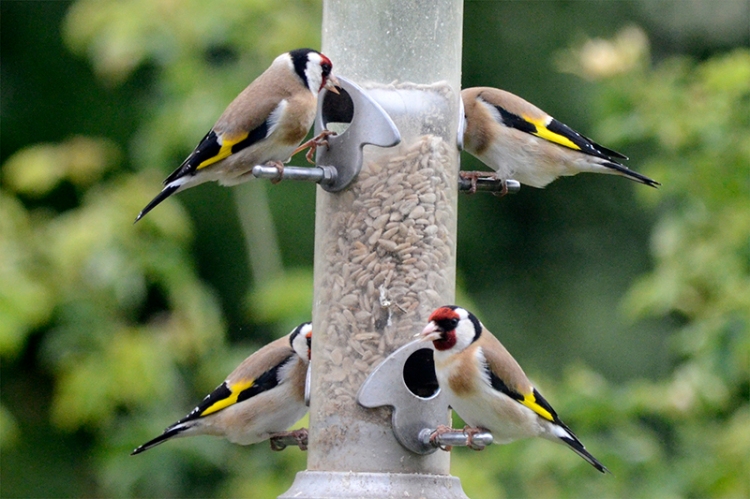 I finished the crossword and went back out into the garden where I did some shredding of hedge clippings and some more sieving of compost.  Then I went in and made some lentil and bacon soup for lunch.  I have taken to using as much turmeric as possible in my soups because it is is supposed to be beneficial for arthritis sufferers but I am still waiting for the miracle cure.  Still, the soup tasted good so I am not complaining.

After lunch, I mowed the front lawn to clear the remaining moss after yesterday’s scarification and felt a bit depressed when I looked at the result.  The grass will need feeding but what is really needed is a spell of warm weather to get it growing.

While I was out, I had another look round.  More educated onions are out… 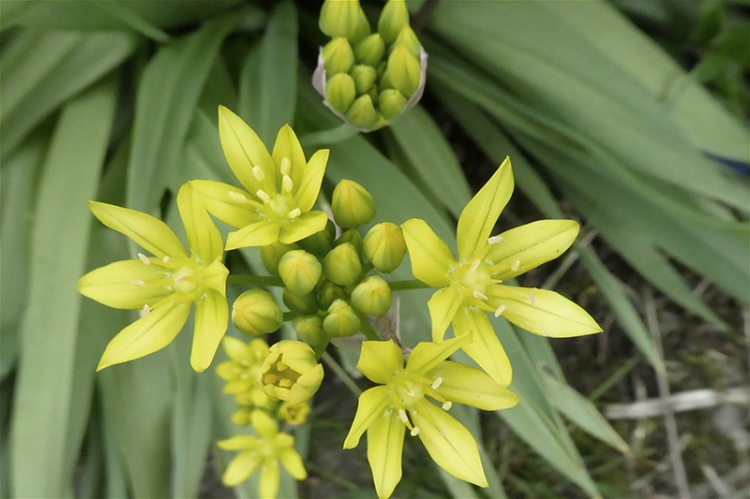 …and I had a close look at my favourite lupin.  When you stick your nose in it, it seems to be lit from within. 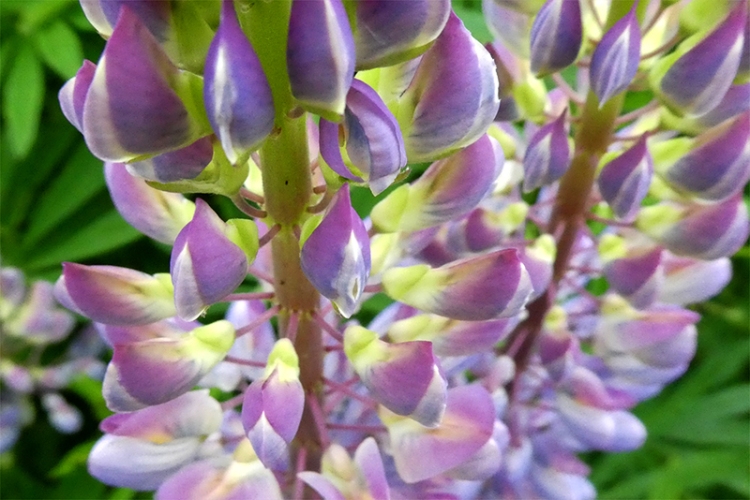 One of the stalks had been snapped off by wind or rain (or both) near the top and this gave me a chance to take an unusual angle on the flowers.

In spite of the brisk wind, there were plenty of bees about.

Some plants, like a couple of our azaleas and one of the rhododendrons did not take well to the combination of cool and dry weather after an early short hot spell and produced buds but no flowers.  Now we are worried that even after some rain, the pale peonies look as though they might be going the same way.  They have looked like this for weeks… 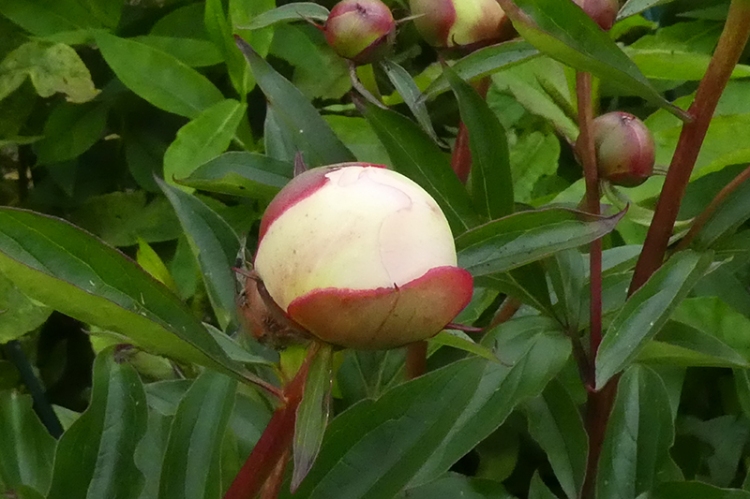 …and don’t seem to have any intention of bursting into flower.

I made the mistake of going in and sitting down i a comfortable chair for a moment, and mysteriously I fell asleep  and wasted two hours of my life.

I hadn’t got anything better to do and it gave my sore feet a rest so I expect it was a good scheme after all.

I roused myself and went out for a last look round the garden.  Another of the new irises has popped up and it called to me.

There were still slow moving bees on the chives so I took the opportunity of capturing one of the bees knees.  I thought that it was very good.

Not all our lupins are brightly coloured.

As I was going back in, I noticed a rather odd looking foxglove. For some reason, It has put out a large misshapen flower on the very top of its stalk and to my eyes, it looks rather like one of the Chinese dragons that you see at festival times.

I got back in and made a dish of baked spinach and eggs with a cheese sauce for our tea.  Mrs Tootlepedal only had time for a mouthful or two before she went out to act as a front-of-house person at the Buccleuch Centre and as she is not back yet, I can only hope that she enjoyed the show.  The show is a screening of Romeo and Juliet by the Royal Ballet.  I didn’t tell her, but it turns out badly in the end so I hope that she is not upset.

I just managed to catch a flying bird of the day as a siskin navigated round the feeder pole.