Today’s guest picture is another from Stephen’s visit to North Queensland. As well as idyllic beaches, he and his wife visited the Kuranda aviary where amongst others, they encountered this striking pair of birds. 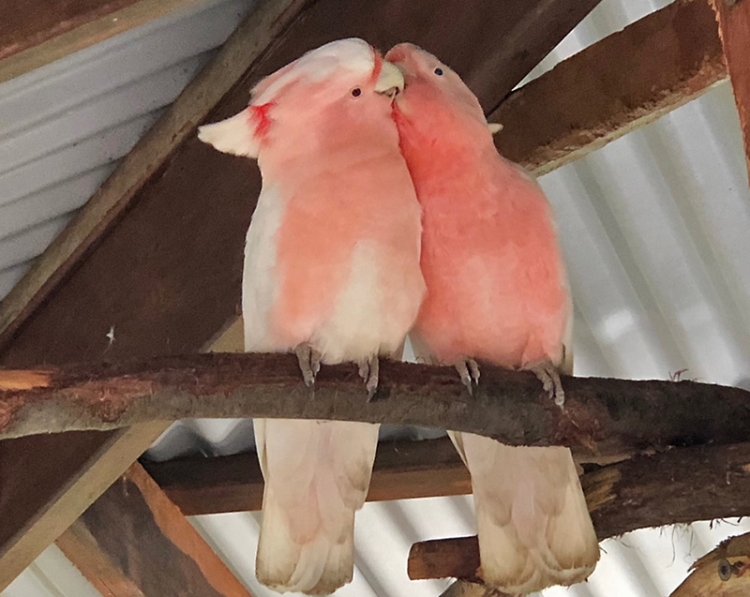 The weather gods relented today, and after sending us more overnight rain, they let up by morning and allowed us to enjoy a dry and sometimes sunny day today. This gave us the chance to do some work in the garden and let me take a few pictures while I was out there.

Well, to be honest, I took a lot of pictures but I am putting in this panel of four pale flowers to stand for them all. 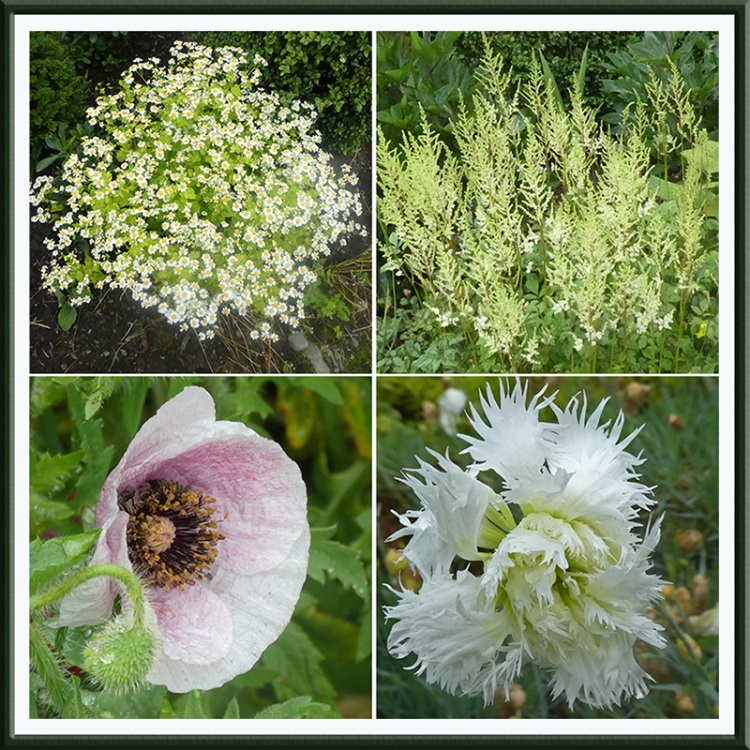 It was pleasantly warm and the wind was noticeable but not offensive so there was really no reason why I should not have gone out for a cycle ride after breakfast to make good use of the day. All the same, I managed to find several reasons; a crossword, coffee, dead heading, picking sweet peas and so on until I finally ran out of excuses and set off for a pedal about midday.

To tell the truth, I didn’t feel exactly enthusiastic about the idea so I started off very slowly and stopped to look at wild flowers at the earliest opportunity. 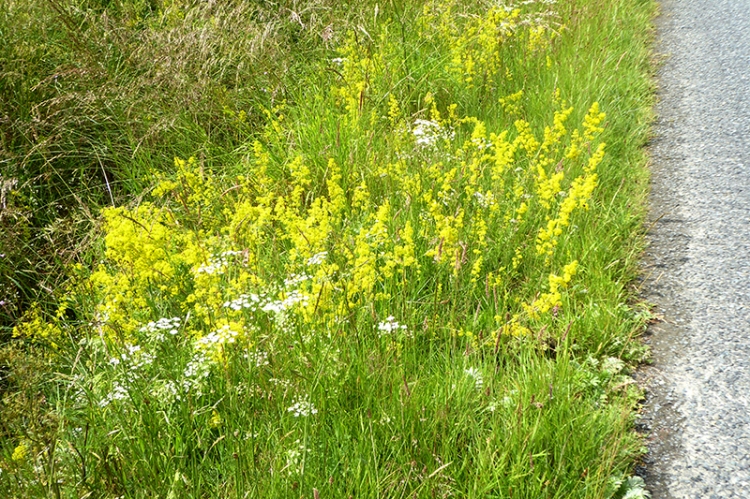 …as are the pink heads on the yarrow when they first come out. 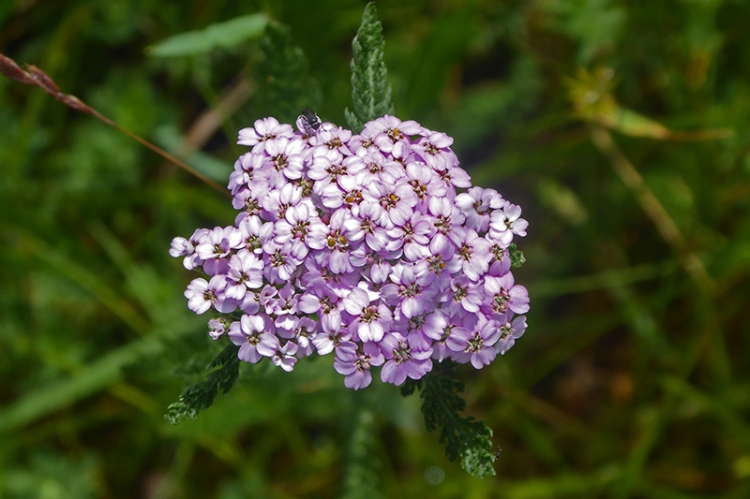 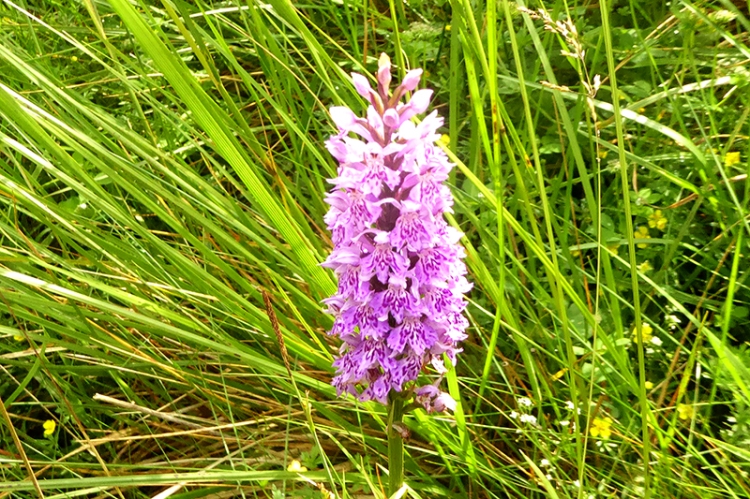 …but this little tormentil flower is so low to the ground that it might well escape the mower even if it does come. 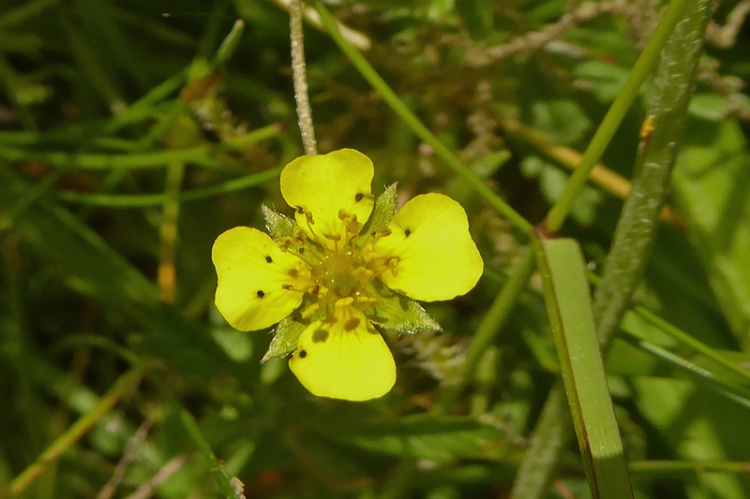 As I went on, the sun came out and in spite of having to pedal into the wind, my spirits lifted and I decided to take a diversion to investigate the road along which the turbines for the new windfarm at Solwaybank will arrive.

It was a narrow and poorly surfaced road but now it has been resurfaced and a extra bit of width has been added. 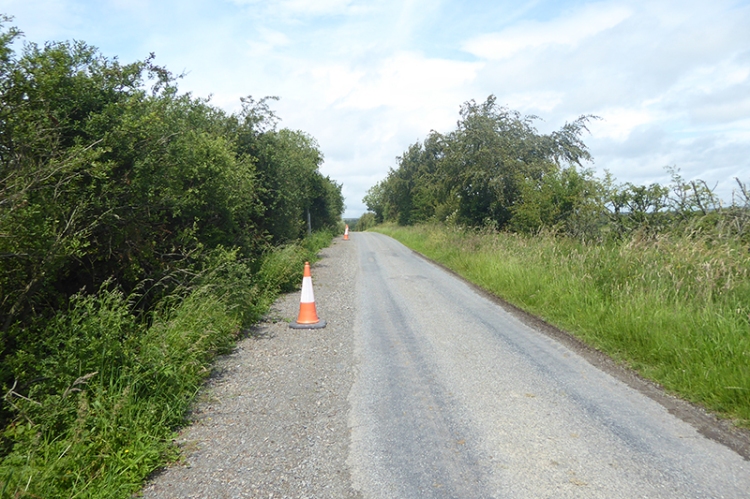 The arrival of the turbines has been delayed because of financial problems with the suppliers so the extra width has got many traffic cones on it to stop it getting worn out before the big lorries finally come.

It was a treat to cycle along a well surfaced back road but when the time came that a brand new windfarm road had been built across country…. 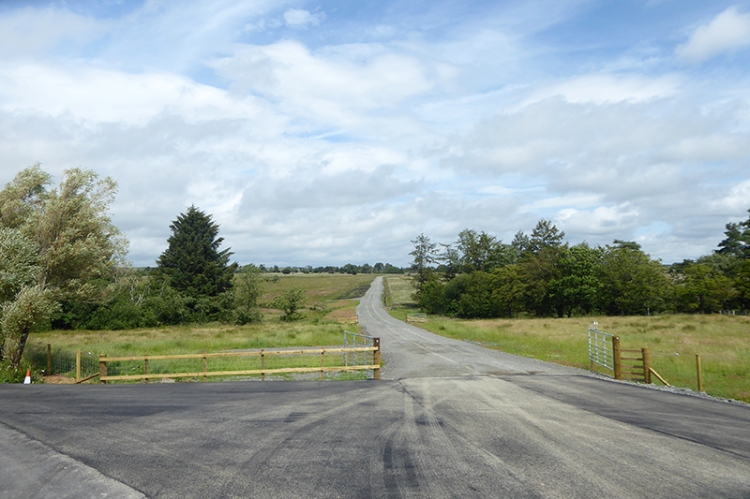 …I was left pedalling up the old narrow road. 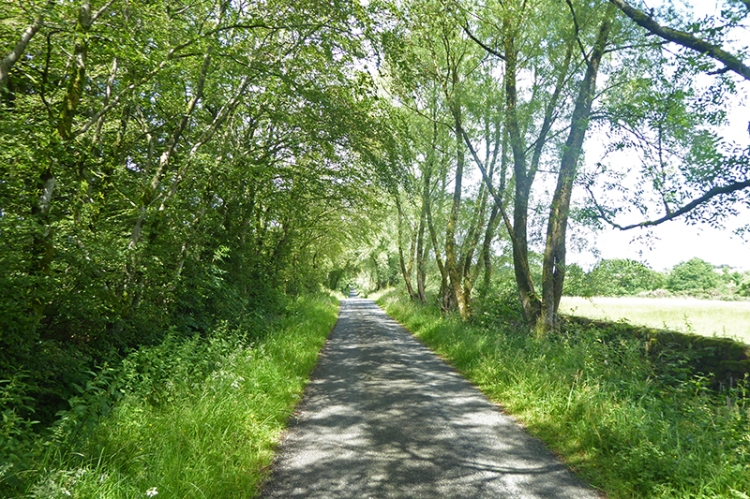 However, as it had been resurfaced not too long ago and was still in fair condition, and as there were foxgloves on the way… 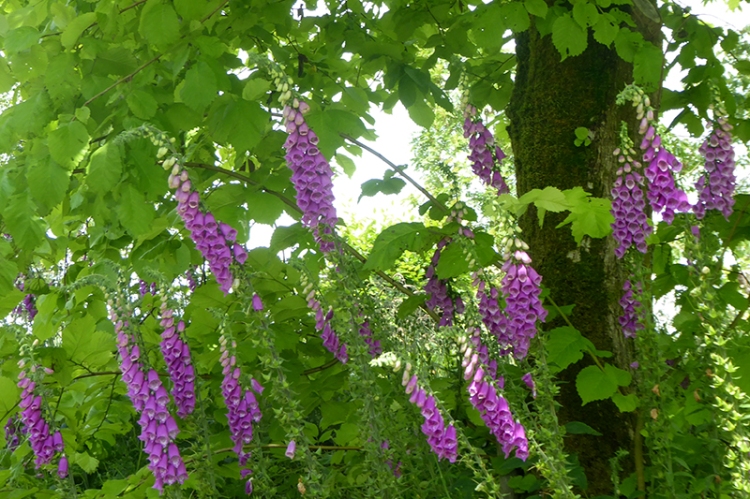 The new windfarm will be the fourth in our area and as I cycled along, I passed under a power line that was built for one of the previous sites.

The people who put the poles up must had a very good piece of string as they are in a really straight line from one corner to the next. 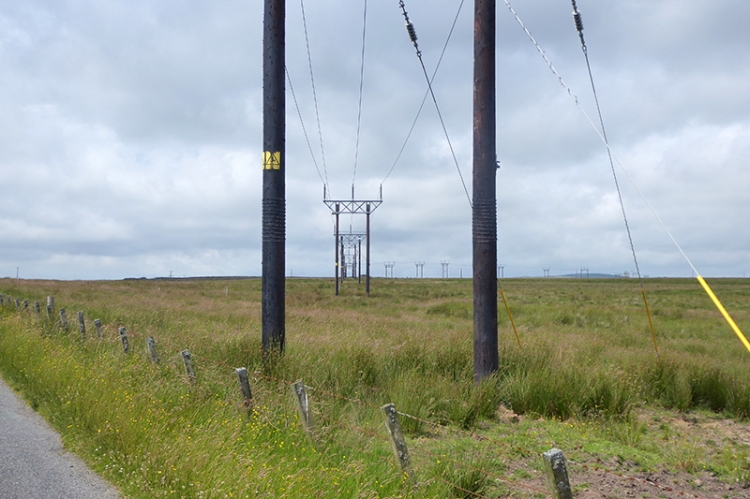 Once I had got to the end of this road, I turned for home and with the wind now behind me, I found that I was going too fast to think of stopping for every wild flower that I passed and it wasn’t until my legs started complaining as I got near the end of my ride, that I stopped again.

I was looking to admire a fine spread of knapweed on the old A7 near Hagg-on-Esk and I was lucky to find a hoverfly with same idea. 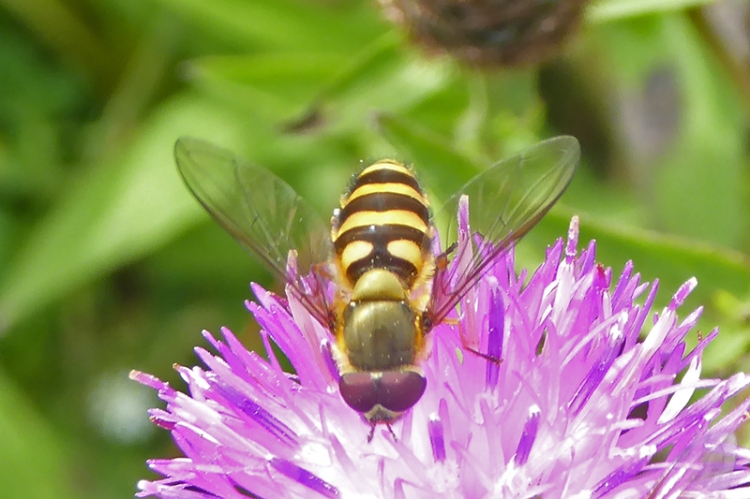 The knapweed and daisies are in good form along the road here, 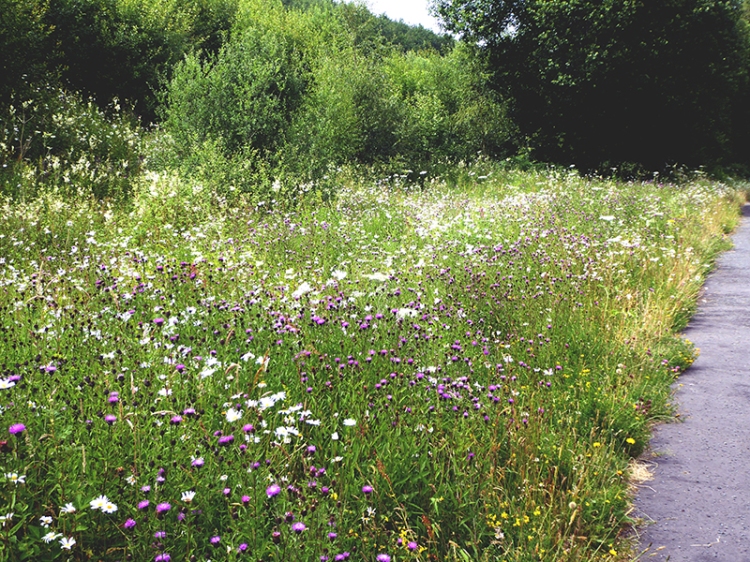 When I got back to Langholm after 36 miles, I was seized with decimal mania and cycled through the town and out of the other side for two miles. The verge cutters had been slaughtering wild flowers here. 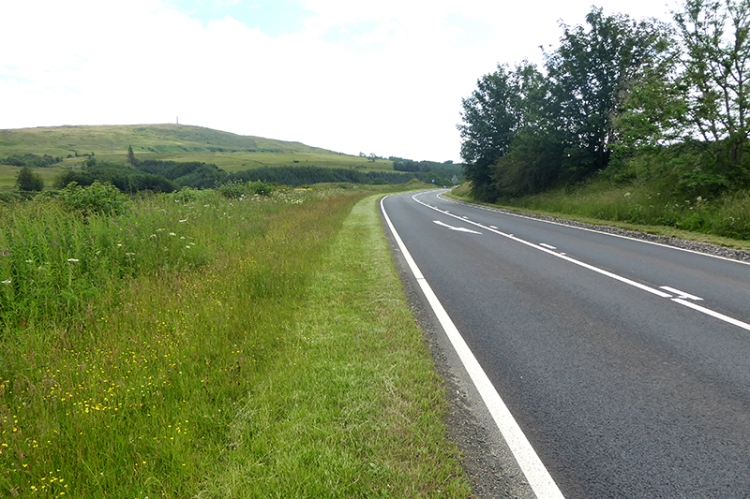 The extra four miles brought my trip up to 40 miles and my mileage for the first ten days of the month of July up to 200, the most that I have cycled in such a short spell this year.

If I stick to cycling, and don’t try to do any walking, my feet are not too bad and in recent days I have found myself feeling quite a bit happier about taking exercise. This is a tribute to the healing skills of Dr Velo.

I had enough energy left when I got home to get the mower out and mow the two lawns. We are going down to London again for a few days on family business tomorrow so they needed a cut before we went.

While I was out, I checked on the new fuchsia in the chimney pot. It is settling in well. 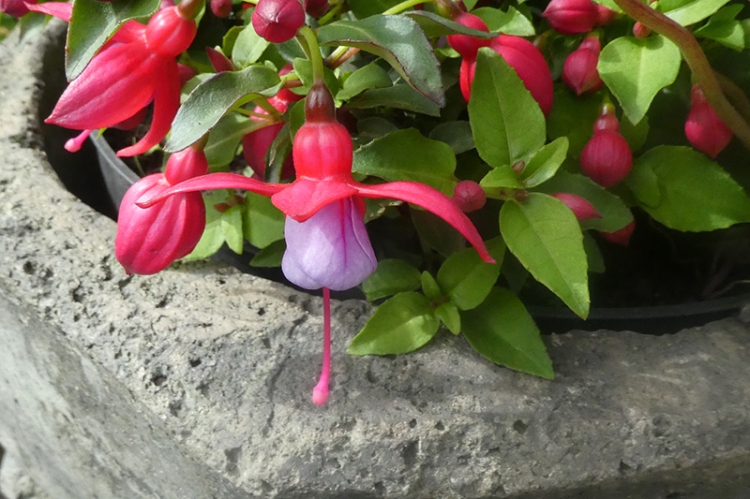 The hostas are bursting onto flower… 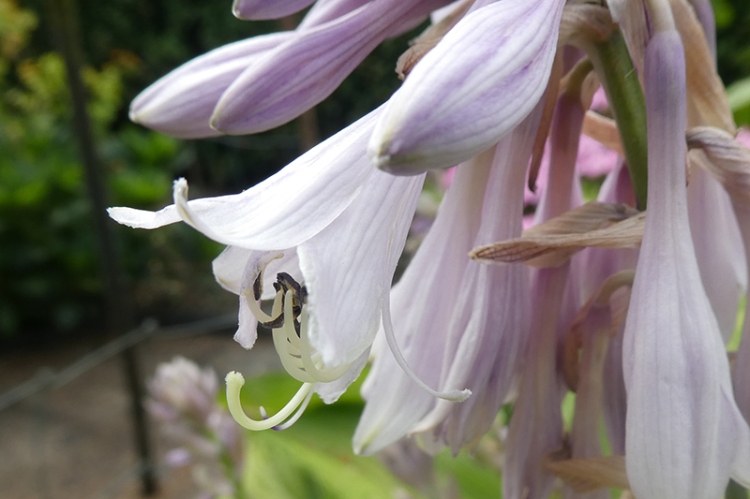 …but they can’t compare with the magnificence of our neighbour Liz’s filipendula. 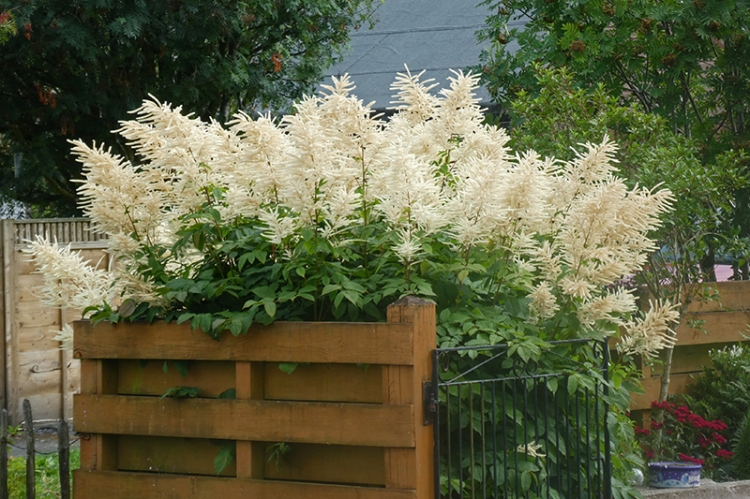 When I went in, I spent a little time checking on the birds.

A reader suggested that the collective term for our siskins should be ‘squabble of siskins’ but he pointed out that it has already been taken by seagulls. This is a pity as it really fits the feisty little things. 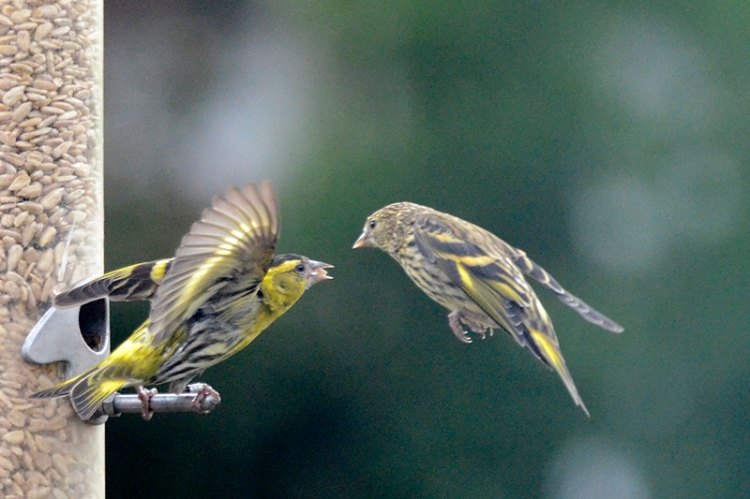 If they are not squabbling over the seed, they are kicking one another. 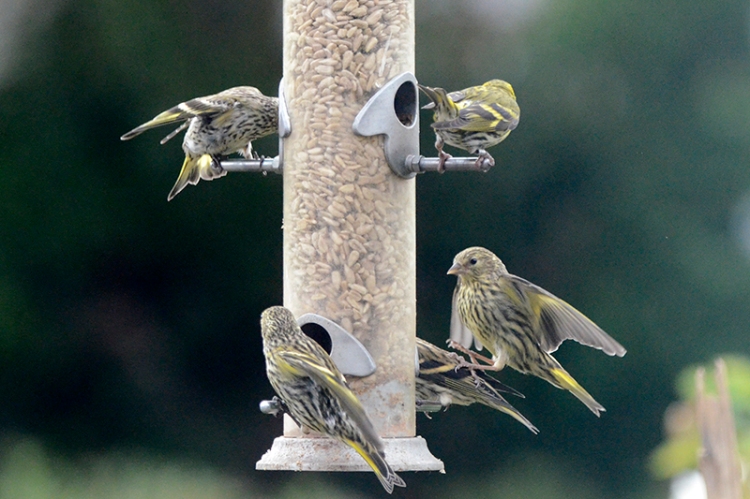 Some more sensible siskins prefer to nibble the nuts in peace. 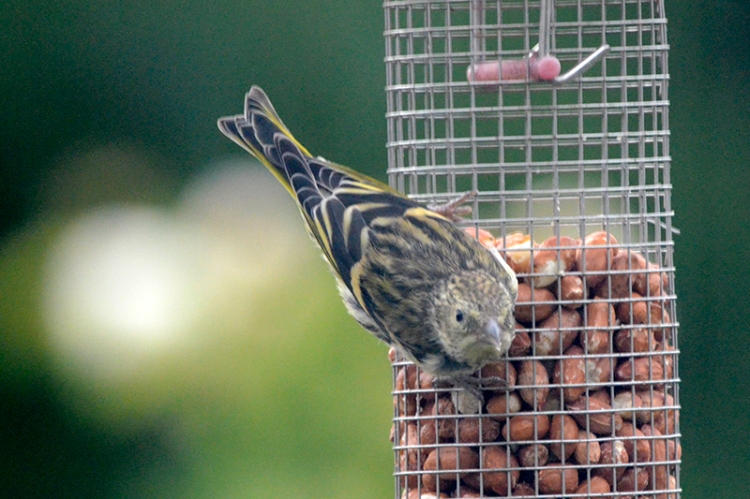 Watching the recording of today’s stage Tour de France once again provided an opportunity for some relaxing sofa testing in the evening.

With some potentially heavy rain forecast for tomorrow, we are keeping our fingers crossed that our transport all works smoothly for out journey south.

A goldfinch, leaving the siskins to fight it out among themselves, is the flying bird of the day. 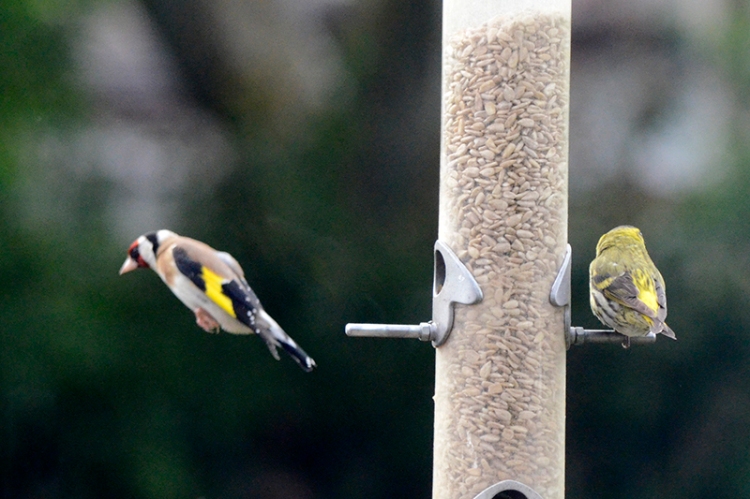