Today’s guest picture comes from Bruce who is in the north east of Scotland.  He had a warm and sunny day yesterday when he visited Haddo House, a Scottish stately home located near Tarves in Aberdeenshire.

We had a warm but far from sunny morning here as the rain made its presence felt.

I was happy to stay in out of the rain because I was expecting a call from an engineer who was coming at some time between eight and twelve to install smart meters in the house.  Life likes to play little pranks on unsuspecting old people so when the phone rang and I was expecting the engineer to answer, I was quite surprised to find it was the hospital.  I was even more surprised when after waiting three months for an appointment with the physio, they told me that they had had a cancellation and I could see the physio today.

Oh joy….but then, the appointment was for one o’clock and I couldn’t take it as, with Mrs Tootlepedal away in Edinburgh, I had to be present while the meters were being fitted and I couldn’t guarantee that it would be finished by one o’clock.  The charge for cancelling the meter fitting at short notice was £130.  Oh calamity….and then, the cream of the jest…. when the hospital had rung off, the engineer rang soon afterwards to say that he was on his way and in the end the job was finished before half past ten…but the appointment had gone.  How I laughed.

Still, Dropscone came round for coffee bringing with him a pile of his fine drop scones so life wasn’t all dust and ashes.

After Dropscone left (with added rhubarb), the rain continued and I put another week of the newspaper index into the Archive Group website.  Finally things dried up and after a light lunch, I went up to the Laverock Hide to fill the feeders in my capacity as a fill-in feeder filler for friends who were absent.

I took this shot of the hide with its slightly tousled toupee and its eyes closed as I walked back up to it after filling the feeders.

I went in, opened a window and sat down but I might as well have left the window shut for all the birds that I saw.

A blackbird was slipping and sliding about… 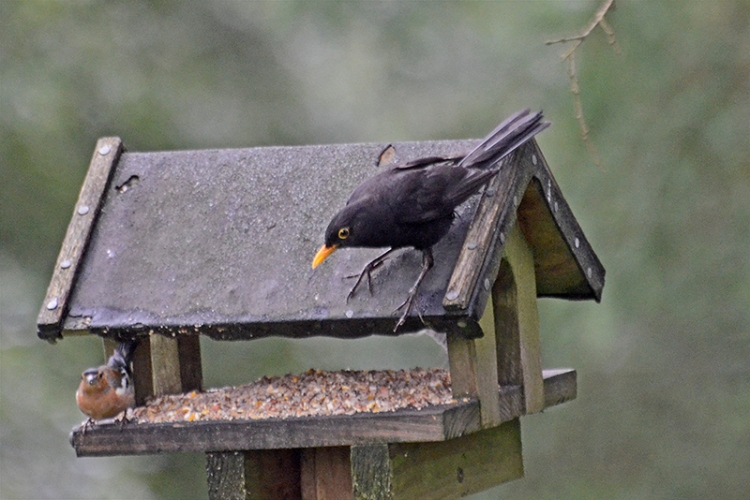 …and a chaffinch perched for a moment in front of me… 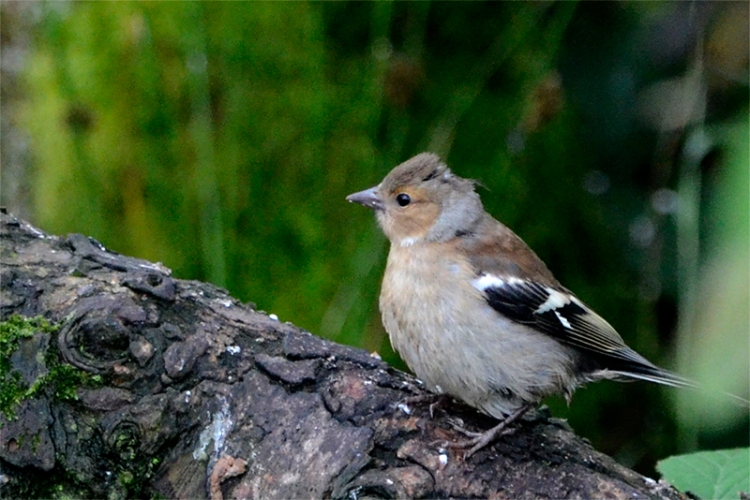 …but that was all the excitement for the day.

A beautiful orchid outside the hide cheered me up as I left. 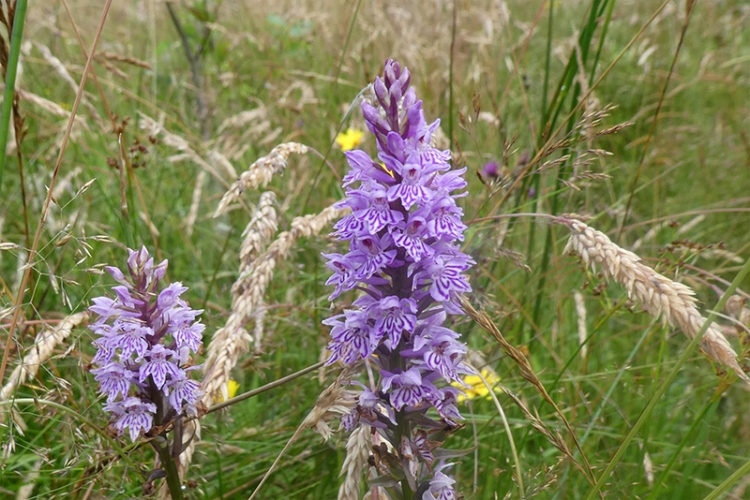 I walked round the garden when I got home, doing a bit of dead heading as I went and enjoying some raindrops caught on a fine web…

…and a very soggy bee hard at work… 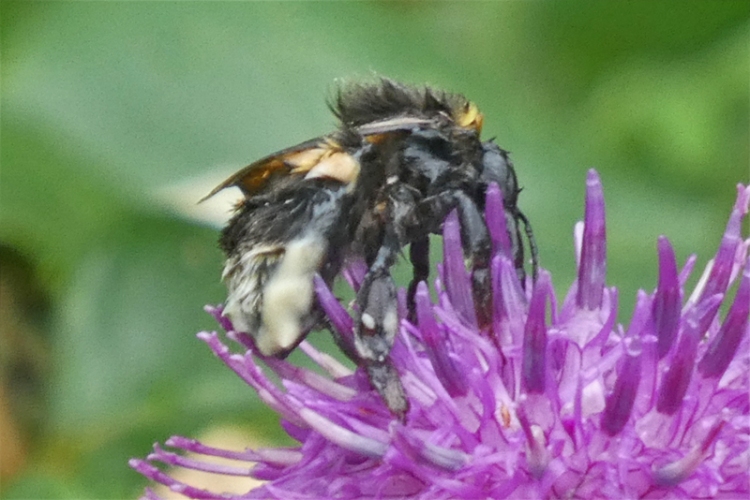 …and noting that the berries on the tropaeolum are turning blue. 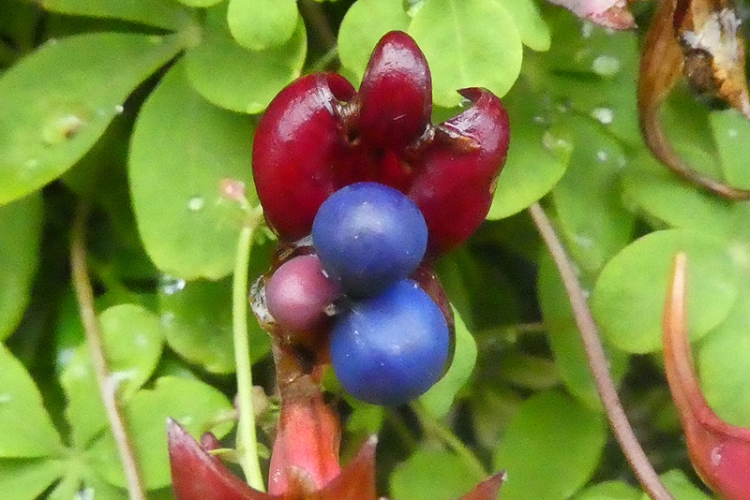 It started to rain again, so I went in and watched our own birds.

…while a sparrow just concentrated hard on nailing the landing. 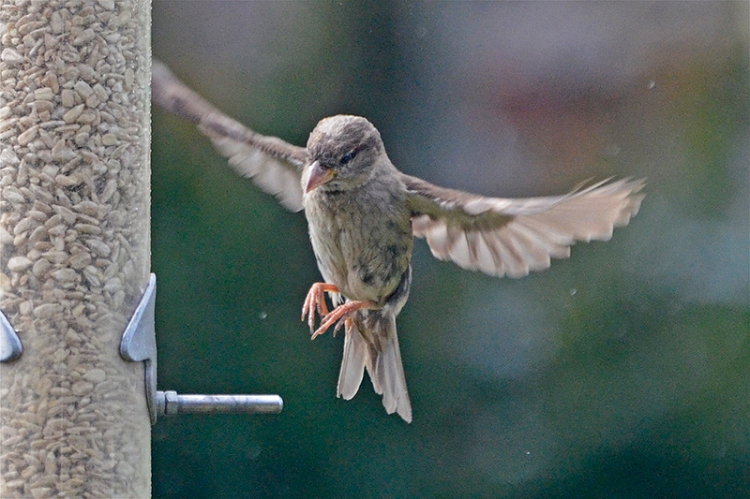 …while I went out into the garden again.

…and the Charles Ross apples are coming on well. 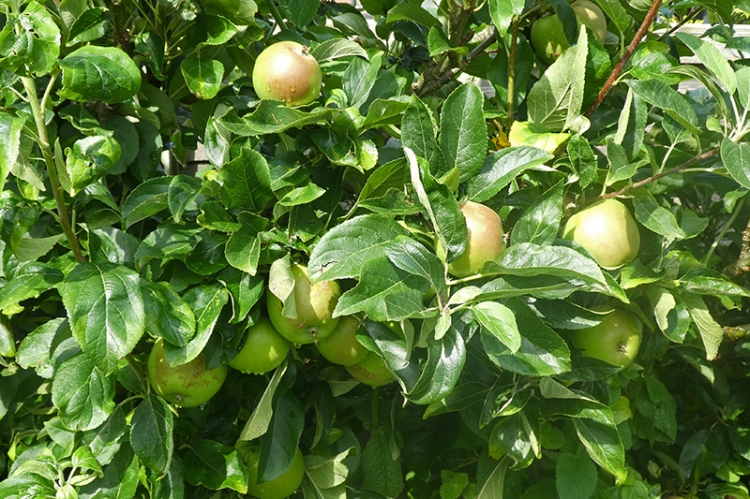 When the sun came out, I went on a butterfly hunt and spotted a painted lady straight away.

If you want to know what a painted lady looks like from straight behind, this is it. 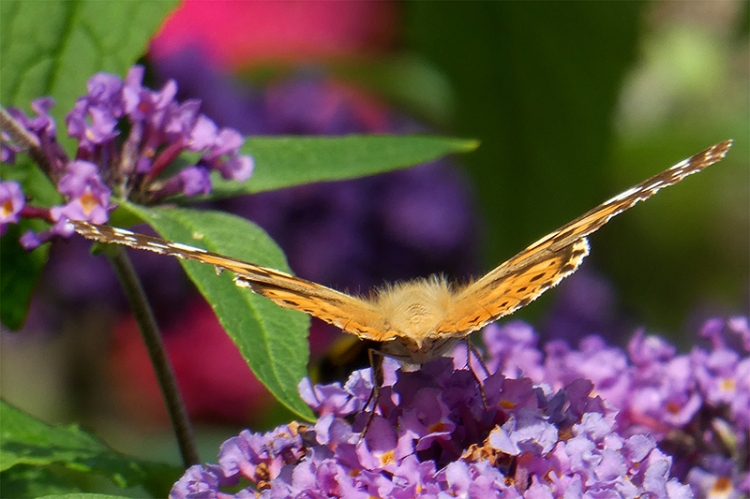 Later on, I had another look and saw a couple more.

I even saw a peacock butterfly as well. 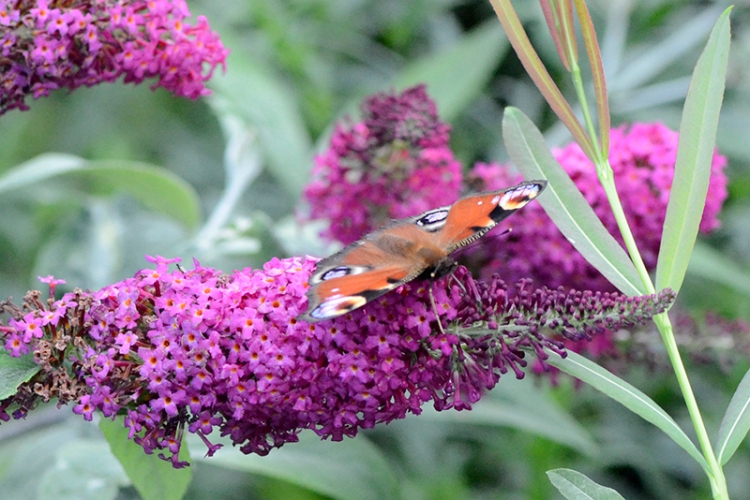 Then it was time for the main business of the day, a drive to Lockerbie Station to pick Mrs Tootlepedal up from the Edinburgh train.  My timing was perfect and I walked onto the platform as the train drew in.  Mrs Tootlepedal alighted and we drove home.

She had been watching Matilda dance in a competition in Musselburgh and reported that Matilda had done well.

When we got back, she noticed that the acidanthera which she is growing in pots have also done well and the first flower on one of them had come out while she had been away.  The internet tells me that this delightful flower is also called the Abyssinian gladiolus so it has come a long way. 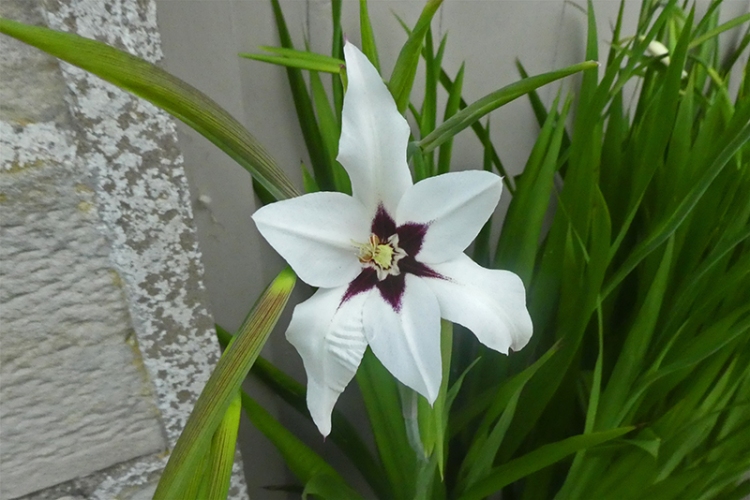 Our new smart meters seem smart enough to let our electricity and gas keep working so that is a relief.  The little gadget that comes with the meters to let us monitor our consumption in real time doesn’t work yet so they are not that smart.

The flying bird of the day is a siskin threading its way through the rain to the feeder.

23 thoughts on “Out smarted”