Today’s guest picture comes from Dropscone’s Highland holiday.  He went to Fraserburgh and saw not one but two lighthouses.

It was another tedious morning with lots of rain showers and just enough gaps between them to make you think that they might be stopping….but they didn’t.

After killing time to a background of Beatles music on the pop up radio channel, I went out in one of the gaps to get my new insoles which had been delivered to the Thomas Hope Hospital up in the town.

The rain stopped for long enough to get me up to the town, but having got me there, it rained on me all the way home.  How I laughed.

The birds didn’t think that it was funny either.

A starling just couldn’t get settled at all.

I fried some sardines and had them on toast for my lunch and then wasted some more time.

I looked out of the back window and saw that the dam had risen a bit, so I thought that I ought to go and check on how the new sluice gate at Pool Corner was holding up.  It was raining, but it wasn’t windy and it was fairly warm so I took my brolly and set off

There was plenty of water going over the caul but the wall and sluice looked solid enough so I was reassured.

Since I was out and about with a brolly and I had my new insoles in my shoes, I kept walking.  There was plenty of water coming down the Becks Burn…

…but I thought that I would be safe enough to cross the little wooden bridge across the burn  higher up and took the road up the hill.

Looking back down at the Auld Stane Brig, the scene looked autumnal.

I had hoped to see some fungus on my way, but some animal had got to this one before me. 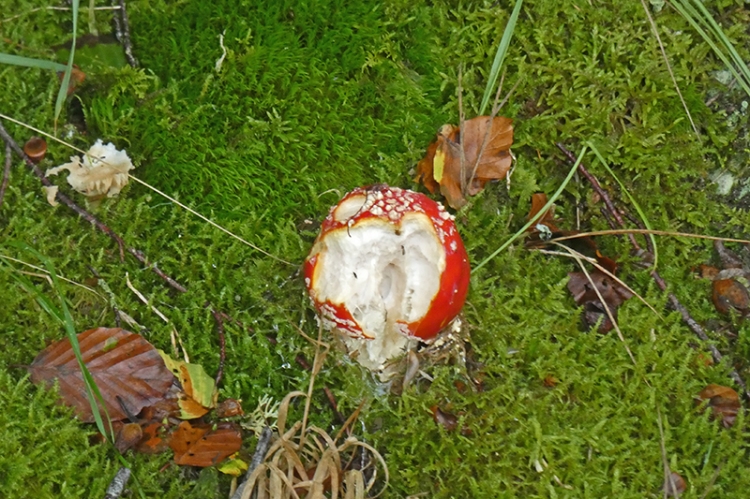 By the time that I got to the bridge across the burn, the rain had stopped… 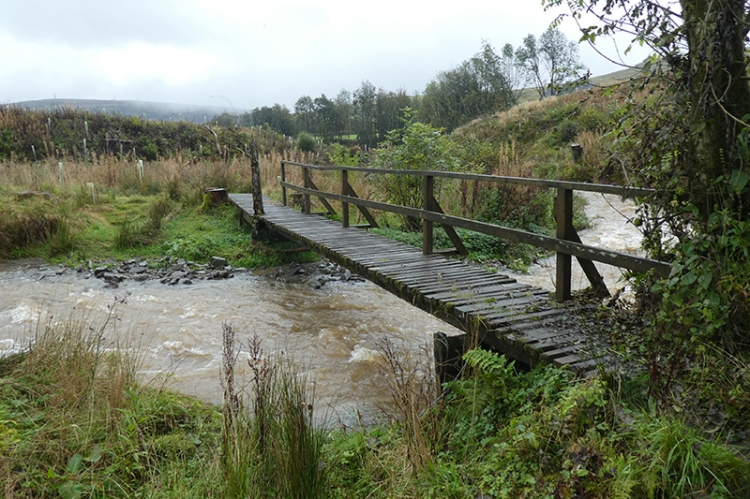 …but not long after I had crossed it, the rain started again, first with a little pitter patter and then with some serious intent and by the time that I got home, it was hammering down.

I settled down indoors to watch some cycling but after a while, I looked up and saw that the day had brightened a bit and the rain had stopped again.  I felt that I ought to give my new insoles a good work out, so I put them in different pair of  shoes and set off to see how far I could go before it started to rain again.

I had a quick tour round the  garden before I left just to show that the rain hadn’t flattened everything.

It was good to see that there are still buds ready to open.

One thing that the rain had done was to knock a few walnuts off our walnut tree.

I took the walnuts inside and while I was there, I spotted an old acquaintance through the window. 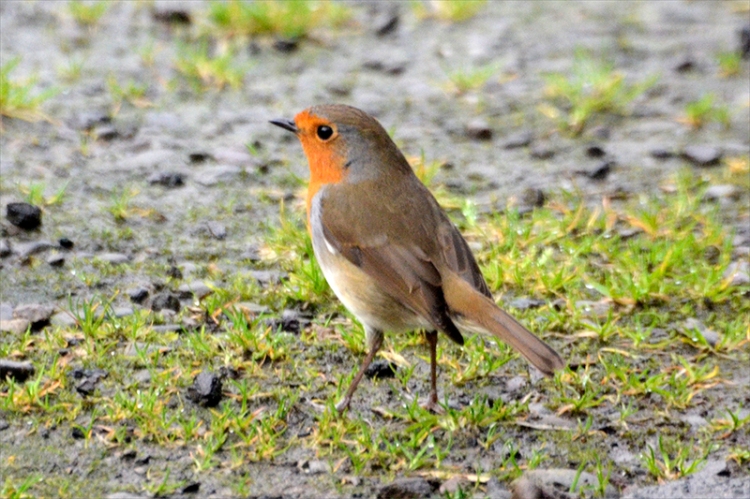 Leaving the robin to entertain itself, I walked down to the river.  It was fairly full but far from being in flood.

I walked across the suspension bridge and up the road where I met another old friend on the Kilngreen.  He was surrounded by ducks.

I walked round the new path on the Castleholm.  An oak tree had a good collection of interesting things to show.

…and even after all the rain, an umbellifer was providing food for a hoverfly. 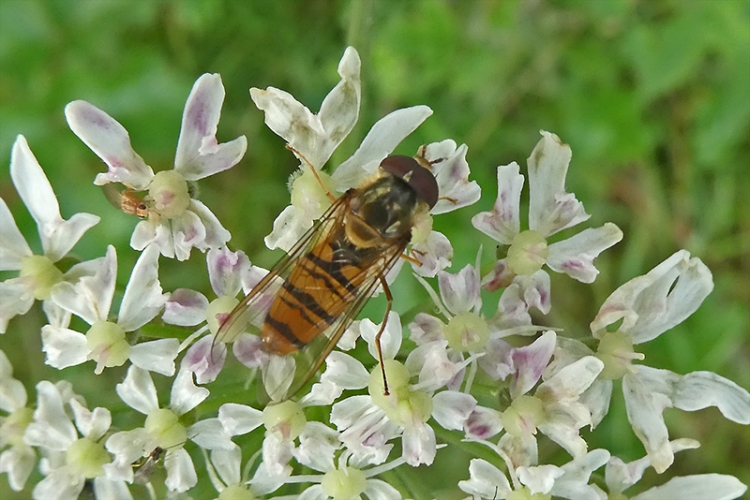 And then, out of the blue, the sun came out.

It did point up how much some trees are changing already… 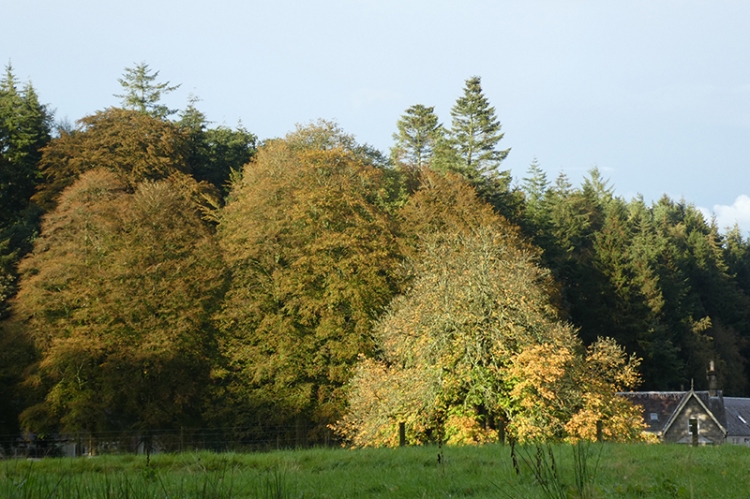 …but it cheered up my walk a lot.

The Langholm Agricultural Show is on tomorrow on the Castleholm and they must have been very worried by how much rain that there has been this week.  The news is that the show will go ahead regardless of the weather tomorrow and the stylish tents were positively sparkling in the welcome sunshine this evening.

Once again, the sun picked out the turning leaves in the trees behind the tents. 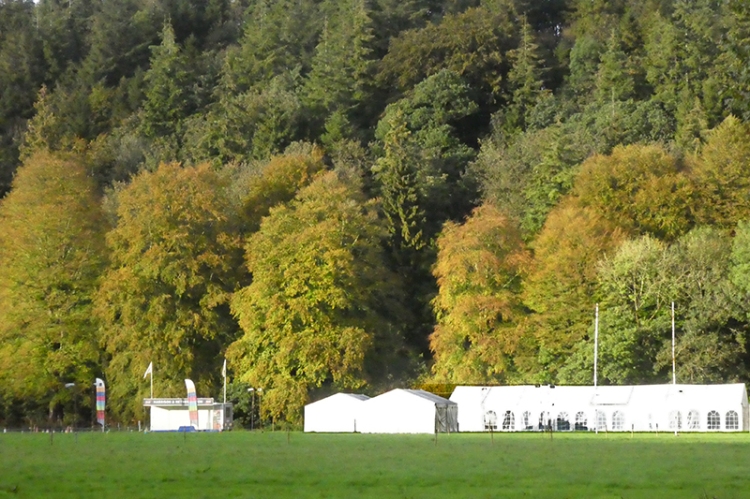 I didn’t want to overdo the new insole trial so I stuck to the short route home and got back without being rained on this time.

I was welcomed in by that spider.

Looking at the very latest forecast, it seems that the Agricultural show could have a mostly sunny day tomorrow.  If that turns out to be true, I might put my new insoles into my wellies and pay a visit.  It will probably be quite muddy.

A starling is the flying bird of the day again.  They have very elegant wings I think.