Today’s guest picture, like yesterday’s, comes from Canada but shows a different view of Thanksgiving Day there.  Langholm exile Joyce sent me this view from her window in Ontario.

We had an altogether better day today here as far as the weather went, with not even a hint of a raindrop about.  My plan was to make the best if the day by leaping up early and bicycling madly all day.

In real life, I got up rather late, had a leisurely breakfast and did the crossword and only then felt strong enough to get my bike out. For some reason, I am feeling a bit tired in general at the moment and far from bicycling madly about, I kept to a very steady speed indeed, especially when it came to going up hills.

And my route today had plenty of hills compared with my usual flattish outings.  I headed north out of town and aimed for the county boundary twenty miles away at the top of a hill.

There were plenty of excuses to stop along the way to take pictures.

I liked these poplars….

…and there was an amazing crop of crab apples on a tree beside the road.

I then cycled across the bridge over the Black Esk and followed the White Esk to its source. 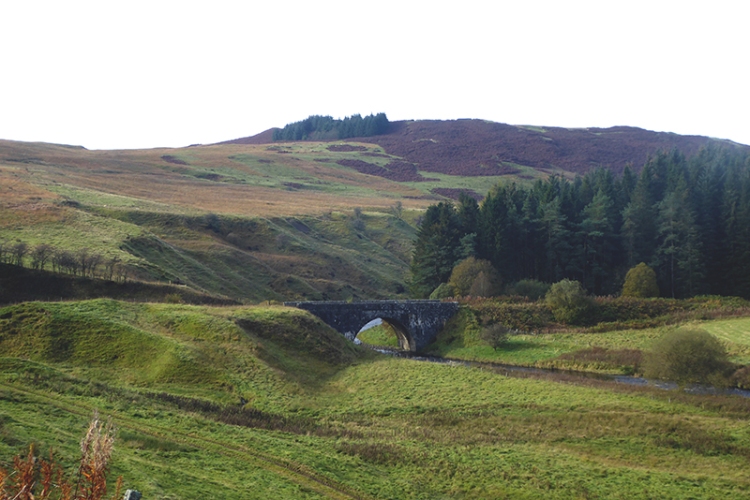 The road to Eskdalemuir up the west bank of the White Esk is one of my favourites.  It is quiet, well surfaced and has gentle gradients.

My route took me through the village at Eskdalemuir and past the Tibetan monastery, where the stupa was sparkling in the sunshine.

The road climbs steadily to just over 1000 feet… 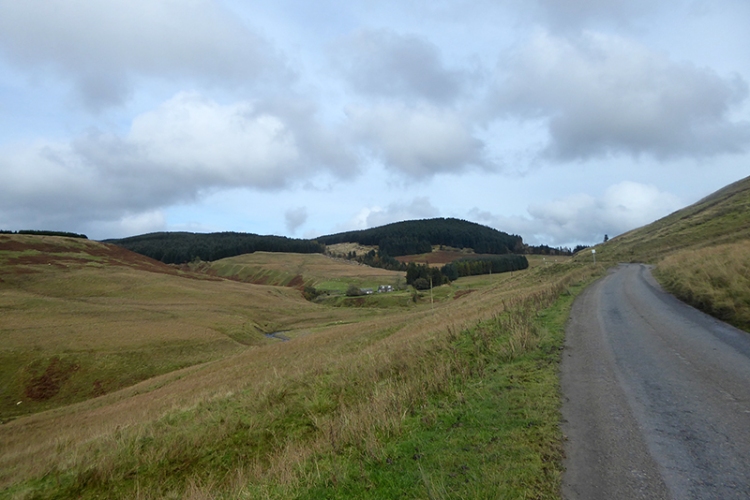 …so my bike was happy to have a rest while I ate a tuna roll at the county boundary. 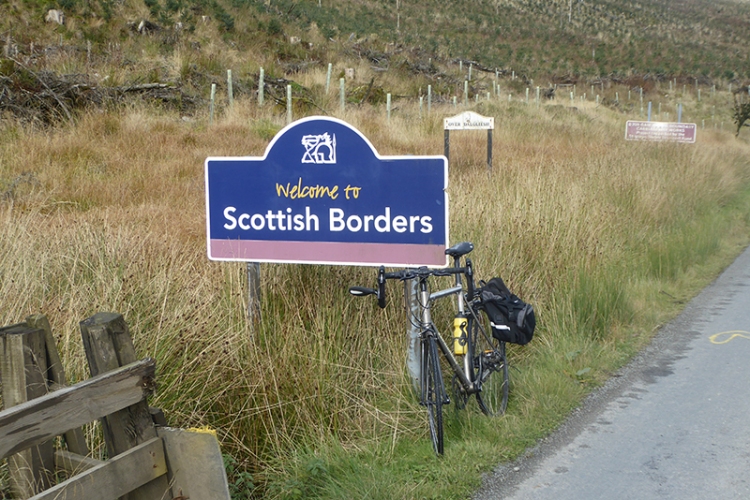 I ignored the charms of the Scottish Borders and after a ten minute break, I pedalled back home through Dumfries and Galloway.

I took the same route home as I had taken on the way out as the alternative route down the east bank of the river has a very steep hill which my knees were not anxious to face,

On one of my stops for refreshment and rest, I looked back up the Esk valley.  It appeared to be very benign in the gentle sunshine but it can be a harsh place in the winter.

Although there was quite a bit of cloud about, it was so thin that the sun shone through it it all day.

My route took me along the Eskdale Prehistoric Trail and I stopped at one of the sites while I ate a banana.  There are information boards at the sites and some of the boards are more informative than others.

This one is unusually honest. 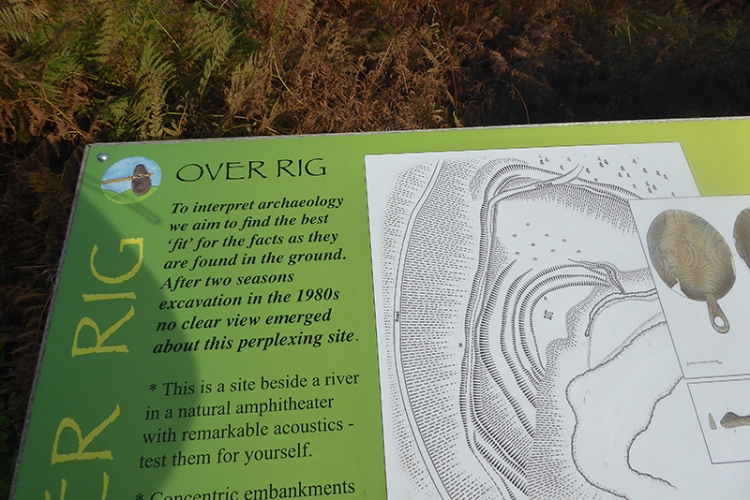 This is the natural amphitheatre.  One of these days I am going down the path to try out the acoustics.

It has been a very good year for cones and these trees along the Esk at Bailliehill were dripping with them.

There was a little autumn colour here and there along the route and this tree beside the graveyard at Bentpath was the best. 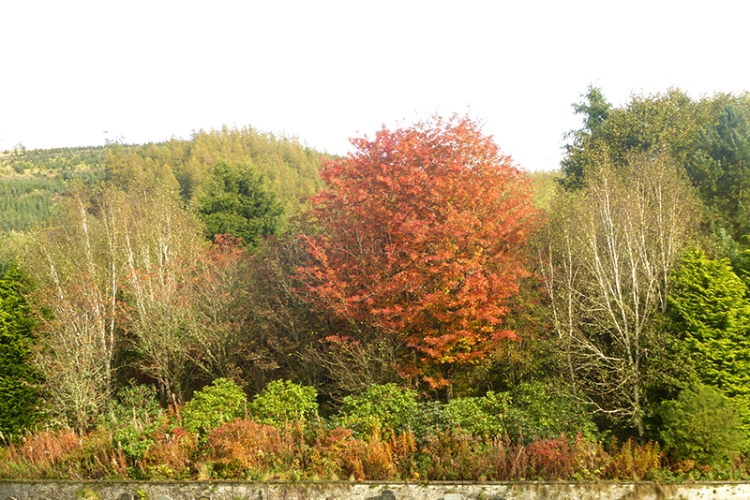 I walked down to the river at the Bentpath Bridge but there are so many trees in front of the bridge that I couldn’t get a shot of the whole bridge and this glimpse through one of the arches was the best that I could do.

I pottered on gently and got home after 45 miles at very restful 11 mph.   As I had climbed over 2000 ft on my way, I was quite happy to have got home at all.

Mrs Tootlepedal had organised an exhibition of her Embroiderers’ Group work in the Welcome to Langholm office in the morning, and she had done some good gardening in the afternoon, so we had both had a full day.

After a cup of tea, I wandered round the garden.   Some plants were complaining that I had left them out of my review yesterday.

The most surprising is this hosta.  It has sent up flowering stems from some very brown leaves.

The Icelandic poppies are still flowering in spite of poor dead heading from me.

And the lamiums haven’t stopped at all since March. 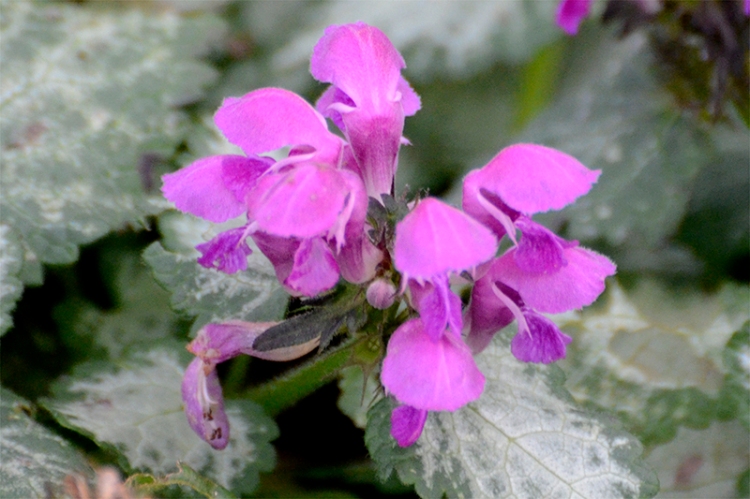 Another little rose has taken advantage of the continuing warmth.

The fuchsia by the back gate has produced a large crop of berries.  Mrs Tootlepedal thinks that they might be edible but we are not going to try them.

My flute pupil Luke came and we put in some heavy work on developing his counting skills.  It is obviously an area where I need to hone my teaching skills!

The flying bird of the day is a blackbird having a rest before a big night out on the tiles.

23 thoughts on “Pushing the boundary”