Today’s guest picture comes from Mary Jo.  She escaped just in time from the Manitoba snow storm and arrived in London to find that it was raining a lot instead.  In the end the rain stopped for long enough for her to visit Kew Gardens where she encountered these  splendidly prickly plants. 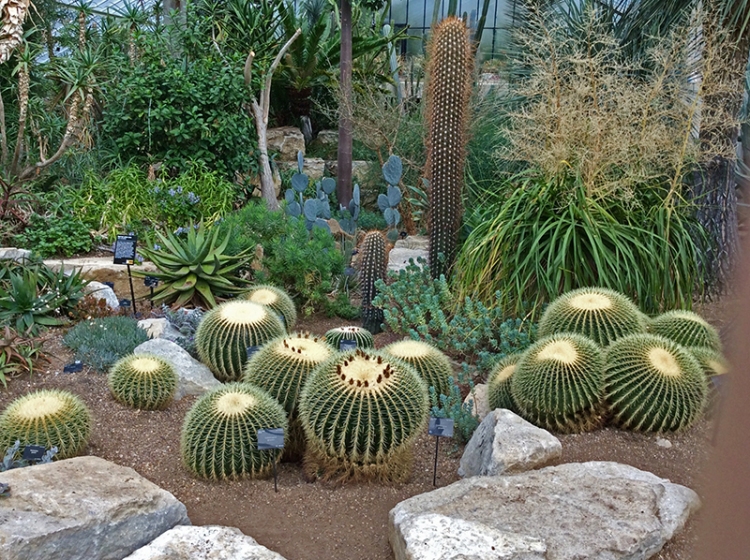 After our short spell of better weather, the weather gods had decided to bring us back down to earth today and it was raining heavily when we got up.   Mrs Tootlepedal bravely cycled off in the rain on business after breakfast while I did the sensible thing and stayed at home and arranged to have coffee with Sandy and Dropscone.

Dropscone brought his usual supply of good scones and we sconed, sipped and chatted away as the rain fell.

Mrs Tootlepedal came back from the town and we squeezed another cup from the pot for her.

After coffee, I had time to do the crossword and start a tarte tatin off before we had lunch,  After lunch, the rain finally eased off and I was able to get out into the garden.

There were birds posing for me all over the place.

The rather scruffy male blackbird is looking better… 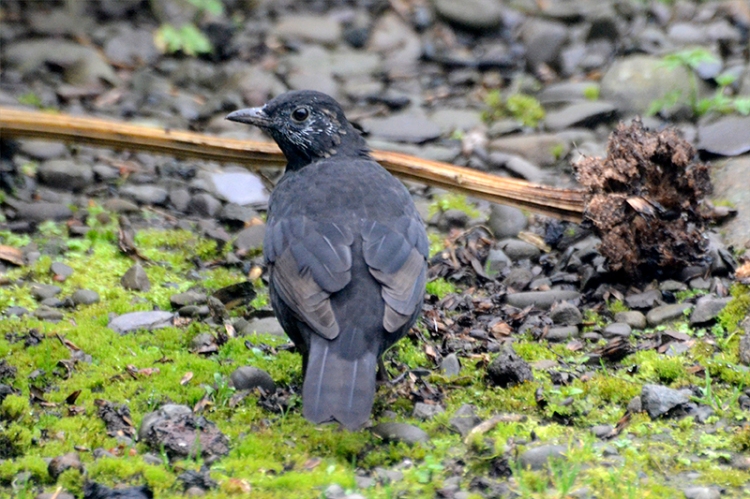 …even though the female doesn’t think much of him yet.

The sparrows often have a bath in the dam behind the house and then, like this one, flit up up onto the lilac to have a flutter and a shoogle to get dry again.

A bird skulked in the shadows on the fence… 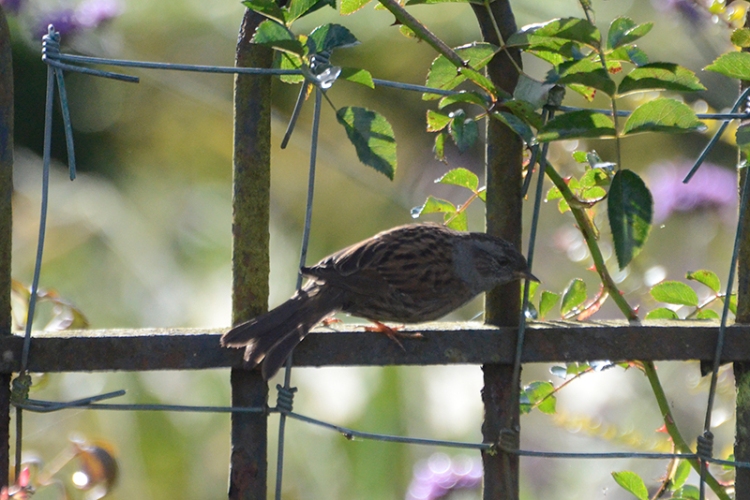 …before flying up into the rowan tree to reveal that it was a dunnock or hedge sparrow.  It is obviously a bit slow in learning the difference between a fence, a tree and a hedge.

As you can see, the sun had come out by this time, so I took a quick look at some clematis…

…and a fuchsia which is coming out ridiculously late for the first time this year, together with a dahlia which is hanging on very well after looking as though it was well past it. 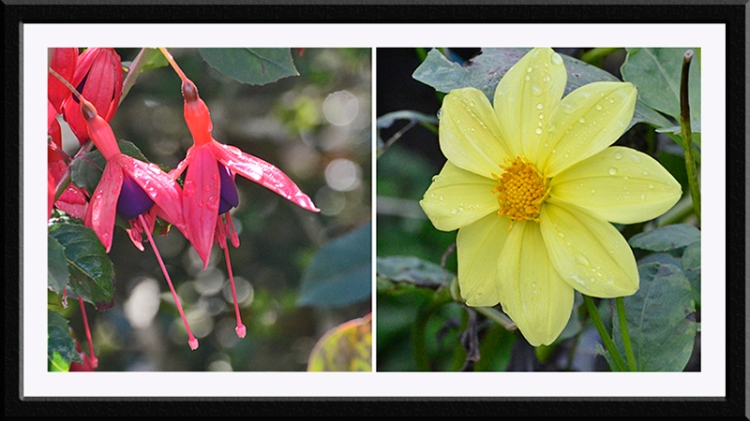 Then, as it was too good a day to miss by now, I got my bike out and checked to see how my legs were feeling after two busy days.

It turned out that they were feeling fine and they carried me round my customary twenty mile Canonbie circuit slowly but without complaining.

There is a spot along the way where the grass always turns golden brown at this time of year. 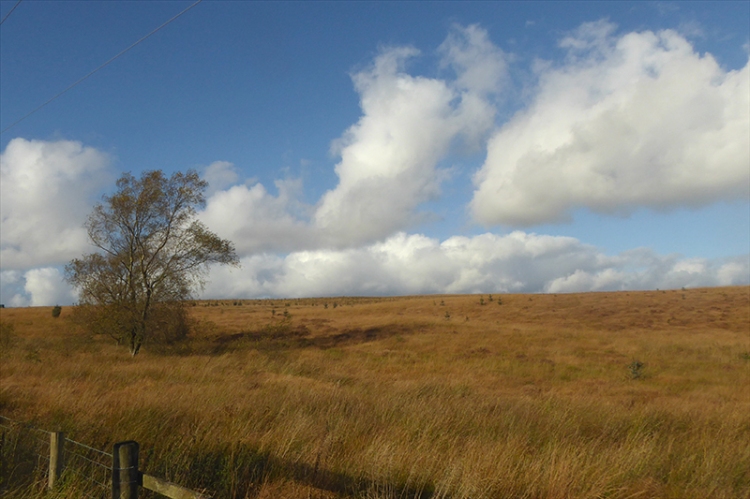 The sun is getting low in the sky all day now and the trees on the far bank were casting interesting shadows on the old distillery building as I crossed Skippers Bridge.

When I got home, I turned out the tarte tatin and while Mrs Tootlepedal made a pot of tea, I cut a couple of slices of the tarte to go with it.  I added some ice cream to my slice and in my view, it would be hard to find a better after-ride refreshment.

I was so refreshed indeed that after I had had a shower, I went out for a short walk.  I was motivated partly by the tarte, partly by the lovely evening light and mostly by the fact that my physio has told me to walk more.

It is not long until the clocks go back so evening walks at this time of day will disappear for some months so I was pleased to able to enjoy such a beautiful light today.

The shadows were falling fast but I had time to enjoy some gentle autumn colour on my way.  The pictures speak for themselves, I think. 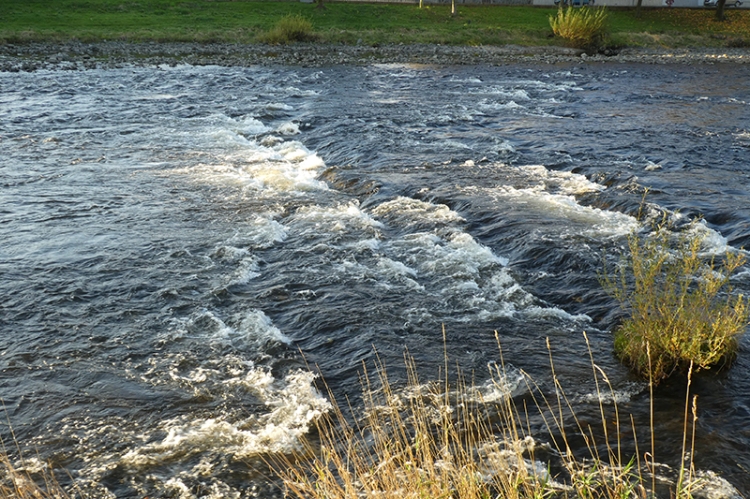 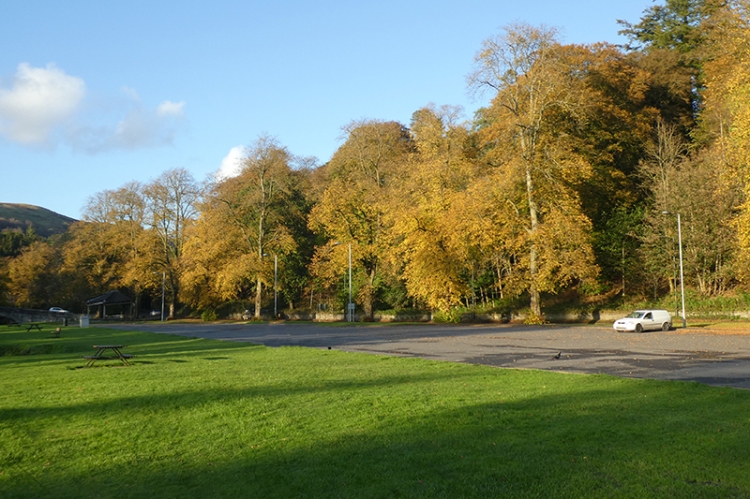 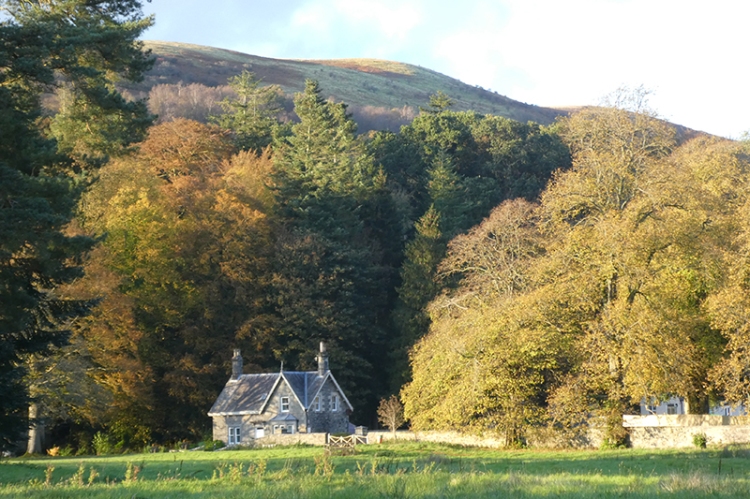 By the time that I had crossed two bridges and was approaching the third, the sun was ready to sink behind the hill and the shadows were lengthening…

I swept  a lot of walnut leaves off the front lawn when I got home.

We had courgette fritters for tea and then I went to sing with the Langholm choir.  Because of some illness going round, we had a select turnout, but we had a most enjoyable sing all the same.

As the sun went down on my walk in the afternoon, it began to feel a little chilly and I was wondering if we would have a frost tonight.  However, it was still quite warm when I walked home from the choir and when I looked at our thermometer a moment ago, it said that it is 9 degrees C.  The forecast claims that it won’t get lower than 5 degrees overnight.  We have been very lucky to have kept our flowers for so long and it looks as thought they may still be there tomorrow.

No flying bird of the day today but I was happy to see a starling back perching on the holly tree again.