Today’s guest picture is another from Venetia’s canal walk with my sister Mary.  I like a bridge with legs. 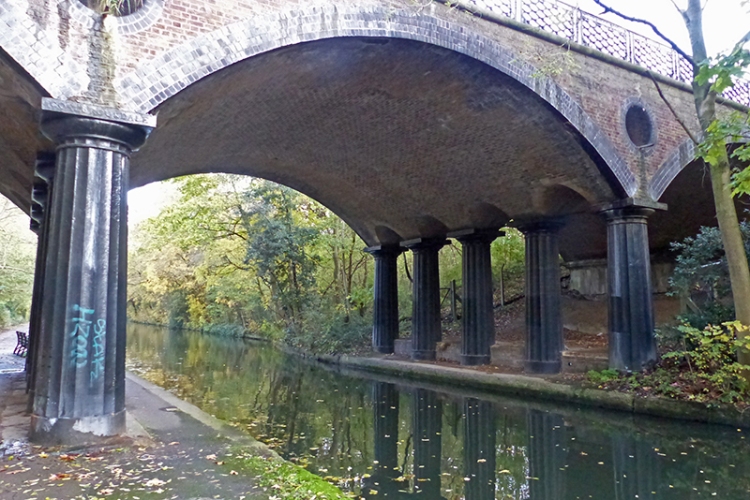 After a chilly night, we had a chilly morning followed by a chilly afternoon.  Sandy, who dropped in for a coffee told me that his thermometer showed an overnight low of -7°C which is unusually cold for November for us. Indeed, we have had some mild winters lately so this came as a bit of a shock to us.

The temperature hardly crept above zero all day so I was happy when Dropscone also dropped in for a coffee as it was far too cold to go out for a bicycle ride.

In the end  though, I had to stop drinking coffee and lend a hand about the house as we are expecting a visitor tomorrow.

I did find time to check on the birds, but the cold weather had affected them too and there were not many about.

I got a fleeting glimpse of a chaffinch… 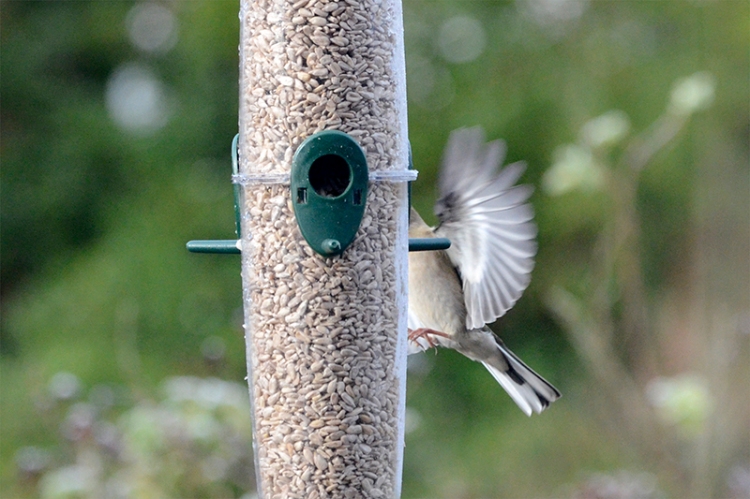 …and after a while, a goldfinch appeared.  The reflection in  the window made it look a bit as though it was dropping down a glass tube. 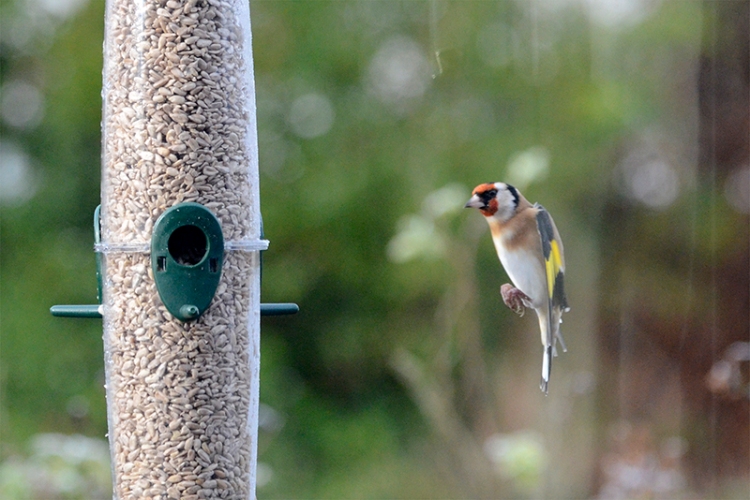 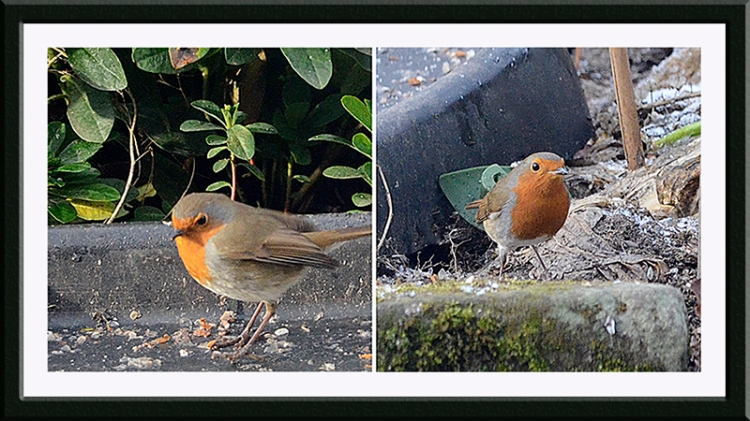 …but in general there was not a lot to look at, so I made some lentil soup for lunch instead.

After lunch, I went for a walk.  The skies were rather leaden by this time, but there was hardly a breath of wind and it was not icy underfoot, so it was pleasant enough for a stroll, especially as I was well wrapped up.

I checked the ice crystals on a sedum in the garden… 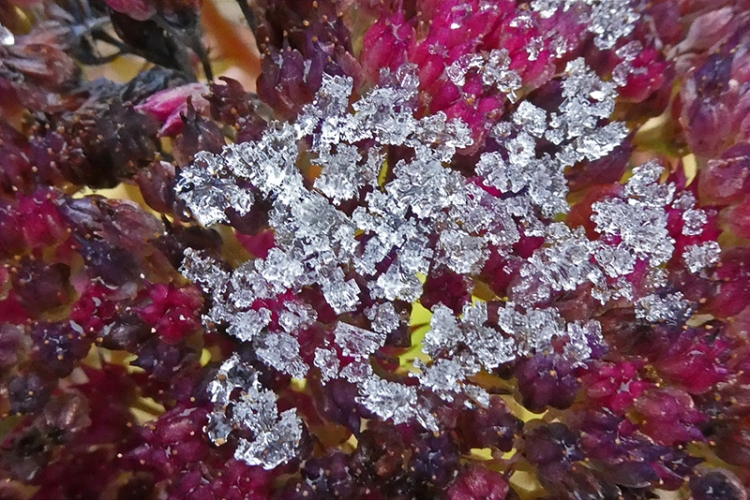 …and saluted a hardy perennial wallflower before I left. 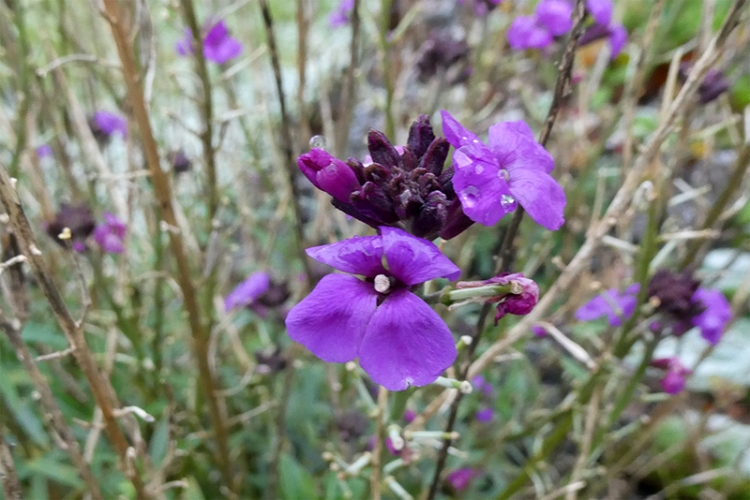 The larches are rapidly going  over and only the needles at the very tops of the trees are left to give a little late colour. 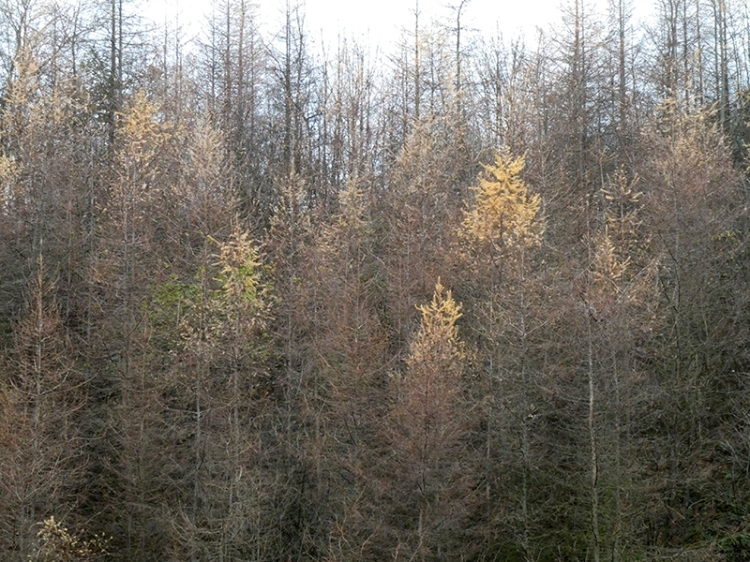 There was more colour on this tree growing out of a memorial in the Wauchope graveyard.  It is doing severe damage to its host. 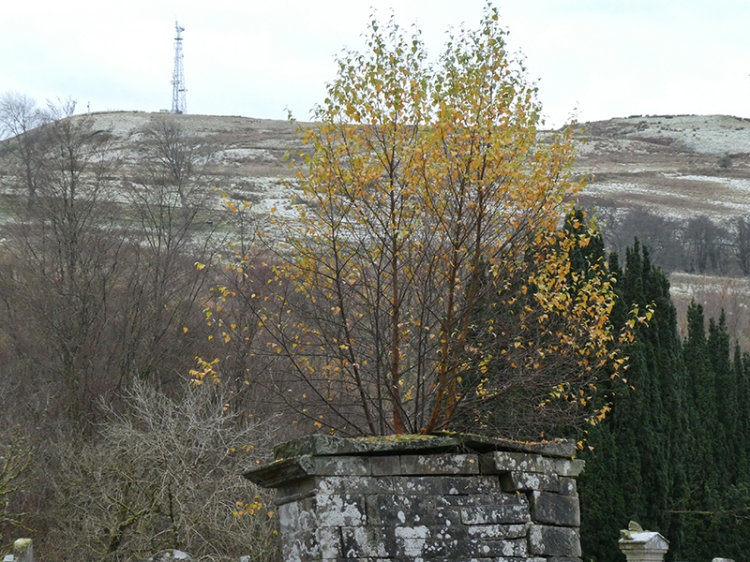 I had a look at my favourite lichen garden on the fence post beside the Auld Stane Brig.  The pixie cups had been bejewelled…. 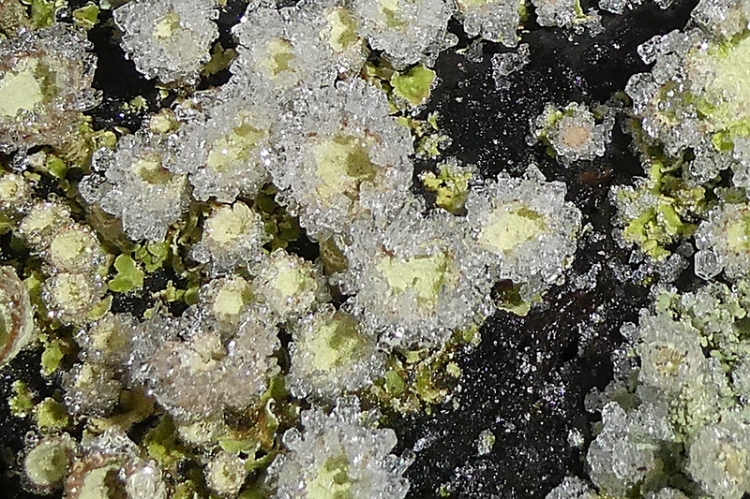 …while other lichen on the same post was unaffected by ice. 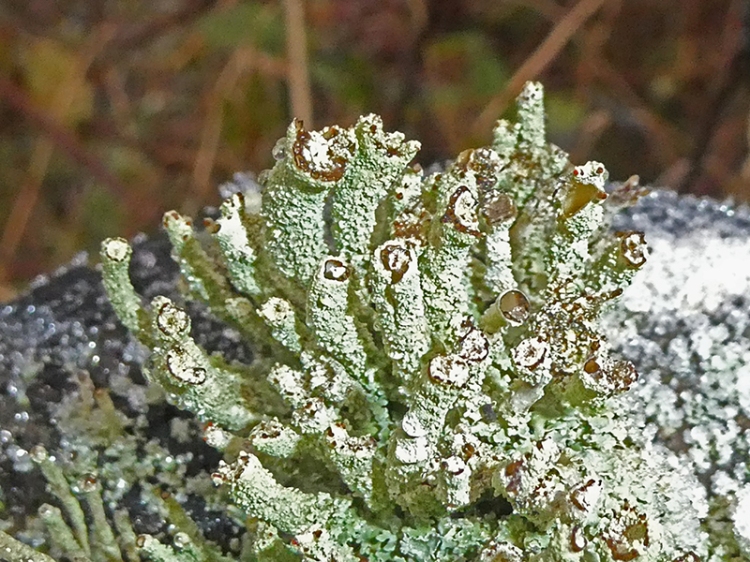 The moss on the bridge parapet was almost invisible under its icy coat. 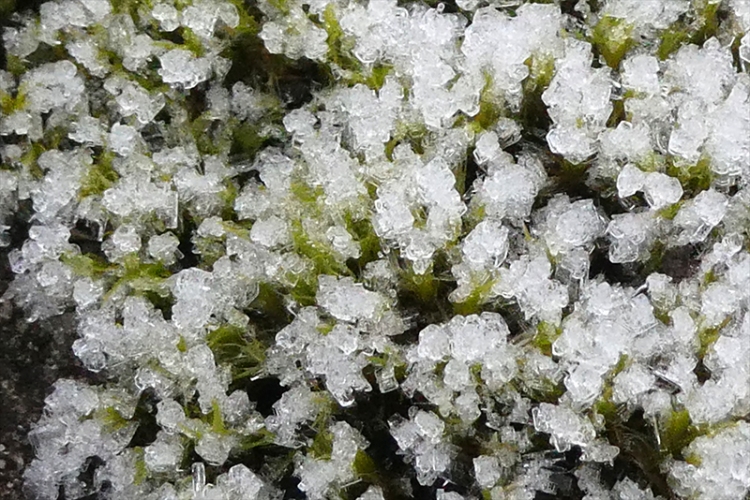 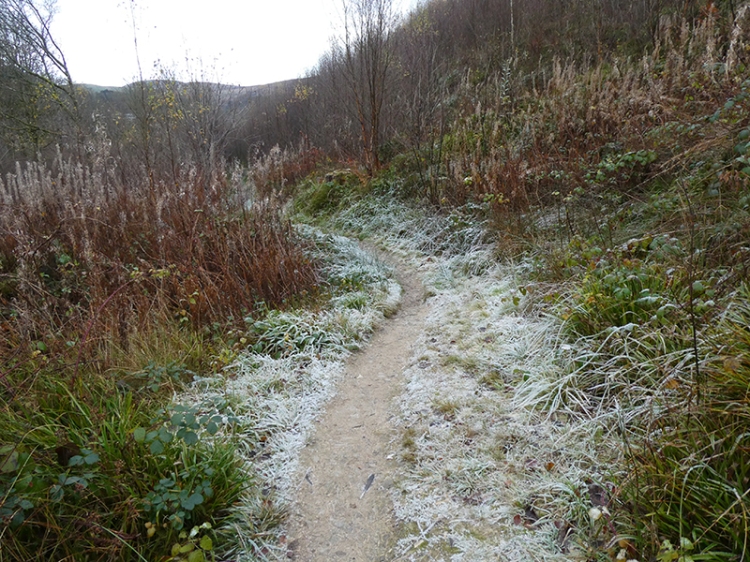 …even though there was ice on every plant beside it… 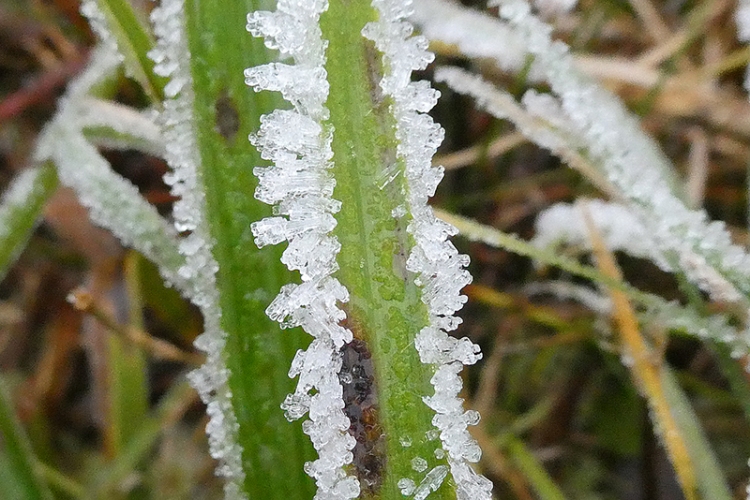 There hadn’t been much melting during the day! 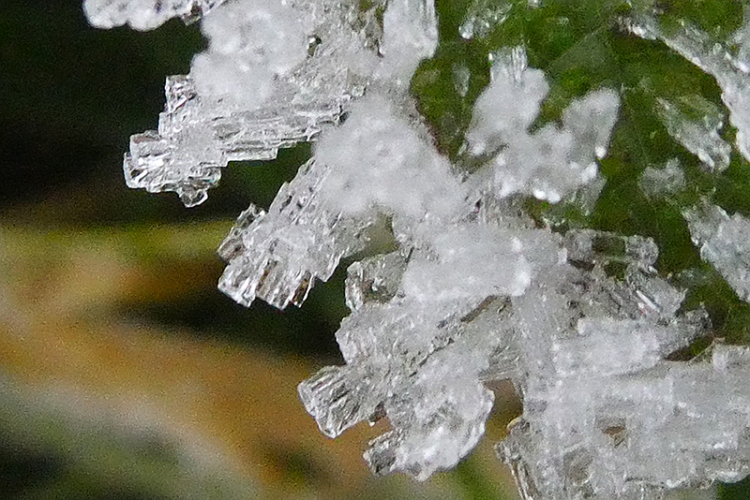 The smoke rising lazily from the chimney at Stubholm showed how still the day was…. 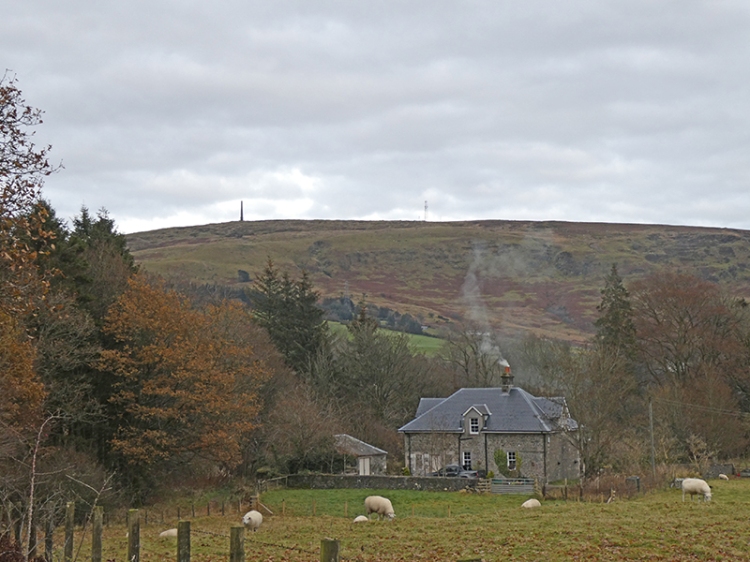 …and there were still a few colourful leaves to be seen when I had passed the house. 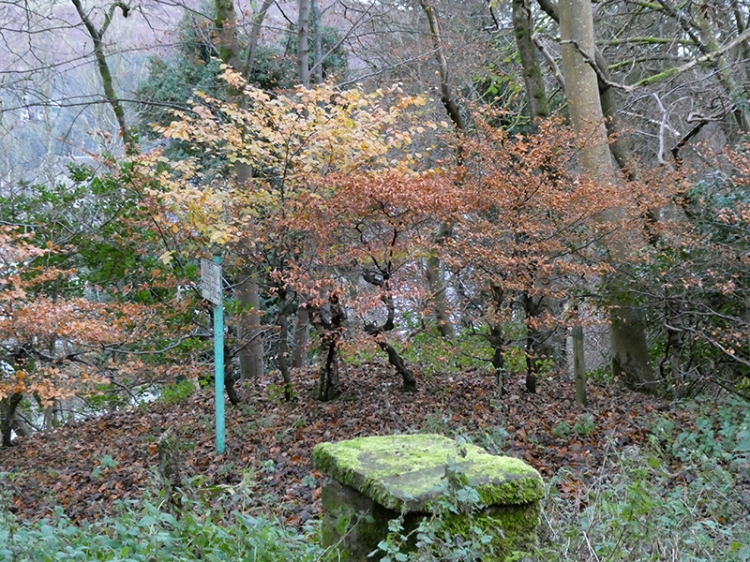 When I got home, I was amazed to see the phlox was having a phinal phlourish.  This is the plant that looks as though it will never die. 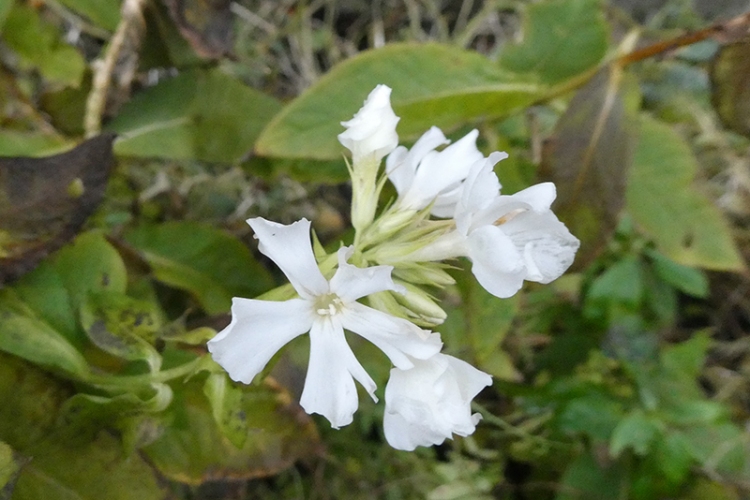 Nancy, the Archive Group treasurer came round to show me  the accounts for the year.  They are in a very satisfactory state and we should be able to go on with our work during 2020.

In the evening, Sue, Susan and Jenny, the other three members of our recorder group arrived and we had a very enjoyable hour and three quarters playing early music.  The selection of music was good and we played it quite well.  Who could ask for anything more?

The weather  has warmed up a bit during the evening and it looks as though we might have a day above freezing tomorrow.  It will still probably be too cold for me to cycle so I am going to get indoor cycling sorted out as I haven’t had a pedal for ages thanks to the cold spell. 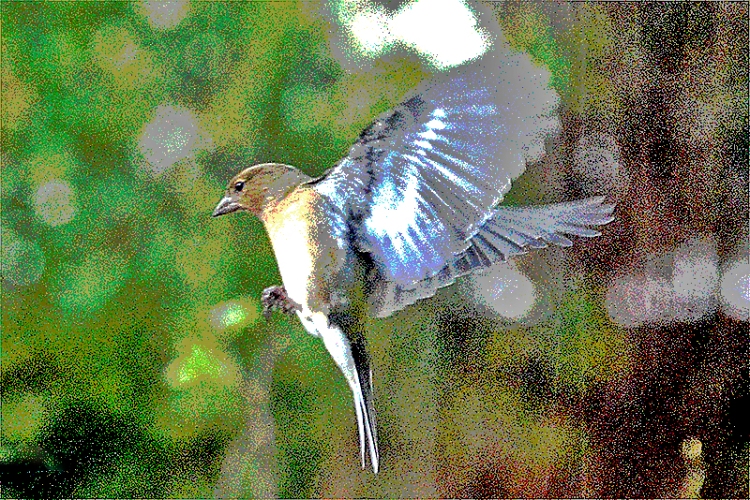 …and this male will be the flying bird of the day. 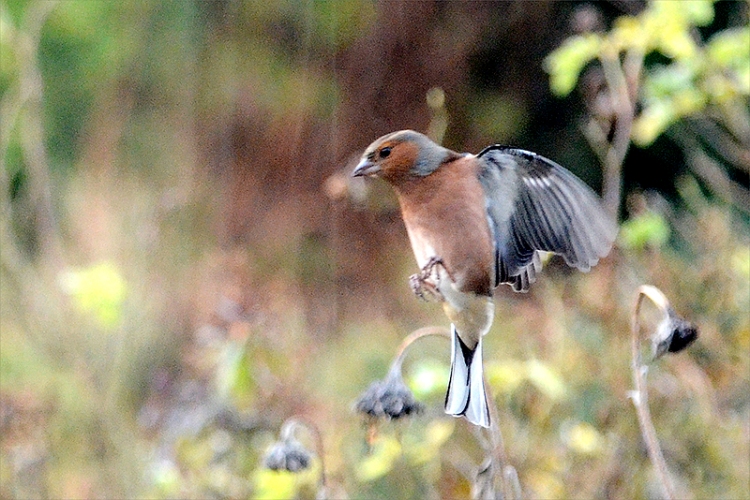 30 thoughts on “A tootle but no pedal”