Today’s guest picture is another from our son Tony in East Wemyss, the land of eternal sunshine. It is not the sharpest picture that he has ever taken, but I thought that it was unusual enough to fill the guest spot.

We had a cool but sunny day here. The temperature was near enough to freezing when we went to church in the morning to persuade me to walk rather than cycle. Mrs Tootlepedal was braver and pedalled.

The choir had rather an adventurous time with some unfamiliar and unrehearsed hymns but fortunately the new minister sang the hymns quite loudly with his microphone turned well up, so there must have been some doubt as to whether anyone heard us anyway.

It was still fine when we got home, and this gave me the opportunity to watch some birds while cooking lentil soup for lunch.

An old friend was present… 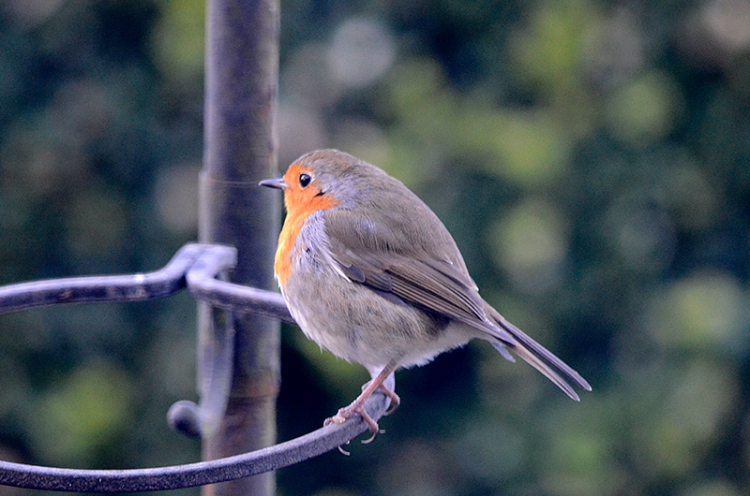 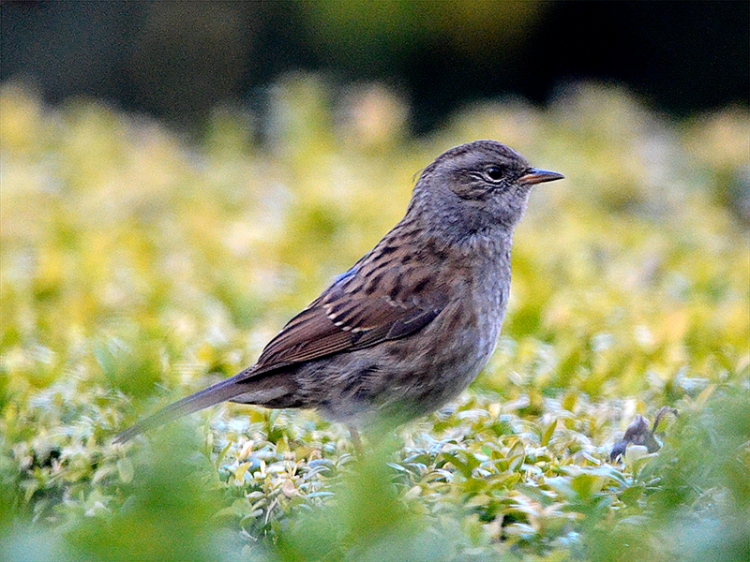 …and were happy to pose for me.

Three hungry goldfinches turned up but they were the only ones to arrive while I was watching. 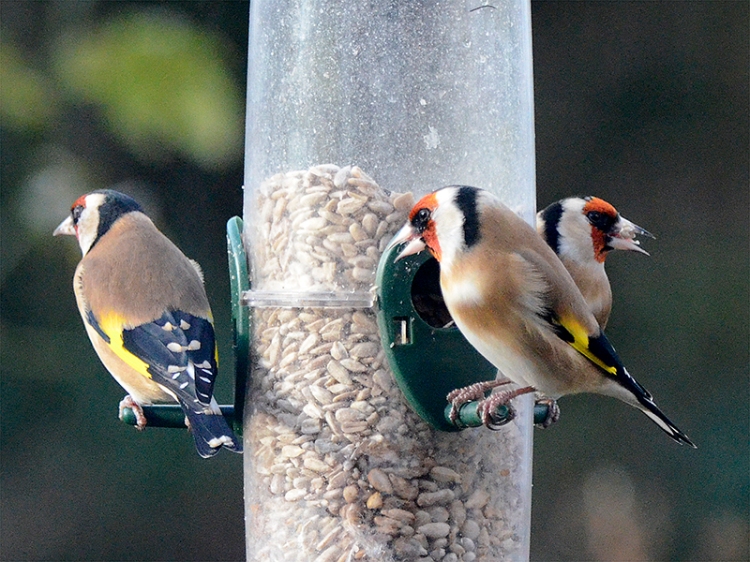 A jackdaw dropped in but didn’t stay. 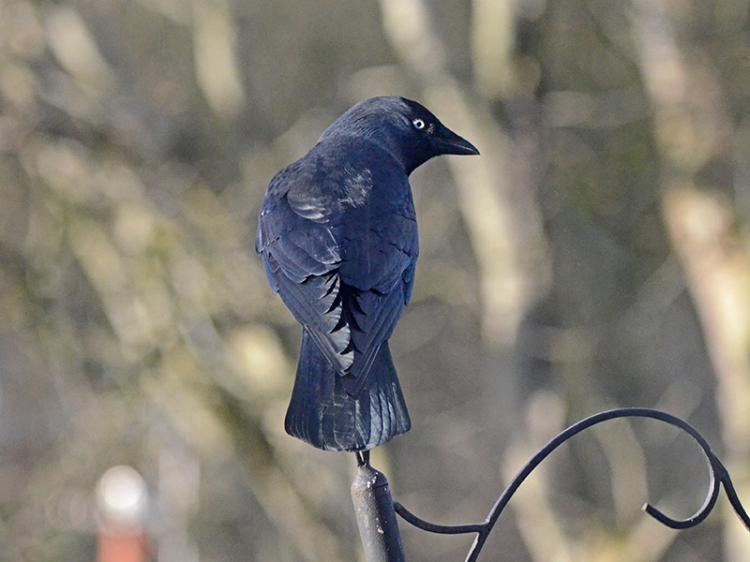 After we had eaten some soup for our lunch, Mrs Tootlepedal and I went for a walk.

At three miles and mostly along the flat, it was less testing than yesterday’s outing but I was still very pleased to find that my feet were in full working order and carried me along without complaint.

Mrs Tootlepedal had some embroidery stuff to deliver to a friend and our route to her house took us along the river. Mrs Tootlepedal walked boldly under some alarmingly sloping trees, looking for all the world like Little Red Riding Hood going to visit her granny (only in blue of course).

…and then to the North Lodge where the parcel was delivered.

…and note possibly the barest bare tree that I have ever taken a picture of.

We walked back along the path above the Lodge Walks, enjoying the pines that are left when the spruces are felled… 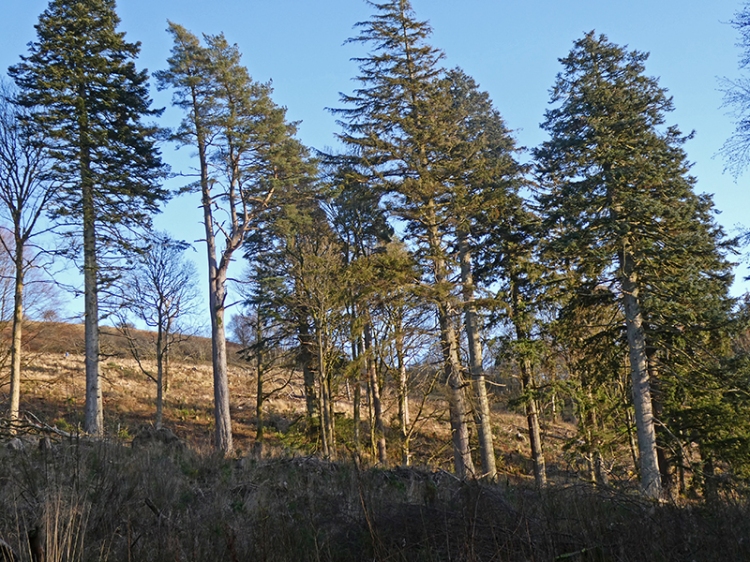 There are a good variety of conifers left and we liked the different cones. I think that the one on the left might be Western Hemlock but I am not good at identifying trees.

As we were sheltered from the breeze by the woods on our right, it was a fine afternoon for walking. Whita was looking at its best when we came to the end of the trees and got a clear view.

There is not much colour about at the moment apart from green and brown, but a vibrant dogwood in a garden did its best to brighten things up.

We came down the hill to the Sawmill Brig, where I was hoping to see a dipper but this little robin on the mossy parapet was the only bird about. 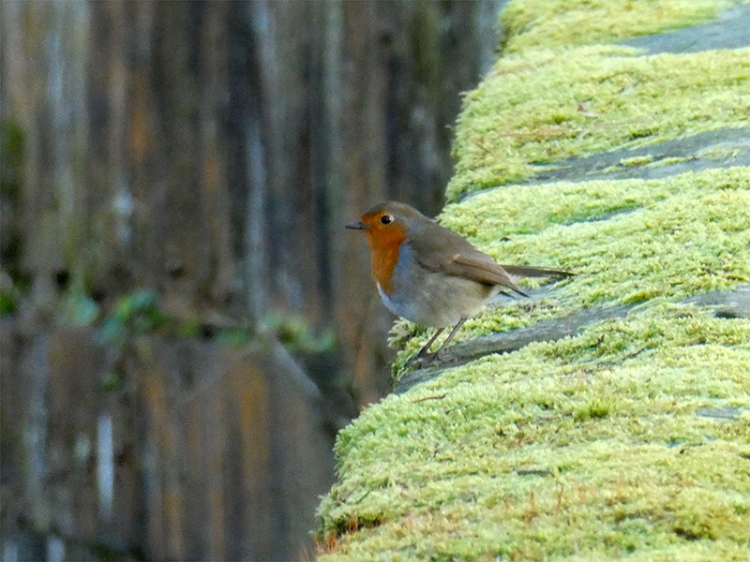 I had seen two dippers on the rocks beside the Kirk Brig when I came out of church in the morning but of course I had no camera with me then. It was annoying but typical that when I had a camera, the dippers were conspicuous by their absence.

After a few rainy days earlier on, the water in the rivers has dropped a lot and only half of the Sawmill Brig was needed to deal with the flow today.

The white duck was floating quietly on the Ewes water as we went along the Kilngreen.

There had been dark talk of snow in the forecasts but there was no sign of it in Langholm and this impressive cloud was the nearest thing to bad weather that we got. 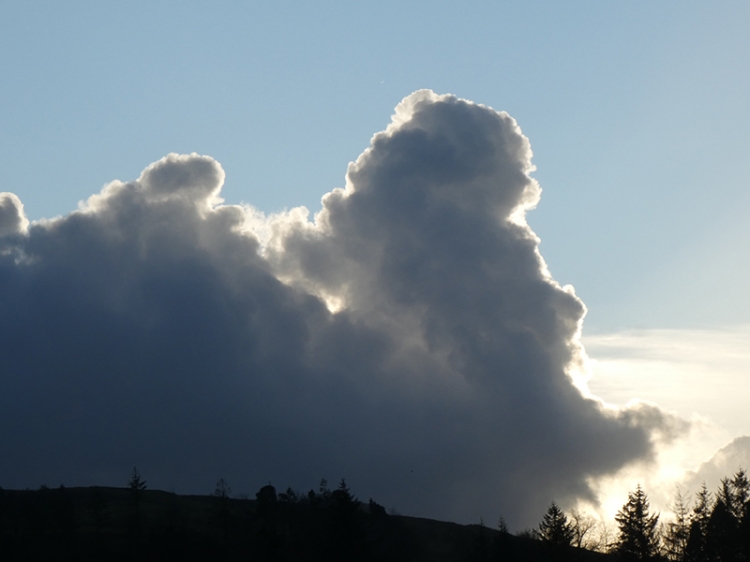 As our Carlisle Choir is on holiday for the next few weeks and Strictly Come Dancing has finished for the year, we were a bit short of entertainment for a Sunday so we went to Carlisle and paid another visit to the pictures.

We saw a well reviewed film called Knives Out. I was a bit doubtful about it when I found that it lasted for two hours which is a long time to sit around. However, my fears were misplaced and the film was great fun from first to last and the two hours sped by. The film was chock full with ideas, but even at two hours there was not enough room to develop them all, so many promising threads were discarded along the way. It must have been tough for the writer/director to know what to throw away as the film developed.

With a few more cold days to come, I am hoping to get more walking practice in during next week. Strike while the iron is cold is my motto.

A chaffinch appears as the flying bird of the day. I might have to adjust the feeder so that birds approach it into the sun! 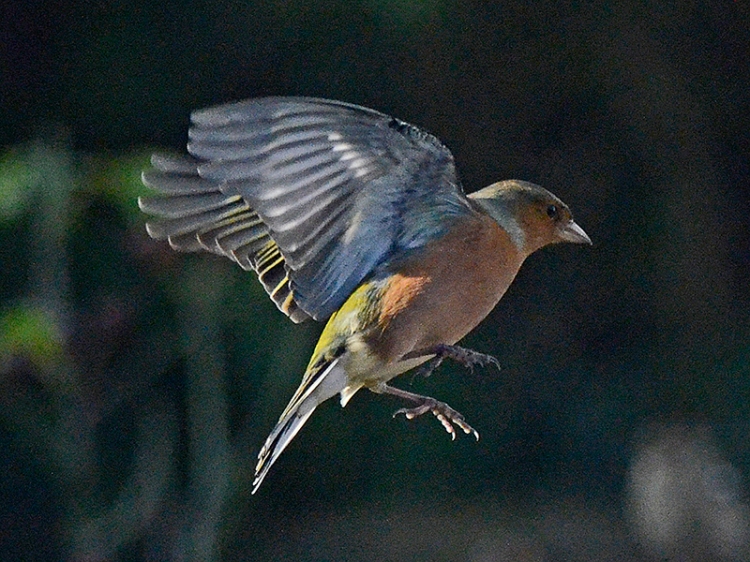