Today’s guest picture is another East Wemyss view from our son Tony.  They don’t don’t just do golden sunshine and handsome canines there, they do purple skies too.

We were intending to catch one of the super duper 5 coach new trains from Lockerbie to Edinburgh today but having checked the early services and found them either late, starting from the wrong station, having only three coaches or cancelled  (or any combination of these), we cracked and decided to stay at home instead.

We might have considered driving the 80 miles to Tweedbank to get a more reliable service from there but the thought of driving home in the dark through the forecast heavy rain didn’t appeal either.

A generally slightly gloomy mood in the Tootlepedal household was not lightened by seeing a cat prowling around the garden chasing our birds so I was pleased to see that a dunnock had survived.  They are often to be found at ground level and are targets for feline predators.

The light wasn’t very good after some heavy overnight rain but a good quantity of siskins found their way to the feeder today. 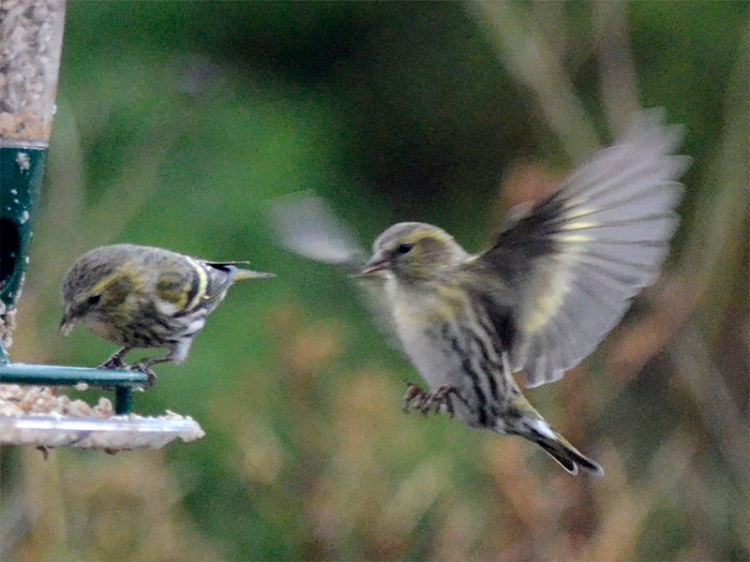 At times they monopolised the perches. 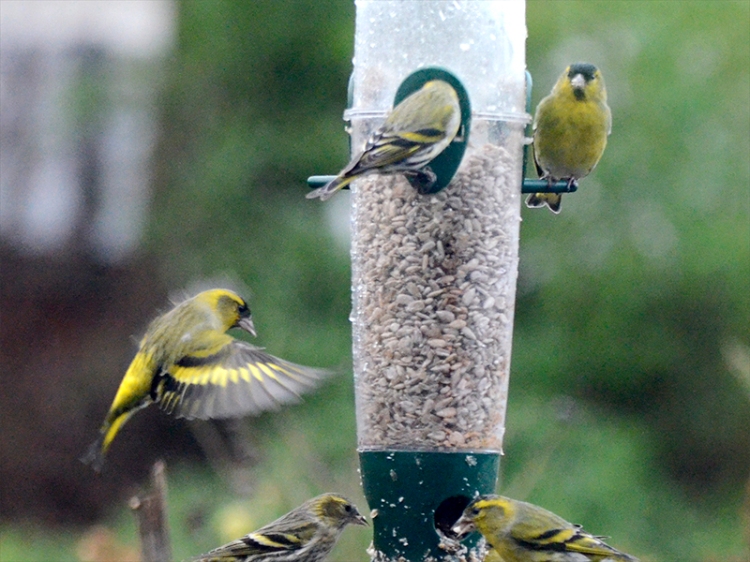 A blackbird with a bright yellow beak turned up as well.

Rather surprisingly, the skies lightened up a lot and instead of sitting around and having coffee and whingeing, I put a loaf in the bread maker and went for a bicycle ride.  I had given my knee a good twist and bump yesterday while getting up too quickly to answer the phone, so I was anxious to keep it moving today to stop it stiffening up.

It was a bit sore at first but it soon settled down, and it got no worse as I pedalled along.  It did mean that I had to adopt a very low gear for going up hills though and this resulted in a very slow pace.

For once, the wind was reasonably light and while the sun was out, it was a treat to be dawdling through the countryside.

I took this small tribute to the wind turbines and the pylons that make and deliver the electricity to our house that lets me write these posts. 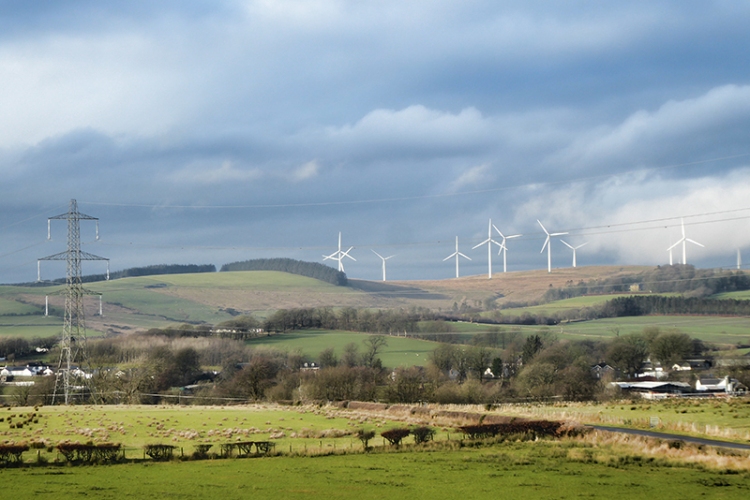 The turbines in the picture above are quite noticeable but they are nothing to a couple of proposed wind farms which are wanting to put 600ft high turbines on top of our small hills.  They may be more efficient but they will overpower our surroundings and we are hoping that they will not get permission.

Turning a little bit to the right after taking the wind farm picture, I managed to get a view of hills with no turbines on them.  If I had gone another degree or two to the right, more turbines would have come into view. 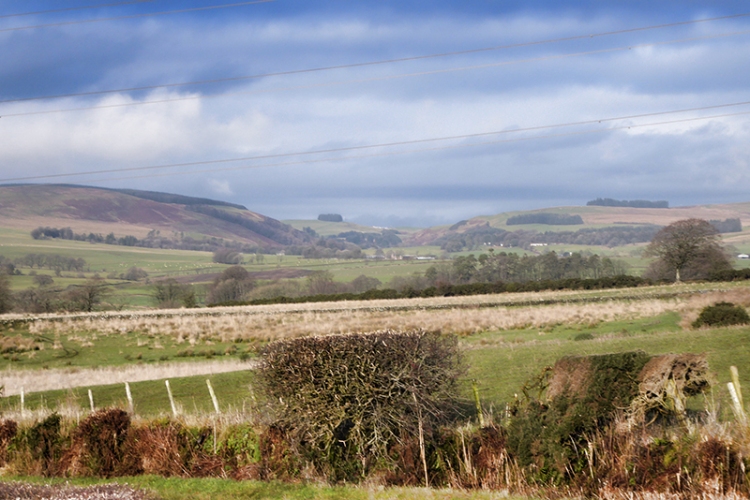 Although my ride started brightly, there were lots of clouds looming up behind the trees… 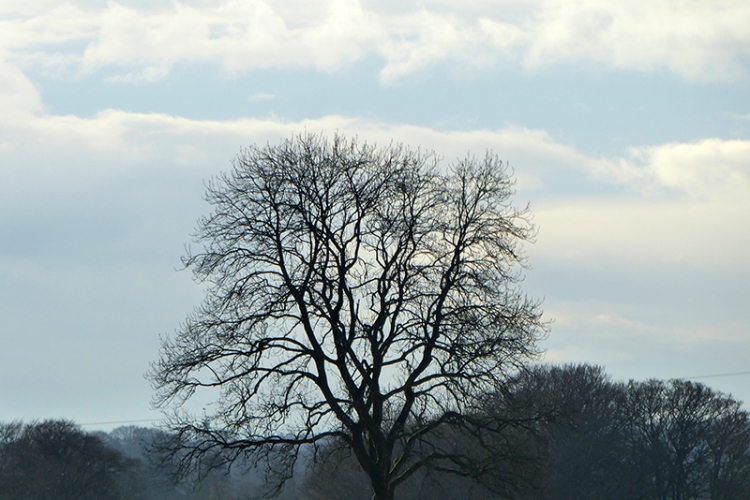 …and most of my ride was in their shadow, though annoyingly it was one of those days when there always seemed to be a of blue sky where I wasn’t.

When we drove to Lockerbie Station last week, Mrs Tootlepedal remarked that she could see two tower houses within a few hundred yards of each other from the old main road and wondered why they had been built so close to each other.

The two houses only become visible from the same spot when the leaves are off the trees.  I could see them both today.

Both of the original towers now have more modern houses beside them.

In spite of the light winds, I was far from my cycling peak today and pottered along.  After I had done the first fifteen miles, I spent most of the rest of the ride trying to ride above a continual rumble of complaints from my legs by conducting coruscating imaginary interviews in my head with prominent politicians, after which they all said that they were very sorry and promised to mend their ways.

I stopped from time to time to stretch and have a snack and tried to find something to photograph when I did so.

An open gate and a track down from the road gave me an opportunity to get a good picture of the first bridge across the River Sark.  A few miles to the south, this mighty stream forms the border between England and Scotland.

As I got near Langholm, mist was beginning to form in the fields beside the river…

…and by the time that I got to Skippers Bridge, it had begun to thicken up both to the north…

I managed 33 very slow miles but as they had kept my knee exercised and added a few more miles to my very poor annual total, I was tired but happy when I sank into a chair and had a cup of tea and some parsnip and sweet potato soup for a late lunch.

As Mrs Tootlepedal also made a delicious venison stew for our tea, I ended the day in a much better mood than I started it.  I wasn’t surprised to read in a newspaper this morning that Lockerbie has the worst record of any station in Scotland and the third worst in the whole UK for punctuality and reliability.  I wasn’t surprised either to find that the railway company are accordingly raising the fare to Edinburgh by 5%.

I didn’t have time to watch the birds a lot this morning and it was too dark when I got back so this siskin group will have to do as flying bird of the day.

28 thoughts on “Overcome by doubt”