Today’s guest picture comes from my recorder playing friend Susan.  She works in Carlisle and had to take the bus to work today as access to her car parking space was impossible.  The lake on the right of the picture is in fact a riverside park and only a temporary lake.

They may have had too much water in Carlisle but we had snow in Langholm today and this was the view from an upstairs window when we got up. 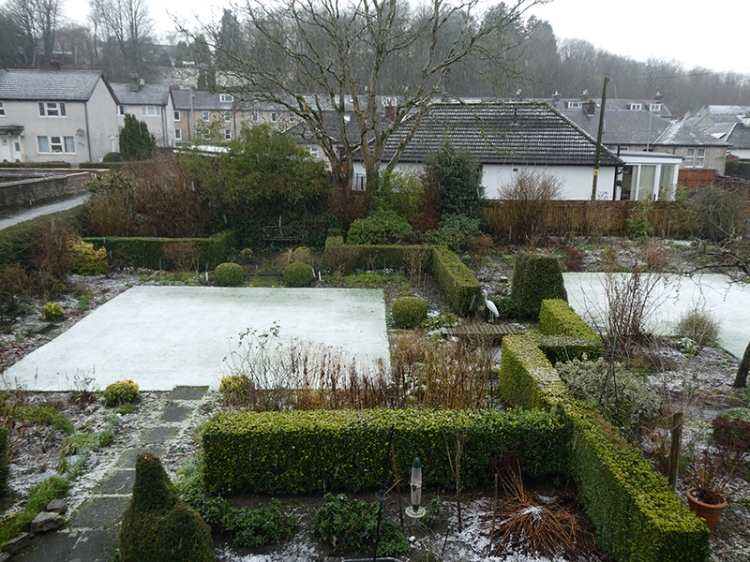 As you can see, there wasn’t a lot of snow in the town but I could see quite a good covering on our hills when I went to the shop after breakfast. 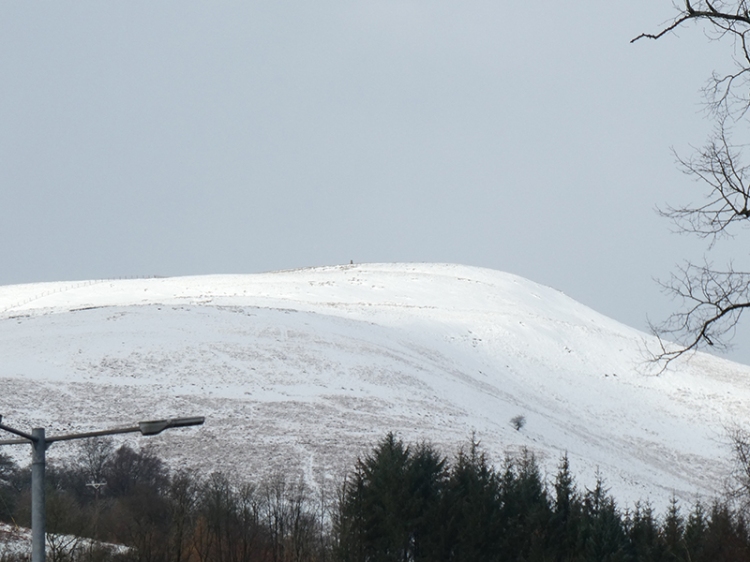 When I got back home, i discovered that the snow had brought an influx of birds to the feeder and there was a queue in the plum tree.

Susan’s father, Dropscone dropped in on his way home from the gym, not to have coffee but to get some documents copied.  He needed them for a battle with the council which was trying to charge him for removing a water meter which didn’t exist.

As soon as he left, more snow arrived.

It came down quite heavily but the temperature was just high enough that as soon as the snow hit the ground, it melted.  This continued through the day and although it really snowed quite a lot, there was less snow in the garden by tea time than there had been at breakfast time.

I spent time talking on the phone to insurance companies about our car insurance.  Two minutes on the phone to one company got £100 knocked off their renewal quotation.  Who knows what I might have got it down to if had stayed on the line longer.  I find this sort of thing rather depressing but it does give a whole new meaning to the phrase ‘an old and valued customer’.  They are trying to take advantage of their old customers and extract extra value from them.

I cheered myself up by checking on the birds. The snow had encouraged birds to visit the feeder.

There were some siskins….

…and a lone pigeon. 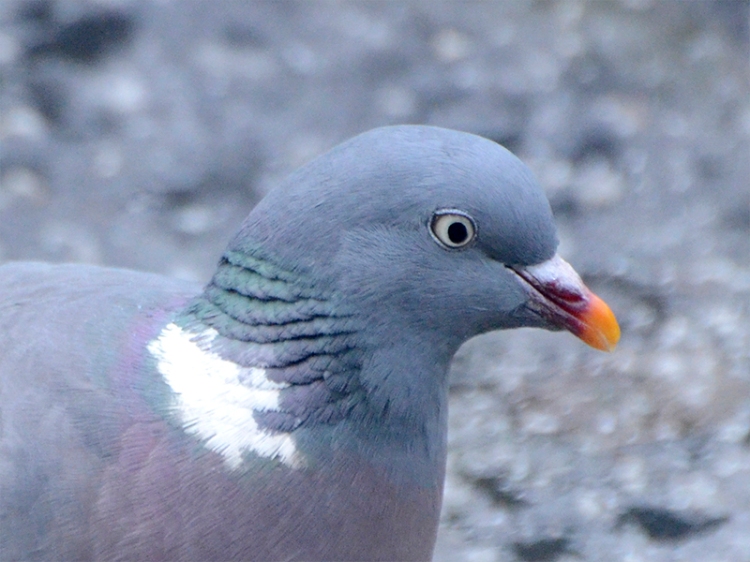 Because it was such a miserable day, Mrs Tootlepedal hit on the happy idea of asking some of our neighbours over for lunch.  I bought some rolls and pate from the shop, while Mrs Tootlepedal made leek and potato soup (the last leek of the year from the garden) and a sticky toffee pudding.

Our neighbours Liz and Margaret and Liz’s daughter, Jane joined us for lunch and we ignored the sleety snow while we tucked in to good food and enjoyed good conversation.  We all agreed that Mrs Tootlepedal had had  a very good idea.

As we ate, we noticed more and more birds arriving outside so I went to check on the feeder.  I was distracted on my way by the sight of two unusual jackdaws on the dam side of the house.

They are a regular pair and we often see them in the garden and round about. 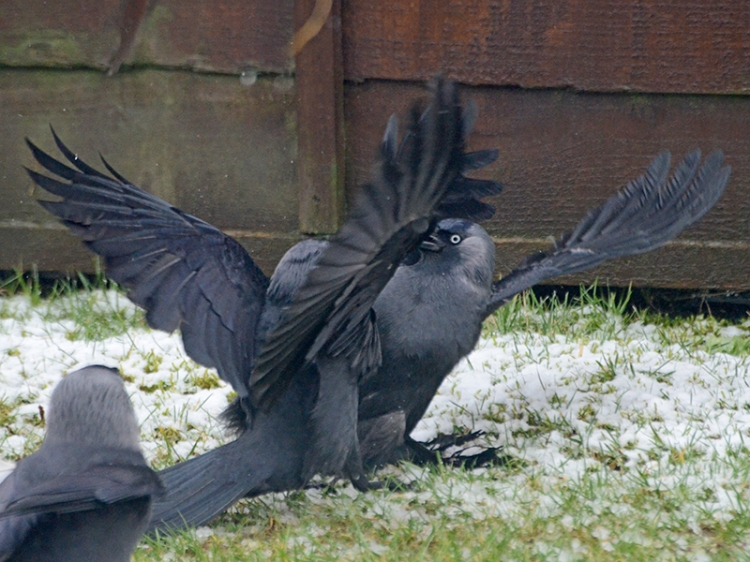 …but the fight stopped as suddenly as it started and all the jackdaws flew off.

When I turned round and looked at the feeder, I found that it was indeed very busy with a mixture of chaffinch, goldfinch and siskin. 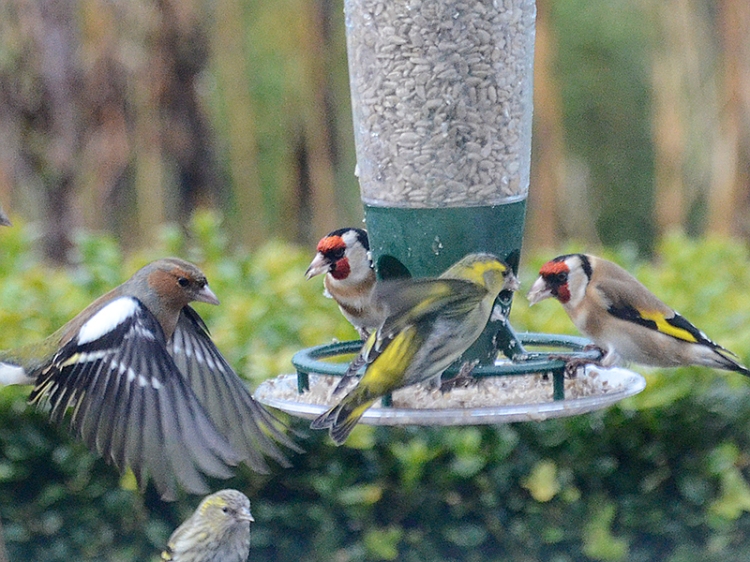 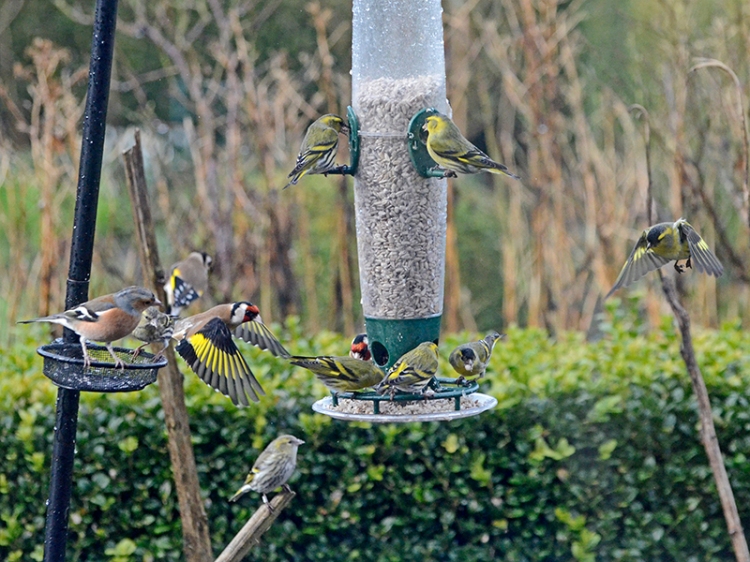 As time went on and the snow came and went, gradually all the birds on the feeder turned into siskins…

…and there were a lot of siskins. 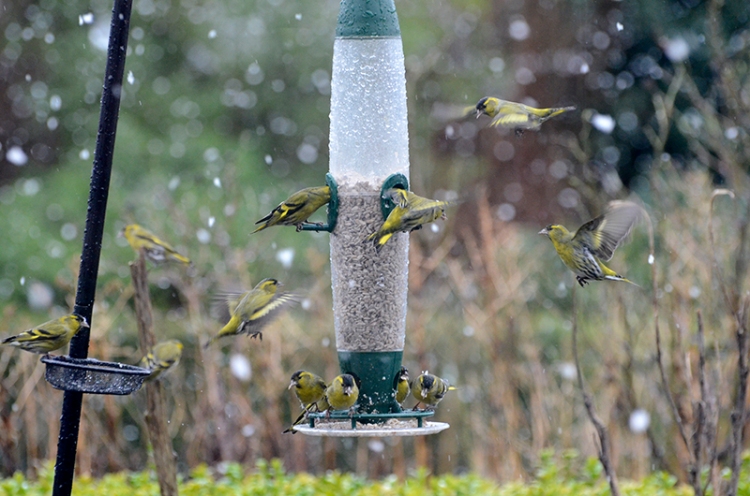 Far more than we have seen hitherto this year. 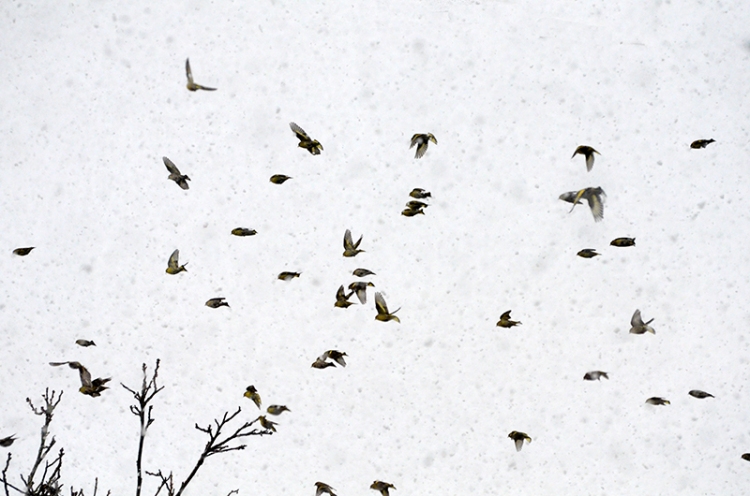 At one time, we counted well over 50 siskins on and around the feeder, the plum tree and the walnut tree.

I put out a second feeder to cope with the rush and by the time that I had got back inside and looked out again, they were both very busy.

After our lunch visitors had gone, I mooched about for a bit and then decided that I would go out for a walk come what may.  The snow showers had been heavy but none had lasted long so I waited for a gap in the weather, put on waterproof boots and trousers, topped that off with my new warm coat and set out.

There was quite a lot of snow on Whita… 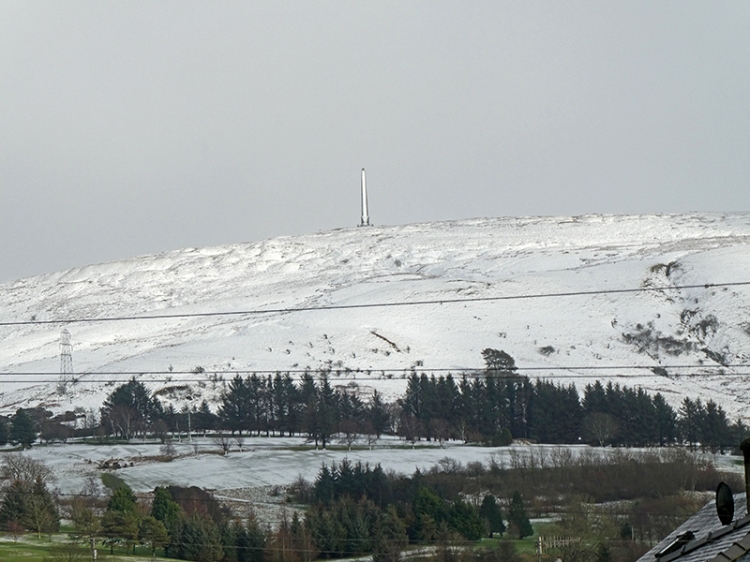 …and the monument on the top of the hill looked very artistic.

Although I was well wrapped up and ready for anything, I was still pleased when the sun came out just as I left the town.

As you can see, it was still pretty damp and I was glad that I had wellies on.

We have had  light frost, strong winds, heavy rain and now snow over the past few days but the lichens have positively enjoyed the weather and were looking better than ever as I passed them on wall and fence post today. 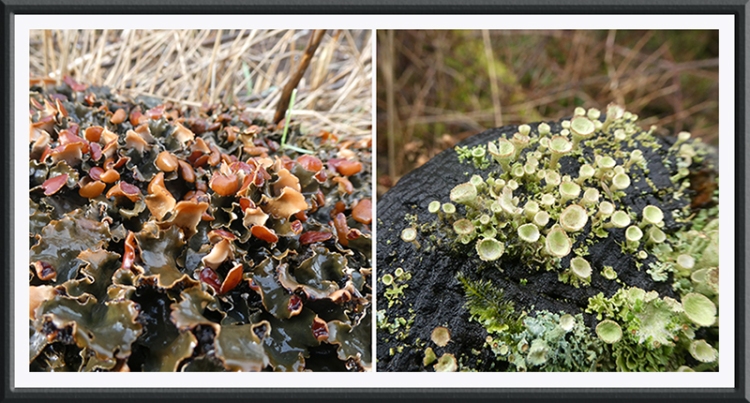 The sun persisted as I walked along Gaskells…

…but when I extended my walk to take in Easton’s on my way back, the snow started again and I had to keep my head well down and my camera in my pocket for the rest of the way.

It must have got a little colder as night fell because as I write this in the evening, more snow is falling, and this time it is settling.  It is still just above freezing so it will be interesting to see if we are going to wake up to a winter wonderland tomorrow morning or just a heap of sodden slush.

We are in for a few cold days and then it is going to warm up a bit to herald the arrival of another storm (called Dennis this time) next weekend.    You can have too much of this sort of thing.  I have always thought that it was a bad idea to give storms names.  It gives them ideas above their station.  You used to get one or two a year in the good old days and now we are getting them once a week!

Still, it stops us getting bored.

The flying bird of the day is one of the fifty siskins.

18 thoughts on “Presents from above”