Today’s guest picture comes from Mary Jo from Manitoba.  She is not in Manitoba at the moment, having left her -15 degree temperatures there for the roasting air of Queensland, Australia where she met these Boer cross doeling goats.

It was so gloomy here, after another night of wind and rain, that we had to have the light on in the morning and that made looking at birds through the window a bit tricky. 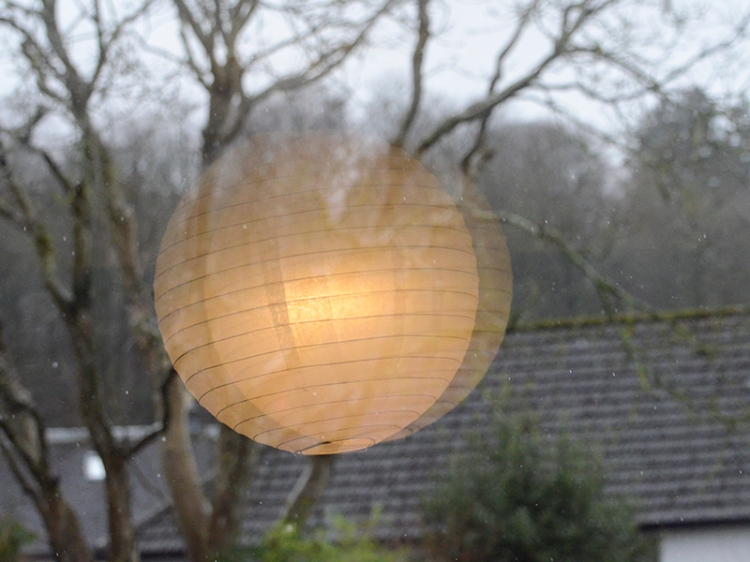 When I did get a sight of them, I could see that it was still raining and the wind was blowing hard enough to making staying on the feeder quite a task.

The birds came and went in busy patches and disappeared to other feeders for long spells.

Just like the school playground, there is always one person with no mates. 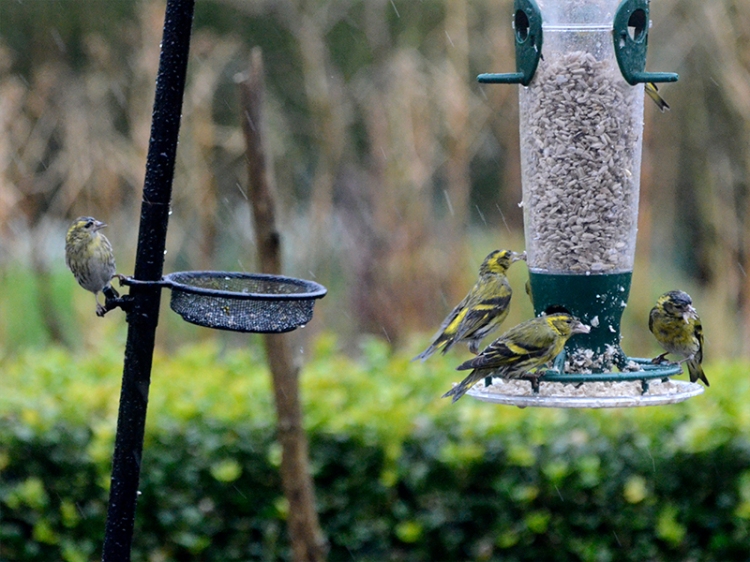 Others could only stand and stare.

As usual with these affairs, everyone in the town knows exactly what should or not be done and the only people with no clue are the experts.  I had a very nice conversation with one of the experts, an Irish lady who seemed to know quite a lot, and learned a bit myself.  The proposed protection mostly consists of high mounds and walls which may protect the town from flooding but will certainly make the riverside less attractive so no one will be able to get everything they want.  The experts have a bold scheme to divert the course of the Wauchope so it will join the Esk on the other side of the church.   I would need quite a lot of persuading before I thought that this was a good way to spend money but I am open to persuasion.

When I came out of the meeting, I went to check on the river behind the hall just to see if the exhibition was in danger of being flooded itself.

There was a bit to go before that happened.

I went home and had lunch with Mrs Tootlepedal, Annie and Evie.  The rain and wind were still going full steam ahead and for some curious reason none of the ladies wanted to join me in a walk, so like that lonely siskin, I went out by myself.

I was well wrapped up and it was reasonably warm so it wasn’t too bad.  The rain wasn’t very heavy but the strong wind made even light rain feel serious so I kept my head down and didn’t take too many pictures.

Most of my pictures featured water since there was a lot of it about.

I didn’t take the opportunity to sit on this bench in the rain and contemplate the churchyard over the water.  I felt the day was grey enough already. 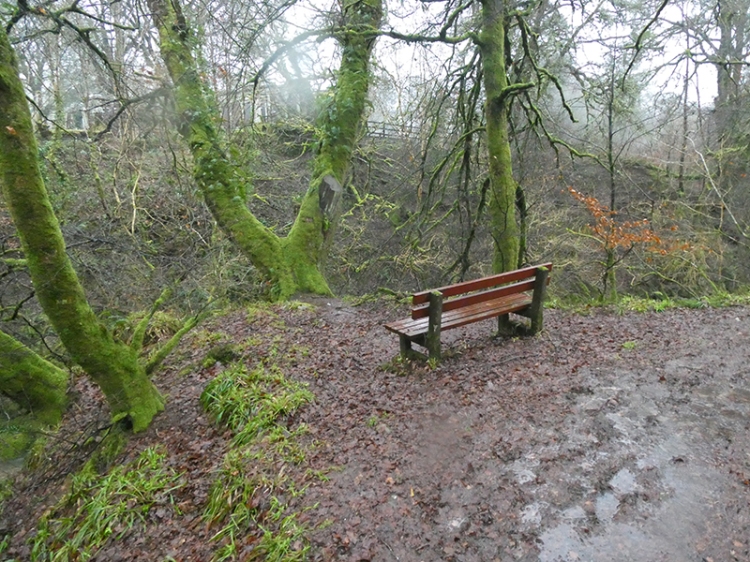 I was standing on a new bridge at the end of Gaskell’s walk, taking a picture of this little cascade…

…when I noticed some movement and saw the the bank was slipping into the water as I was watching. 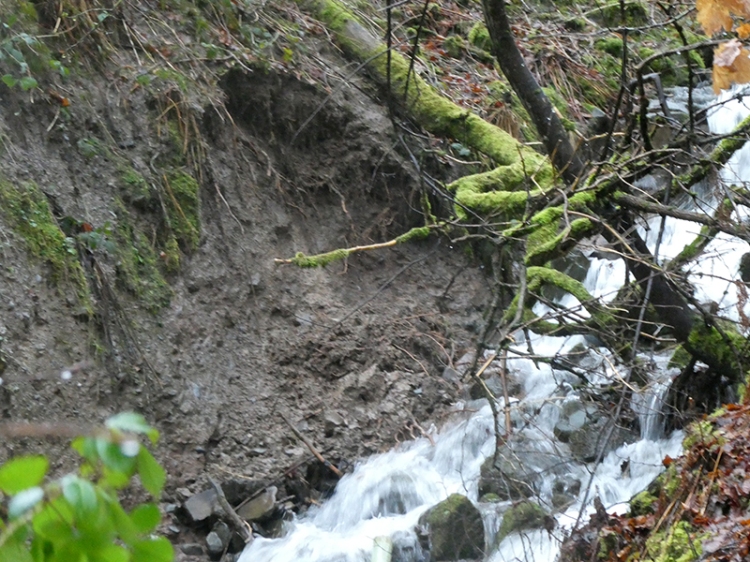 I thought it prudent not to linger on the bridge too long and walked along the track to the Murtholm.  The river Esk was rising.

I got to Skippers Bridge and was impressed by this waterfall running down onto the road.

…but a look at the situation made me decide to walk back to the other side of the bridge and take my picture from the safety of the main road. 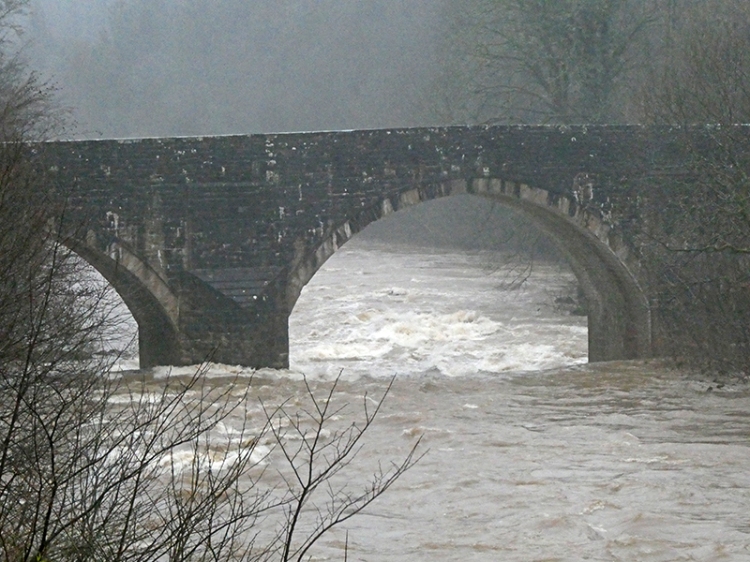 As I walked back to the town, I reflected that there were probably some snowdrops down there. 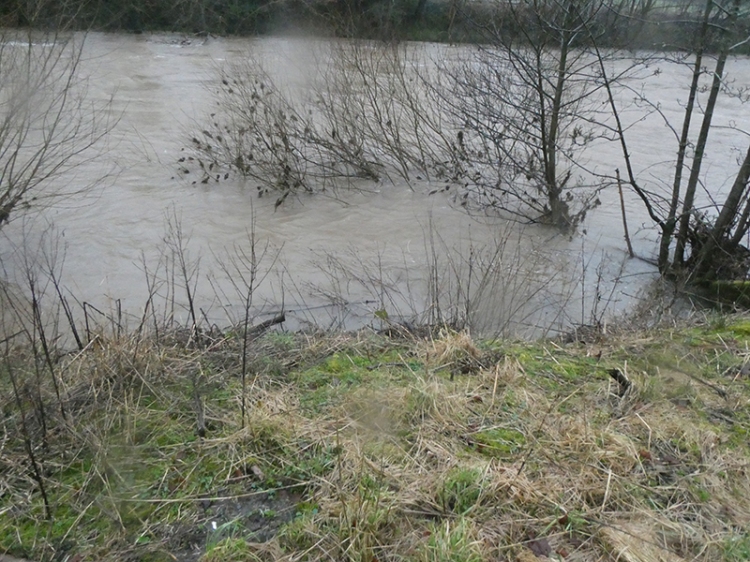 If the flood prevention scheme goes ahead, this path will be widened and have a 2m barrier between it and the river.  It will be safe but the river view will be limited.

The river was full but not flooding when I got back to the suspension bridge.  There would be barriers along both sides of the river here. 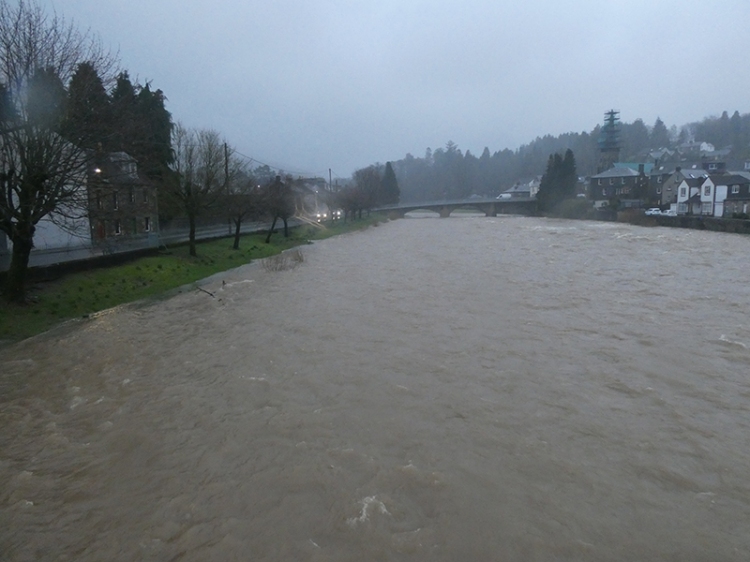 We had more of Mrs Tootlepedal’s tasty brisket of beef for our tea and then after Evie had retired for the night, Mike and Alison came round for their customary Friday night visit.   It showed how miserable the weather was that they used their car to cover the 200 or so yards to our door and still got wet before they got into the house.

Alison and I enjoyed some good music making and when she and Mike had left, I walked down to the river to see if it was still rising.  The rain had stopped after a full day and the river was no higher than it had been at five o’clock.  The Esk is working overtime carrying all our rain away.

I emptied Mary Jo’s scientific rain gauge today.  It had collected five inches of rain during the week.  Some places got that amount of rain in a day last weekend so it is no wonder that there has been heavy flooding.  Once again, we have been wet but lucky,

The flying bird of the day is a siskin.