Today’s guest picture comes from Mary Jo on her visit to Australia.  She found that King Parrots are very partial to an offer of a snack.

We had a bit of a contrast to Mary Jo’s sunny Queensland weather here, as the hills were covered in mist and the ground was white with sleety slush when we woke up.

Even the colours on the redpoll… 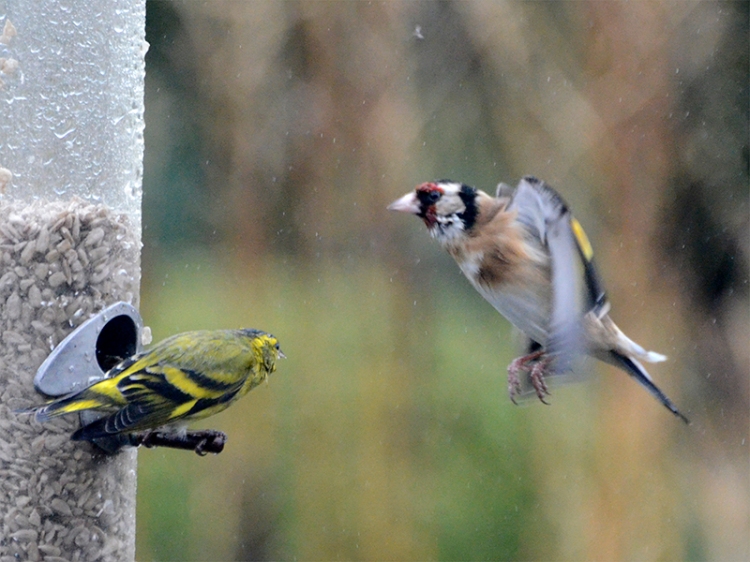 It was raining in a persistent and mean minded way (when it wasn’t sleeting, that is) and going outside was not an attractive option.

So I stayed in and watched the birds.

Until I got bored and walked round to the shop to get milk.  I was protected from the worst of the wind and rain by a large umbrella.

After the delight of yesterday’s sunshine, it was not a colourful day…. 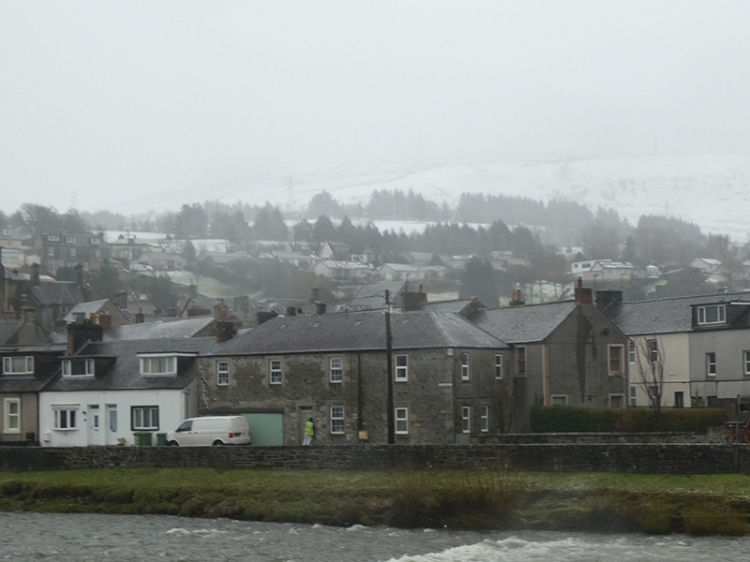 …but the route to the shop takes me along the waterside so there is always the chance of seeing something interesting.  Today it was a pair of oyster catchers keeping as snug as they could in the horrible conditions.

Perhaps their posture is an example of keeping a weather eye open.

I took the milk home and then took myself off to visit Sandy, who is still housebound.

He was very cheerful and entertained me to coffee and excellent ginger cake.  On my way home, I stopped to look over the town to see if the prospects for the day had improved at all.

When I got back, I put the bread maker to work and made some soup for lunch and while it was cooking, I had another look at the birds.  There was no shortage of customers for seeds…

…and the redpolls got into some keen competition for perches.

The winner returned to the perch, although it didn’t look very happy about it…

…while the loser sat on a pole and pretended that it didn’t care.

Down below, a dunnock merged into the background. 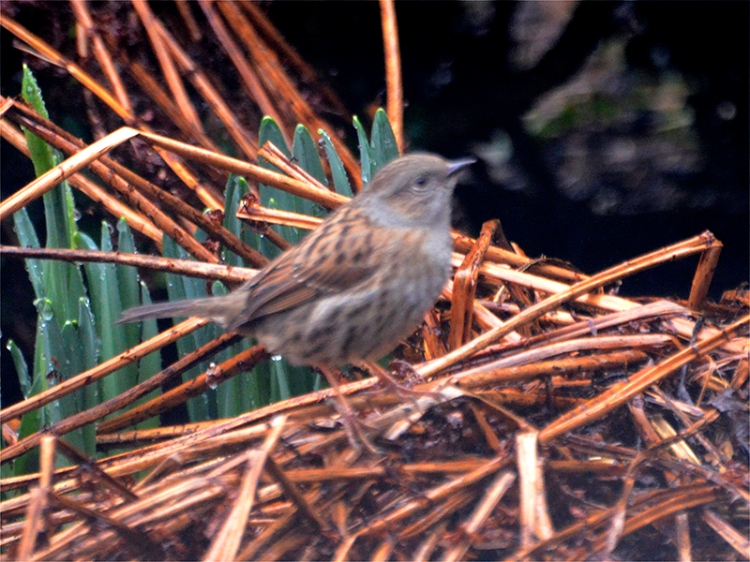 The wind dropped and after lunch, it stopped raining for long enough for me to put on my cycling gear.  Then, of course,  it started again.  I wasn’t going to take my gear off though, after all the bother of putting on what seemed like several hundred layers of warm clothing so I got my bike out and went off with hope in my heart and rain on my cycling glasses.

I was worried that the morning sleet might still be lying on the road in slushy patches but it was well above freezing and the rain had done its work so the road was clear.  It was running with water in many places and I was very glad to have a stout pair of waterproof socks to keep my feet warm and dry.

I had an unusual experience when a lorry coming the other way met me at one of these puddly spots.  As it approached me, and absolutely on purpose, it slowed down and passed me without splashing me.  I was so shocked that I nearly fell off my bike.

After three and a half miles when I got to Wauchope Schoolhouse and began to feel the wind in my face as I left the shelter of the valley, I considered the way ahead…

…and went back to Langholm.

A bull in the field opposite was not impressed by my lack of get up and go.

I took this picture on the way back and despite what you may think, it is a full colour shot. 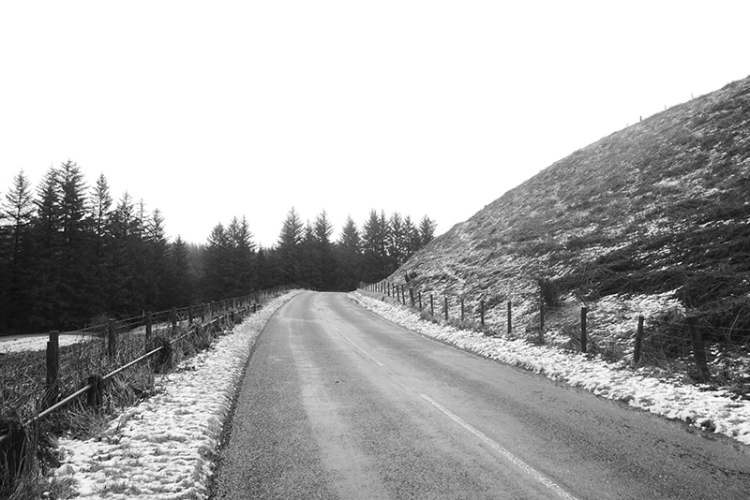 When I put it into my photo editor in the evening, I changed it into greyscale mode. It summed up the day when as far as I could see, nothing changed in the picture at all.  Truly a grey day.

I got back to Langholm and since the rain had stopped, I went round the town and pedalled back up to Wauchope Schoolhouse again. In the end, I squeezed sixteen miles out of a miserable afternoon but as it was my first cycle ride for two weeks, I was grateful to get any miles in at all.  And I felt a lot better for the exercise.

I put my bike away and went in to watch the birds again.  I had put a second feeder out in the morning as there seemed to be quite a lot of birds about, and both feeders were getting well used before I left with a selection of goldfinches, siskins and redpolls in action.

By the time that I got back, a lot of the seed had disappeared.  The redpolls and goldfinches had disappeared too and the siskins had taken over completely. 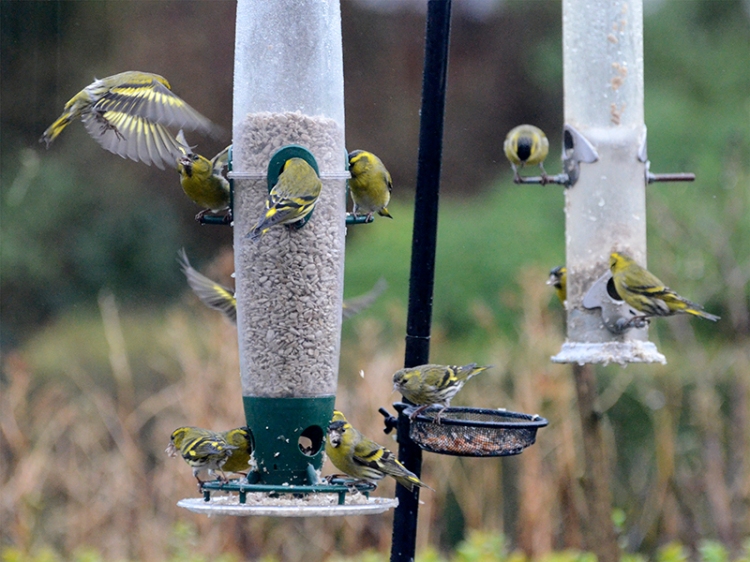 …all over the walnut tree…

…and on the feeders themselves.

I counted over a hundred of them in the garden.  I just wish that the light had been better so that I could have done them justice.  As it was, the rain started again and I went off to have a shower, leaving the skins to it.

When I came downstairs, I found that Mike Tinker had dropped in for a cup of tea so I joined him and Mrs Tootlepedal for a chat and some serious biscuit consumption.

When Mike left, it was time for my flute playing friend Luke to come round for our weekly burst of duets.  He told me that is going for a job interview tomorrow so I wished him luck.  I would employ him as he is a very sound lad.

The active day ended with a plate of Mrs Tootlepedal’s fish pie, always a good way to end a day.

Looking at the forecast, there seems to be no end to our run of cold, wet weather for the next week with only a very occasional glimpse of sunshine promised, so I am more pleased than ever to have sneaked a few miles in today.

The flying bird of the day is a chaffinch who arrived before the siskin invasion.

19 thoughts on “An invasion of colour on a grey day”