Today’s guest picture comes from Mary Jo’s Australian trip.  Her husband used his phone to take this shot of a big flock of bats.

We woke to brilliant sunshine and we were easily able to ignore a crisp temperature and a nippy wind.  Not having rain and a gale were quite enough to keep us happy.  The crocuses were ignoring the chill too and had opened their petals to greet the sun at an unusually early hour. 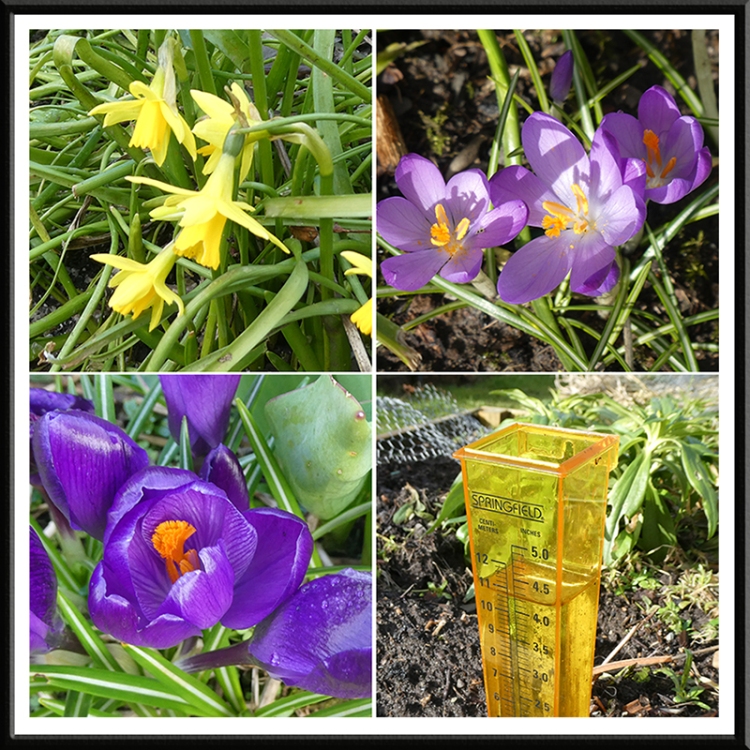 Mary Jo’s scientific rain gauge showed that we had had another four and a bit inches of rain recently so it is remarkable that the crocuses haven’t thrown the towel in.

And talking of towels, Mrs Tootlepedal thought that the best thing about the morning was that she could hang the washing out without it coming back in wetter than when it went out.

Dropscone, back from his Northumbrian holiday, arrived with scones and our friend Gavin kindly dropped in to help us eat them as we drank our coffee.

Dropscone had enjoyed his break with his two daughters and his granddaughter in spite of some very windy days.

After coffee, I spent some time pretending to be a man who was going cycling but actually watching birds instead.  (It may have been sunny but the wind was far from kind.)

The birds tended towards sneaking in from behind the feeder today. 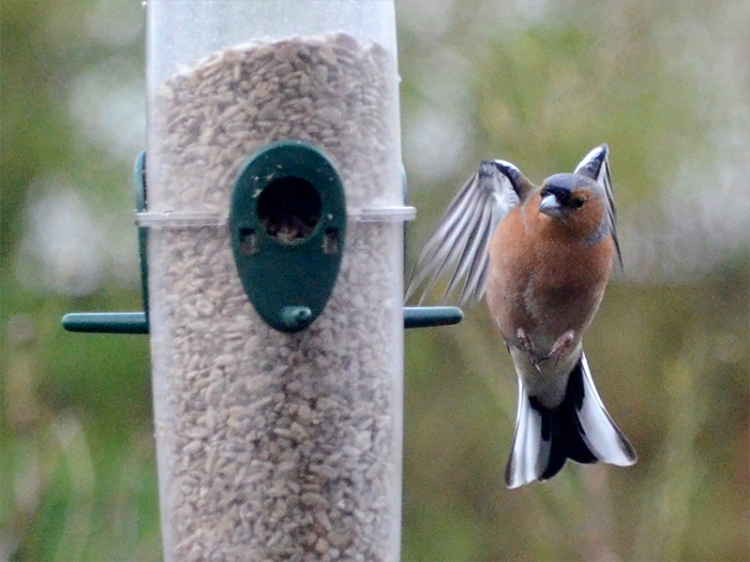 Both chaffinches and siskins were at it.

And a blue tit escaped before I could catch it.

It was thin pickings for my camera but fortunately some chaffinches were prepared to co-operate.

This one came in at a perfect height…

…but this one was all too conscious that it was bit too high for comfort.

In the end, I couldn’t waste any more time so I pumped up my tyres and set off into the unforgiving breeze.

The government was keeping an eye on my progress.

I was thinking of doing 30 miles, heading into the wind for 15 miles and then being blown home, but the sun had long gone and there was a sort of rain hanging about in the air and annoying me.  After only three miles both uphill and into a twenty mile an hour breeze, I thought better of it and turned left and headed for my twenty mile Canonbie circuit instead.

I kept my head down and didn’t stop much as I didn’t want to get chilled.  However, this fine tree caught my eye after five miles so I stopped for it…

…but I didn’t stop again until I got back to Langholm.  In fact I didn’t even stop when I got to Langholm because, out of the blue, the sun had come out and things looked a lot brighter so I pedalled on through the town.

I still wasn’t intending to take any more pictures but the Ewes Valley mugged me.

And then I stopped again to record a common sight these days, a puddle that has become a pond.

And with the sun making stopping a little less chilly business, I allowed a tree to detain me…

…and thought that I ought to record Ewes Church, my turning point for home… 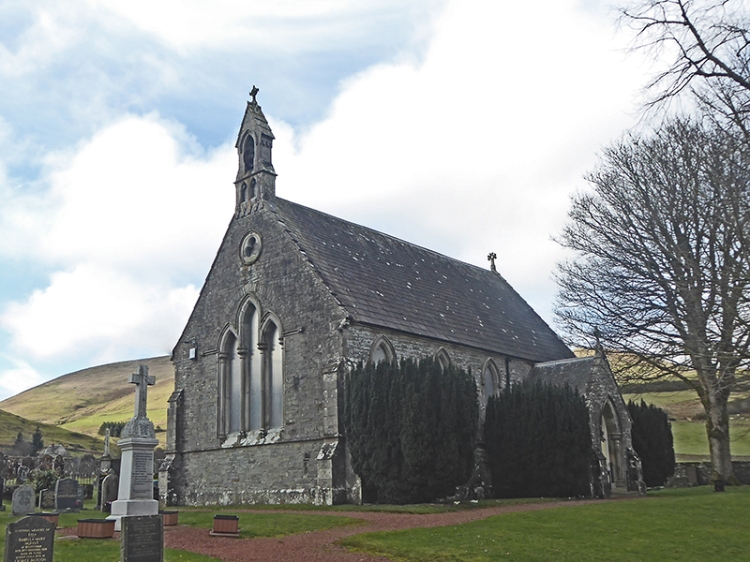 …and a nearby bridge (with an additonal gate as a bonus).

Some black clouds rolled over me as I pushed into the wind on my way back home but I sneaked past a rain shower and got home dry, having coincidentally having done exactly the 30 miles that I had set out intending to do.

Gavin had seen some young wild goats yesterday so when I got home,  I asked Mrs Tootlepedal if she would like to see if we could find them too.  She thought that this was a good idea, and we scooped up Mike Tinker who had come or a cup of tea but got potential goats instead, and set off up the hill in the Zoe.

As we turned onto the hill road a mini blizzard started and we got some rather odd views as went we went up the hill.  We could see a sunny Ewes Valley through a curtain of hail.

The hail and snow got worse as we reached the moor and we were just beginning to think that our trip was ill advised, when the clouds blew over and a rainbow appeared.

We got down to the Tarras and sure enough there were two goats with kids.

This pair turned their backs on me…

…but this proud mother was more accommodating… 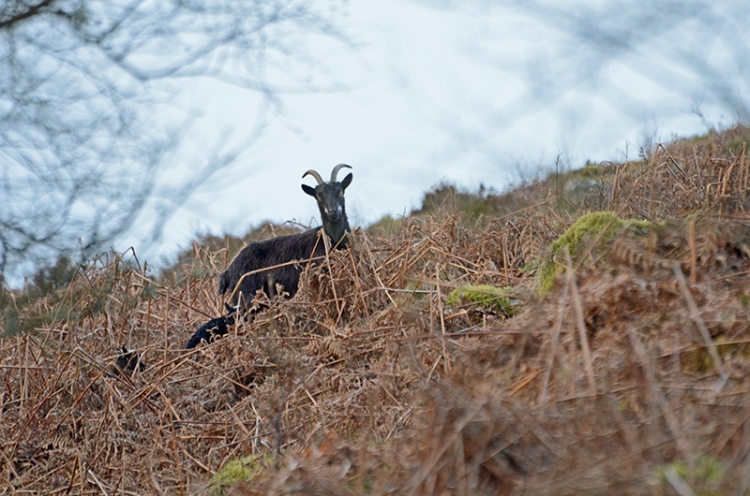 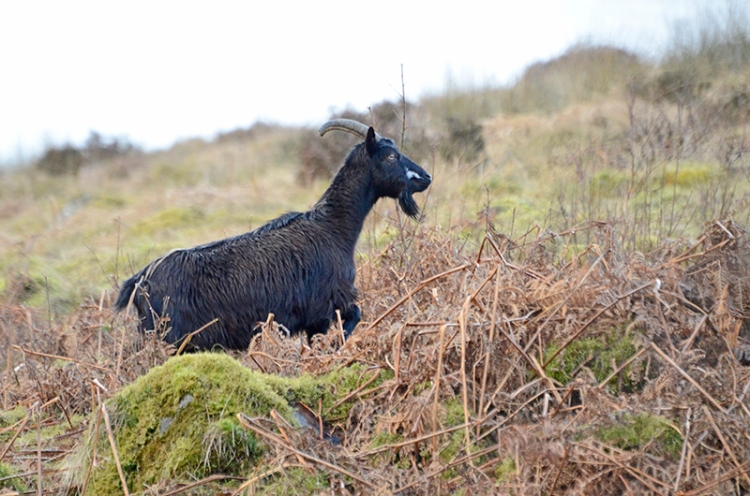 …then got her children to pose prettily for the camera.

The snow had passed without a trace and the light was lovely as we looked up the Tarras Valley before we headed for home.

A busy day wasn’t over yet, as first my flute playing friend Luke arrived for some duets and then, after tea, Mrs Tootlepedal cut my hair.  This was a load off my mind.

She had been able to get out into the garden for some tidying up work while I was out cycling, so we had made good use of a better day between us.

The flying bird of the day is one of those accommodating chaffinches, eyeing up its approach to the feeder. 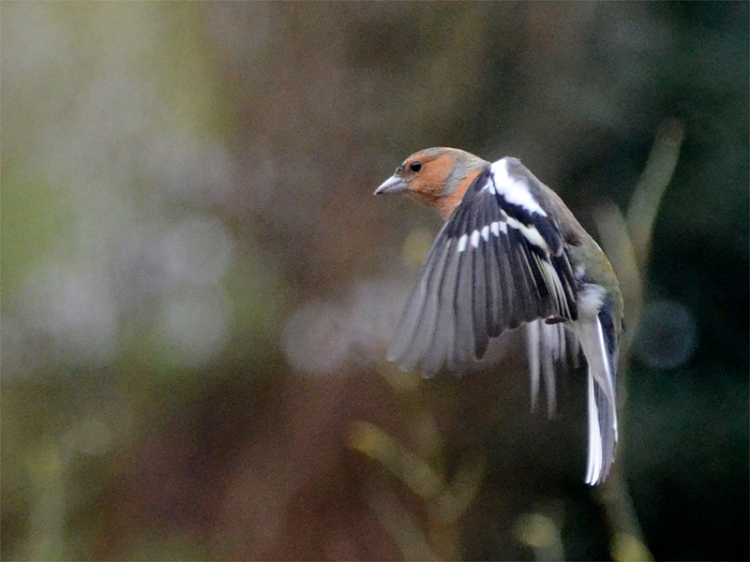