Today’s guest picture comes from my brother Andrew.  He visited Kedlestone Hall in Derbyshire on one of the better recent days.

Mrs Tootlepedal went off to yet another meeting after breakfast and inspired by her vigour, I managed to get myself into my cycling gear and out of the house before coffee time.  Admittedly, I was helped in this by the knowledge that the forecast for the afternoon was very poor and it was now or never as far as comfortable cycling went.

There are now some definite signs of spring as I go round my customary 20 mile Canonbie route with daffodils out beside the road in several places. 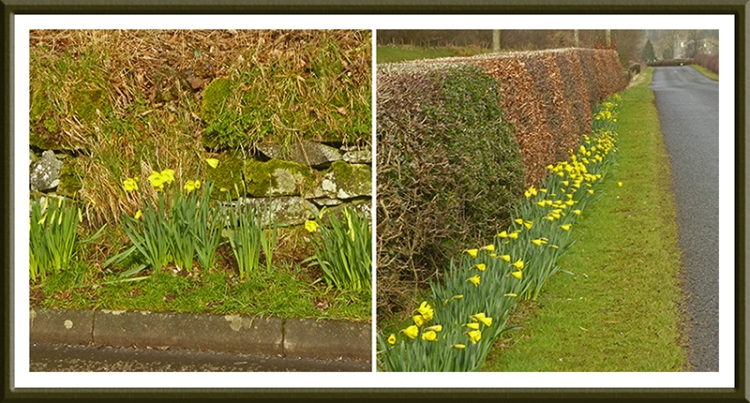 Rather annoyingly, the brisk breeze was back again but one of the reasons that I like my Canonbie route so much is that it protects from the worst of a westerly wind and I get some help going home.  All the same, I had to keep my head down and pedal quite hard at times so I didn’t stop a lot.

When I did stop, the Canonbie cows were too busy to look up. 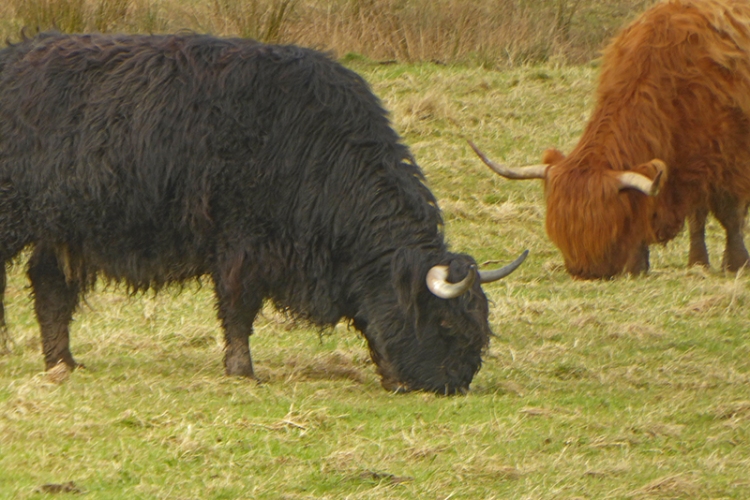 The sun came out as I was pedalling home, and with the wind behind me there were moments when it almost felt warm.

The sun picked out this dramatic tree near Irvine House. 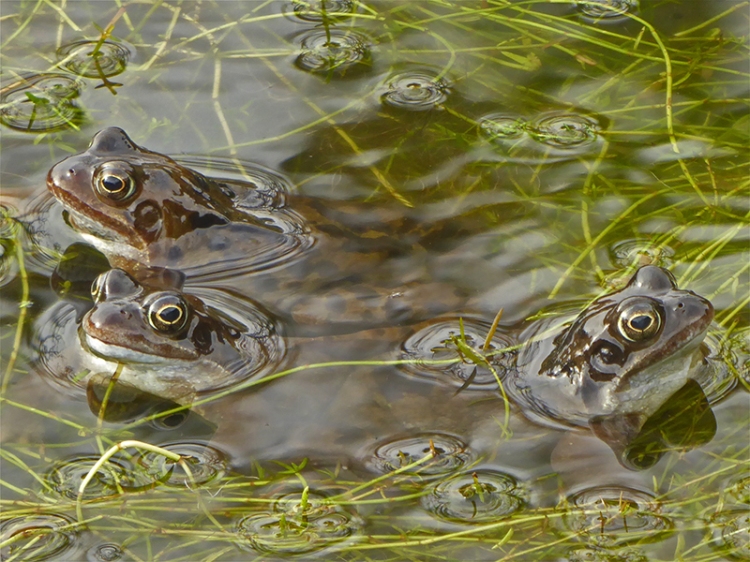 …and an inventory of growth in the garden…

…I went off to cadge a cup of coffee and a ginger biscuit or two from Sandy.

He is remaining remarkably cheerful in spite of the tedium of being housebound for several weeks.  He has some entertainment though, as a pair of blue tits have settled into the nest box on his shed.  I caught a glimpse of one them today.

On my way home, I was struck by these dark shapes in a tree.  They turned out to be a pair of rooks considering  redecorating the sitting room in their nest in the rookery.

I got home in time for lunch and was joined by Mrs Tootlepedal.  Her meeting had extended itself into taking important visitors up on to the moor, where they had seen two hen harriers and several goats and kids.  Everyone had enjoyed this a lot.

After lunch, I had a moment to watch the birds.

Goldfinches flew in from every angle…

…and once ensconced on the feeder, they looked both this way and that. 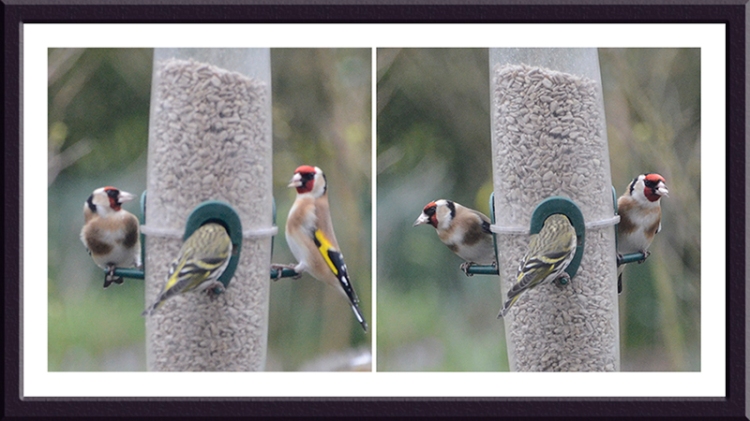 Having checked the forecast again, I discovered that I might just have enough time for a walk before the rain started so I set out for a short walk over three bridges.

I had had the best of the day on my cycle ride. The cold was now colder, the sky was greyer and the wind was stronger but there were still definite signs of spring along the waterside on both sides of the Langholm Bridge.

And a good supply of birds posing for the camera.

The ducks have paired off for spring and these two were getting their heads together over some tasty snack just under the surface as I went over the Sawmill Brig. 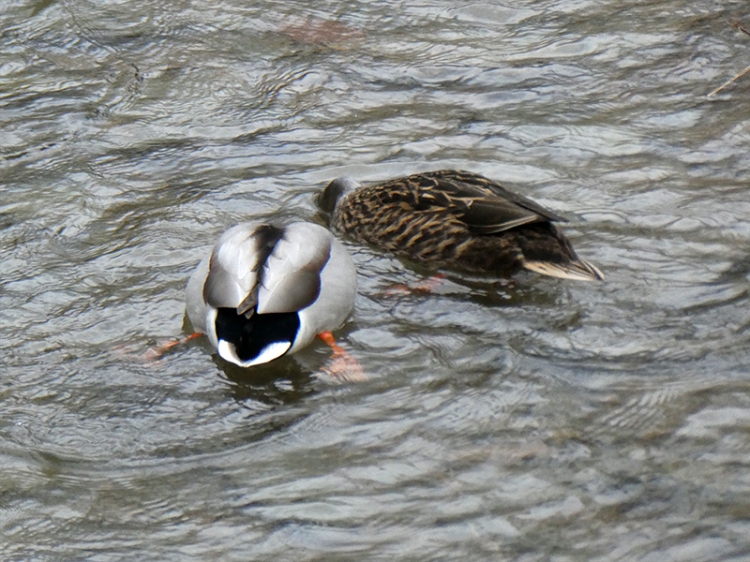 I walked up past the Estate Offices and admired the wall beside the road.  It is the stone wall with everything: ivy, peltigera lichen, hart’s tongue fern and any amount of moss.

In fact, I was quite surprised to be able to see some stones at one point. 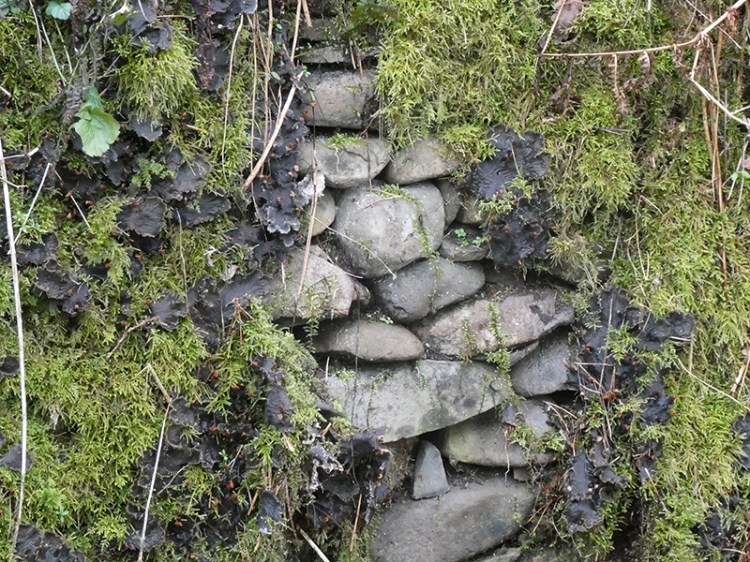 You see a lot more colourful sheep in the fields these days than you did when white wool was a big source of the sheep farmer’s income. 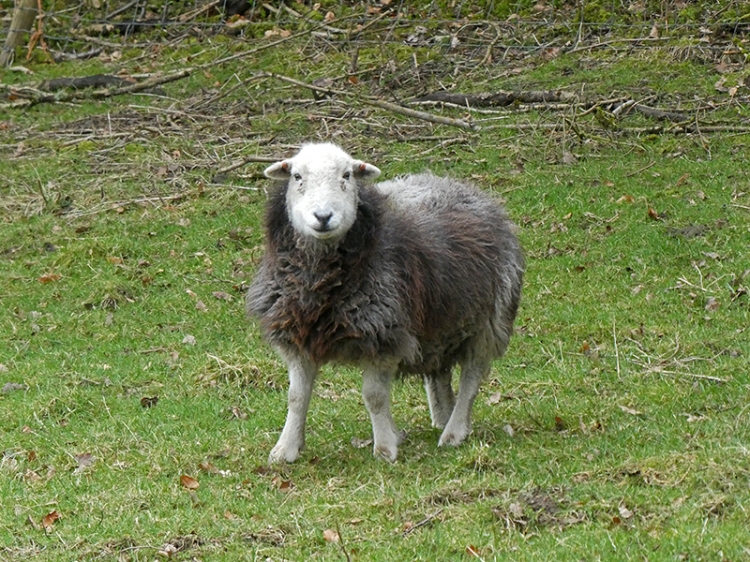 I went along the top of the wood and then dropped down through the snowdrops at Holmhead.  They are still looking good.

On my way back to the lodge, I passed a couple of sawn off tree stumps.  I imagine that recent rain and strong winds had made them unsafe so that they were cut off before they fell down completely.  The inside of the trunks didn’t look too healthy, I thought.

The forecast had been right.  I didn’t have too much time before the rain came.  Unfortunately, because I had stopped to take so many pictures, my time ran out and the rain came on well before I got home.  I stopped taking pictures, put up the hood on my new coat which I had prudently worn, crossed the Duchess Bridge and hurried home….

…stopping only for this lovely burst of blossom beside the river behind the school. 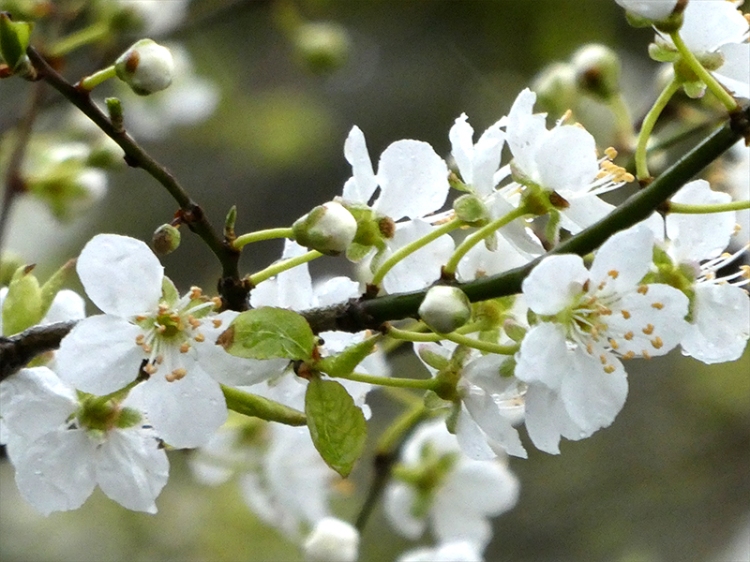 Mrs Tootlepedal had gone out for another meeting so once again, I took the hint from her industriousness and settled down at the computer to tax our car (cost £0 thanks to it being electric) and catch up on some correspondence with two old friends who had  written to me out of the blue.  As I had promised to reply in a couple of days to the one who wrote to me in January , it was none too soon to get to work.  Still, as I hadn’t seen him for nearly fifty years, a few weeks probably wouldn’t make a lot of difference.

Mike Tinker dropped in for tea and Mrs Tootlepedal returned (soaked) from her business and joined us.

Then it was time for flute playing with Luke.  He is between jobs at the moment so he has had time to practise and this has had a very good result.  I will be taking lessons from him soon.

After tea, I put most of a week of the newspaper index into the Archive Group database before turning to the production of this post.  It has been a full day.

The flying bird of the day is an angry goldfinch.