Finally the warm weather arrived in Langholm and when we got up we wondered if the the warmth would bring the tulips out.

And in the end, the race to be first tulip out was a dead heat.

The bergenia was flourishing too. 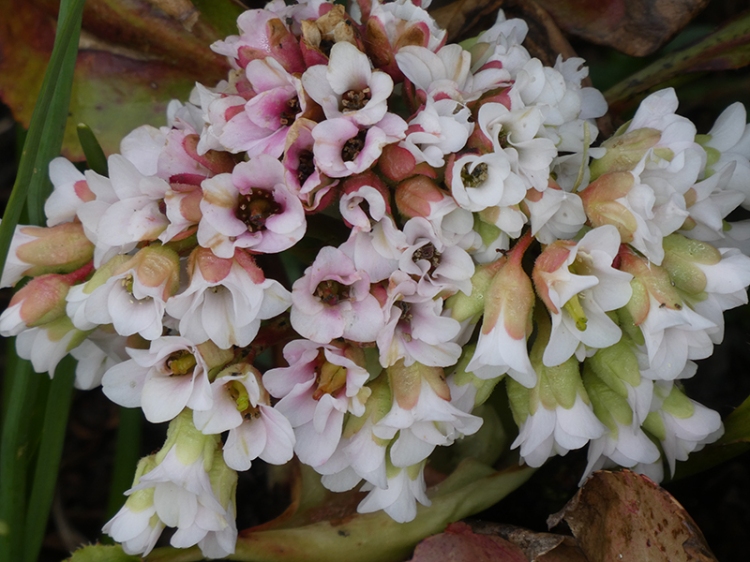 It may have been warm but it was windy too and as the forecast suggested that it was going to get windier as the day went on, I took my permitted exercise fairly early in the day.  It would have been better if I had been earlier still, as it pretty windy by the time that I got out.  The wind was coming from the south so I thought I would try to see how far I could persuade my legs to go before they got fed up.

This turned out to be 15 miles straight down the A7.  The wind was very gusty and I thought that I might be in danger of being blown off course if I went on, so I agreed with my legs and turned across country to came back via the Brampton to Longtown road.  It was not busy. 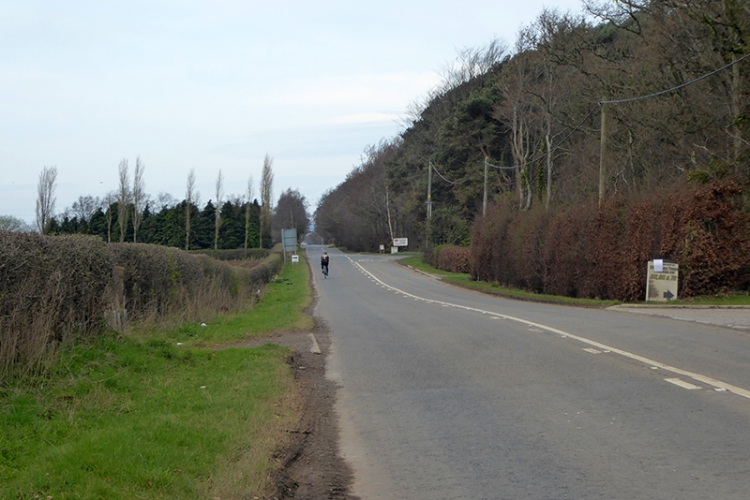 Notice the verges mowed to within an inch of their life with no wild flowers showing at all.

With the wind now behind me, I did the next ten miles at 16 mph and had no trouble in getting up the gentle hills back to Langholm on the A7.  They were not busy either.

I had hoped for more miles but in the end I was content to settle for 30miles in pleasantly warm conditions.  If I could get the same warmth next week with half the wind, I would be even more pleased.

I was back home in time for lunch for which Mrs Tootlepedal had made an extremely nourishing soup.

On a normal sunny, warm day in April, I would now have gone out for an interesting walk but, having taken my permitted exercise, I was stuck in the garden for the rest of the day.

There are worse places to be stuck in.

I had taken a picture of these cowslips before I had gone out in the morning and I took another one now just to show how much the light changes the colours that you see in the flowers. 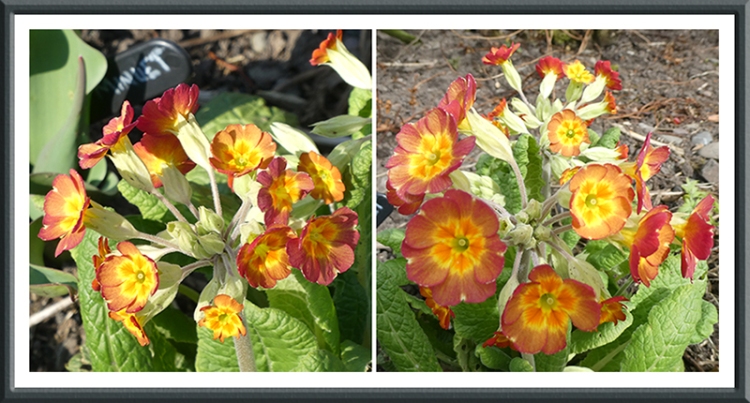 The sun picked out some old friends, including the last of the crocuses..

…and the good light brought out the best in the cardamine. 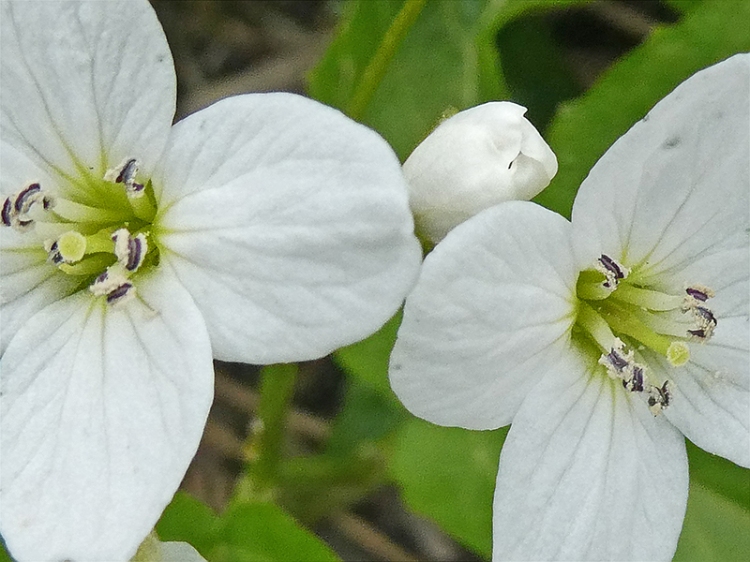 I see that the cardamine is called the cuckoo flower because it is supposed to come out as the cuckoo arrives but I think that we will have to wait a bit before we hear that familiar call.

Mrs Tootlepedal found a delicate skeleton of a leaf and draped it across her sleeve to show it off for me. 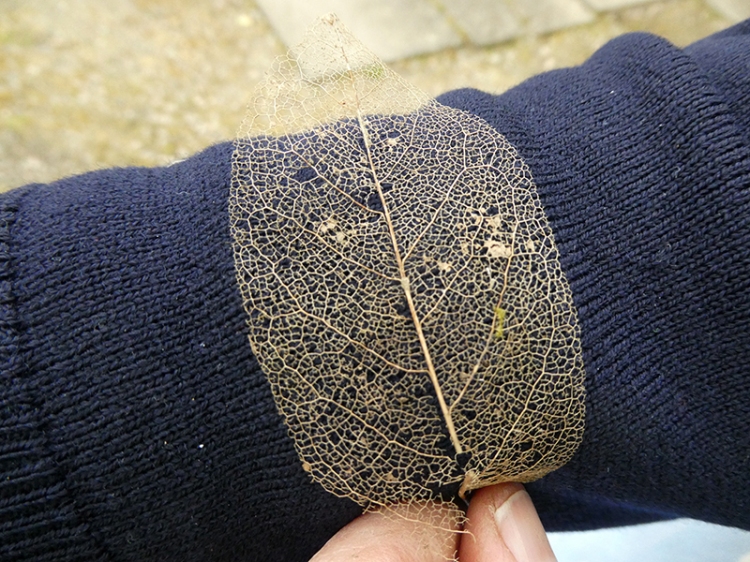 I mowed the middle lawn and then needed a sit down so I tested all the benches in the garden in turn, hoping that garden birds would visit me.

I saw a sparrow getting ready to build a nest.

But I had to get up and walk around to see this small tortoiseshell butterfly warming up its wings.

Mrs Tootlepedal told me that she had seen another smaller brown butterfly, but it didn’t return so we couldn’t check it out.

The dunnocks were very noisy and active again, but this one paused in a tree long enough for me to take a picture.  It was off chasing other dunnocks a moment later.

I sat on the new bench for a while but no interesting birds (or any birds at all) appeared, so I had to make do with the view of the newly mowed lawn adorned with fresh tulips among the daffodils. 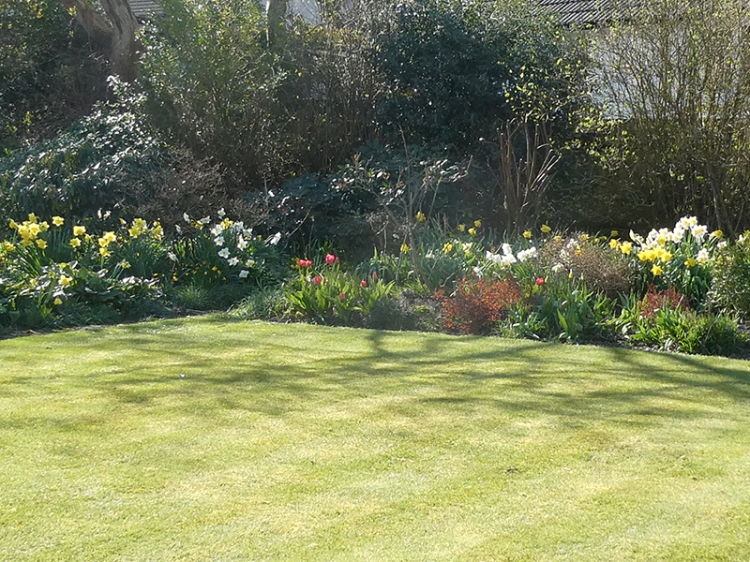 Then I mowed the front lawn for the first time this year.  This involves squashing a lot of moss but there were some blades of grass here and there so once again I hope for the best.  The lawns may, with luck, look respectable by the end of June.

…but lacking any other novelty, I went back to looking at the tulips and daffodils.

The magnolia was brightly back lit by the afternoon sun… 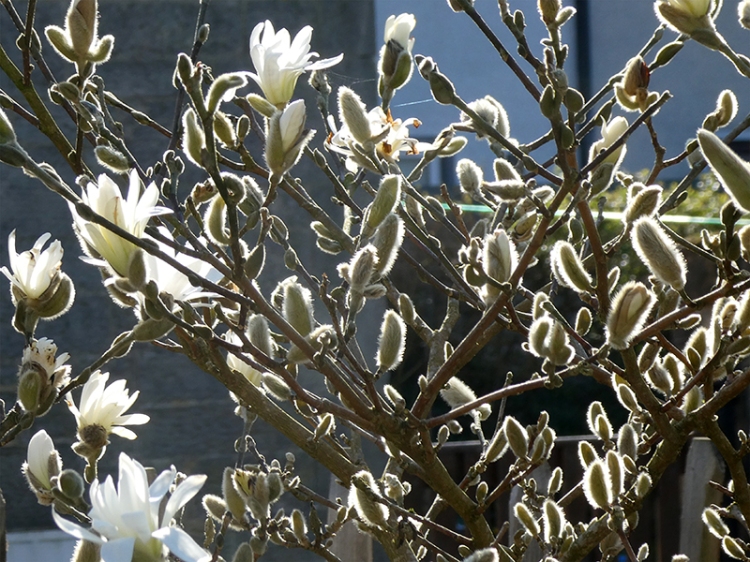 …and it has one or two flowers out. 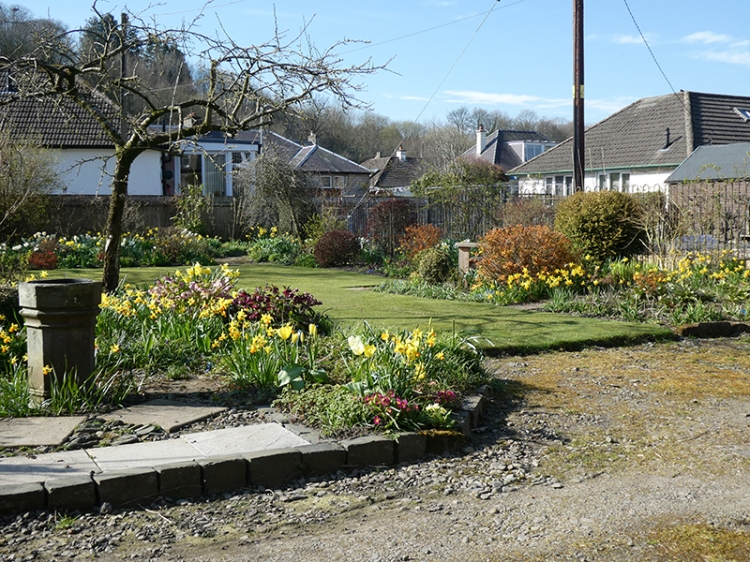 …and then I went inside and upstairs to take the same view from above to give a more general picture of what is probably peak daffodil time. 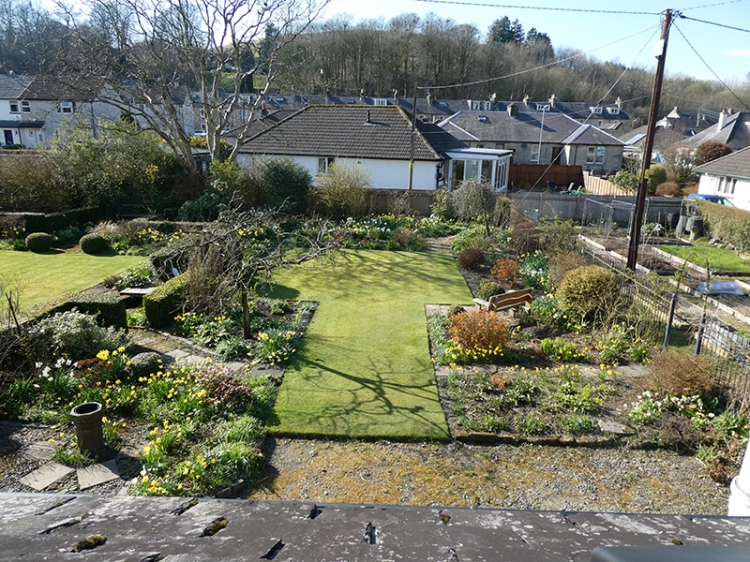 The garden tidy up continued as Mrs Tootlepedal moved the second kitchen waste compost bin to a new position but I felt that it would be too exciting to have a picture of this in the same post as new tulips, so that will have to wait for another day.  (OK, I forgot to take a picture.)

We now have two aubretias out….

…and having recorded them, we went in for a cup of tea and the last of the ginger biscuits.

It was still a lovely day, perfect for a walk but we did our bit and stayed at home.  A collared dove kept an eye on us.

Instead of a walk we had a six way meeting including  my three sisters, my brother and Mrs Tootlepedal and me through the medium of Zoom.  We are all, except my brother who uses it for a language class meeting, pretty new to this so it took sometime before we were all on screen and able to talk.  Then we had to learn not to all talk at the same time but in the end, we managed to have quite a cheerful conversation with added banter.

A lightly boiled egg for our tea finished the active day off.

The flying bird of the day is a rook which flew high over the garden while I was testing one of the benches.

40 thoughts on “Pushed back”