Today’s guest picture comes from our son Tony in East Wemyss.  “Are there any shore birds about”, I asked him.  “Plenty”, he said.  And sent me the proof. 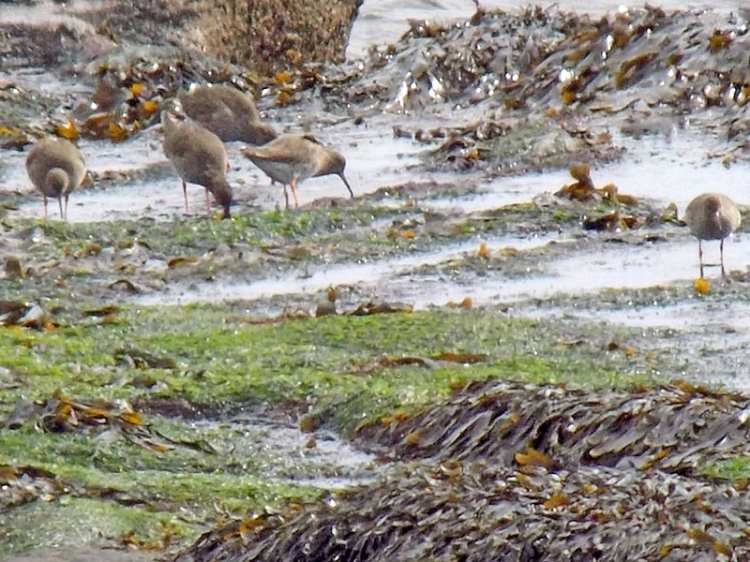 Life in the lockdown goes on in a well ordered pattern of pottering, walking and cycling and today was no different.

After breakfast and the crossword, I made a bright start to the day and went to the shop for milk and eggs before coffee.  Our own (river) shore birds, the oyster catchers, have found somewhere better to be in the mornings but I was able to enjoy a great swathe of Lady’s Smock instead as I cycled home. 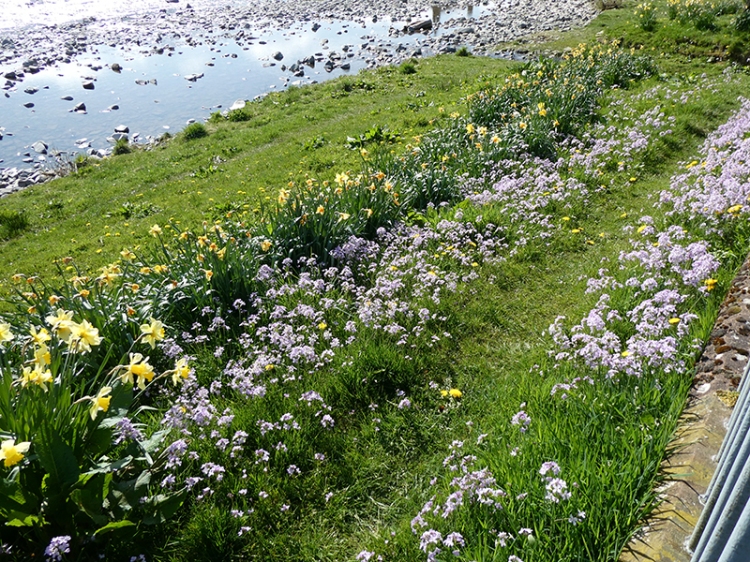 …with promise of more tulips to come. 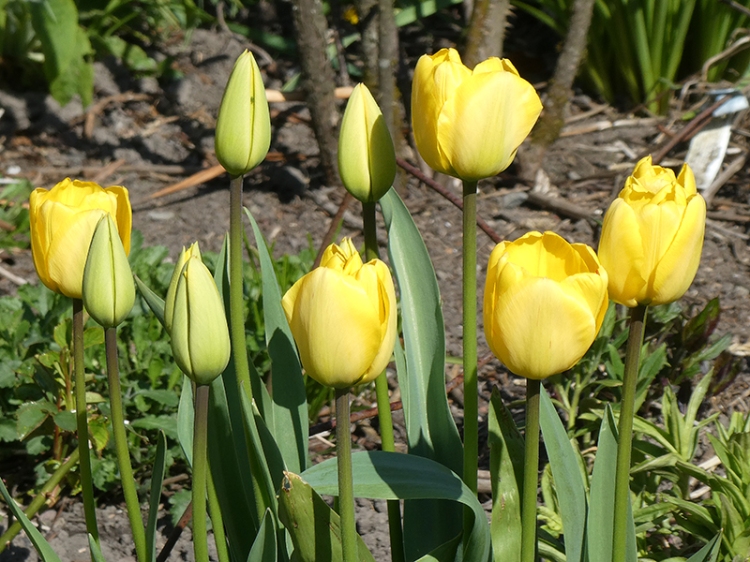 Some tulips were wide awake…

…and others were still snoozing. 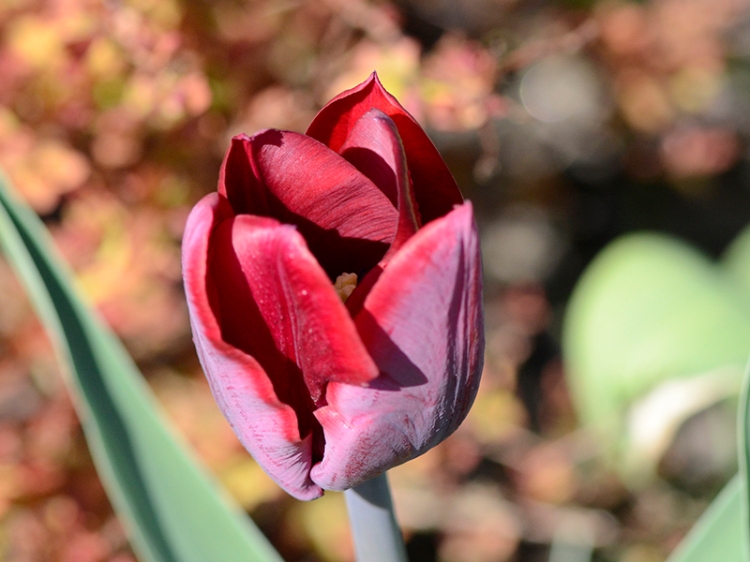 Throughout the morning a small tortoiseshell butterfly flitted about, stopping occasionally to get its picture taken. 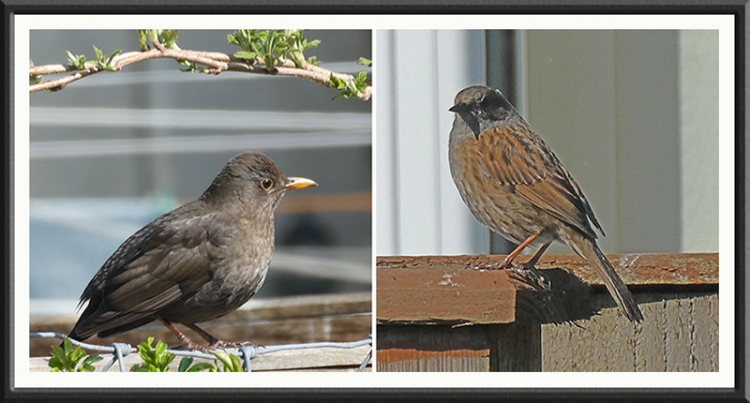 …and pollinators got on with their business.

Now that I have seen one before, I was able to pick out a bee fly  among the other insects today.

Wikipedia tells me that the bee fly’s Sunday name is Bombylius major and it is commonly named the large bee-fly or the dark-edged bee-fly.  It is a parasitic bee mimic fly.

You can see the dark edges to the wing in the picture along with its characteristic permanently long nose.

The sun had brought the Pulsatilla into flower… 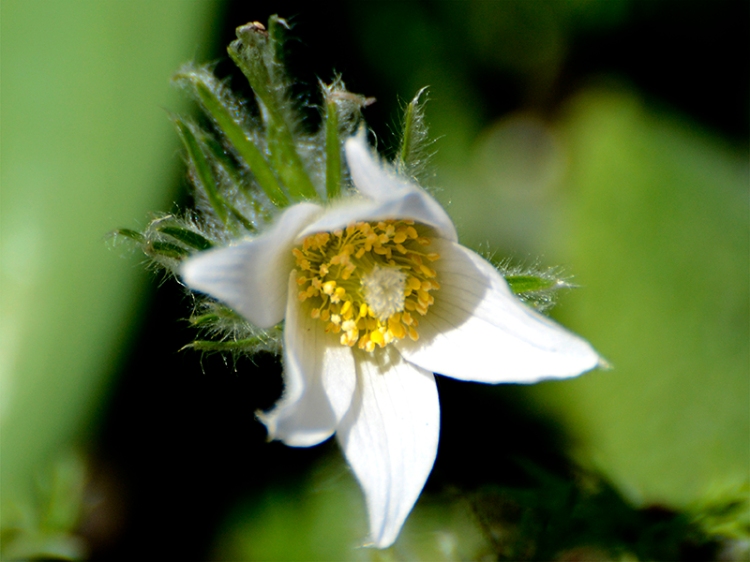 …and encouraged Mrs Tootlepedal to plant out her peas.  These were growing in a gutter in the greenhouse and she used gravity to do the planting. 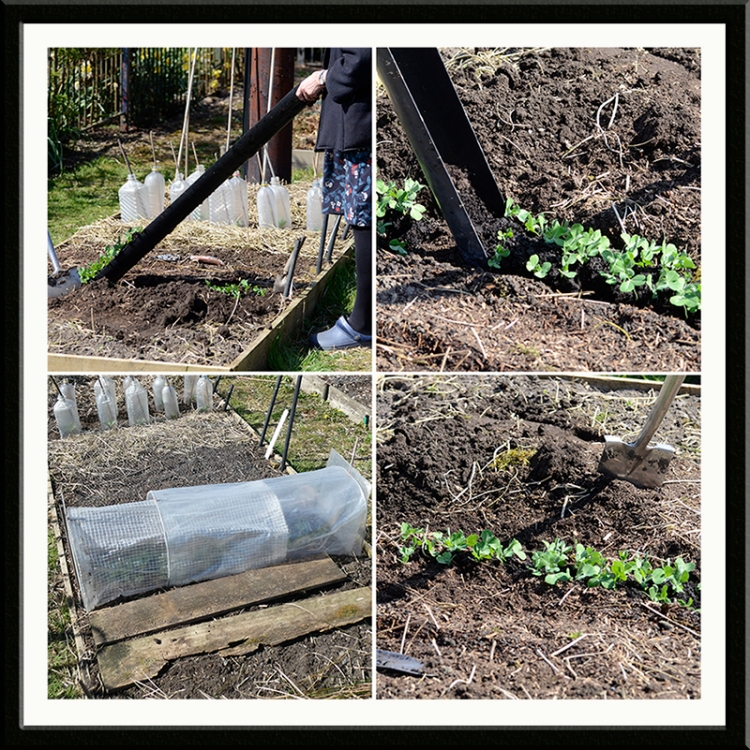 Once they were in place and had been well tended, she put the necessary protective covering in place to keep the dratted sparrows off the fresh shoots.

The bottles in the background are individual mini greenhouses for her broad beans.

I dead headed a lot of daffodils and while we were out, we pruned some dead branches on our lilac tree. 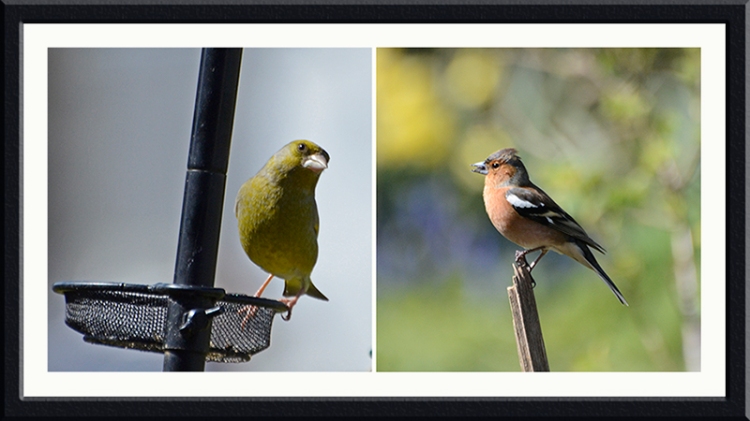 …and the back window, where the ducks were swimming in the dam. 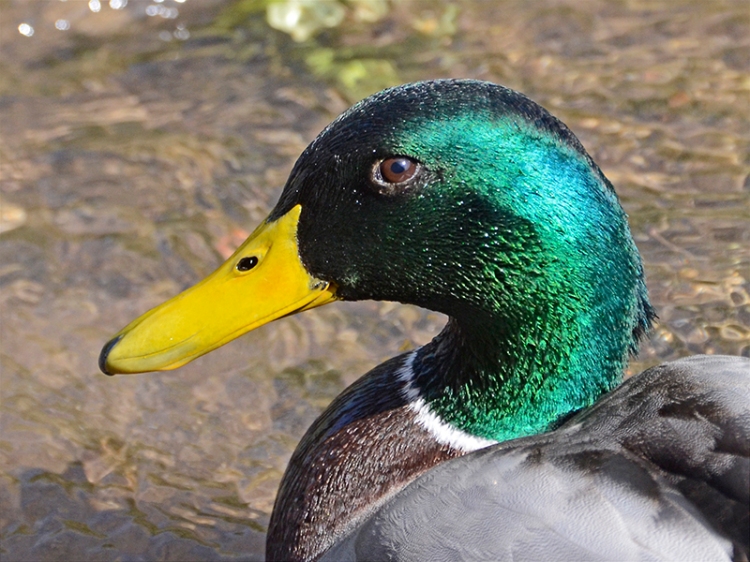 The drake may have the showier head…but the duck has a delightful back. 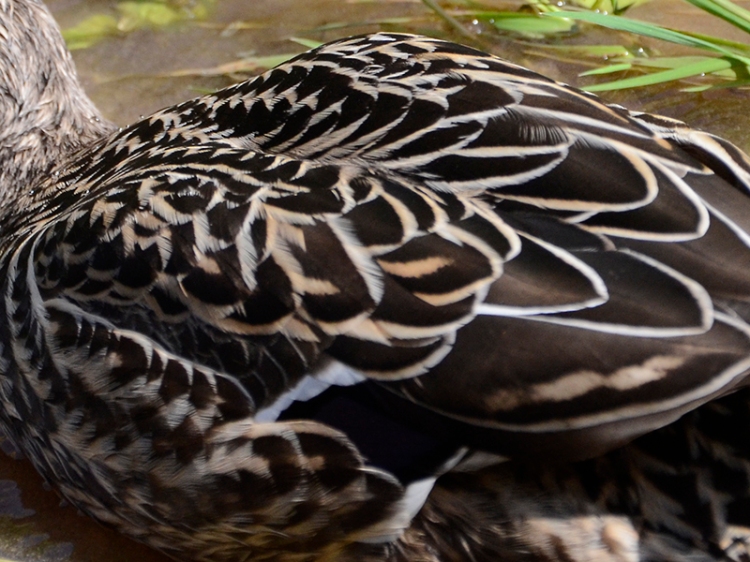 I watched the familiar pair of jackdaws with the white markings come down to the lawn but when I went out for a look, the one with the white feather flew off, leaving its partner looking a bit bemused. 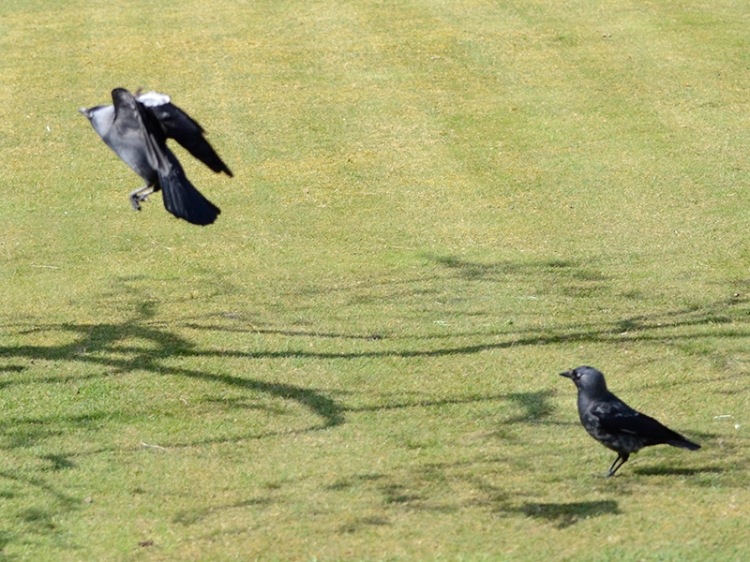 While I was out, I took a picture of the best bunch of tulips in the garden (at present anyway)… 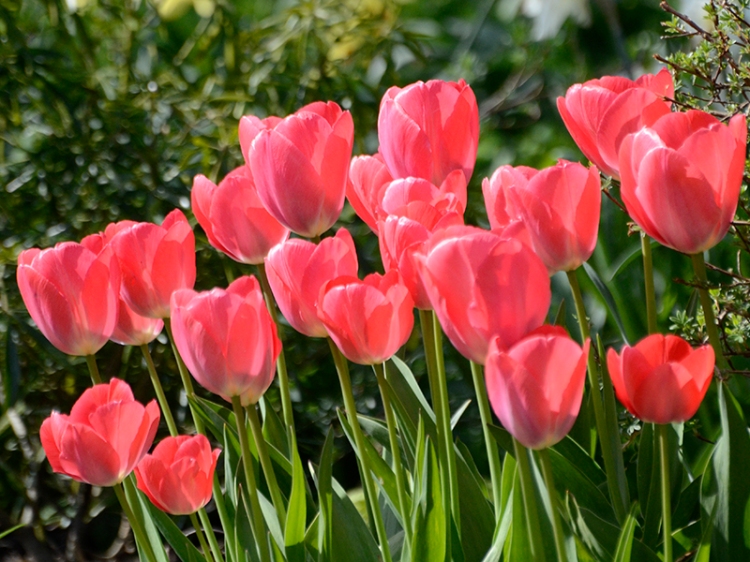 …and went back in to have lunch.

After lunch, I went out into the garden again to cut up the pruned lilac branches and then to sit in the sun and wait to see if anything interesting occurred.

This was life in the fast lane and an indication of the pace of exciting events may be gauged by the fact that I spent quite a lot of time considering the pattern of my trouser weave. 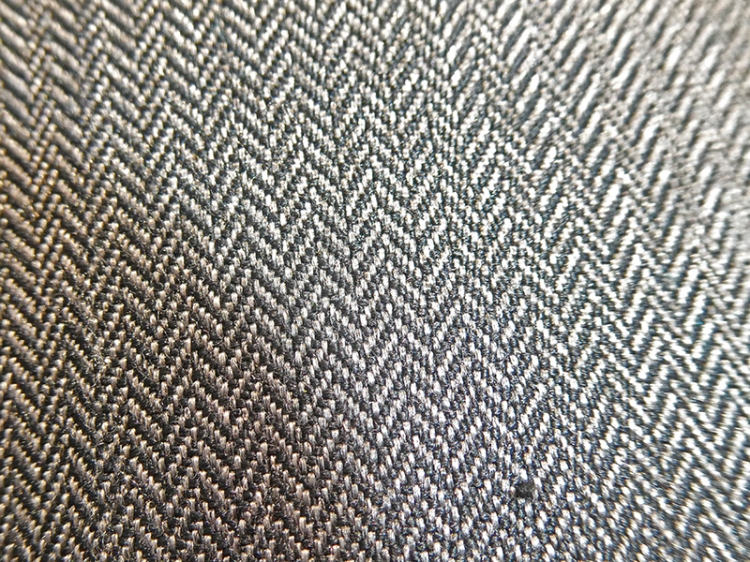 It was windier than the forecast had lead me to believe that it would be, so I put off cycling in the hope that the wind would drop.  I didn’t, so in the end I went out and cycled ten miles less than I had intended.

This was probably a good plan as I enjoyed twenty warm and sunny miles round my usual Canonbie circuit.  I saw some interesting things on my way round but because I was cycling and not walking, I could not record the pheasant and hare that scampered out from under this tree just as I got going after taking the picture.

Nor could I catch either of the two grey squirrels that crossed the road in front of me as I pedalled along.

…though the shelter looks as though it could do with the services of a good window cleaner.

When I got home, I Zoomed with my siblings, eat some excellent mince and tatties prepared by Mrs Tootlepedal and then WhatsApped our daughter Annie and granddaughter Evie.

Exhausted by all this tech, I sank into the sofa.  Later on, some rhubarb and custard revived me enough to get the blog finished.

The flying bird of the day is a chaffinch heading for the feeder.

Footnote: It has been so dry that I watered the lawn today, a very odd thing to do in April.

36 thoughts on “The same again”