Today’s guest picture comes from my sister Mary. She mowed her lawn today but tells me not to look too closely at it.  It looks good to me.

We had another lovely morning and as a result, Mrs Tootlepedal had to spend a good deal of the day watering the garden.  Even after a good soak, things stayed very dry and more watering is on the cards for the coming days.

I went out into the garden after breakfast and poked my nose into tulips. 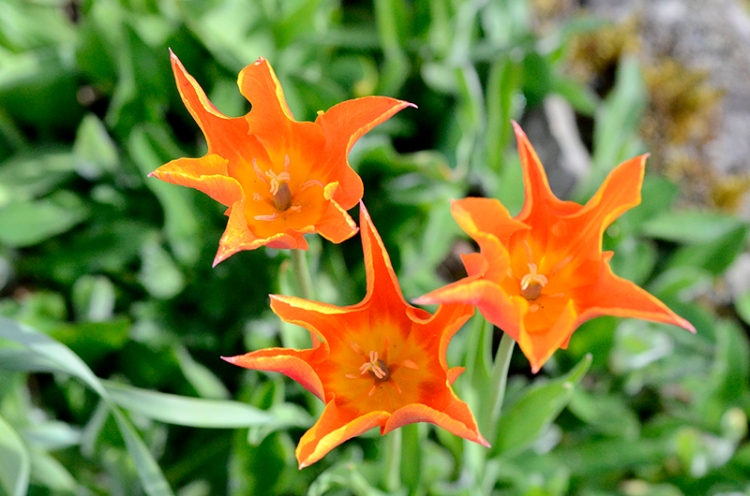 They come in all shapes… 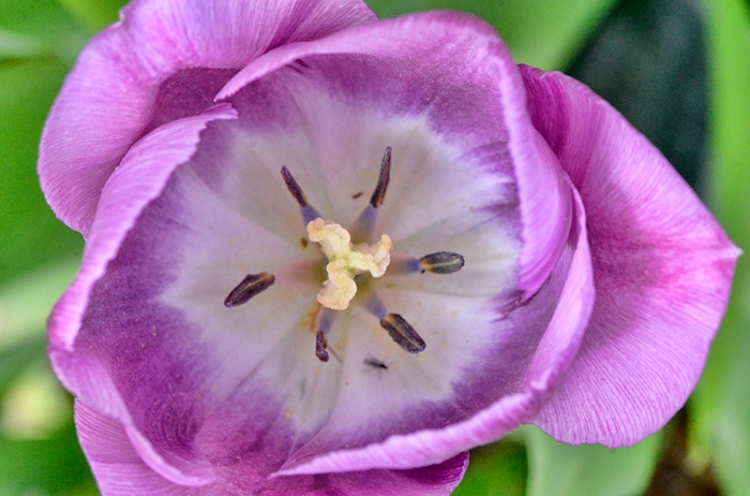 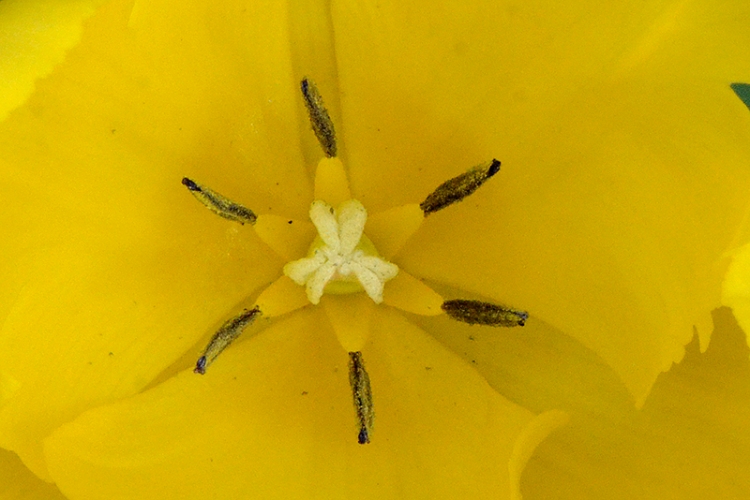 I was pleased to see a Welsh poppy developing…

…and an azalea too, although there are still only a few flowers opened so far.

Willows are a source of endless fascination for me.

Instead of having coffee, I drove down to Longtown to pick up my bike from the bike shop.

The drive was fine as there is still hardly any traffic on the roads but I had to wait for quite a long time before I could pick up my bike, standing physically distanced from other bike enthusiasts, while the reduced bike store staff dealt with a queue of customers.

However, it was my turn in the end, and I packed the bike into the car and drove home.

I didn’t have to pay anything as this was the final after-sales free service for the bike. I have had it for two years so that seemed very generous to me.  I had to pay for a new back tyre though.  Looking at my records, I see that it has covered 6800 miles since I bought it, so the old tyre served me well.

When I got back, I put the Zoe on charge for the first time for ages and then joined Mrs Tootlepedal in the garden.  She has been using compost steadily as she plants things out, so I sieved another barrow load.

Then I wasted time by running the mower over the front lawn.  There was nothing to cut as the grass has simply not been growing through a combination of cold mornings and lack of moisture. The lawn had to wait its turn to get watered but I am hoping to see a little growth soon.

After lunch, I did some high quality procrastinating by wandering around the garden as if I was going to do something useful without actually doing anything.  Then I leapt into action (rather slowly).

It should have been a walking day but as Mrs Tootlepedal is considering a walk tomorrow, I got my newly serviced bike out and went for  a pedal instead.

I wasn’t in the mood for an adventurous ride, feeling rather creaky and a bit tired, so I headed straight up the main road north out of the town for twelve and a half miles and then turned and headed straight back home again.

It started to rain at the very moment that I got my bike out of the garage but I wasn’t alarmed as I thought that it wouldn’t come to anything.  I was quite right, the drizzle stopped half a mile later, and I was treated to some lovely sunshine and shadow as I cycled up the Ewes valley. 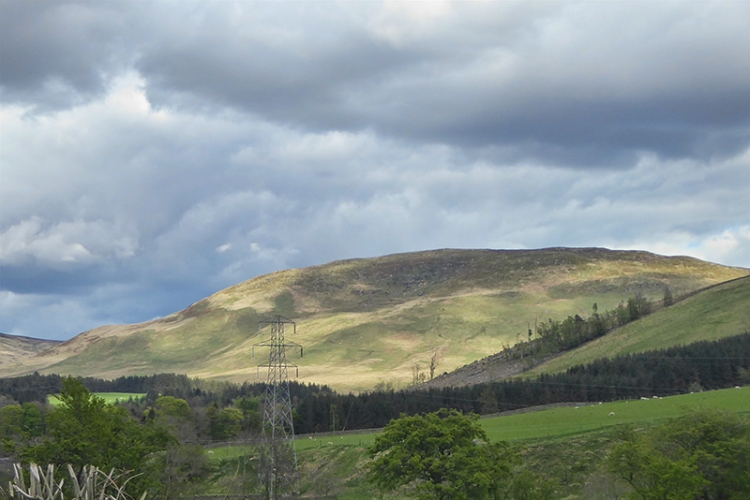 A lot of the land here has recently been sold to a timber company and I could see that work on new forestry has already begun. 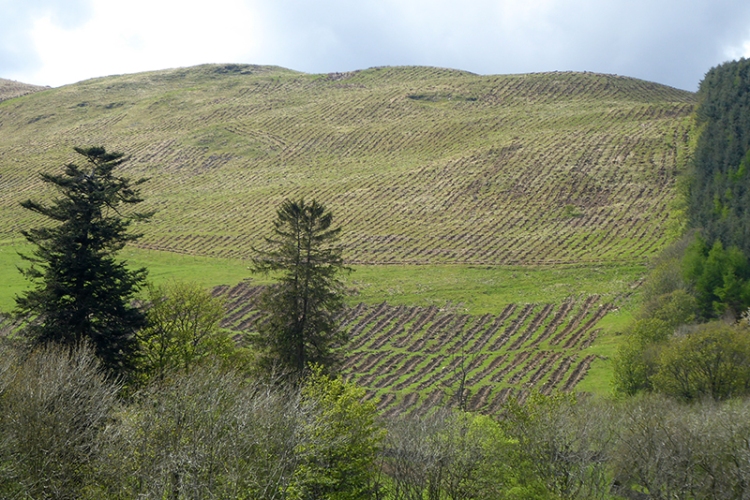 There is a drive for new trees and land has become more valuable for timber than sheep.

I wasn’t always in sunshine myself but there always seemed to be sunlit uplands ahead.

But always some little distance ahead.

All the same, it was warm enough and the wind was light so I did my twelve and a half mostly uphill miles north at twelve miles an hour.

I turned at a quarry beside the road.

The ride out had been so pleasant that I was afraid that I might find the wind blowing in my face on the way back  but it turned out to a cross wind and more behind and in front so I had an easy ride home too.

I stopped for a drink and a cube of guava jelly at Mosspaul on my way back, and once again admired the ability of this tree to grow straight up from a steeply angled bank… 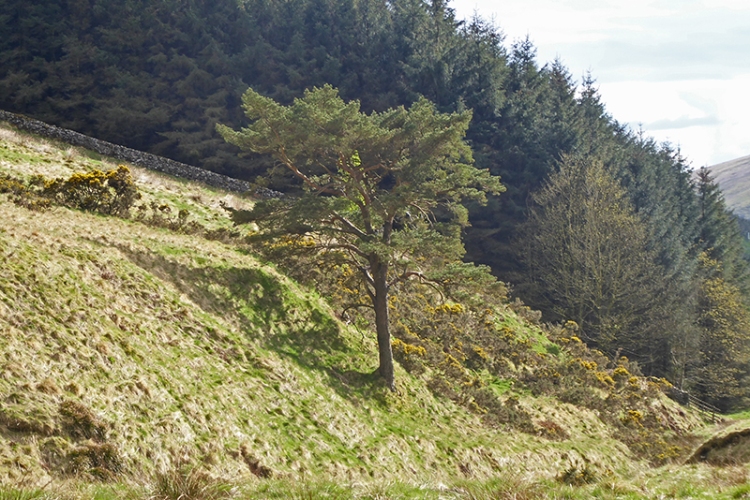 …and enjoyed a the warmth of the sun.  The old Mosspaul Hotel is no longer open to offer refreshment to passing cyclists so I headed back home to get my cup of tea and date roll.

…and had a thoroughly refreshing and invigorating ride, finishing  it feeling a lot perkier than when I started out.  That Dr Velo knows a thing or two.

I got home in time for my daily Zoom meeting with my siblings.  Mrs Tootlepedal joined in for a while and was a useful source of gardening information.

I had a moment after the call and before tea to look out of the window.  Jackdaws have been pecking at my lawn again, and we name one of the guilty parties.

The feeder was unusually busy and a goldfinch and chaffinch gave a sparrow  a hard stare as he tried to move them on. 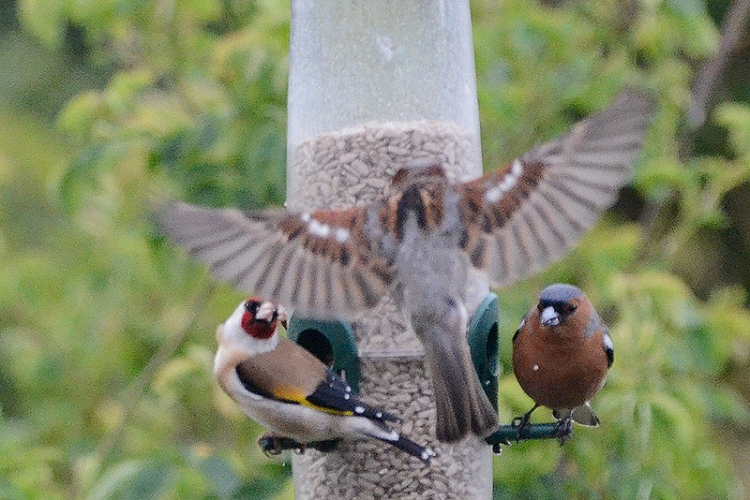 He had to sit at the side until the goldfinches were finished. 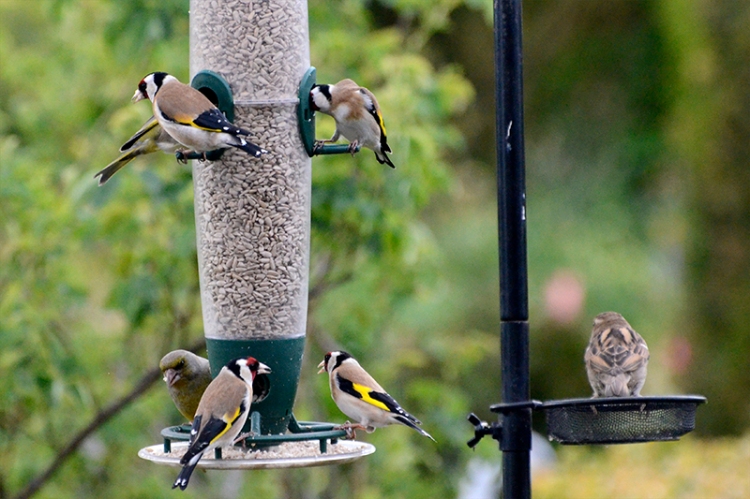 Yesterday’s mince and tatties turned into an excellent spaghetti bol today and as I have enjoyed first rate cheese and delicious dates as well, it has been a good eating day.

After tea, it actually rained properly for ten minutes while I was talking to Dropscone on the phone….and then it stopped!  The weather gods do this sort of thing just to annoy.

The flying bird of the day is a greenfinch talking politics with a friend.

30 thoughts on “Ten minutes of rain”