Today’s guest picture comes from our friend Bruce.  Meeting a stranger while out on a recent walk, he engaged him in polite but socially distanced conversation but found him rather uncommunicative. 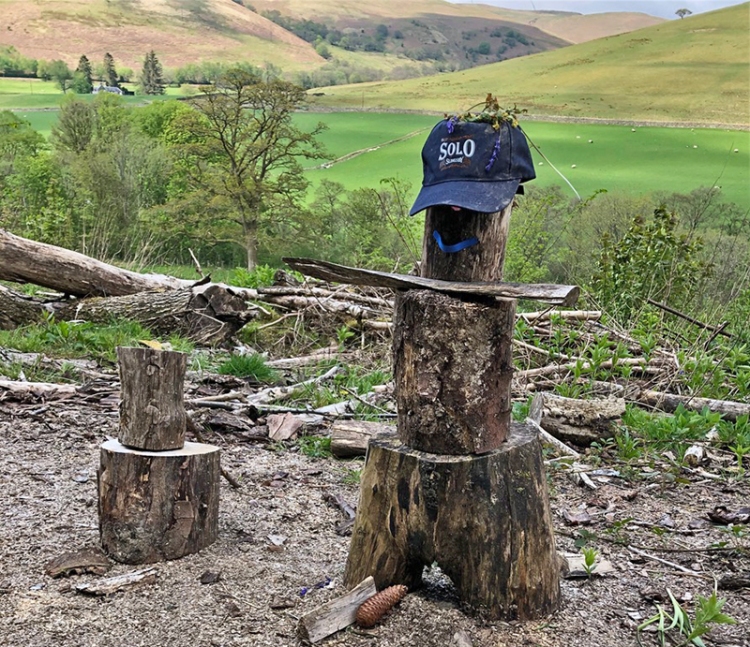 I had a disturbing morning.  We had arranged a visit from our bench supplier to discuss a modification to the new bench and he arrived at nine in the morning.  This seriously upset my normal routine of letting breakfast, the newspapers and the crossword run almost seamlessly into getting dressed just before coffee time.  As a result of being dressed and shaved so promptly, I had two hours of wandering around wondering what I was supposed to do before we even got to coffee.

I did go out and look at flowers.   They were not hard to see. 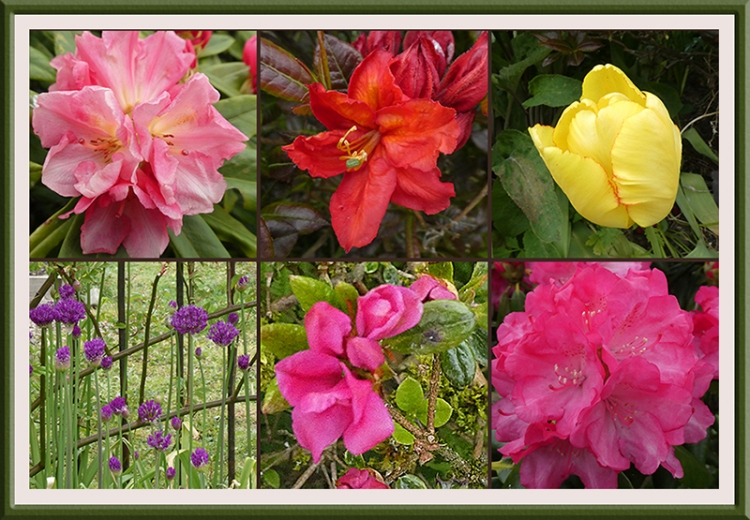 It was another decidedly chilly morning with a brisk wind so although we had our customary socially distanced street coffee morning with ginger biscuits, it didn’t last as long as usual, even in the sunshine.

Someone remarked that our tulips are nearing the end of the road, but they are not going out without a final show. 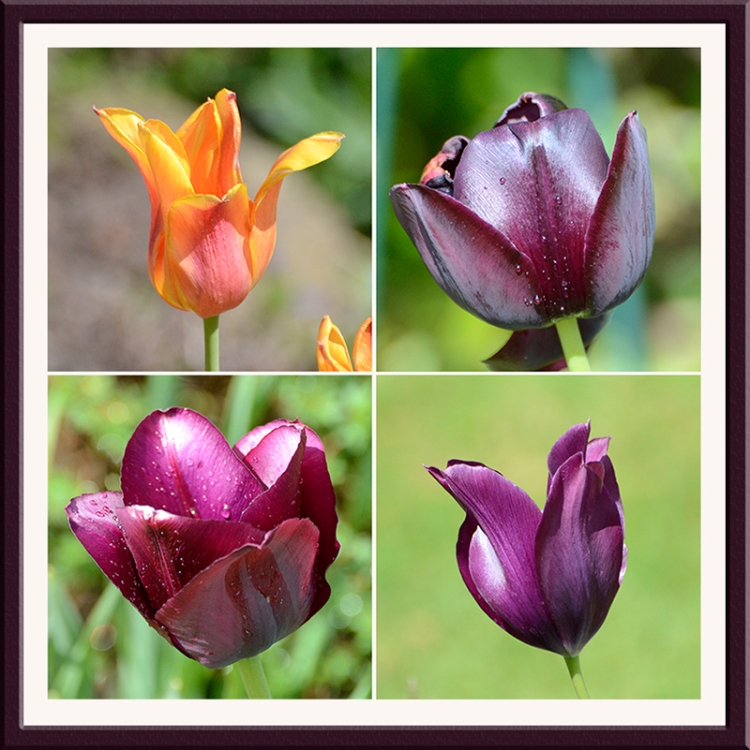 The droplets on the petals are not rain but more of the endless watering that we are doing every day.

New flowers are coming to replace the tulips so we won’t be wanting for colour.

My favourite flower of the moment is the aquilegia.

…and an assortment of other birds posing round the garden.

The birds that were making the most noise were baby sparrows clamouring for attention from their parents.

A young blackbird was less successful.

After lunch, I went for a cycle ride.  This was a surprise to me, as the brisk chilly wind in the morning had been enough to make me think of having a day off.  It had warmed up under the sun though, and the wind had eased off quite a bit by the afternoon with the result that taking a spin up the main road north of the town felt like the right thing to do.

This was a good decision, with the Ewes valley looking at its best… 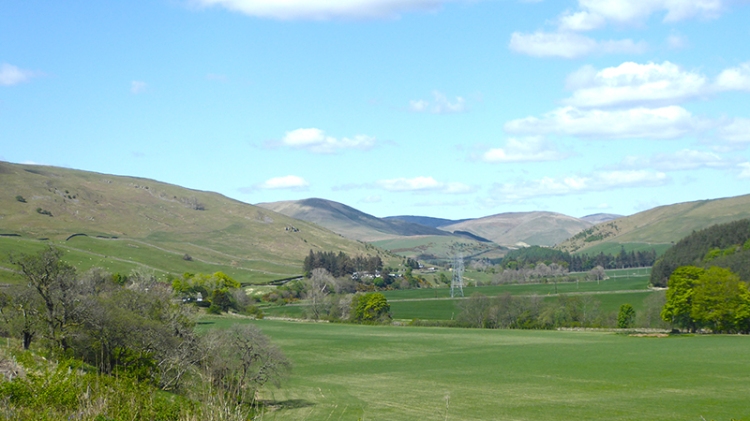 …and Ewes Kirk, pretty as a picture when framed by green leaves.

…and I think that you may well agree that there might be worse roads to be cycling up. 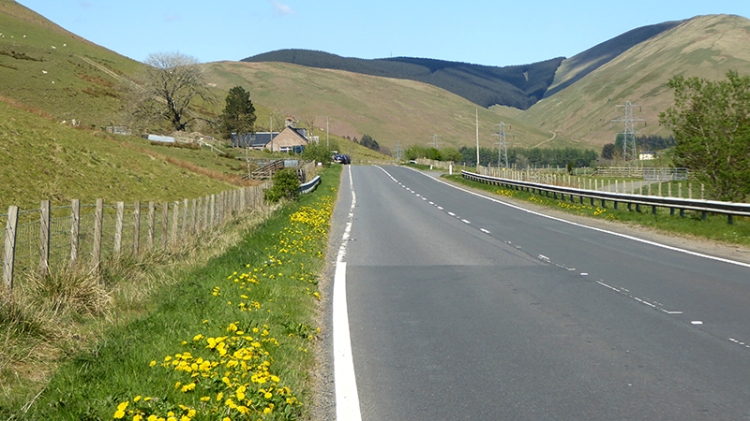 There was a bit more traffic than there has been lately but it was still pretty peaceful.

I cycled 15 miles north into the wind, and this brought me to the bottom of the hill that has this strange conical monument to the local poet and minister Henry Scott Riddell on it. 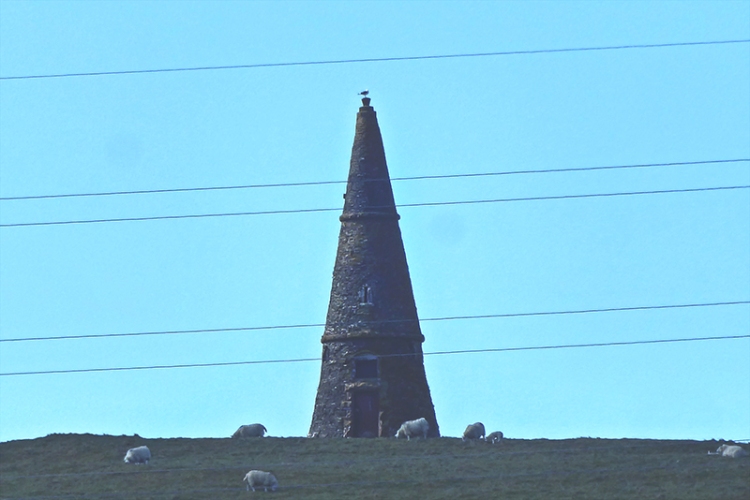 The people who spoil views with power lines have done superb work here!  And yes, that is a gull perching on the very top of the monument.

The return journey, with the wind behind, was glorious.

At one stage I was bicycling up a gentle hill though wooded country at exactly the same speed as the wind was blowing.  There was no a whisper of wind in my ears. The road surface was newly laid and silky smooth.  My bike has a superior hub gear and a belt drive so it has none of that loud clanking that goes with a chain and derailleur gear.  There was no traffic.

The upshot of these happy coincidences was that for a good few hundred yards, I was pedalling along in complete silence, in a world of my own, entirely at peace.

And then there was the rush down hill for the last ten miles of the trip, accomplished in just over half an hour.  What fun for an old man.

After a slightly unsatisfactory Zoom meeting bedevilled by technological mysteries and a very satisfying meal of scrambled eggs, baked beans and fried potatoes, the second shock to my well drilled lockdown life occurred.

The powers that be have decreed that we may now go out more than once a day for exercise, so Mrs Tootlepedal and I drove up to the White Yett car park and walked up to the monument.

We had coats and gloves with us but while the sun was out, it was warm enough to keep the gloves in our pockets. 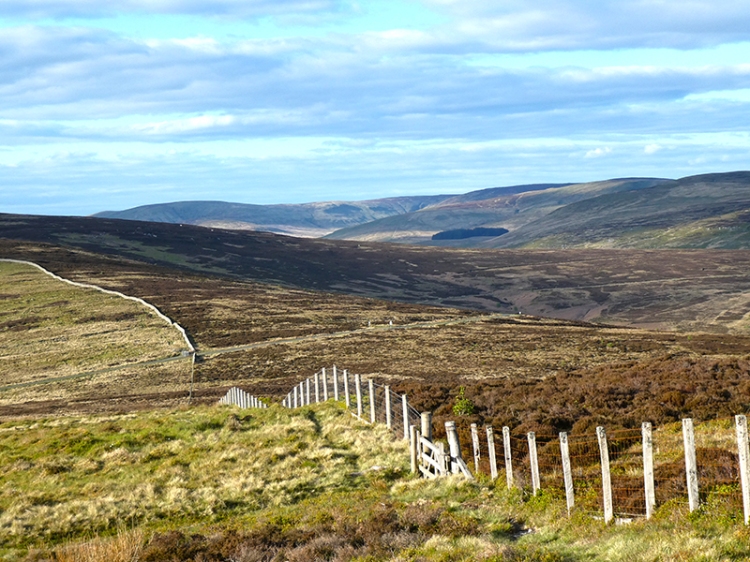 …but we were totally unprepared to see a bird of prey sitting on a fence not far in front of us.

Although it sat and let us watch it for some time, it was too far away for a definite identification, but looking at the picture when we got home, we think that it was a short eared owl rather than a hen harrier.

When we got to the monument, the view over the town was a reward for the climb…

…but Mrs Tootlepedal hadn’t come up here to see local views.  Her ambition was to take advantage of the currently unpolluted skies to see if she could see the Isle of Man, eighty miles away.

Quite amazingly, she could.  It wasn’t the clearest sighting but with her binoculars, the island could be seen.  She gave me a go, and I could see it too.

My camera was quite a bit less sucessful!! 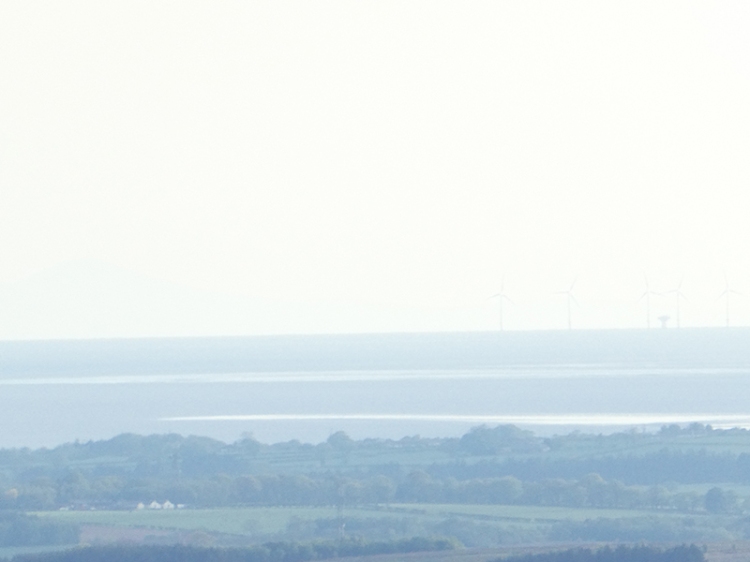 It’s out there somewhere.

It had better luck looking at the Lake District hills which are a lot closer than the Isle of Man.

The sun had gone behind clouds by the time that we walked back down the hill and it had got quite chilly.  A sheep suggested that we shouldn’t hang about.

The shades of night were falling fast as we got back to the car.

Thanks to the wonders of technology, we are in constant communication with our families so we will be quite happy to remain very vigilant and homebound for the foreseeable future whatever the government may say.  The second daily outing for exercise will be welcome though.

The flying bird of the day is a lark which we saw on our way down the hill this evening.

You don’t believe me?  Here it is. 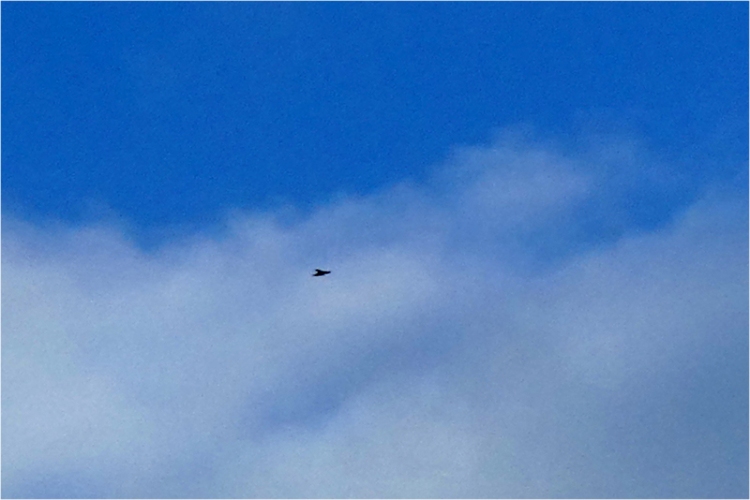 You can spot it in the middle of the big picture just below the line of blue sky if you look very, very carefully!

In the end, it was not the early rise or the second walk that was the biggest surprise of the day.  It was putting that failed picture of the view towards the Isle of Man into the photo editor and finding out what the camera had really seen.

Now that was a surprise.

30 thoughts on “Shaken (but not stirred)”