Today’s guest picture comes from my sister Mary who extended her permitted walk as far as Regents Park where she enjoyed the rose garden. 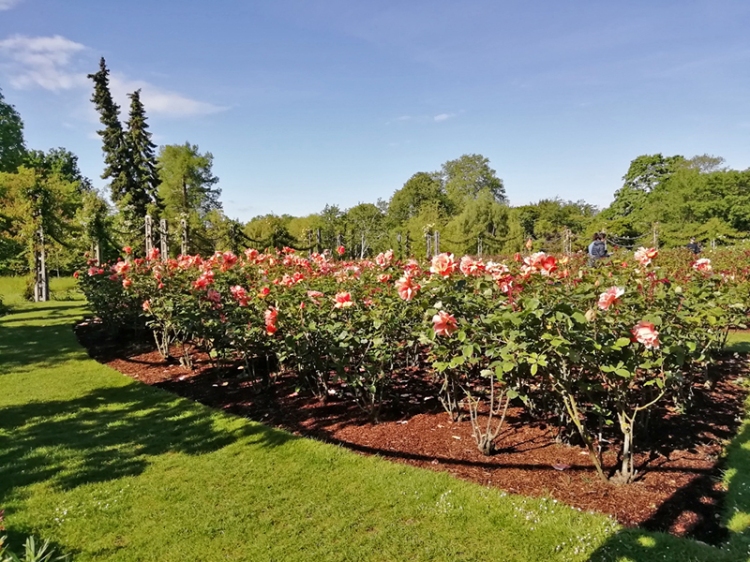 We had a warm and sunny day today with light winds.  Days like this are to be treasured.

The star in the garden was the first peony, beating the tree peony easily.

A lot of our ferns suffered badly in the frost but some of them have shrugged it off and are doing very well. 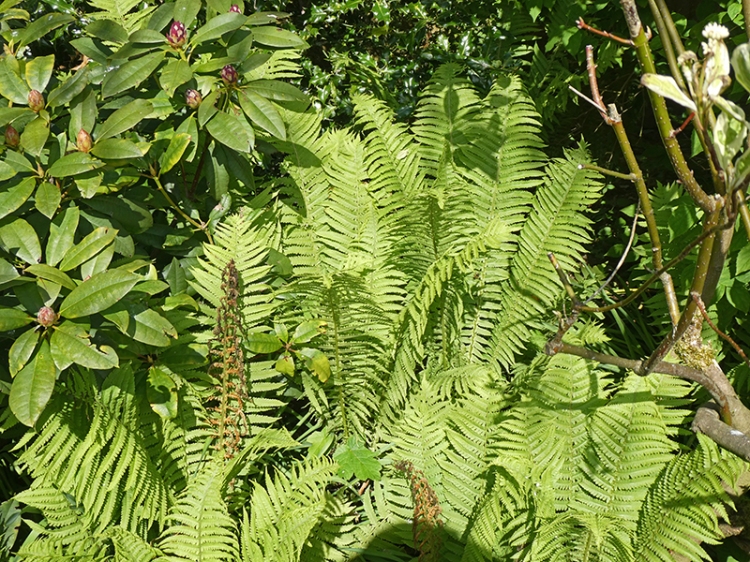 I saw an orange tip buttefly in the garden but it flew off leaving me to watch this white butterfly on the sweet rocket instead.

After the rain, the garden is looking quite healthy but there is a notable gap in the far corner which should be glowing with rhododendron flowers. 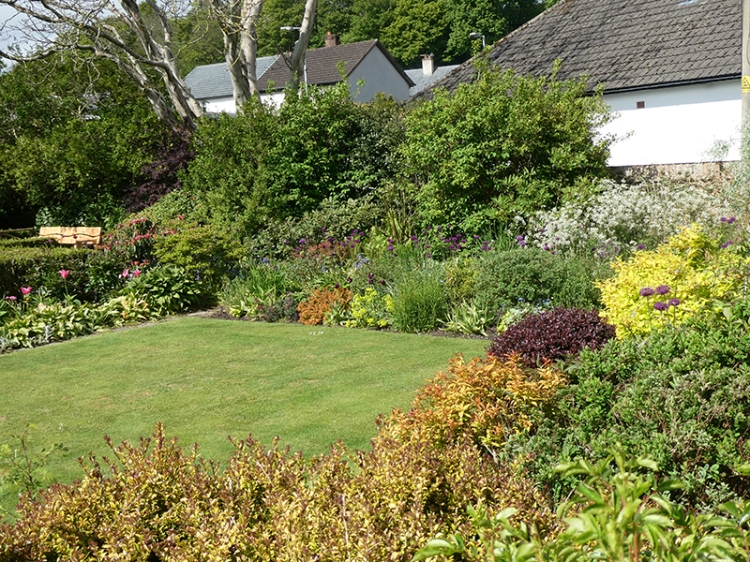 All the same, there is colour to be found, so we are not crying too much.

You have to look hard to spot this camassia though as it has got itself hidden behind taller plants. 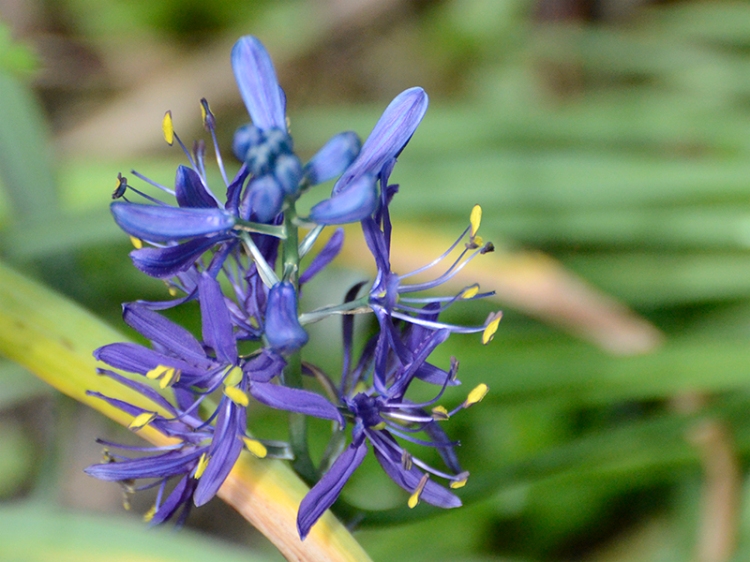 The final remaining set of tulips looks set to last for ever.

The garage clematis is getting more flowers out every day and will soon be in full bloom. 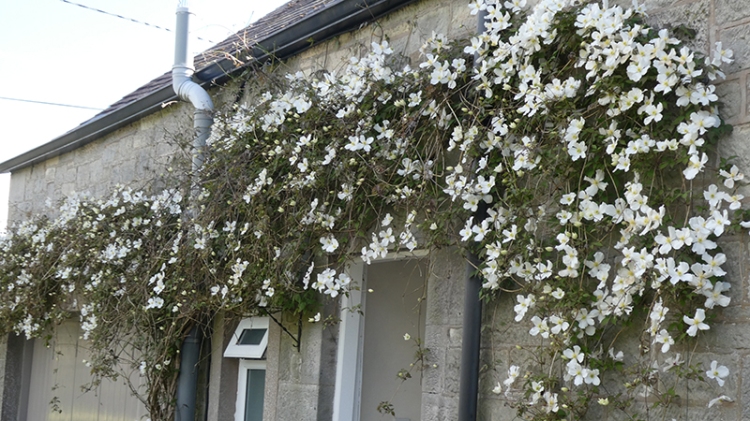 Partly because I thought that it was Thursday (a lockdown category error that is quite common) and partly through natural indolence, I didn’t get my bike out to make full use of the good day until after Mrs Tootlepedal had gone out to her street coffee morning.

However, once I got going, I enjoyed myself a lot.

It was a perfect day for a pedal…

…and instead of my usual little circle starting up the Wauchope valley, I headed up Eskdale today, crossed the Black Esk by this bridge…

…which is one of my favourites, not because of the beauty of the structure but because of its placing in the surrounding landscape.

Once over the bridge, I followed the White Esk through Castle O’er and up to Eskdalemuir.

Like the bridge, this little road is one of my favourites too with interesting verges (the butterfly would not give me a side view….

…and some lovely woods.

The climb lasts for a mile and goes up just under 300 feet.  You get good views back as you climb out of the valley, but the camera does not do justice to the amount of puffing I had to put in to get the view in my opinion. 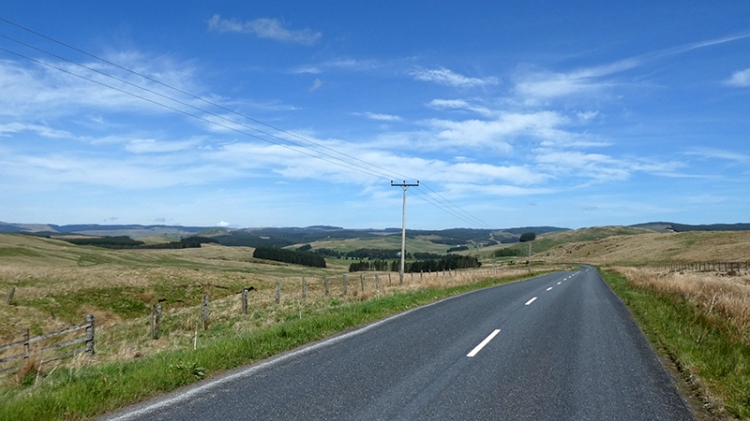 T was heading towards Lockerbie and passing through timber country.  The forests here grow, get cut down and grow again at a dizzying pace.  I was passed by a dozen timber wagons going to and fro.  It is a highly organised and mechanised business these days.

Having crossed the Black Esk, I got a welcome spell of downhill as I descended into the  valley of the Dryfe Water which is cattle country.

I expect that many if not all the loaded timber lorries were heading for the huge timber yards at Steven’s Croft where I passed the country’s biggest wood burning stove.

Once I hit the old main road at the power station, I turned south and headed for Gretna, passing this fine lake of buttercups outside Lockerbie on my way… 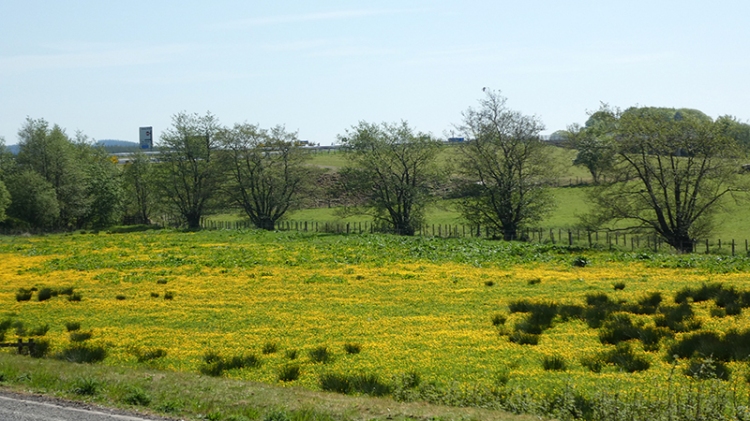 …and stopping to admire the motorway bridge over the Water Of Milk from the bridge on the old road.

Peering into the shadows under the bridge, I could see extensive works, designed perhaps to let fish go up stream over a weir.  Today there was hardly enough water coming down to cater for a tadpole.

The cycling was now pretty flat, which was a relief to my knees and I stopped from time to time to admire flowers by the road.  The red tree on the right of the panel is a red horse chestnut, I think.

I had an interesting route mapped out in my mind for the English section of my trip when I had passed through Gretna going south, but it dawned on me as I pedalled along that the bridge at Longtown (my proposed homeward route) was shut to all traffic as it is undergoing repairs.  I wondered if it would be open to a pedestrian pushing his bike but decided not risk it, and rather tamely circled round and cycled back up to Gretna again before approaching Longtown on the north side of the bridge.

The old gravel pond there, with a fine hawthorn on its bank, looked positively Mediterranean today.

By this time, my knees were getting slightly mutinous and home and a nice sit down came into their conversation quite a lot, so I stopped taking pictures and concentrated on knocking off the final fifteen miles of route with as smooth a pedalling style as I could muster.

It has been my ambition in recent years to have at least one cycle outing each year that covers as many miles as I have had birthday.  I was born in November 1941 and my route covered exactly 80 miles today, leaving me with a couple of bonus miles in hand.

I got home in time to enjoy an evening meal of liver cooked with carrots and spinach from the garden, provided by the industrious Mrs Tootlepedal.  She had been busy in the garden while I was out.

It was a warm day today but one of the joys of cycling is that you provide your own cooling breeze as you go along and I found it very comfortable.  All the same, I lost four pounds on the jaunt in spite of eating three bananas, a satsuma, a small honey sandwich, several dates and some guava jelly.  I drank about 900ml of water too.   In normal circumstances, I would have organised a stop half way round to enjoy egg and chips at a cafe or pub on a ride of that length.

I didn’t have much time to watch the birds but a very obliging sparrow flew into shot as I was going for my shower.  It is the flying bird of the day. 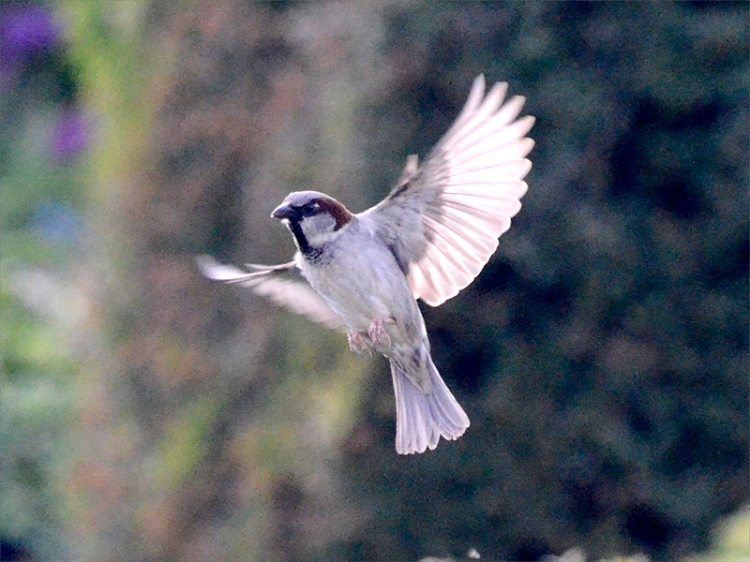 I append the map of the ride.  I carefully organised all the climbing at the start of the route!

30 thoughts on “Acting my age”