We went for a holiday in France with the cycling part organised for us by Cycling Languedoc.

We got a lift from Langholm to Carlisle from our friend Mike Tinker which was a good start to our journey.  We made the most of our afternoon and evening in London by having afternoon tea with two of my sisters and an evening meal with my daughter, her partner and his parents.  Both of these were enjoyable occasions.

We left St Pancras at 8 am the next day and arrived in Nimes at 3.30 pm. This seems to me to be almost miraculously quick even allowing for a time difference of an hour on the way.

It was ominously grey when we started but by the time that we got to Nimes, the sun was out and it remained stubbornly so for all the rest of the days that we were in France.

We had time for a quick look round a bit of Nimes before meeting our tour organisers.

After we met our tour organisers and checked out the hire bikes (Scotts, very acceptable) we went for a drink with a friendly blogger, Susan (she takes lovely pictures as well cycling for miles and miles and miles) and then we all went out for a meal at the Jazz Cafe in a big square…

…which looked even more impressive when floodlit as we came out of the café after a good meal.

We retired for the night to a very comfortable bedroom in the Hotel Imperator.

Day One of the Cycling:

After a splendid breakfast in the Hotel Imperator, we set off through Nimes heading south.  This meant that the wind was behind us and we were full of the joys of cycle touring.  Gerry had given me a Garmin with our routes pre entered on it and even with my aged eyes, I was able to pick out our roads quite easily.

After clearing the suburbs, we cycled through gentle country until we were halted in our tracks by the need for a cup of coffee.  We stopped at Générac, the first of many charming towns we encountered.  It had a cafe and a town hall so it was obviously a place of importance…

…and a good looking church as well.

The clouds in the pictures above didn’t amount to anything and after coffee, we continued to cruise south until we came to Saint-Gilles.  This was the first of the older villages that we cycled through.  It has a fine abbey church…. 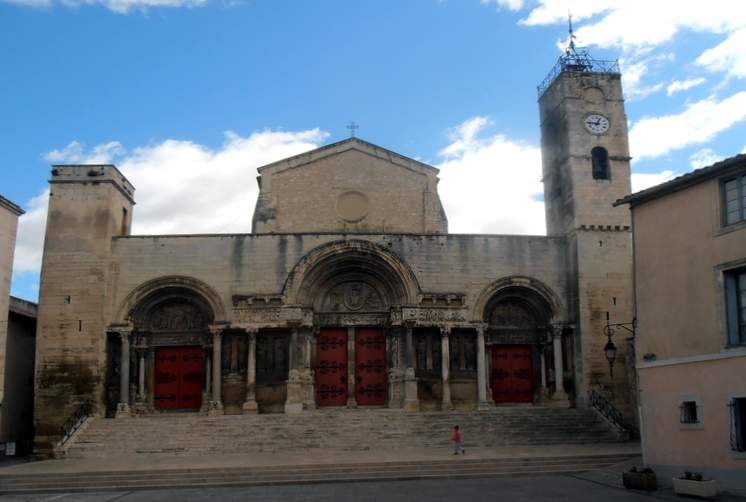 …looking quite plain at first but with a great deal of ornament on closer inspection. 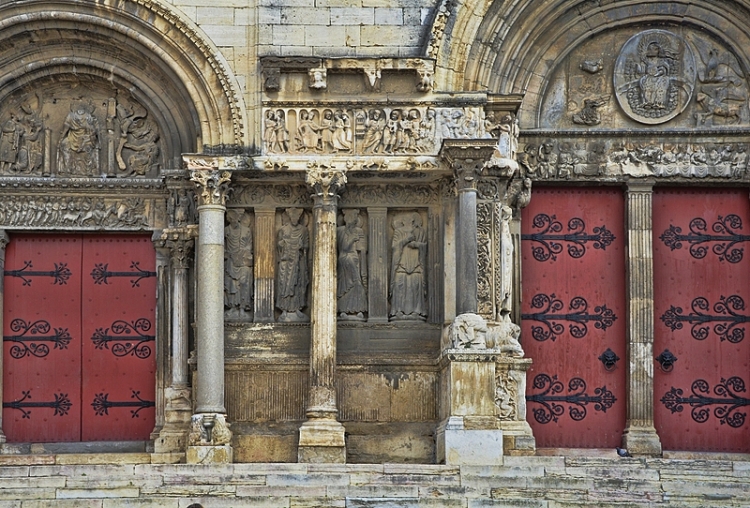 There was a sign to a Roman house museum down a back alley but whether this…. 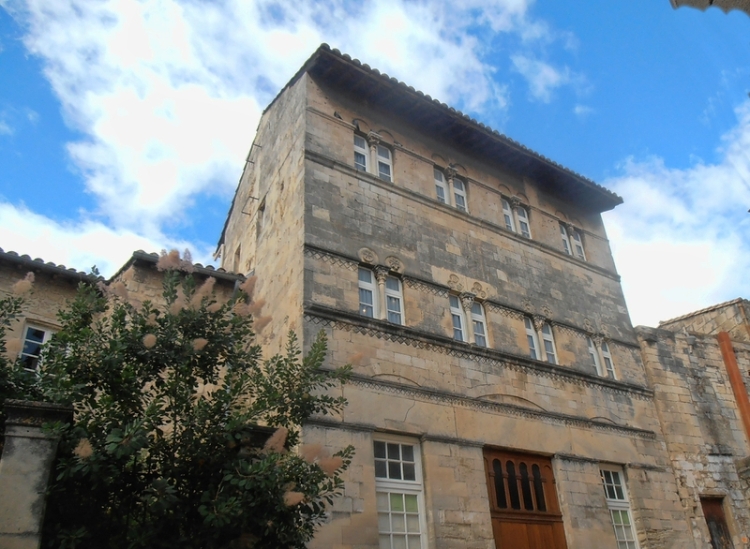 ….was hard to tell as everything looked pretty ancient.

Leaving the village, we swooped down hill until we met the Canal du Rhône à Sète… 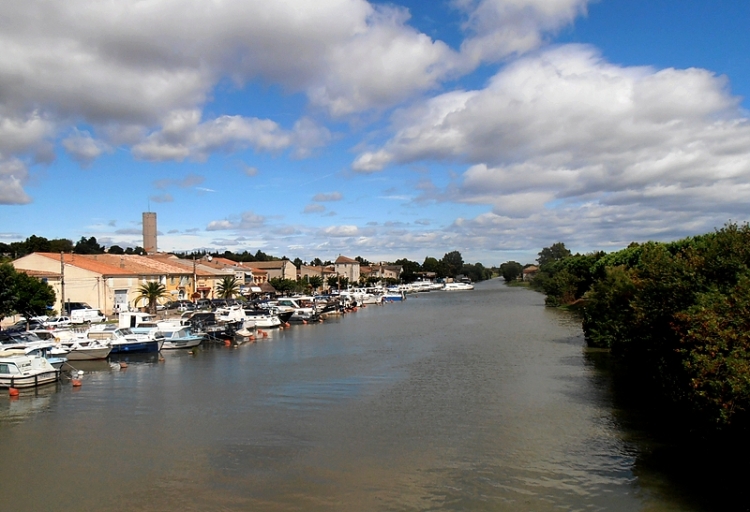 …which a bit of research tells me doesn’t go to the Rhone at all but to the Petit Rhone.    We had our lunch a few yards from the Petit Rhone, which seemed quite large to me. 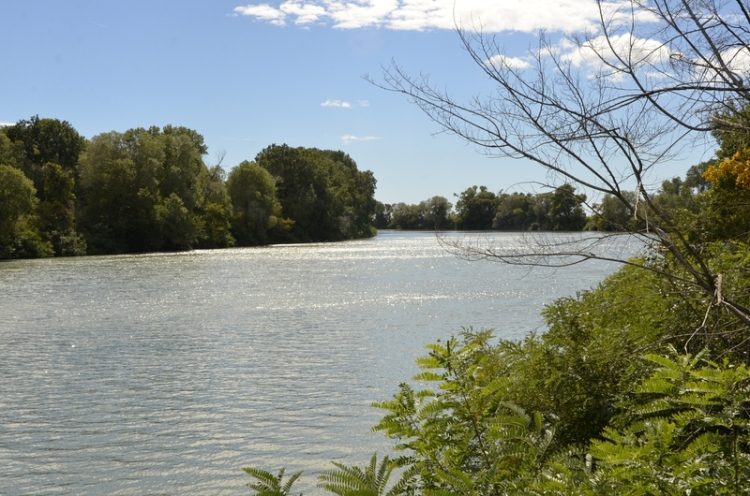 Mrs Tootlepedal took a well earned rest after lunch while I roamed about looking at the river. 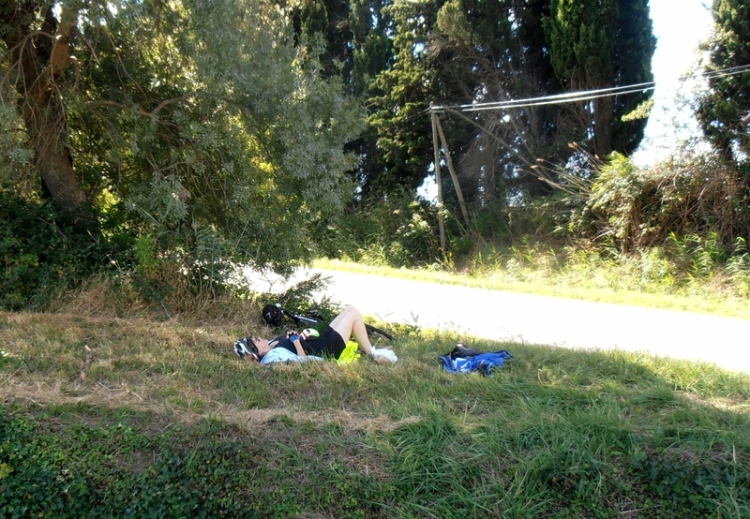 She was glad of the shade because the sun was quite hot by now.  We were now in the Petit Camargue but our road was sheltered by hedges and small woods and we didn’t see any of the etangs as we went on.  We did see Gerry and Susan who were returning from dropping off our luggage at Aigues-Mort.  Nimes is a big bull fighting town and there were many black horned cattle in the fields. 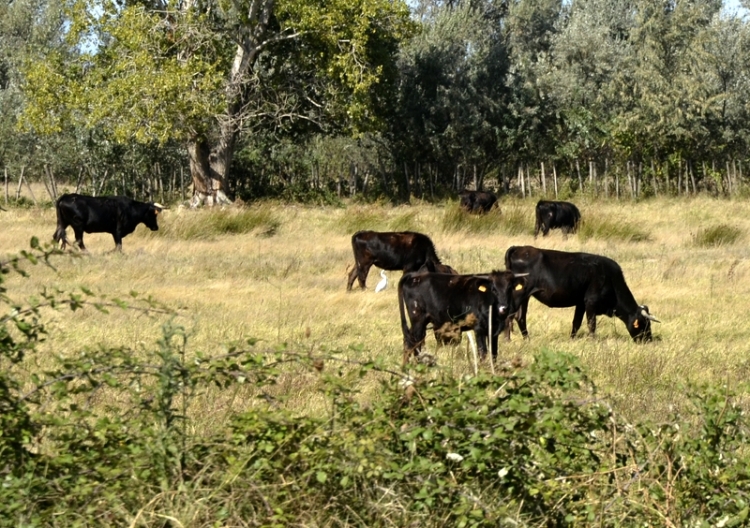 As you can see from the map above, after we left the banks of the Petit Rhone, we turned east and the wind which had been hitherto a friend became a bit of a pest.  We cycled through vineyards planted in the sandy soil and the wind whipped up quite a bit of the sand and threw it into our faces in a manner reminiscent of the fate of the young Charles Atlas.  Soon we were heading down a dead straight road in to 60kph gusts and finding it very hard work.  Finally though, we battled through to Aigues-Mortes and found our hotel, the Hotel du Canal.

Some swallows had got south before us. 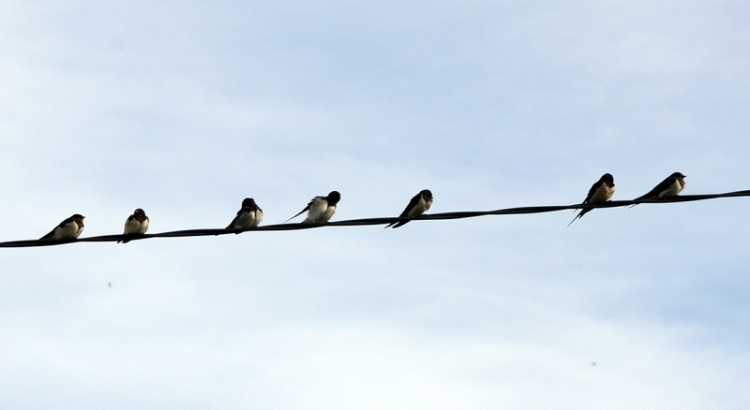 It was aptly named as this was the view from our bedroom window.

…crossed the bridge you can see in the picture and came to another basin with the old town of Aigues-Mortes in the background. 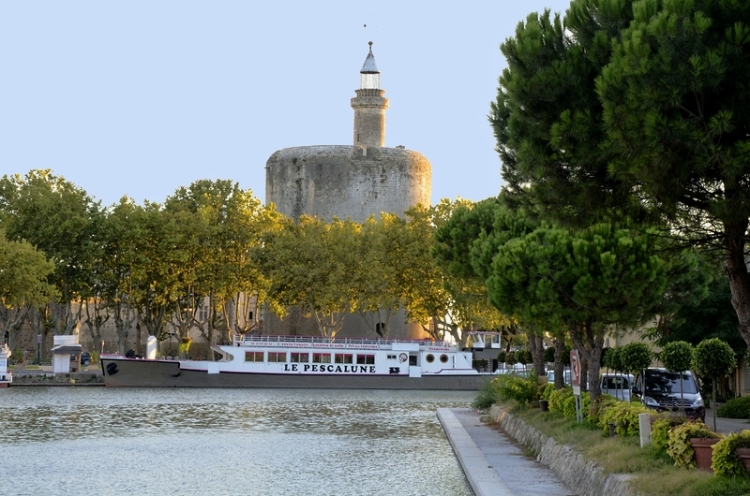 The town is a centre for boat trips on the canals and rivers of the Petit Camargue and we might have had time to take one of theses trips if we had thought about it.

The old town is surrounded by walls.  Big walls. 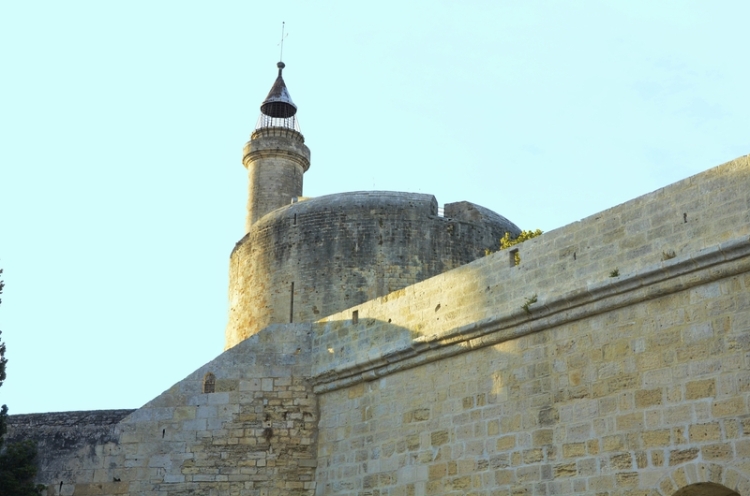 There is a gate in each side…

…and inside, life is surprising normal and even spacious.

We strolled back up the canal and after a good meal in a restaurant near the hotel, settled down for the night.

19 thoughts on “French Trip; The start”